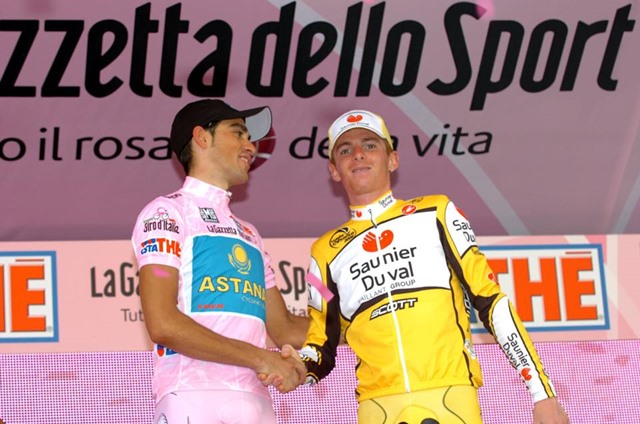 Throughout the history of cycling we hardly find a character at the height of Ricardo Riccò. The eccentric Italian, who recently he was sanctioned for life, is back in the news for his controversial statements about your disagreement with the Coronavirus vaccines.

The “cobra”, which came to be baptized as the new Pantani, was one of the great rivals of Alberto Contador in the past decade.

The Italian, enrolled at that time in the structure of the Saunier Duval, had his best years in 2007 and 2008. Seasons in which with just 24 and 25 years he supervised the best cyclists in the world in races as important as the Tour de France or the Giro d’Italia.

An astonishing ease of climbing, an aggressive style and tremendous explosiveness were his best weapons. The Italian “tifosi” promised them very happy until a first positive by CERA began to destroy the figure of that talented athlete.

After various controversies, paying fines and serving a two-year sanction, Ricardo Riccò returned and did it through the front door. The long period of inactivity seemed not to have taken its toll on him and at 28 years old and the lesson apparently learned, cycling was willing to give him a second chance.

After a brief stint at the Ceramica – Flaminia team, of professional continental category, Vacansoleil opened the doors of the Wolrd Tour again with a two-year contract.

2011 and 2012 should serve to place Riccò again among the greatest, however his return to the top was more than ephemeral.

Just 1 and a half months after signing his new contract and asserting that the second parts were never good, he relapsed again.

The “cobra” was admitted urgently to an Italian hospital after having been practiced at his home, a autotransfusion with blood stored in the refrigerator. A recklessness that was about to cost him his life.

He was urgently admitted to an Italian hospital after having undergone a autotransfusion with blood stored in the refrigerator. A recklessness that was about to cost him his life.

After such barbarism and with obvious signs that Riccò was still obsessed with reaching the top at any cost, his team fired him in an overwhelming way.

Riccò had lost his second chance and the Italian Cycling Federation had no choice but to sanction his brilliant record with 12 years of inactivity. (later extended to a life penalty)

After thirty, and after declaring in a defiant tone that would return with more than 40 to win races, Riccò had to look for other alternatives to earn a living. Not without first appearing in secret in some amateur career.

The “cobra”, surprising as usual, opened an ice cream parlor in Tenerife with her partner. A place called “chocoloco”Which is still open today.

Riccò, who often shows recipes for his appetizing ice creams and cakes on his social networks, has been living his new life for several years, but continues to look askance, longing and still challenging the world of cycling. The obsession with the fame and competitiveness of an athlete taken to the extreme.

Recently and as I said at the beginning of this publication, Riccò made news again for his controversial statements.

The former Italian professional was very critical of the Coronavirus vaccines. A position to say the least surprising for an athlete with his medical history.

“I have read many people who say that the vaccine should be mandatory. We are kidding! I do what I want with my body. Nobody can force me to do something that if it had a negative effect on my body I would be the only one affected.

The Italian settled the issue stating that he was perfectly informed by doctors he trusted. “You can inject yourself, I don’t know what the fuck, but don’t go screwing people, who, like me, are well informed and aren’t going to get that fucking vaccine“