We already have the characteristics of Salomon Predict RA, a model of the “Running Avenue” division, or what is the same: focused on the route. The French brand specialized in mountain sports has long since made the leap to the road, and we already realized this in the analysis of models such as Salomon Sonic RA or Sonic RA PRO.

What we find in this Predict RA of only 260gr in the finish of man and 220gr in that of woman, is a running shoe but for something more than rolling quietly with it. On the contrary, we can include it in the category of mixed shoes, that is, those that serve both to train, and to compete at any given time. 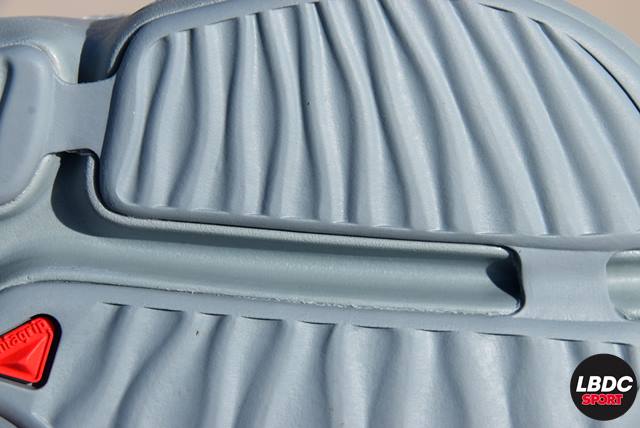 Something that attracts the attention of this Predict RA is the construction of the sole and midsole, since Salomon has created a kind of platforms both to promote foot movement, and to better adapt to the terrain. Because it is not only what is seen from the outside, but also the interior construction, which must be scratched a little (just a little) to see it. This new distribution of the Salomon tread explains it in the search to reduce up to 60% (according to their studies and measurements), the force made by the main joints involved in the foot race such as the ankle, knee or hip. 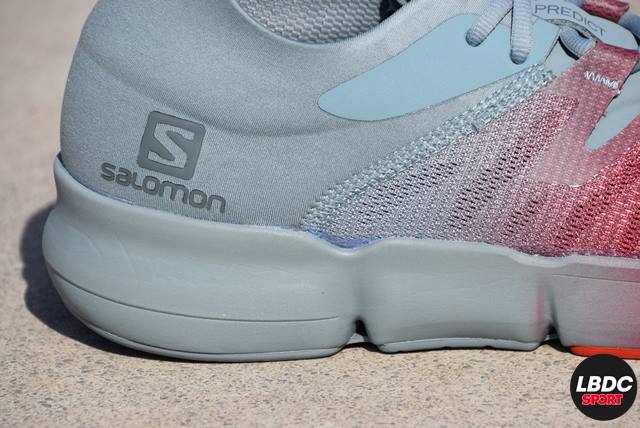 The Salomon Predict RA midsole is constructed with the own compound of the French brand that is EnergyCell ™ +. This material, derived from EVA, not only provides a soft damping, but is also characterized by an optimal degree of rebound, which results in a better use of the energy released by impacting the firm.

This midsole has heights of 25mm from the heel area and 17mm from the front of the foot, which gives a drop (drop, or difference in heights) of 8mm.

But apart from the material or the drop of this Salomon Predict RA, we must highlight the design of the midsole, which is in communion with that of the sole: the distribution in large blocks separated by flex grooves that will favor the movement of the foot . 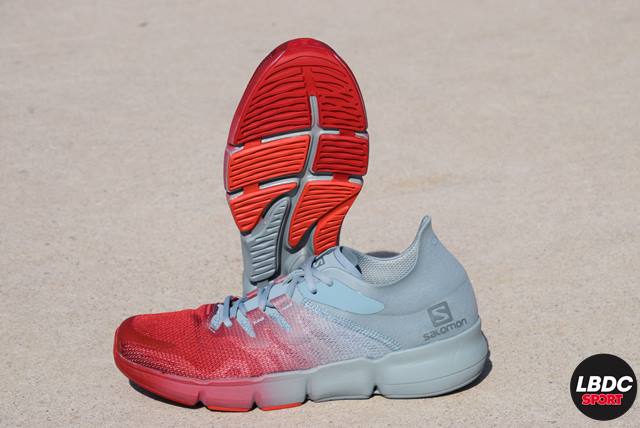 This distribution tries to imitate the anatomy of the foot to achieve a good transition of the footprint since these grooves give rise to independent platforms between them so that, while the impact is damped, it is guided naturally to the foot.

From outside the shoe, the shapes are more or less appreciated, although it seems difficult for me to see the difference to other market solutions. But it is when you remove the inner template to see how Salomon finishes the shoe you discover, through a footbed in grid, this separation in blocks of which it spoke. 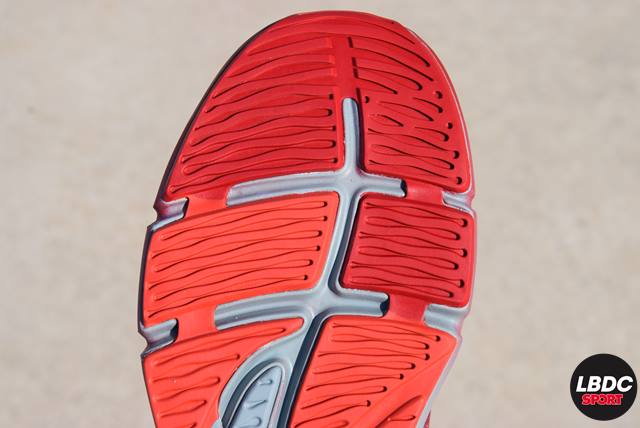 In the sole of Salomon Predict RA we find again, the necessary combination of design and materials in any technical shoe worth its salt. Although in the case of this Predict RA, we go further by the curious relationship with the midsole.

Contagrip® FA: It is the combination between design and materials that I commented and in this specific case for Salomon asphalt. At the design level we talk about flat and short but very wide studs to provide a lot of contact with the ground and improve traction. At the material level, we have to talk that Salomon uses a compound with a good relationship between adhesion and durability. 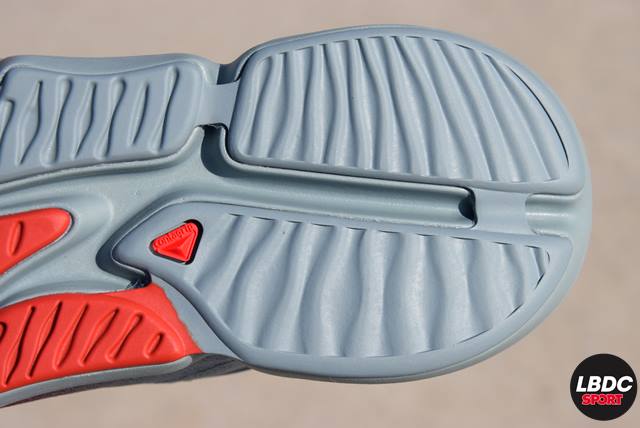 These studs are distributed in up to nine different platforms, depending on the shape of the foot and directly connected with floor from above, where the midsole resides. These platforms move independently between them and adapt to the terrain according to the moment of the tread, making all the phases of it (from hitting the ground until it comes out of the toe), more fluidly.

The grooves seen from the sole correspond to Salomon being inspired by the foot's own joints. The clearest are the grooves located under the metatarsals, directly related to the flexibility of the shoe at this point. 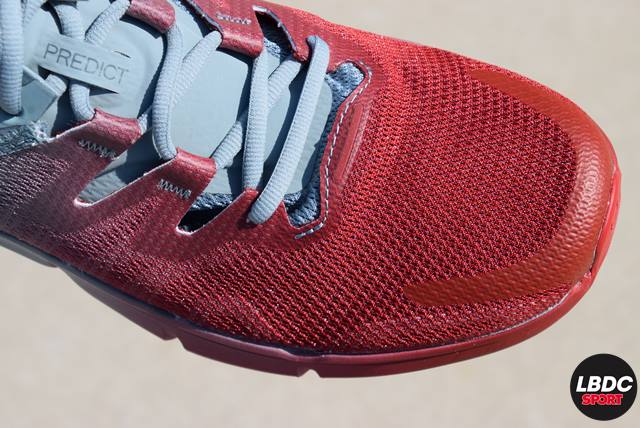 The Salomon Predict RA upper follows the tone of the other two parts of the shoe and has a design that helps hold the foot during all phases of the tread.

A single layer mesh, and more open by the area of ​​the fingers, will allow proper ventilation. The reinforcements of the fingertips are reduced to thermo-sealed synthetic strips (nothing to do with mountain models where this area has to be protected more forcefully). This is one of the advantages of the route, that the saving in protection results in a greater lightness of the final product, and this Predict RA benefits from this. 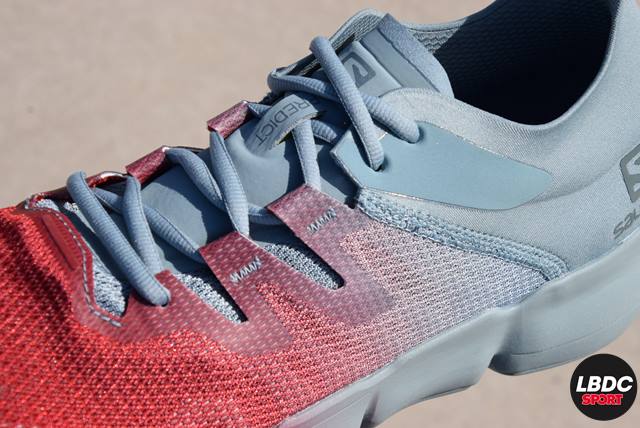 On the other hand, in the middle zone, the level of support must still be important, so there are straps below the mesh that close tightly on the foot at the moment when we tighten the loop (by the way, round and short or long cords). These straps are more or less separated from each other by gaps between the material, which will facilitate clamping regardless of whether the foot is flat as if it is flexed and preparing the next stride.

The heel, of a blunt but nothing caratleta cup, hugs the foot to be directly connected with the last buttonhole of the shoe. On the inside, Salomon has arranged a semi-rigid piece to stabilize the ankle when it hits the ground. 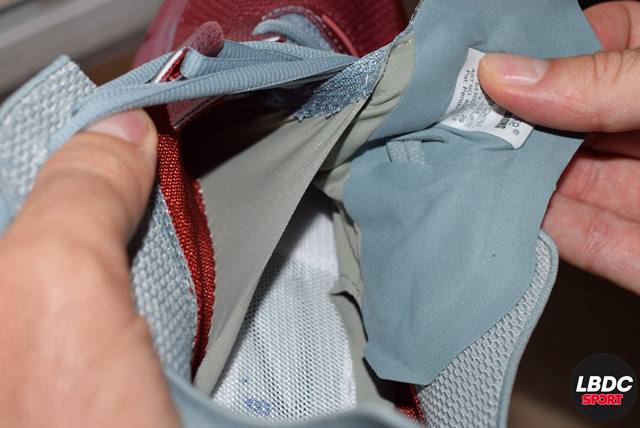 Continuing on the inside, we observe that, although the tongue has a strap so that it does not move during use, it would not really be very necessary because it is semi-attached to the body of the shoe (sewn by the base and with a flexible mesh by both sides). Below, a 4.4mm Ortholite® insole will collaborate in the comfort of use. And if it is removed, the design of the midsole that was mentioned in the previous section is visible.

Salomon Predict RA is a running shoe that Salomon uses exclusively for use on the road. Given its characteristics in terms of design and materials, including its low weight of 260gr them and 220gr them) it must be included in the group of mixed shoes, that is, they serve both to train, as to compete.

The form to which to dedicate it in the training is mainly in the fractional ones or series and, in general all those in which it is demanded to work something more than the simple filming. The ideal is not to have it as the only shoe, but to combine it with others that are specific to daily training. 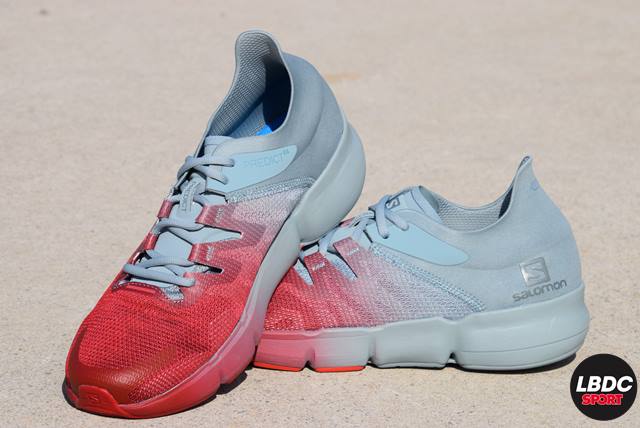 The rhythms to which to use it could be anyone outside the comfort zone of each one. As we have said, when making series, progressions, rhythm changes, etc., and with the possibility of taking it to the Sunday race ..., as long as you do not already have some shoes of the flying group or competition .

Remember that the drop of the midsole is 8mm thanks to heights of 25mm of the heel and 17mm of the forefoot. The price Salomon Predict RA official is € 159.99