Complete analysis of Salomon Speedcross 5, a trail running shoe that if it is characterized by something is to have a high degree of grip and adjustment, two important values ​​when giving cane according to what terrain.

This is the renewal of a model that is gaining an important gap as it combines a lot of strength in terms of race train, with a few important protections. The other grace is that none of this results in excessive weight because the model of man does not exceed 330 grams, while that of women of 280 grams. And is that when you have a piece as robust as this in your hands, it is surprising to note how it weighs less than what it transmits to the eye.

Its aggressive appearance (the tacking is brutal) is actually based on a stylized body. We will be seeing in the analysis, how a first impression of Salomon Speedcross 5 as a sturdy and rough shoe becomes robust, yes, but fine in the forms. 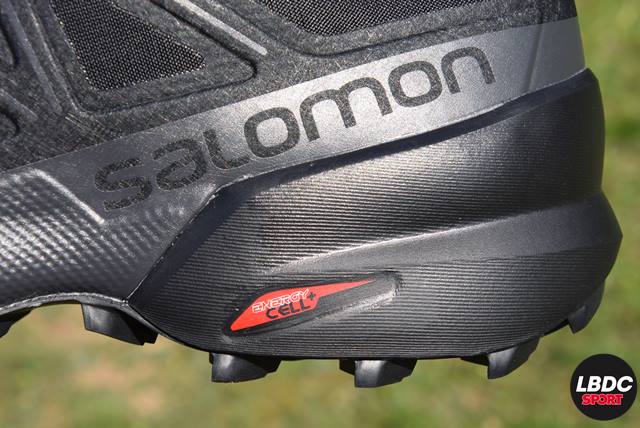 The Salomon Speedcross 5 midsole stands out for using EnergyCell +. This is a technology that allows each step to be cushioned, but also reactivated.

EnergyCell + is a variant of compressed EVA called Compressed Molded EVA (CMEVA). The result is a firm and cushioned compound, although softer in touch than in the past. Its main job is to cushion in a durable way and with a high return of energy.

That the shoe is cushioned attests a generous thickness since the height of the midsole is 30mm in the heel area, and 20mm in the forefoot. This throws a drop (or height difference), of 10mm. 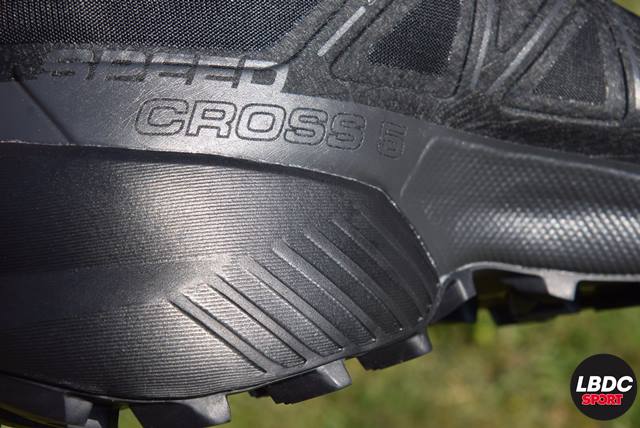 A worthy highlight of the midsole is that it helps in the stability of the heel in a curious way. Anyone who looks at the shoe will see that that area is incredibly reinforced. It is the material of the midsole, which Salomon pushes up to embrace the entire heel and protect it at the time of impacting the ground, providing stability.

It may seem that there is no midsole in the front area but this is not the case as, as I explained before, here the thickness is 20mm. It's just an aesthetic question since Salomon has lowered the texture of the upper to the sole, covering the midsole just at this point. 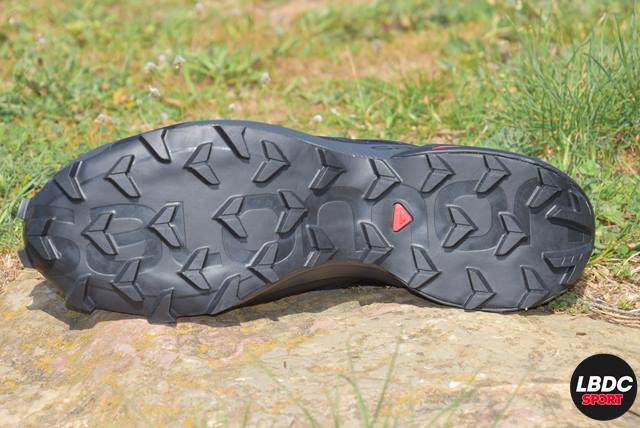 The sole of Salomon Speedcross 5 is another of the star elements of this model. Few tacos, but very aggressive, allow this shoe to work in all types of terrains, but especially in soft and muddy.

The fact of putting few units also favors the detachment of the material that normally adheres to soles, especially mud. On the other hand, they are somewhat longer than in previous deliveries, which allows them to have more impact on this type of surface, precisely. All this is Contagrip® TA, created by Salomon precisely to work with warranty on slippery, soft or very irregular terrains. 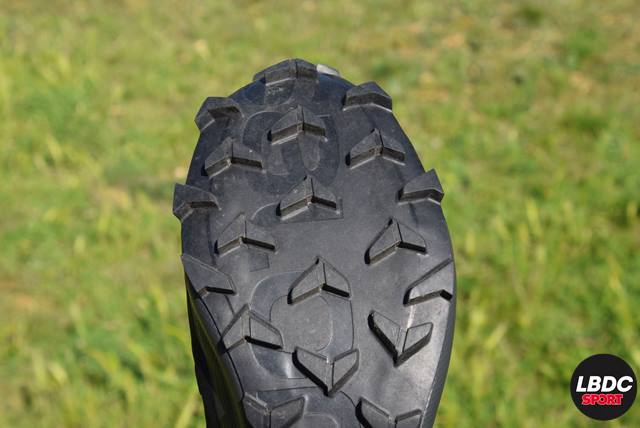 Salomon calls this type of taco "in spike", and although it can hardly lead to confusion, I take this opportunity to clarify a subject: Salomon resembles the taco with that shape, but it should not be confused with the general design of a herringbone sole. used in field sports. The overall design of the sole in Salomon Speedcross 5, as in almost all running shoes, is in waffle, and the specific form that Salomon has given to each taco, that it has done in spike. 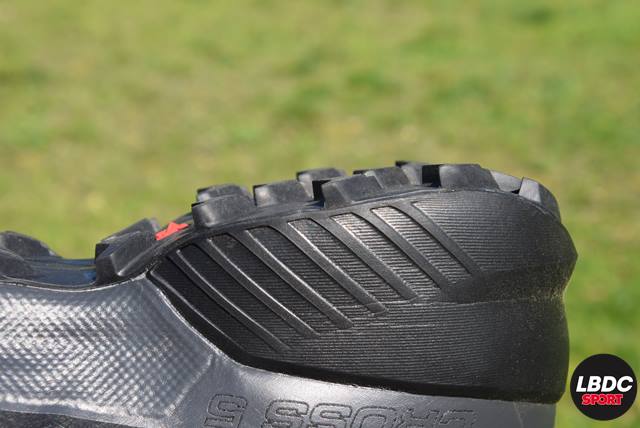 And as expected, the tacos located in the back are placed upside down, in contragrip (do not confuse with Contagrip®), to help a better grip on the descents. 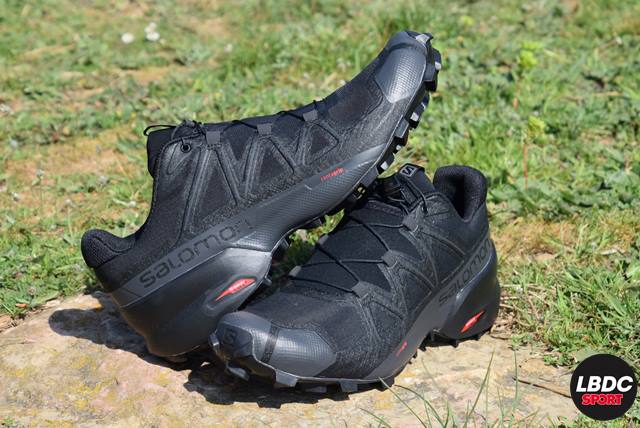 The upper of Salomon Speedcross 5 is redesigned and it shows that the French brand has strived to achieve a more comfortable combination of elements.

From the outset, it must be said that the mesh is breathable, but the weft is thin enough to protect it from dust and small grit. It has all its parts thermosealed to avoid the use of seams, although in reality, mesh surface is seen little since the profusion of reinforcements cut out the surface of action. Already only the spectacular reinforcement of the toe, cut a few millimeters more mesh than usual in the area of ​​the fingers. 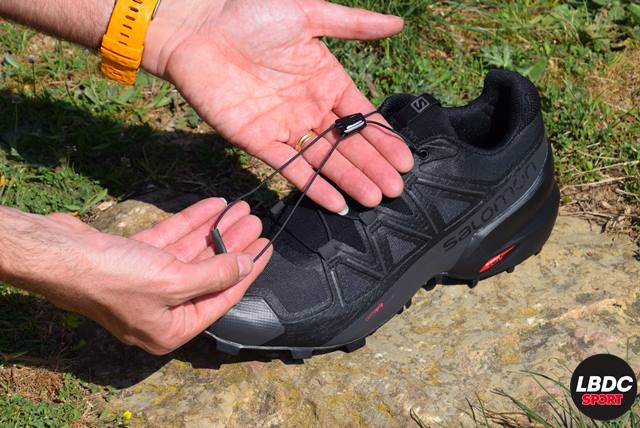 At the level of subject we find SensiFit ™, which are those side strips that are born in the midsole, topped by the eyelets and that are closed on the foot when fixing the laces. The tips are sufficiently separated so that they can individually tighten each moment of the tread. Three strips on both sides plus a buttonhole at the top make a total of four eyelets for the interior and the same for the outside, one less than what we saw in Salomon Sense Ride GTX Invisible Fit. 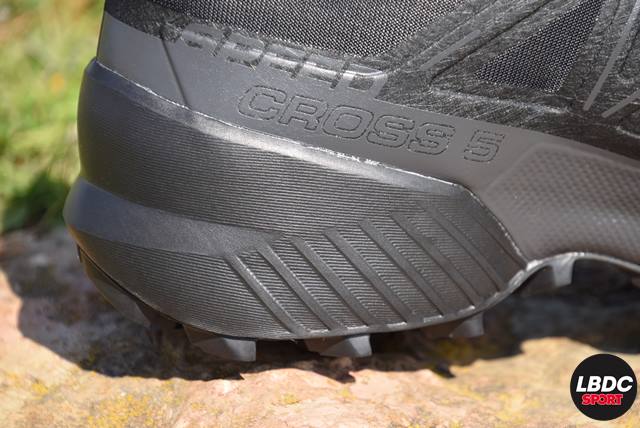 When I mentioned "fixing" the cords and not knotting them is because they use the Quicklace ™ system, as in the aforementioned Sense Ride and also in Salomon Ultra Pro, for example. With Quicklace ™ there are no longer loops but a pin is used to obtain a pressure closure.

You have to pull the cord while keeping the pin open and, when we think we have the right tension, we let the pin go and the cord is fixed. The tongue incorporates a pocket where this pin fits perfectly and the excess of the laces, so not only does it not bother, but it reduces to zero the possibility of snagging on any branch or small bush. On the inside we find a padded Ortholite® 5mm® insole that will provide extra comfort. 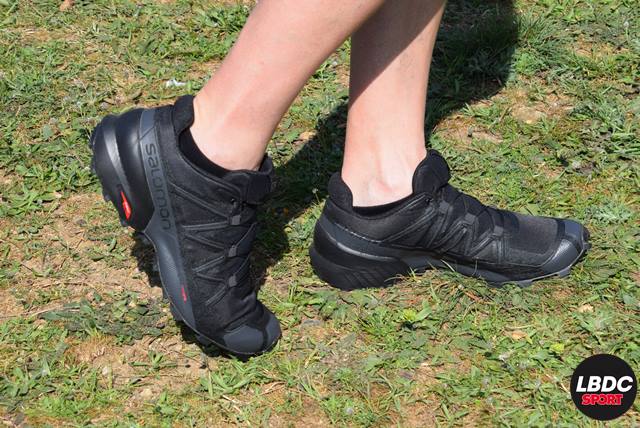 In the heel I repeat what was explained in the midsole: it is absolutely protected and stabilized thanks to the fact that from the midsole Salomon has raised the cushioned material up to embrace it, thus avoiding adding another type of rigid materials usual in other sneakers.

Having a Salomon Speedcross 5 in the hands of entry makes you think two things: it has an aggressive design and perhaps penalizes in comfort. Well, yes and no, no.

Regarding the comfort I have to say that it has been one of the surprises of the season. Infinitely better than I could think. I have used many models, also from Salomon, and although they go well, always for one reason or another you remember that you wear them. With Speedcross 5 I only think when I put them on and when I take them off, it's that simple. From the outset they embrace well at the foot, first, new lasts, without they have yet adapted to one. And then, when you go out to run, keep on catching up, go down, go for simple places, technicians, dogs... The level of comfort that I have found in this shoe has been very good. 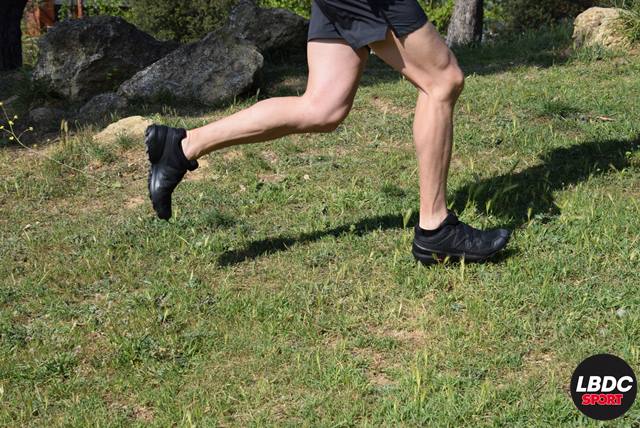 Regarding the aggressive design ... it behaves as what it appears. This shoe dares with all kinds of terrain where I have gotten. He has obviously answered me for the easy ones, but also for the more technical ones, whether it is big rock, small, loose, jumps, sliding gravel ... I'm going (because I'm still using it) from the cochinero trot to everything my legs and legs give me. zapa tilla always responds. It weighs 330gr but it is not the sensation that transmits, it seems lighter (eye, it only seems, we do not either). Good response in the supports: not a fall in the locker and that I'm melting this shoe beyond the test itself. 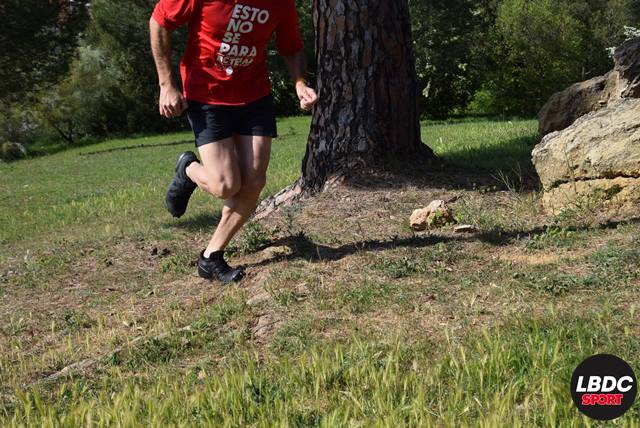 I have noticed it very flexible and adaptable, as illustrated in the photo I accompany (I level the ground raised by a large root under the ground) and where you can see how the shoe flexes and adapts to the contour with such a thing.

Salomon Speedcross 5 is a trail shoe that we can use both to train and compete. Its design allows it to be used in all types of environments, but undoubtedly, those where it can sink its spectacular tacos, such as the soft or muddy, will give their best performance.

Thanks to the reinforcements, cushioning and comfort of use, they stand as a great option for medium and long distances, especially for those who have an average weight.

The only downside that I have found is that both reinforcement penalizes breathability. Not that there is not, but it is something minor as a result of the use of useful reinforcements but that steal space from that mesh, moreover, more dense that incorporates. 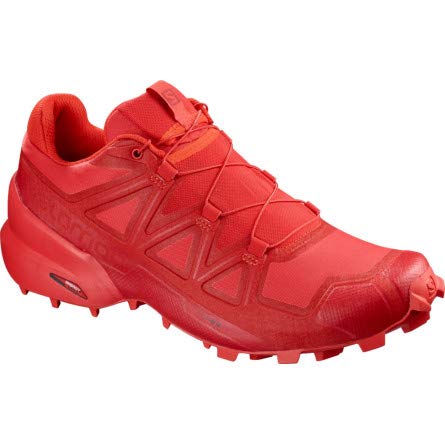