We analyze one of the most popular models of the mixed segment of Saucony: Kinvara 11. This new edition follows in the footsteps of its predecessors, obtaining one of the lightest mixed sneakers of the market, specifically 233 g. and 200 g. for men's and women's shoes respectively.

In this new installment, Saucony replaces the EVERUN and EVA + of the midsole of Kinvara 10 and gives way to PWRRUN, in the same way that I did with many other models of this North American brand. The upper is built with technology FORMFIT, which brings a feeling of freedom and lightness, adjusting without stress the entire foot.

A model that will surely continue to retain those who have already tried previous editions, for their lightness and versatility, since these neutral shoes are worth to train at controlled rhythms, series, fartleks or the competition itself. 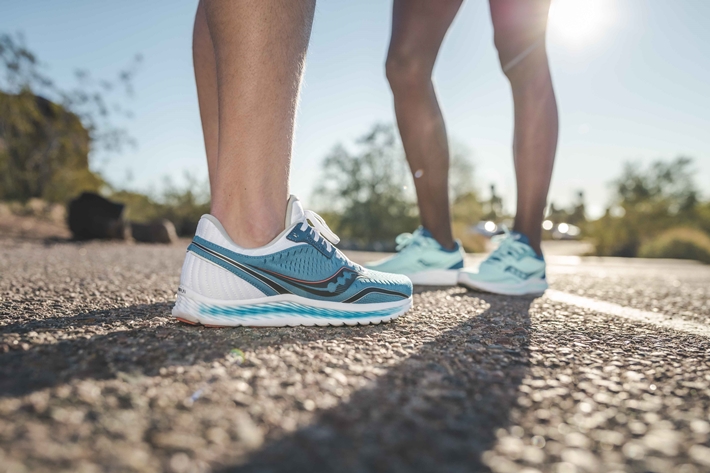 As in other Saucony models, the novelty lies in the construction of the midsole with a new component: PWRRUN, material that arises from the combination of EVA foam (Ethyl vinyl acetate) and TPU (thermoplastic polyurethane). Extremely light, it improves durability and flexibility, providing the necessary cushioning, while giving a quick and light response. Inside, under the removable template, we find another flat and thinner glued directly to the base. It is made in PWRRUN +, a foam even more cushioned, light and flexible than the PWRRUN and that will give a plus of comfort and softness allowing a more fluid footprint. 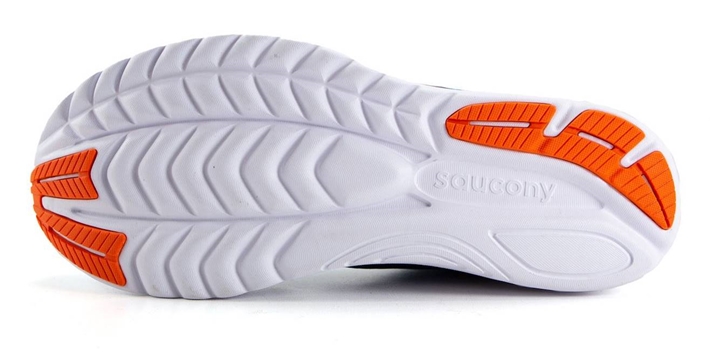 The design and layout of the sole of the Kinvara 11, reminiscent of that of version 10. Same pieces of rubber in heel and toe, plus a large part of the sole exposed. In this “naked” part, the edges of the tacos are more rounded than in Kinvara 10.

In any case, the design TRI-FLEX It offers the same functionality, dispersing the force of the impact phase over a larger area, to provide more flexibility and quickly move from the landing phase to the takeoff phase. In short, to obtain greater reactivity. 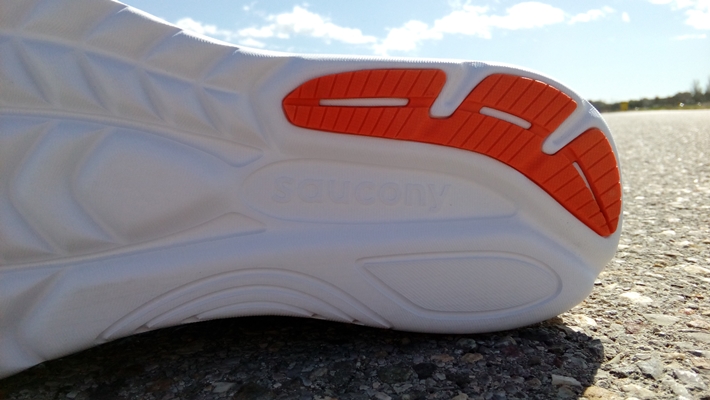 The pieces inserted in the heel and toe are made of a more resistant rubber. They are strategically located where the shoe is needed to have more durability, because they are the parts that withstand the most wear. The heel, being the area of ​​first impact, and in the toe, being the last part of the shoe that contacts the ground, in the impulse phase, which also needs more traction. 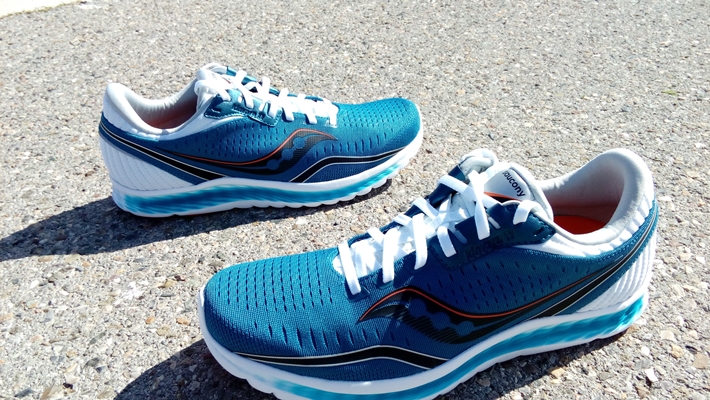 As usual in Kinvara, version 11 continues with a very light and flexible mesh. Saucony uses technology here FORMFIT which is responsible for the upper cut to fit the entire contour of the foot, relieving tension. It is formed by a double mesh that wraps the foot, where there is a breathable outer layer with some ventilation holes, somewhat smaller than those with version 10. 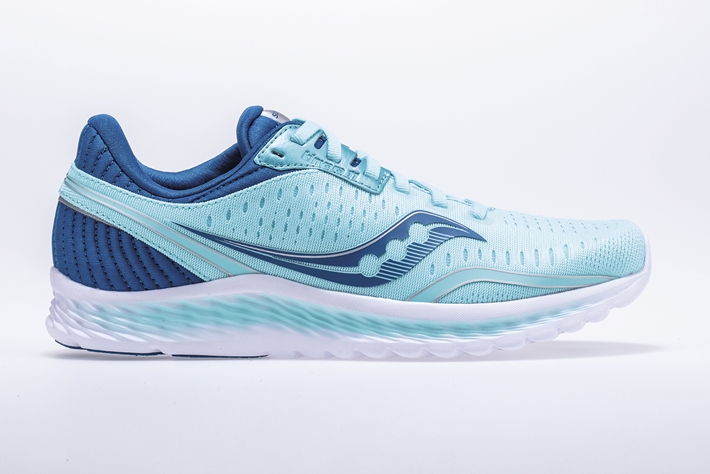 A more closed hatch by way of reinforcement protects the toe, which together with some heat-sealed seams spread over the mesh plus the large logo of the brand located in the outer middle, give a little more support to the upper. From behind it incorporates a contratacón with rigid structure to firmly hold the heel, which in its elevated part (more flexible) protects the Achilles tendon. Outside reflective details have been placed. 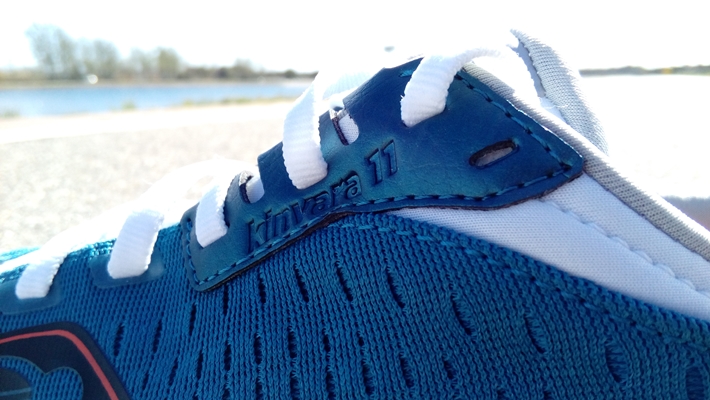 As for the laces (they have a flat shape), they run through eyelets (also flat). There are six eyelets plus the extra. It should be noted that reinforcements have been added in the last four where, mimicked, there is the inscription "Kinvara 11".

As for the interior, say that the amount of padding on the tongue has been increased, though, keeping it attached to the body of the shoe, to prevent it from moving. In the heel if the inner lining has been reduced somewhat with respect to the Kinvara 10, although it is still generous and comfortable.

The feeling of comfort as soon as you wear the Kinvara 11 is very tangible. The FORMFIT technology used in the upper wraps the foot and the internal heel and tongue padding gives a feeling of “coat” and fit that allows freedom of movement of the foot without any pressure.

As soon as we begin the march this comfort continues and the adjustment of the foot and freedom of the fingers remain intact. They have not given up the laces, tied in double laces and the shoes are well adjusted. 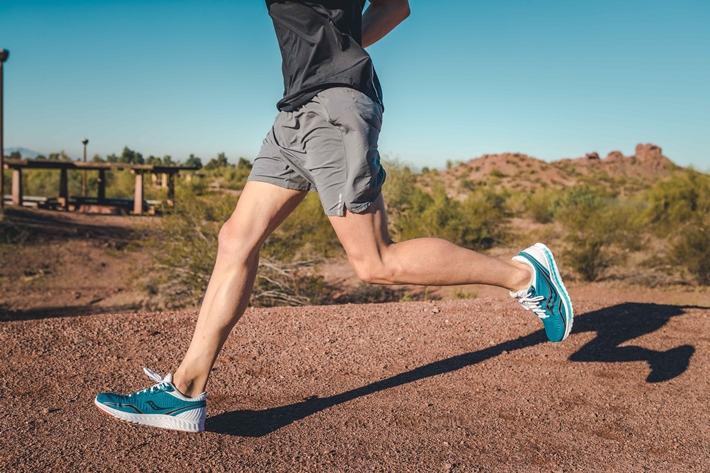 As for the flexibility of the shoe is already perceived during the first kilometers, starting a smooth march, around 5 'per kilometer, but this becomes more present as we increase the pace and leave between 4'30 ” and 4 'the kilometer and even something below 4', obtaining a rapid transition and response / reactivity.

It is not a top-of-the-range cushion shoe, but the one it has is more than enough to do fast workouts, in addition to not feeling that it is a shoe that is too hard, even if it seems a priori.

The grip is very prominent on firm ground like asphalt and the configuration of the sole makes it very flexible. Although the uncovered part (the areas where the reinforced rubber parts are not) suffer more wear and possibly do not have the durability of the typical training shoe, but of course, this shoe is made for specific training and the competition itself. To make long runs would be more advisable some shoe with some more cushioning and a sole with more rubber surface.

In short, the Saucony Kinvara 11 It is one of the TOP sneakers of the mixed segment. I mean, very versatile to perform workouts to controlled rhythm, series and competitions. Sneakers neutral focused on light / medium weight runners. his 4 mm drop and its light weight These are some other characteristics of these shoes that you will surely enjoy if you go to live rhythms. In addition to being very comfortable and the feeling they give is as if you carry almost nothing. 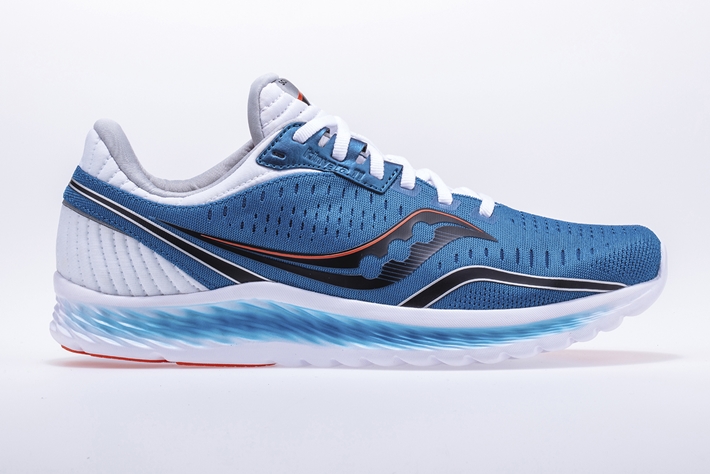