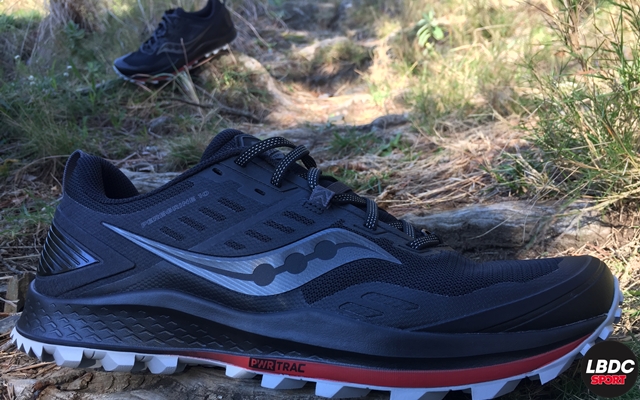 We analyze one of the models of trail running most representative of Saucony, Saucony Peregrine 10. With this new shoe from the Run Anywhere collection, the American brand, founded in 1898 in the US state of Pennsylvania, and based in the city of Cambridge since 1910, ordinally renumbers the Peregrine model, after it was last done with version 8. This of numbering the shoes is a custom that the American brand has recovered after using “ISO” in recent seasons.

Precisely the previous version (ninth) was called Peregrine ISO, name given by the technology used in the adjustment of the upper of the shoe. Going back to the Peregrine 10, say that they are lightweight, cushioned and versatile shoes that will work very well on any type of rough terrain, especially if it is wet and muddy. 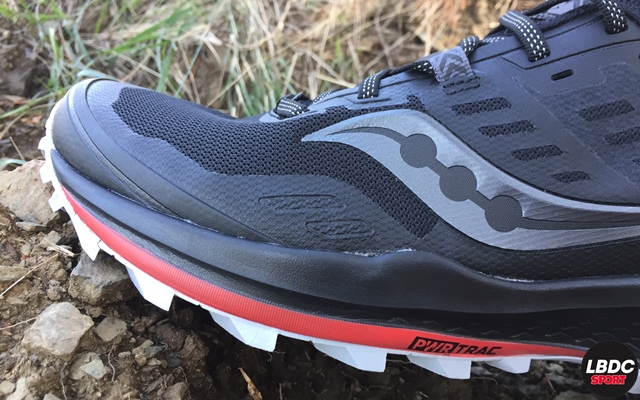 One of the most significant changes of the new Peregrine 10, is the material used in the midsole. Change the EVERUN of the previous edition, by PWRRUN. This EVA foam material, lightweight and with cushioning properties, is symmetrical on both sides of the shoe, hugging or introducing a little in the upper part through the middle part and thus obtaining some more stability throughout the whole. Small notches distributed around the midsole from the middle part and wrapping the heel, have the function of compressing to help soften the impact with the ground.

As for the dimensions, say that it has a heel height of 27 mm. by 23 mm. from the front, which gives us a drop of 4 mm., maintaining it in the same way as in the ISO version.

Under the inner template and glued to the base (although easily removable), there is a thin layer of PWRRUN +, a foam even more cushioned than the PWRRUN and that will give a plus of comfort and softness in the foot-shoe-ground contact. 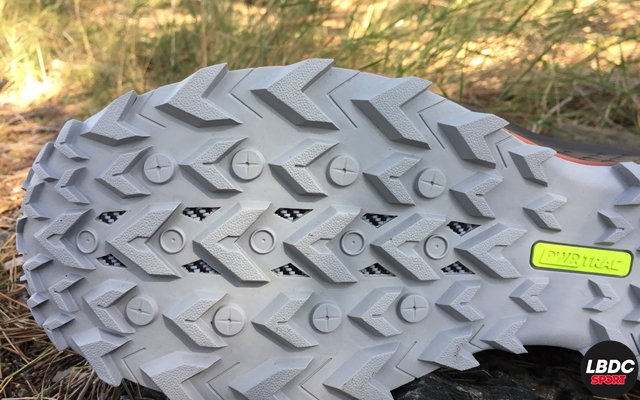 The dominant component in the sole of the Peregrine 10 is an adherent and abrasion resistant rubber called PWRTRAC. The distribution and position of the multiple blocks, in the form of "V" or also called ChevronIn addition to giving the sole an aggressive appearance, they indicate that they will have good grip and traction. In the front part, five rows of these tacos facing forward are the ones that will allow precisely that the shoe grip and pull well, especially when the ground “itches” upwards. On the contrary, the four rows of heels in an inverted position of the heel part will facilitate more control and safety in the descents.

The separation between the studs in the entire length of the sole and the depth of these (5 mm.) Make these Peregrine slippers that will surely go great on muddy terrain. Although if you want to go through much softer terrain, the ideal is the Saucony Peregrine 10 ST (Soft Terrain), with greater depth and spacing between tacos. 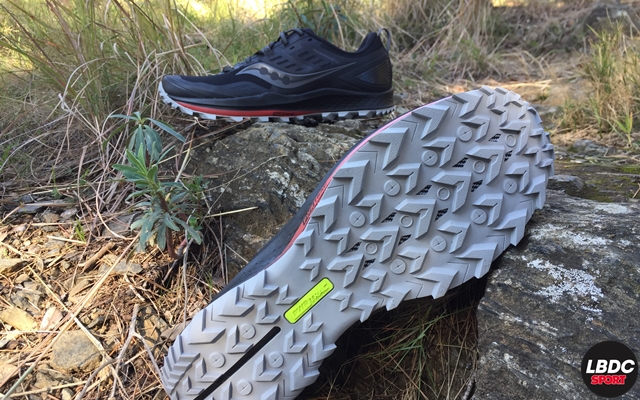 Another feature of these shoes, is the possibility of housing nails or screws to run on surfaces where an extra grip is needed, either in areas with a lot of mud and even snow or ice. To install them, it is only necessary to place them and tighten them on small dowels (specifically there are twelve) where there is a small incision that will serve as a guide. Five other brands will serve as a template in case we want to drill some water drainage holes.

An anti-rock plate housed in the midsole, but visible from the sole through windows, offer additional protection. 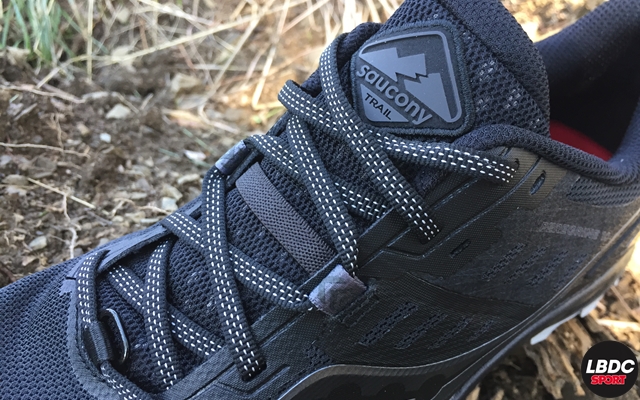 The upper of the Peregrine 10 has also been modified with respect to the previous version. The ISO adjustment system disappears. Instead, it uses different traditional reinforced eyelets, plus two tensioners incorporated in the central part. In addition, to the last two eyelets, another two somewhat lower ones are added, to adjust the shoe more in the instep area. 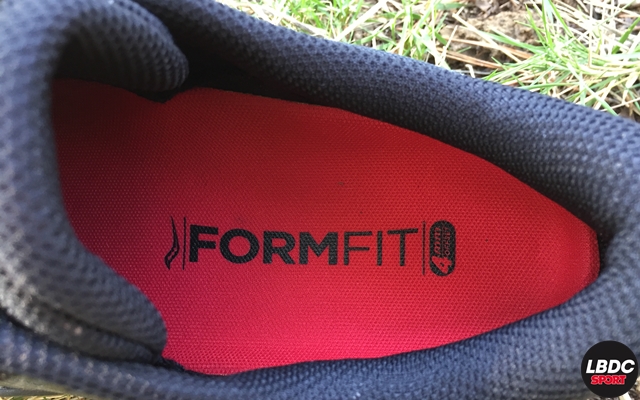 FORMFIT is the technology used in the upper, giving an efficient adjustment and holding the foot on any irregular terrain. The different heat-sealed reinforce and protect the foot of any element (stones, branches ...) that can impact the shoes, especially on the toe (where the reinforcement is thicker) and lateral.

A firm and rigid countertop helps keep the heel secure, which incorporates a handle to adjust or fit the shoes more comfortably and quickly. The interior is padded and the tongue is attached to the body of the shoe to give more adjustment and prevent it from moving towards the sides. 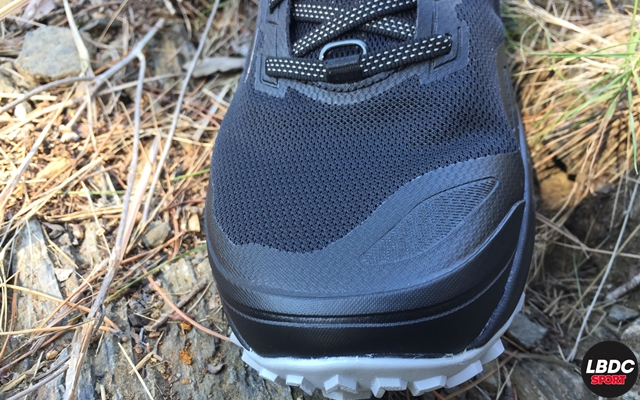 Also the tongue incorporates an elastic strip, where to pass the excess loop once the shoe is tied, so that the cords (thin and flat) can not be hooked with any branch and are well stored.

Another element to take into account is the incorporation of a small ring at the base of the tongue, in the same pin where the cords slide. This ring facilitates the placement of leggings, if they are required by running on surfaces where the feet should be protected more, either in areas of a lot of sand or snow. 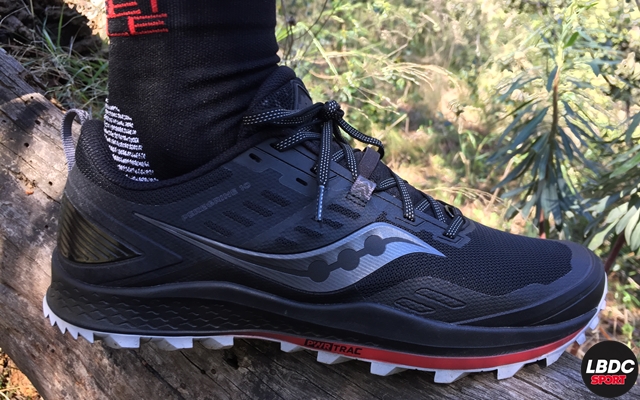 It looks like a somewhat stiff shoe at the beginning, but after making some off road outing with the Saucony Peregrine 10, that perception of stiffness decreases. Pleasant feeling of softness and cushioning for any type of terrain. Versatile They are not slow on land tracks and you can print a good pace, however, for more irregular terrain and with slope, whether ascending or descending, it is where I have found more comfort and where I have taken advantage of the qualities of the shoes.

They grip well on any rocky surface and softer terrain, and lowering slopes allow you to control / brake well without speeding if we don't want to. The protections of the toe are going well when some not very large stone impacts on it, protecting the foot of different blows.

It is somewhat narrower than the Saucony Peregrine ISO, and until there is a little, the pressure on the foot may seem a bit suffocating. The Wide version may be a solution if you need more amplitude. 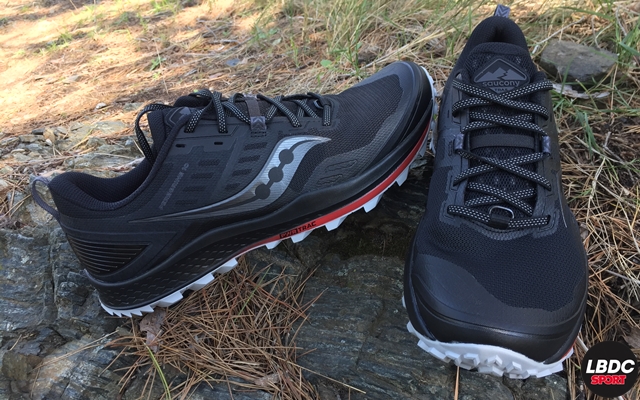 Saucony continues betting with the Peregrine model, as a versatile training shoe, for use on any type of terrain and weather condition. Version 10 returns to the traditional setting, leaving behind the ISOFIT system of the previous version, but maintaining an effective hold.

Keeps the same drop of 4 mm. than in previous versions and a damping with technology PWRRUN Nothing despicable that will keep the runner fully protected. The sole PWRTRAC It will allow you to run on almost any type of terrain. The weights are 303 g. and 264 g. in male and female models respectively.

The Peregrine 10 also have the Wide version, a bit wider for those who need is more amplitude.