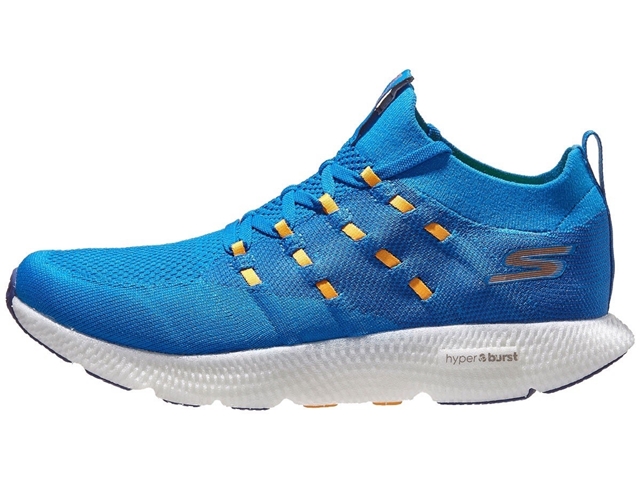 Skechers GORUN 7 are neutral training shoes, included in the line GORUN from the collection Skechers Performance. Very light (212 g. In 9 USA for men and 176g. In 8 USA for women), a characteristic common to all running models of the North American firm. For this seventh version, Skechers replaces the previous midsole component, - FLIGHT GEN - for the novel Hyper burst, which already includes other models of the brand. This new material, much lighter, significantly improves cushioning and response, compared to previous installments.

The upper is the area that undergoes the least changes, if we compare it with the GORUN 6, since it uses Knit material as a sock for the construction of the entire upper cut. Clean and without any seams, this is the design of this Skechers GORUN 7, and which we will analyze next. 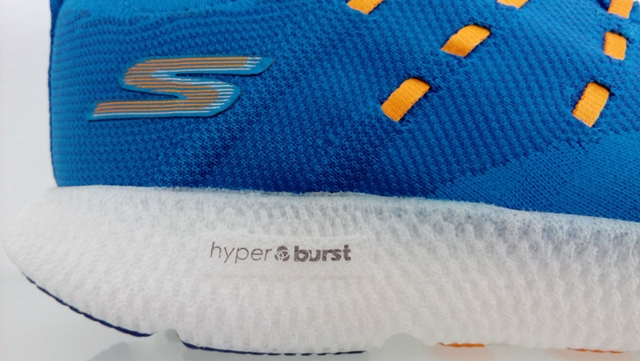 The entire Skechers GORUN 7 midsole is made from the same material: Hyper burstTM cushioning, which is an innovative very light compound. This foam is created by a chemical process called "Super Critical ”. This process consists of injecting CO2 in a small piece of EVA foam, which expands and increases in volume, obtaining a considerably light and very resistant material, which also offers great durability and responsiveness. Another technology used in the midsole and that has been used in Skechers shoes for many years is the M-Strike (Mid-foot-strike). This type of curved sole favors an impact with the midfoot, promoting a more efficient stride. 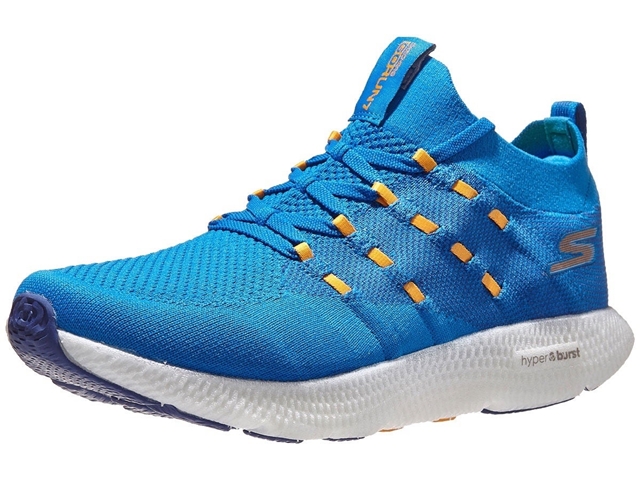 The drop of the Skechers GORUN 7 continues to be 4 mm., And although it is low (characteristic of a natural Running shoe), the thickness and amount of material used in the midsole allows it to be used by all types of runners. Still, it is more favorable for those who already have a good running technique and enter metatarsus, or want to start with a better running technique. Specifically, the profile of the shoe is 15 mm. height at the front by 19 mm. on the heel. 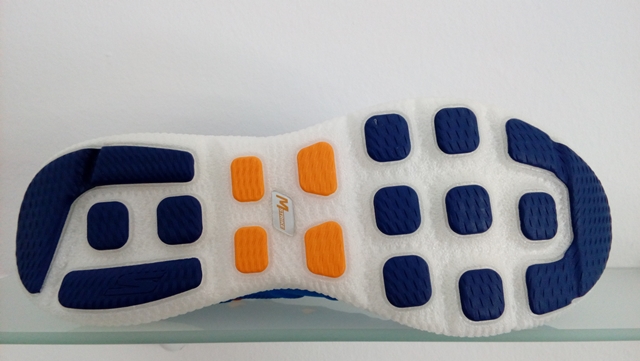 With an original sole, Skechers GORUN 7 directly inserts a series of small capsules of blown rubber based on the midsole of Hyper burst, creating spaces between said surfaces that serve to have greater flex and smooth transition. 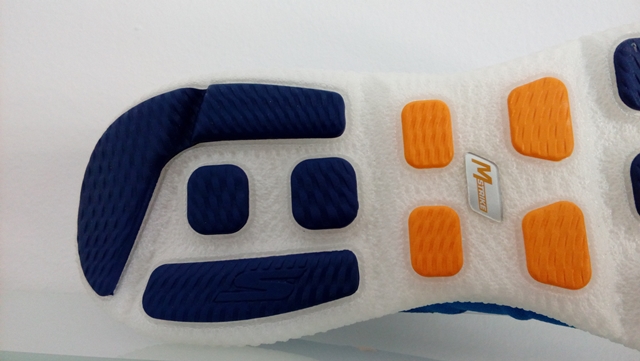 Looking at those small rubber areas, we distinguish two colors, blue and orange. The blue, arranged in four pieces of contact in the heel (two larger and two other small) and eight pieces in the front (seven capsules, plus two others attached to a larger surface on the toe) serve to retain the impact and transmit the subsequent traction. They are made of a harder and more wear-resistant material than orange, which is located in the center of the shoe. The orange studs, distributed in four points, are softer, to soften the footprint. 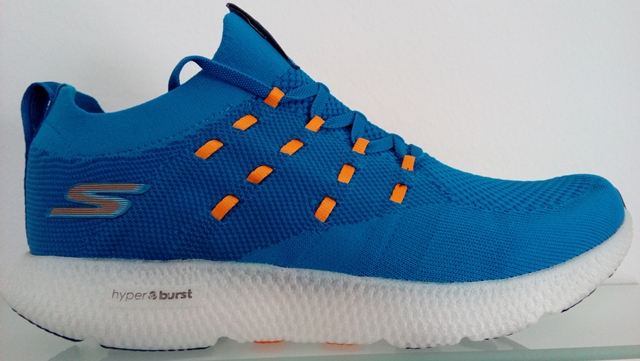 If we compare the upper cut of Skechers GORUN 7 with that of GORUN 6 there are small changes, although they are very similar. Maintains a fabric structure Knit circular in one piece, as loot. This type of Knit mesh is elastic on the instep and neck of the shoe. It is also very breathable.

This fabric is more or less reinforced, or with more or less volume, depending on the function you need to cover in knit in each part of the shoes. This will give more fit, stability or freedom of movement.

The neck has an elastic mesh that adjusts to the ankle, while the mesh on the outside of the heel is more reinforced, to protect the calcaneus and ankle. The internal part incorporates a padded panel that provides greater comfort and fit.

The knit on the sides of GORUN 7 and the toe area is tighter to reinforce the areas most sensitive to possible tears due to chafing, while, on the other hand, the fabric used throughout the upper part is more open and elastic , molding to the structure of each foot. 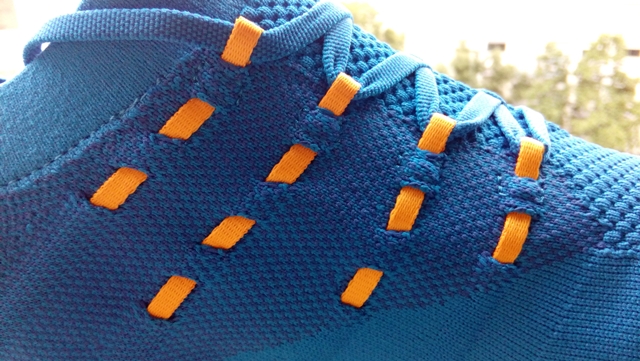 The lacing system of the laces is integrated into the same one-piece knit and the flat laces pass through eyelets that are anchored to the base of the upper (in orange), pulling them we will give more or less tension to adjust the shoe at the foot. 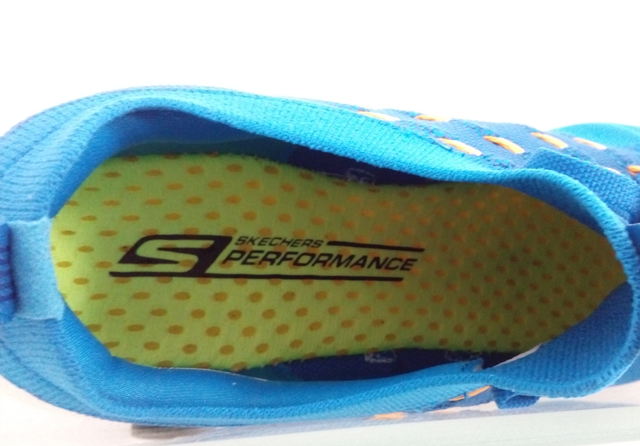 The sneakers also incorporate a removable insole. The one that is inside is sewn to the body of the shoe and with a good padding, soft and comfortable. By lowering the total height a little, it allows you to have a little more proximity to the ground.

Another detail to mention is the rear loop that facilitates the shoe. In the same way, we have another handle on the tongue, where the inscription of the model of this Skechers shoe is: GORUN 7.

Skechers renews its model GORUN. This GORUN 7 has a upper similar to that of GORUN 6 although with some small differentiating detail. Formed by a single piece of knit as a sock. A neutral and very light daily use training shoe, for runners of any type of weight who have good running technique or want to start in it.

Due to its great lightness, it also allows for higher quality intensive training. And thanks to the new lightweight midsole structure with new technology Hyper burstTM cushioning Provides great cushioning with a very good response.

The drop of 4 mm., along with technology M-Strike, favors the impact of metatarsus, hence what he said about the running technique.

100% recommended shoe on asphalt, since the arrangement of the different pieces of rubber give a good grip on that type of surface. It does not mean that it cannot be used in parks with pressed earth, but the grip and the sensations are not the same as on the asphalt and, above all, the dirt causes the soles with less amount of Caucasian to wear out earlier. 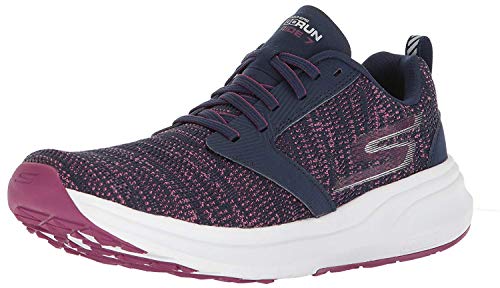