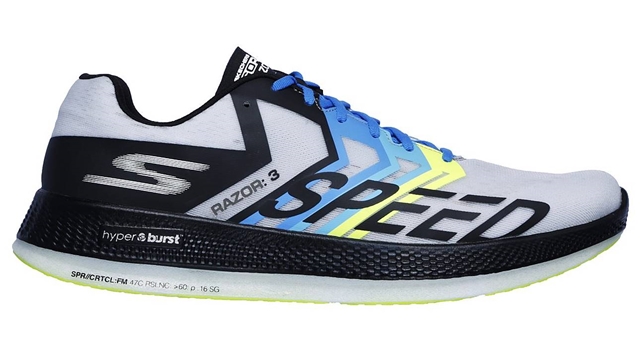 We analyze one of the shoes in the segment of training / competition from Skechers: GOrun Razor 3 HyperTM. Model included in the collection Skechers Performance, in which the North American brand divides it into three different shoe lines: GOrun, GOrun Ride and GOrun Speed, being the latter where we find the GOrun Razor 3.

The main characteristics common to all running skechers are: the concept of natural running, the use of medium / low drops and the great lightness of each and every one of its different models. And we can say that this third version of Gorun Razor, turns out to be one of the lightest running shoes from Skechers, specifically 181 grams. 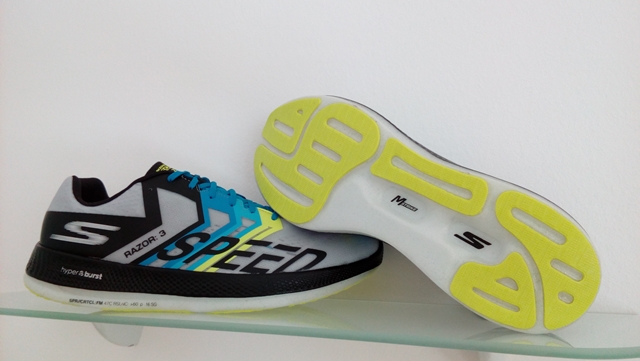 Includes numerous technologies, including innovative foam Hyper burst of the midsole, which through the process Super Critical FoamTM Get a versatile, light and fast shoe with good cushioning and great responsiveness. 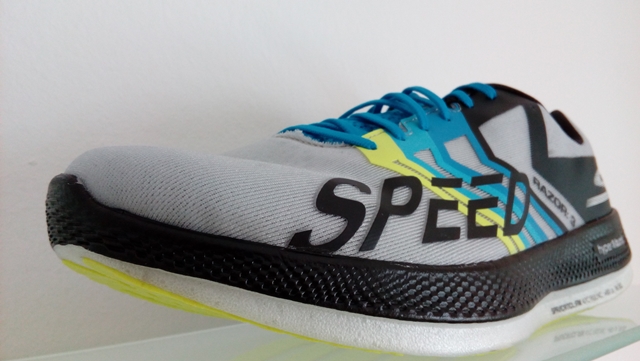 As we said in the introduction, the midsole of the Skechers GOrun Razor 3 is made entirely with an innovative very light foam called Hyper burst. This foam is created by a chemical process called "Super Critical ”, which through CO injection2 In a small EVA foam platform, it expands resulting in an extremely light and very resistant material, offering great durability and responsiveness. 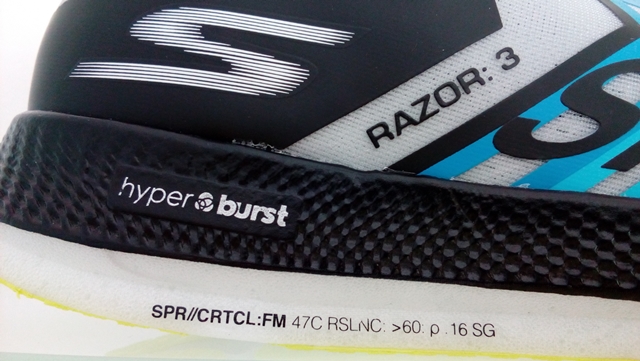 Specifically, we have a series of data inscribed in the midsole that details the characteristics of its composition: SPR // CRTCL: FM 47C RSLNC:> 60:  .16 SG, being its meaning: midsole manufactured by a process called Super Critical Foam, with a hardness or firmness of 47or, a resilience greater than 60%, which is the memory capacity of a material, in this case the hyper burst, to recover its initial state after contracting, and a specific gravity (Specific Gravity) of 0.16 g / cm2 density ( ), which is the comparison of the density of the material (hyper burst) with that of water.

Another of the technologies used in the GOrun Razor 3 midsole and which is already a classic in Skechers shoes is the M-Strike (Mid-foot-strike). This type of curved sole favors an impact with the midfoot, obtaining a more efficient stride.

High profile shoes, although with a drop of 4mm., Characteristic in this type of Skechers models.

The Skechers GOrun Razor 3 outsole has a minimalist cut: it does not protrude more than a millimeter in thickness, with different strategically placed rubber blocks that provide durability and traction.

Specifically, there are five blocks, two of them located on the heel, where the rubber (solid rubber) is harder to give more resistance to that part, another located on the outside of the midfoot and two last blocks located on the metatarsal, more soft and that facilitate traction.

The rest of the rubber-free sole reveals the Hyper Burst foam in the midsole, and where we can see the name of the technology screen-printed M-Strike and the logo S from Sekechers. 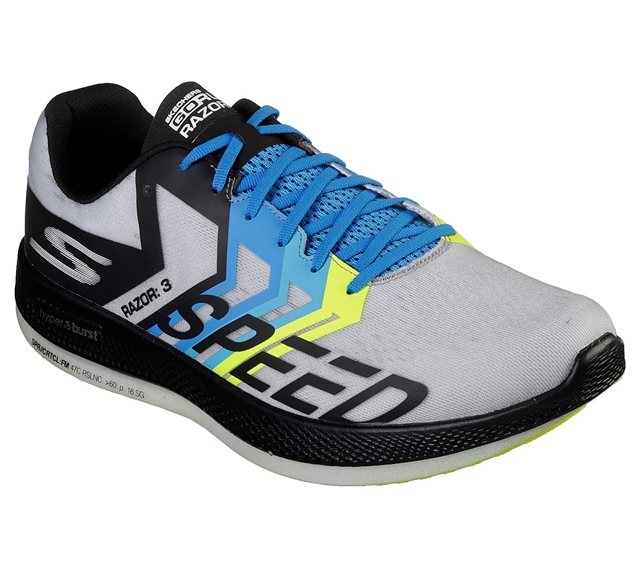 The upper of this GOrun Razor 3 is made entirely of mesh Rishop translucent and very resistant, without seams for greater comfort, and providing good support and breathability. Different graphic motifs printed in 3D, will give more adjustment to the whole of the shoe, placing these different spaces. 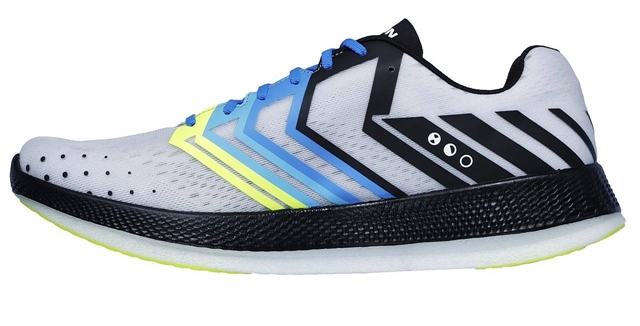 In the middle of the foot and on both sides, we find some straps that go from the eyelets of the laces to the midsole. On the outside the word print SPEED, realizes that it is a shoe included in the line GOrun Speed, and that the italics of this form give a clear manifesto that these shoes transmit speed. Other 3D-printed brush strokes are small reflective dots, fourteen specifically, located on the inside of the toe box. Also printed a great logo S of Skechers and the model after which the shoe is named: Razor: 3. 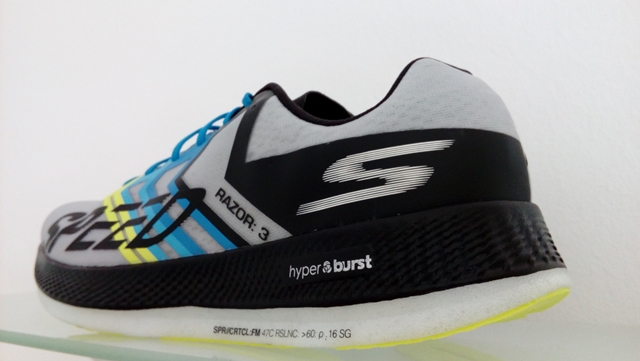 The heel counter is not the stiffest, but offers a stable and secure fit. In addition, the inner padding is comfortable and adapts to the heel. The tongue is very thin, breathable, and with a very pleasant touch, which adapts to the instep, without it suffering movements to the sides. And also helped by the pressure reducing cords, thin and with that point of elasticity. Inside, we find a fine non-removable insole, which is also padded. 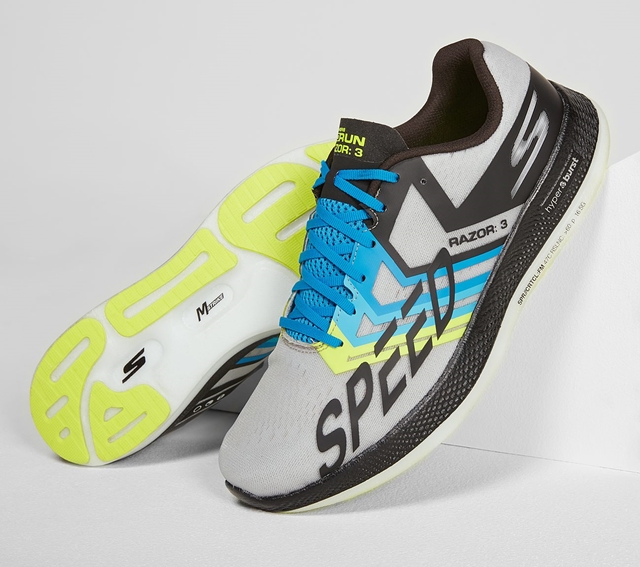 This Skechers GOrun Razor 3 is a neutral shoe, which could be included within the mixes that are valid for both training and competition. It is focused on runners of light / medium weight who are looking for super light sneakers (181 g.) to carry out intensive workouts, such as pace changes or sets. Also for competitions of any distance, although it is necessary to detail that depending on the rhythm of each one we will adapt them to one distance or another. Good cushioning, with new technology Hyper Burst Foam, which allows an almost indeformable midsole, recovering its initial state and transmitting an immediate response.

The official price of Skechers GOrun Razor 3 is € 145. 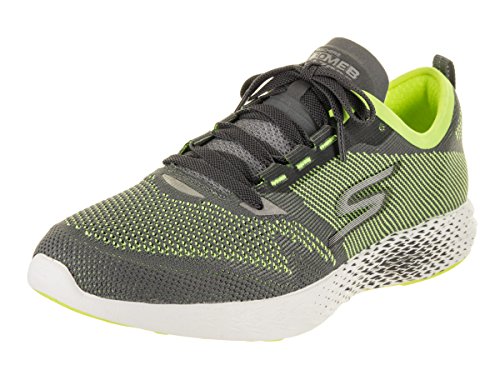