Skechers completely revamps one of its most popular sneakers: GORun Ride 8. It renews in terms of materials and technologies used, since, in appearance, they are very similar to its predecessor GOrun Ride 7. Like those, they are neutral, high-profile, light, and highly cushioned training shoes.

Included in the Skechers Performance collection, the GORun Ride 8 incorporates the innovative technology created by Skechers in the midsole: Hyper Burst, which consists of a very light and resistant material. Another of the innovative elements of the latest generation of Skechers GORun Ride 8 is the rubber used for the sole where the North American tire multinational Goodyear has been commissioned to manufacture the sole of this eighth version of GORun Ride. 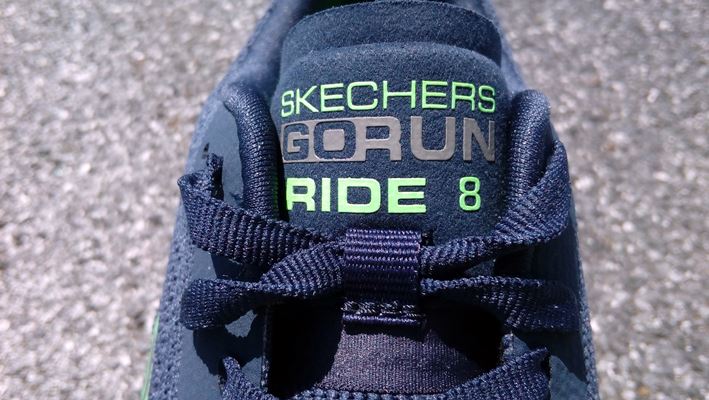 As for the upper, and as Skechers has used us lately, it is “carved” in a single knitted piece, giving it reinforcements where more protection is needed. Thus, the thin tongue is the only element that is sewn to the upper cut, plus the internal reinforcement of the heel and the neck of the shoe. 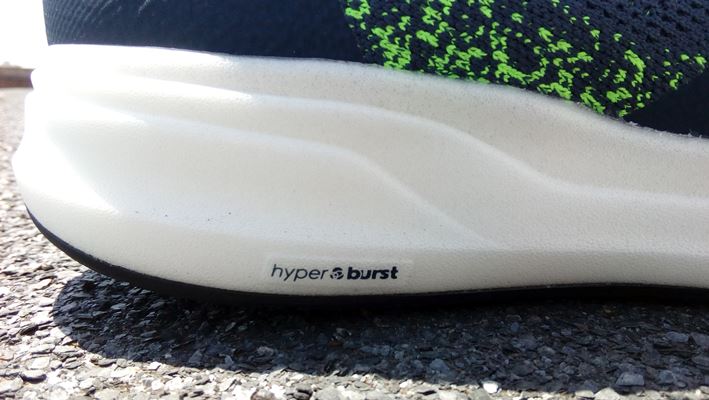 As we saw in other Skechers shoes already analyzed in the Runner's Bag, such as GOrun Razor 3 Hyper and Gorun 7, the entire midsole is made with the same material: Hyper BurstTM, an innovative compact and very light foam. The chemical process by which this foam is created is called "Super Critical" and consists of injecting COtwo in a small mold or piece of EVA foam, which when expanding increases its volume, resulting in an extremely light and resistant material. 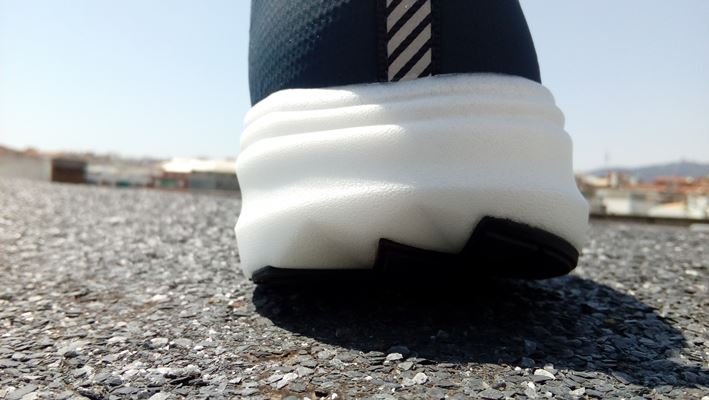 Thus, the Hyper Burst ™ compound offers greater durability and responsiveness than traditional EVA foam. The other technology present in the midsole is M-Strike (Mid-Foot-Strike) and has to do with the curved shape that it has, which favors the impact with the middle part of the foot, to obtain a stride as efficient as possible.

As in version 7, the Skechers GOrun Ride 8 midsole has a very high profile: 33mm at the heel by 27mm at the forefoot. And as in that one, keeping the drop of 6 mm. 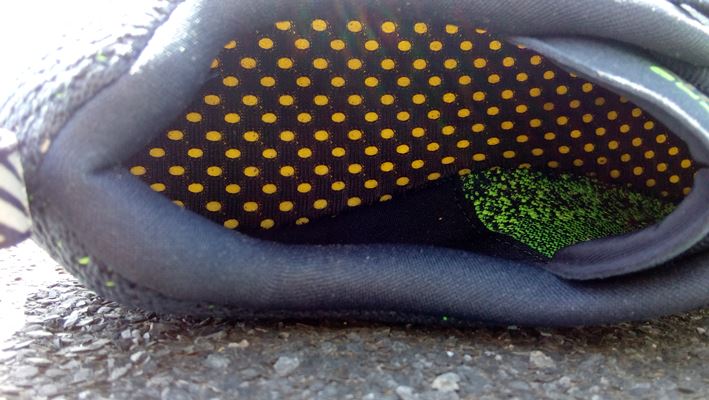 Removing the insole from the inside, the already regular extra insole added by Skechers and which is sewn to the body of the shoe is visible. This is what the American brand does to offer those who use it, choose between having a more direct contact with the ground or having a little more protection and cushioning. Although being the shoe that it is, it is more than cushioned and everything will depend on how we feel more comfortable. 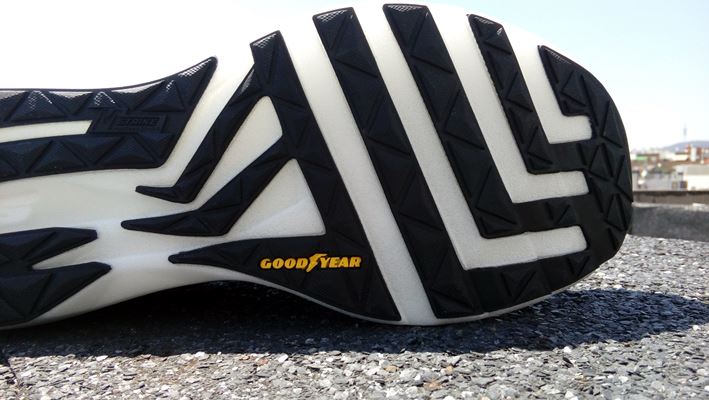 If we compare the sole of this Skechers GOrun Ride 8 with that of the previous version, we see that it has a great similarity in terms of drawings and shapes. The big difference is that it replaces the rubber of the previous version with another from the Goodyear brand. The tire manufacturer of the “winged foot” has created for the occasion a rubber resistant to abrasion and wear, which provides traction, stability and durability.

To achieve greater flexibility, the sole in the front area is designed in such a way that the rubber pieces alternate with the lines that leave the “air” midsole. Hyper Burst, also making the transition smoother and more progressive. 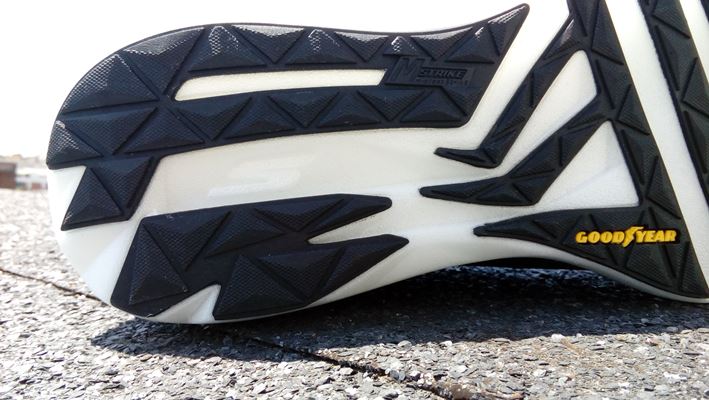 An elongated rubber plate is located on the heel and the outer middle part, which will withstand wear and tear as it will be the area of ​​first impact or contact with the ground. In the same way, the one that is placed on the inside of the heel, is somewhat smaller. The goal of not creating a sole that covers the entire base of the shoe is to reduce weight, using only the material where it is most needed. 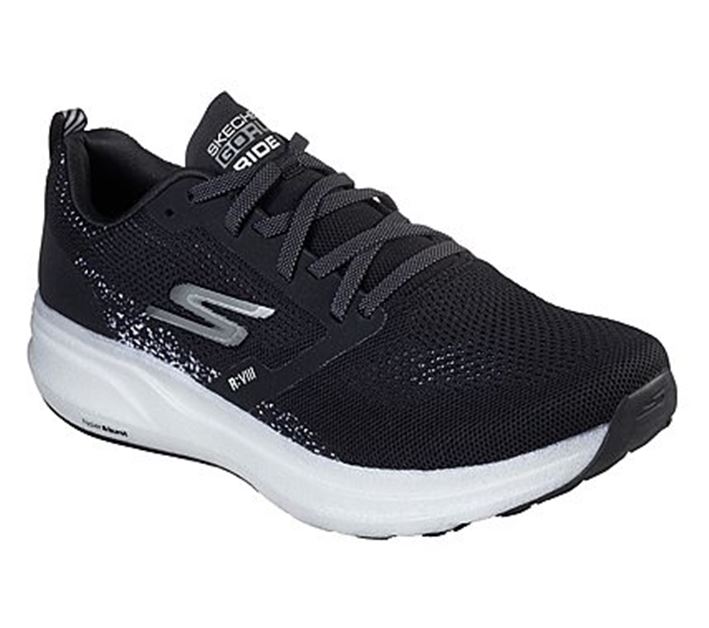 The upper, or upper cut of GORun Ride 8 also bears some similarity to that of its predecessor, GOrun Ride 7, although with some notable changes. It also uses a breathable two-tone knit fabric. This means that there are areas where this point is more closed, to give more consistency, such as in the toe and sides; and other areas where the point is more open, to offer more breathability, as in the front part (phalanx area). 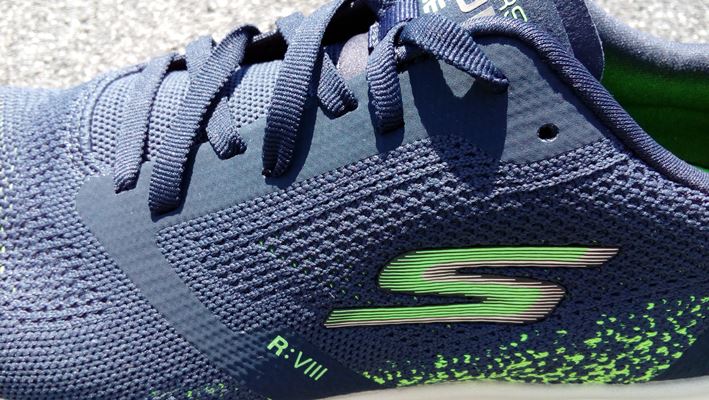 In the middle area, replace the sewn strip that went from the base of the midsole and that went up to the neck of the shoe following the eyelet line of the laces, with another strip in the same way, but thinner and heat-sealed, which will give a plus support to the middle part. It must also be said that two more round buttonholes have been added, to the six planes with the same measure of the laces that already existed, adding a little more support. 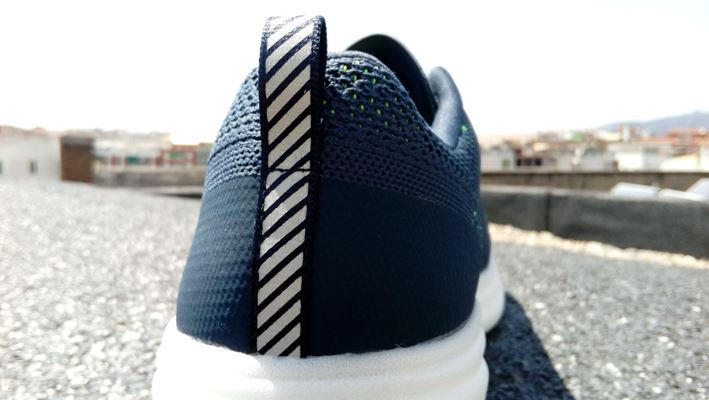 In the part of the heel, the stitched outer reinforcement has also been replaced by another somewhat wider heat-seal, keeping the reflective handle. As for the interior, the heel is well secured with the rigid buttress, lined with minimal padding, but enough to be comfortable without disturbing. The thin tongue with a pleasant touch seems to adapt well to the instep. On it, and silk-screened, are both the name of the brand and the model we are analyzing. Also on the external sides the Skechers logo is printed in 3D with reflective details, plus the Roman numeral of the version of this GOrun Ride, R: VIII. 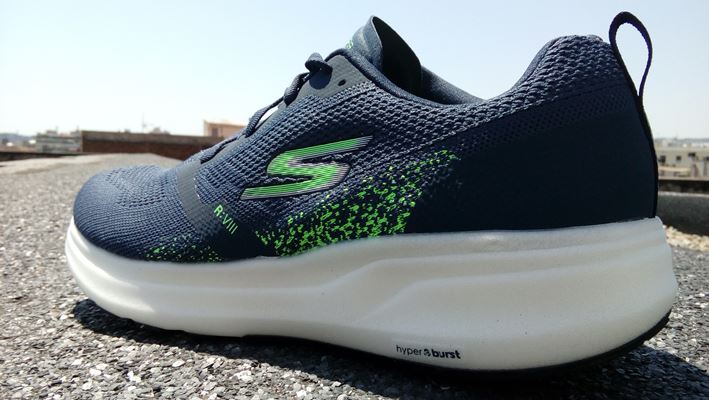 Skechers GORun Ride 8 are training shoes, even for daily use and valid for runners and runners of light or medium weight and who have a neutral footprint. They have a high midsole profile (33mm at the heel by 27mm at the forefoot) but a relatively low drop: just 6mm. The high height of the midsole helps them to be very cushioned, but the compound that Skechers uses in this Ride 8 makes them, at the same time, light: 204 grams in 7 USA in girls' shoes and 247 grams in 9 USA in the when I was a boy.

In terms of distances, it can range from a 10K to a Marathon, since its lightness and cushioning will allow you to be comfortable and protected. As already happens in other high-end shoes of the American brand, it has the new Hyper burst technologyTM, which allows a lightweight platform for the manufacture of the midsole, in addition to providing cushioning, plus a great energy return. As for surfaces where to use it: better asphalt, although perfectly usable on roads and pressed earth tracks.

Really, for those who like to go very well cushioned and, at the same time that the shoes are very, very light, this Skechers GORun Ride 8 fits them like a glove. 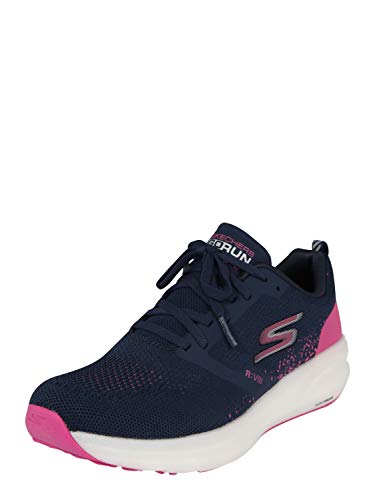