News : Sleeping at 2800 meters and living without Wifi. The secret of Filippo Ganna 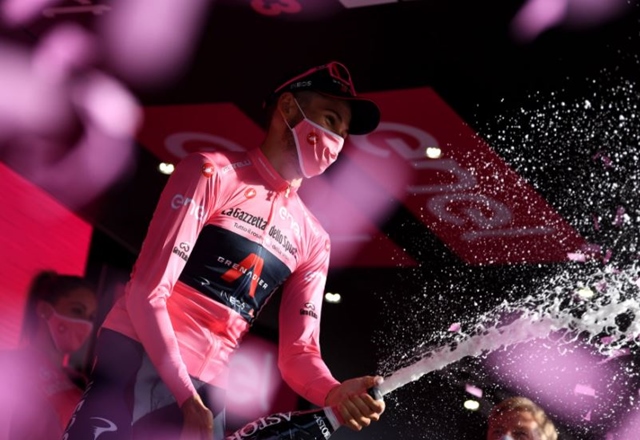 The main protagonist of this beginning of Tour of Italy 2020 is being Filippo ganna. The tall cyclist from Ineos added his second partial victory yesterday with an excellent ride in the final part.

The young cyclist of only 24 years is enjoying a last month of true dream and it is that in less than 15 days it has been proclaimed for the first time world champion time trial, has donned the leader’s pink jersey in an entire Giro d’Italia and has added two partial wins in the Italian round to his private box.

Results that reaffirm the enormous talent of an athlete who also knows what it is to be World Champion at a velodrome and be in possession of the 4 km world record in individual pursuit.

Ganna is also another clear example that successes rarely come by chance. The Italian athlete who with cancellation of the olympic games his aspirations were hit hard this season, he was forced to reinvent himself and restructure his preparation in view of new goals.

The world time trial was shining with its own light on the horizon and a first time trial stage at the Giro d’Italia returned the lost motivation.

The new and focused 2020 cycling calendar left no room for maneuver. The preparation had to be perfect and in just 2 weeks the options of aspiring to a better contract would be played (has not yet renewed with Ineos)

The objectives seemed clear so it only remained to plan and start training in the best possible way. In this sense, and as Ganna himself reveals in an interview with Gazzeta dello Sport, one of the most important decisions was to concentrating at high altitudes and completely avoiding any possible distractions.

For this he chose a unique site. The Oberto Maroli refuge in Macugnaga, very close to the Swiss border, would be its center of operations.

The italian who slept for several weeks at 2800 high, had to face really tough weather conditions at this time of year. “It rained 5 days a week and we barely had a 4 degree temperature ”.

The Ineos cyclist who, as has become common in the cycling world, wanted to take advantage of the height to generate more red blood cells and increase his blood hematocrit levels, had to deal with another small setback.

The shelter I didn’t have Wifi so I only logged in for the basics, but at no time did I check anything on social media. “I did not want to read any comment in which I will be considered a favorite.”

Filippo Ganna did not want distractions on his way. The talented cyclist knew that there was a world championship to win and a Giro d’Italia in which he could use the pink magic of the leader.

With so much focus and dedication, it’s no wonder the successes have come sooner rather than later. Watch out for Ganna because at least he will still have two clear chances to expand his locker. The time trials of stages 14 and 21 shine brightly on the horizon.