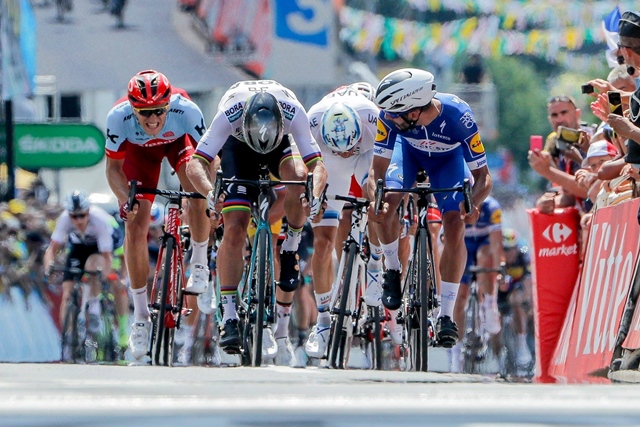 If some time ago we reviewed the best cyclists ever, today we have to do the same with the best sprinters ever. The fastest cyclists of all time and who deserve to be on this select list due to their track record, number of wins or bravery.

Authentic torpedoes in the massive arrivals and true “killers” in the final meters. Do you share my opinion?

The 10 best sprinters ever. Ranking Top 10 with the fastest cyclists of all time. Are you missing a name?

The only Spanish cyclist on the list is that Óscar Freire was a unique rider. The Cantabrian had an innate facility to solve the massive arrivals. A real killer nose that allowed him to add up to 3 world titles.

A runner who never had a team of pitchers and who had to make a living for almost his entire sports career. 4 wins in the Tour de France, 7 in the Vuelta a España and 3 Milan San - Remo shine with their own light in a long history. A true super class and one of the fastest riders to take shape.

Along with Mark Cavendish, André Greipel is the only active cyclist on the list. At 37, the gorilla is far from its best version and it seems difficult to think that it can recover the level it acquired at the beginning of the last decade. A runner who stood out for something was due to his enormous regularity. Life insurance for your team and to ensure 10 partial wins in each season. In his record we find 11 victories in the Tour, 7 in the Giro and 4 in the Vuelta. In addition Greipel also accumulates 3 wins in the national championship.

Surely the smallest and lightest cyclist on the list. McEwen is probably the best placed sprinter in history. The aussie was pure spectacle and always ended up appearing in the final meters fight. A full-fledged stage hunt that feared nothing and no one. A danger in the most complicated arrivals and with one of the best career visions in the final part. McEwen retired with 12 wins in the Tour de France and Giro d'Italia, plus countless wins on laps and minor races.

He couldn't ignore the great Erik Zabel. One of the longest running sprinters of all time and with a more evident regularity throughout his sports career. The German added 12 partial wins in the Tour de France (in addition to 6 green jerseys), 8 stages in the Vuelta, 4 Milan San - Remo, 3 Paris Tours and 1 Amstel Gold Race. Zabel was never the fastest but he was one of the sprinters who best positioned himself and best climbed the explosive slopes. A few devastating meters that allowed him to go down in cycling history.

I allow myself the luxury of placing Djamolidine Abdoujaparov in sixth place because the Caliph of Tashkent was a true pundonor. A locomotive in the final meters that feared absolutely nothing. One of the most problematic and aggressive cyclists in memory and who over the years won over several enemies within the platoon. The Uzbek accumulated 9 stages in the Tour de France, 7 in the Vuelta a España and 1 in the Giro d'Italia. Without being one of the fastest, Abdoujaparov is undoubtedly one of the most spectacular.

If Marcel Kittel is not higher on the list it is because his sports career was not long enough. The German was a fucking power and in his "prime time" a cyclist who had nothing to envy to Mark Cavendish and Mario Cipollini themselves. Kittel was for 3 or 4 seasons the king of speed. An insurmountable bullet in the last 200 meters that led him to win 14 stages of the Tour, 4 of the Giro and 1 of the Tour of Spain. Kittel lost motivation and announced his early retirement from professional cycling at just 30 years old.

Ale Jet, as Alessandro Petacchi was known, is, together with Mario Cipollini, the best Italian sprinter in history. Petacchi accumulated 19 active seasons and although in recent years he was far from his best level he was always a benchmark for his teams. Life insurance on flat arrivals that achieved no more and no less than 22 stages in the Giro d'Italia, another 20 in the Vuelta a España and 6 in the Tour de France. In the Italian round of 2004 he managed to accumulate 9 partial wins! Petacchi lived in his early years in the shadow of Cipollini but quickly demonstrated that he had a place among the world cycling elite.

The "oldest" on the list but also the most successful of all. The Emperor of Herentals was a professional between 1953 and 1970. 17 years that earned him more than 400 wins in his showcases. A historical savage that will hardly be overcome. Van Looy is also the most complete sprinter on the list, as he has added 37 world championship wins to 2 world championships, 1 Milan San Remo, 2 Flanders Tours, 3 Paris Roubaix, 1 Liege Bastogne Liege or 1 Giro de Lombardia.

The best sprinter in the history of the Tour de France. Cavendish has accumulated 30 partial wins in the French round and although it is difficult for him to be able to expand that number even while he is active, it is not so far from Eddy Merckx's record of 34.

Cavendish was undoubtedly the best sprinter of the moment for years and his showcases also include 15 stages in the Giro d'Italia, 3 in the Vuelta a España, 1 Milan San Remo or 1 World Cup. A benchmark for British cycling who still has in his hands the possibility of increasing the record.

No one but Mario Cipollini could top the list of best sprinters in history. The Beautiful, The Lion King or Super Mario is still the best of all time today. A killer and a show man on and off the road. Nothing more and nothing less than 42 stage victories in the Giro d'Italia, 12 in the Tour de France and 3 in the Vuelta a España.

Cipollini is the cyclist who changed the history of mass arrivals. His famous "treno" gave a tactical turn to cycling and the truth is that the invention did not go too badly for him.