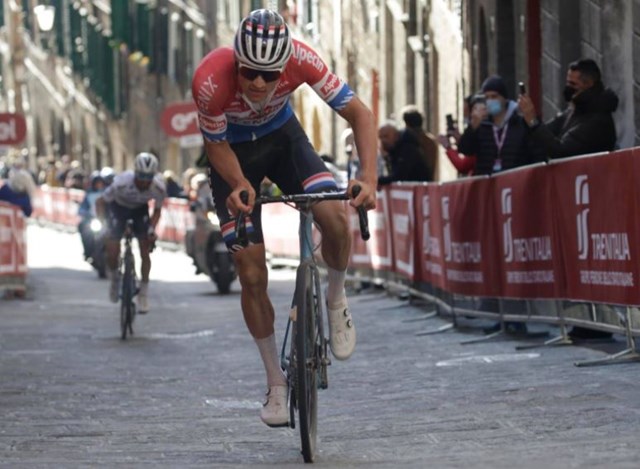 La Strade Bianche left us last weekend one of the largest exhibitions in recent cycling history.

Mathieu Van der Poel He showed off his enormous physical power and with a tremendous class he left sitting nothing more and nothing less than the current world champion.

Julian Alaphilippe no he was the only one who had to abdicate before the superiority of the Dutch cyclist. The last two winners of the Tour de France, Egan Bernal and Tadej Pogacar they also succumbed to the attacks of the Dutch beast.

The two demarrages that he released in the final part of the race, especially the last one in the urban wall of Siena, it was evident that they had to be linked to some stratospheric power data. Something very similar to what it took to win the Tour of Flanders last year.

For hours there was speculation on Twitter and among the groups of Whats App of the grupetas, about what power would have been able to move Mathieu Van der Poel in that last kilometer of legend.

Watts are generating more and more expectation among the amateur public and it is that, contextualized, they can be an excellent tool, not only to train and improve, but also to assess and compare the huge leap in level that appears between an advanced level hobbyist and a professional cyclist.

In the attached image you can see some of the most interesting and spectacular data of the race, although for the most “geeks” Mathieu Van der Poel has also posted the entire activity on his personal Strava profile.

Looking at the watts, the pulsations, the speed, and the unevenness there is no doubt that the Dutchman used himself to the maximum during the almost 5 hours of racing.

Van der Poel is from another planet and without detracting from any of his squad mates, it seems difficult to think that beyond Van Aert or Alaphilippe someone else can be at his height in races like the Tour of Flanders or the Paris Roubaix.

The current generation is surely the most powerful in history. Pure talent and enormous competitiveness that forces them to continue improving day after day so as not to be left in the background.

Fans who are used to undergoing power training will have noticed that The values ​​that Van der Poel moved on average during almost 5 hours of effort are higher than those that most fans can develop in a 20-minute FTP test.

The images of Van der Poel going up Santa Caterina will be etched in the retina of cycling fans, but his data will undoubtedly remain forever as one of the most powerful physical displays in sports history.

A good one is coming for Flanders and Roubaix. At La Bolsa del Corredor we already have the popcorn ready. Are you getting in the car?