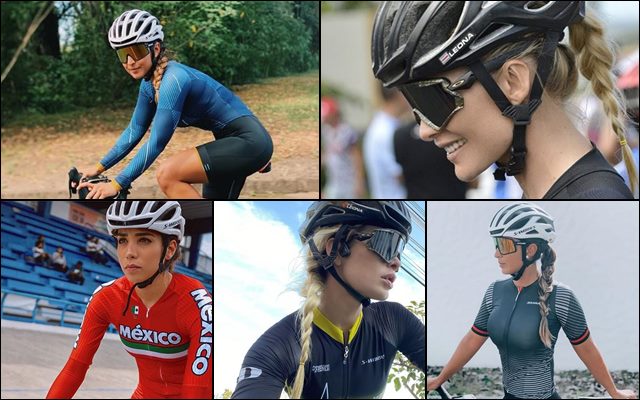 They have become the great standard-bearers of the women's cycling, in a true emblem for the most powerful brands in the sector and its sponsored publications are priced at a gold price. They are the queens of cycling and social media.

A select group of women who are stomping and with an international progression that seems unstoppable. Next, we go with a compilation of 10 Instagram accounts who strongly lead the rise of women's cycling.

A fun mix that unites professional cyclists, supermodels or sports commentators. All of them under a common denominator. Love and passion for cycling.

This young Mexican cyclist, in addition to being a professional with the Agolico BMC Pro Cycling Team, is one of the most followed sports influencers in South America and a model of great caliber. Gaxiola temporarily set aside cycling for a year, however, last year he decided to return with the clear objective of competing for his country in some Olympic games. Gaxiola has triumphs in national and Pan American championships. Axiola combines road cycling with track cycling.

Lucia Javorcekova is the most influential on the list, or at least so is reflected by her more than 1.5 million followers. The Slovakian who once became a professional cyclist and who left the sport of two wheels to be a DJ, currently works as a reference model. The Slovakian who continues to rise on social networks like foam has the support of major brands and in her spare time continues to enjoy cycling, albeit in a totally different way. His Instagram account is the least .... spectacular.

Caro Ferrer, also known as the small great Colombian, was born in Medellín and is the great ambassador of amateur cycling. A woman who in addition to being a cyclist and participating in all kinds of events is a graduate in physical therapy.

Carolina obviously does not currently practice the profession but takes advantage of the pull of social networks to share her knowledge and promote cycling as a healthy lifestyle. # Tuesday of health and # training Thursday are a trend in Colombia. Ferrer also offers cycling tour services with packs that include visits to the best races in the world.

If someone thought that beauty and sports success were not compatible, they are very wrong. Pauline is by far the most successful cyclist on the list and 5 world titles appear in her showcases. The 28-year-old Frenchwoman who is still active with the Canyon Sram team is a true emblem for our sport since she has been the world champion in cyclocross, road cycling and MTB (Cross Country). Currently he has a romantic relationship with another world emblem of MTB, the also French Julien Absalon.

Belgian Puck Moonen is considered one of the most beautiful cyclists in the international squad. The 24-year-old cyclist is currently competing under the Chevalmeire, leaving three campaigns behind in the women's Lotto Soudal. Moonen once had a romantic relationship with Eli Iserbyt, one of the greatest cyclocross specialists of today.

Canadian Emily Batty is one of the cyclists with the longest sporting career. The Canadian continues to compete at a good level at her 31 springs and is considered a reference in the women's MTB. He currently competes with the Trek team. Batty has the victory in the 2015 Pan American Games and two World Cup medals in the absolute category.

The name of Marion Rousse will ring more than one for her presence in the French media. Rousse currently works as a commentator for television but previously was a professional cyclist, even proclaiming herself the champion of France in road cycling. Rousse was also a partner with professional cyclist Tony Gallopin and is currently rumored to be in a relationship of more than friendship with Julian Alaphillipe.

Letizia Paternoster is the most promising cyclist on the list. The 20-year-old Italian girl is several times world and European track cycling champion. Paternoster who seems more focused on the road lately has a promising future and the Trek team did not miss the opportunity to get hold of one of the world's greatest talents.

Women's cycling in South America continues to grow and if it does it is partly thanks to the influence of cyclists like “therealbeautycr”. The Costa Rican is an emblem in her country and her profile biography is a declaration of intent. "My name is Leonora, Leona tells me, I am a businesswoman and a model ... and I also love cycling

We close the list of influencing cyclists with the profile of “mielena7”, a Costa Rican cyclist ambassador for multiple brands that participates annually in a number of sporting events related to the world of two wheels.