Today, March 28, marks the 40th anniversary of the World Cross Championship that was held in Madrid at the La Zarzuela racecourse and in which ‘El taca’ was fifth. The polls called for a statue of him in the Wax Museum.

One day they called him from the Wax Museum.

– They told me that they had done a survey to see which athlete they should put in the Museum and that I had come out.

Antonio Prieto, actually, was very popular in the Spain of the eighties.

“Yes, at that time it was,” he recalls today. Perhaps because my typology was that of a person who started out at a disadvantage.

– People always favor the weak and I was an athlete who did not reach 1.60 in height with the handicap that that meant.

That day the Cross World Cup was held in Madrid, at the La Zarzuela racetrack, and no one fought like him.

– In fact, before the Ethiopians attacked, I had planned to do it myself.

It was a sunny Sunday afternoon: an afternoon for history.

‘El taca’ finished fifth: everyone applauded him except him.

– A year before I had been eighth in Paris and I thought that in Madrid my time was coming to get on the podium.

But whenever he passes by the ‘El taca’ racetrack he remembers that day.

And he also remembers Yifter, Kedir, Mamede or Graig Virgin who, thanks to the Ethiopians’ mistake, was going to win. 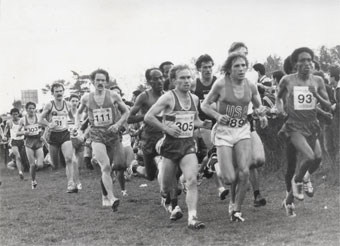 – I remember that since November every weekend the shortlisted gathered to run at 8 in the morning at the racetrack before the horse races started, and I remember that the grass was very high and that it was terribly cold and seeing Fernando Cerrada (who always came without gloves) put his hands in the sleeves of his sweatshirt.

And dreamed. ‘El taca’ dreamed because on very cold days one dreams too.

– I always dreamed of getting on the podium in a World Cup since I saw Mariano Haro.

‘El taca’ was a 23-year-old athlete who lived in the Blume residence.

– On 23-F I had just arrived from a cross that I had run in Tunisia.

Everyone knew that ‘El taca’ was very good.

People were surprised that José Luis González and Sánchez Vargas beat him in the Spanish Cross Championship.

But it takes time until it is discovered.

– As a young man you think that the more you train the further you will go. But what you do is exceed your tolerance level.

‘El taca ‘never got on the podium in a great championship.

– It’s true that I could make mistakes. He had to have weeks of recovery. But I gave what I could give. I was fifth in a world-wide cross in 1983 4 seconds behind the gold medal. The first three entered in the same second. But sometimes life is luck.

Forty years later, ‘El taca’ promises that it has not changed that much.

But it endures torture.

– The knees do not allow me to run. As soon as I try to do it, they irritate me. I have a consultation with the orthopedist on the 7th.

It was not easy being an athlete in the eighties.

– All quality training was with nails. We ended up with shattered twins.

“And the shoes weren’t bad,” he adds. In the 80s they improved a lot. All the brands were good. But I suffered almost every injury up to a stress fracture. I remember Jorge González Amo told me one day: “The first time I heard about stress fractures was when you said it.”

But ‘El taca’ would never change the time he lived.

– At that time we had an advantage. There were only two channels and almost everything was broadcast. You could see a lot of athletics and hence that popularity, because people saw you almost by force and if I talk about money….

“But it doesn’t end there,” he adds. They even offered me a million (€ 6,000) and I didn’t take it because I was preparing for the Los Angeles 84 Olympics and it was a very risky race.

– Look at what they paid us and the apartment that I bought in Segovia came out for four million pesetas (€ 24,000)

But that’s how the nostalgic eighties were.

And now, that he cannot run and that he accompanies his daughter Idaira (who has become an athlete) on a bicycle, the nostalgia is reinforced.

“Idaira is not a great talent but she is a hard worker, very responsible,” explains the father, who is his daughter’s coach.

One day he realized that history repeats itself.

– It was on a cross in an Autonomous Championship in Castilla León. Suddenly, I see her with a shoe in her hand and she gives it to me after the first lap and keeps running and I think ‘this one is going to retire’. But it turns out the race ended.

And then ‘El taca’ remembered him at the 1984 Cross Country World Championship in New York.

– I lost a shoe right from the start, from the first stride, but I also finished the race.

Because athletics is like this: you never know what will happen.

– My daughter? Well, he has participated in two Spanish championships and he likes it madly and he combines it with his work as a physiotherapist here in Segovia, and I think it will come because he is 23 years old. But step by step.

And who knows if some March 28 Idaira will run a World Cross World Cup like he, his father, Antonio Prieto, ran ‘El taca’ at the La Zarzuela racetrack 40 years ago today.