Teresa Errandonea, 25, has had to leave her comfort zone next to home to find the best of herself in athletics. “It was not anyone's fault, but mine, after so long, I needed something else. And in life you have to make decisions ”.

It all started that day in which she proposed to Ramón Cid to meet for coffee and Ramón Cid, that guy hardened in a thousand battles who seems to know everything, told her:

-I think I can help you.

It was she, Teresa Errandonea, who caused that appointment, the one who asked Carlos, the son of Ramón Cid, whom she has dated since he was 16 years old and who is also an athlete who has managed to do 2.09 in jump height:

-How does Ramón train?

Until then Ramón was only the father of her boyfriend with whom she had coincided in a celebration: birthdays and things like that. But now Ramón Cid is the man who trains Teresa Errandonea in San Sebastián. The same man who on these closing days sends him the training every morning by Whattsap or directly picks up the phone and asks him:

- How about of spirits?

And she, Teresa Errandonea, answers, smiling, that she is well and that of course we will dream again and fulfill dreams like this last winter in Gallur or Orense and to hug because it was a winter between hugs, magical before this storm fell that got us all home.

So Teresa bought a roller that she placed in the storage room of the Irún flat, 25 minutes from San Sebastián, where he dreams of falling one day from 8 seconds in the 60-meter hurdles and of exceeding 12.84, which was the Olympic minimum in 100, a real alternative, today, real as life itself.

We are delighted to believe in it, to imagine it one day in an Olympic final and to remember that we all have the right to dream.

Meanwhile, she defends herself from adversity by doing power circuits at home, training on the stairs of her neighborhood community or on that 50-meter straight that she has in the garage from which she never imagined that she could take so much advantage.

The neighbors, who see it, understand it:

-They know me as the running girl.

Teresa Errandonea, in fact, has been running since she was eight years old when she started in Irún. She was there all her life until, involved in that internal struggle with herself, she decided that she had to change and told Ibon Muñoz, the coach with whom she had been with all her life, that she was leaving. That he had to go. And it was not easy.

"Of course it wasn't easy," she admits, "because when I told him I felt that I was failing him and in this life I know of nothing worse than failing people." But I couldn't continue like this: it wasn't right. I felt blocked. I had some injuries that did not benefit me either. I had even thought about leaving athletics until the day I told him: ‘Look, Ibon, this is not a problem of yours, it is a problem of mine that I need to get out of here, I need to get out of this Irun track.’

-I left because I had to. They were many years in the same place: I had always been there. I have not had any experience abroad or anywhere else. The body asked me for a change. I had that internal struggle that I had to solve and, once I told my coach, I said to myself, 'Teresa, now you have to tell Ramón Cid and he has to accept it', but I went, I told him and he accepted and a new stage began for me.

Today, Teresa Errandonea speaks aloud of happiness, of conformity with herself. 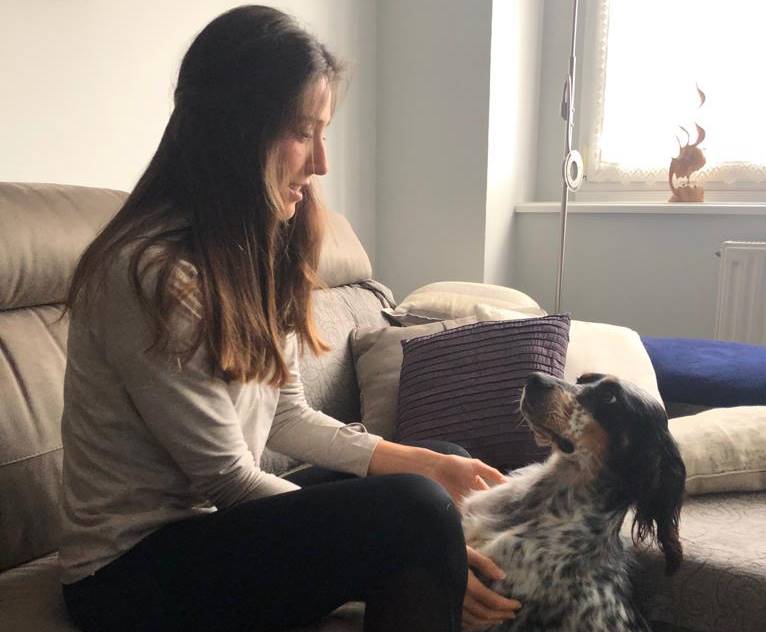 -No, no, no Ramón is not a sergeant, among other things because we do not give reasons. But it is also that we are so fond of him that we try to do everything he tells us. In the end, he has gone through all the roads that I intend to go through.

On Ramón Cid's last birthday, the training group gave him “a new Ipad”: Teresa Errandonea collaborated as the most.

In reality, the happiness with which he collaborated in that gift meant everything he was looking for when he made that decision to come to train in San Sebastián, when he moved away from what could have been his comfort zone for life in Irún where he I had everything at hand next to the house. "However, to go to San Sebastián I have to take the car and it doesn't take long because it is a highway, but it is true that entry to the city is slow."

Since then, almost two years have passed and this winter the results have been collected with a brilliance that makes us write or ask her what has changed with Ramón Cid.

-I especially, would say that to work the resistance in the 100 fences we do series with 12 fences separated 8 meters each. But, I don't know, changing changes too many things because each coach has his method and there are so many things: the series, the drags, the strength, the technique… The first year, for me, has been one of adaptation. But I know that athletics is like that, that athletics take time.

-That's what everyone says.

-I want to see how far I can go and it has to be from now on. Look, if it weren't for athletics I would no longer live at my parents' house and, instead of working part-time in the company I work for, I think I could do it full-time and then I could become independent. But I want to know what I can do in athletics. I don't want to regret anything. I don't want to say in the future, 'I wish I had tried,' and can no longer do it.

Daughter of a medical visitor and of an employee of the Tax Agency, Teresa Errandonea has ever thought of going to the CAR in Madrid or Barcelona. “Yes, especially when I started at the University. I had that idea. I had that temptation. But then I gave up because I love living here, next to the coast, being able to catch an afternoon and go to a cove; I love the landscape and I love living surrounded by my family, my people, having a problem and having them here next to me. So I don't see myself living anywhere else. ”

Meanwhile, his life is divided into two. One, in the morning from 8.30 to 13.00, where he works in the financial department of a company. The afterlife is in the afternoon when he dresses up as an athlete. She dreams like an athlete and crushes herself like an athlete who, at the age of 25, prepares to make the best of herself. Maybe that's why this was a messy and optimistic conversation full of opportunities: she was never such a good athlete as now.

We did not expect it either with the forcefulness of this winter that one day she summed up this way on social networks.

-Dreams are sometimes fulfilled and mine have started to come true - he wrote after achieving the third best Spanish brand of all time in the 60 meter hurdles.

-Thank you, Ramón Cid, this is all yours.