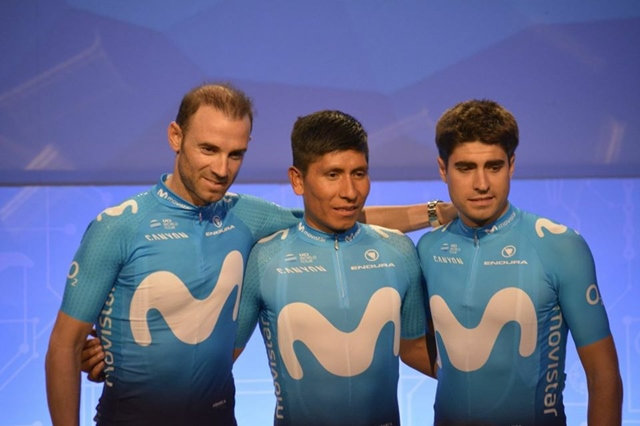 Last Friday the Movistar cycling team announced the official publication of its documentary: “The less thought day" A series of 6 very interesting and emotional chapters, which from the most intimate and personal point of view narrates what happened during the 2019 season.

The documentary, available on Netflix and Movistar +, far from presenting a superficial theme, enters fully into the controversy that surrounded the telephone squad during the past year.

The directors of the series, José Larraza and Marc Pons, are in charge through their sublime work of bringing viewers the experiences of a professional team, but also materializing what was an open secret. The three-way discrepancies between Nairo Quintana, Mikel Landa and the sports management.

It is true that the documentary goes much further, that we can see the most humane side of Richard Carapaz, the doubts and fear of a world champion like Alejandro Valverde, or the excellent structural task of José Luis Arrieta, Pablo Lastras (sublime), Chente Garcia Acosta or Eusebio Unzubé. But we would lie, I the first, if we did not admit that we were killed by curiosity to know the trigger for the controversy.

Personally, I gave you my opinion a little while ago with the publication “Nairo Quintana and the real problem of the Movistar Team”. A fight of egos and a true organizational nonsense which had been the laughter and widespread criticism of the international platoon for years.

Egocentrism and lack of companionship, the chronicle of an announced death.

Fortunately Unzué realized in time that a team of the size and budget of Movistar Team could not afford a gruesome spectacle like that of the last Tour. It was then when in the Tour de France the march of Nairo Quintana and Mikel Landa began to materialize.

I do not want to spoiler and you will be the ones who are going to draw your own conclusions during the documentary, but what I am convinced of is that Movistar and Unzué are, finally, on the right track.

More than one will think or have already criticized the decision to do without Mikel Landa and Nairo Quintana. Two of the best climbers in the world and to this day I still think that for class and talent they have a Tour de France on their legs.

Sports is very good, but both have repeatedly demonstrated lack of companionship and self-centeredness. It was time to renew and give fresh air to a team that had spent years living in a loop of constant controversy.

Perhaps this will take time and it is evident that neither Enric Mas nor Marc Soler are still in a position to overshadow Egan Bernal or Tadej Pogacar. However, if things continue to be done well, a clear line of action is defined and at last you start to run as a team making the slogan "we roll together" good, the results may end up coming faster than expected.

Carapaz's departure does not worry me, what does worry me is that between egos, controversies and discrepancies the opportunity to clothe a great leader is wasted. Yes, Purito Rodriguez, Denis Menchov, Luis León Sánchez or Rigoberto Urán, among others, decided to offer their best years away from the Spanish structure, perhaps for some reason that goes beyond the economic one.

The best standing out of all this? Well without a doubt Alejandro Valverde. A man in and out of the platoon who at all times is oblivious to the team's controversies and concentrated as a neo professional at his 39 springs. Coincidence or not, Alejandro Valverde, the infinite cyclist, is not criticized this time by anyone. The Murcian, beyond his way of running, is a true example of professionalism and sacrifice for all young cyclists.