She, who is already a doctor, returned to the elite last year after more than 3 years injured and he, at his age, ran 100 races in 2019 after overcoming colon cancer.

Isabel, her mother who was one of the pioneering women in that first 10,000 that was made in 1988 on the Serrahima track for women only, told her:

-If you don't compete again, nothing happens, Victoria. You don't have to prove anything to anyone.

But Victoria, who had been away for more than three years, was not resigned:

-It's something I have in there, mom; I want to step on the tartan again, I want to recover those feelings.

"If you want to recover, come run with me to the beach in Mataró," said his grandfather Isidre, who, at 84, is a living example. Last year, after overcoming colon cancer, he ran 100 popular races in the 52 weekends of the year.

In the Jean Bouin, the man even became a hare of the group that wanted to go down from 1 hour 10 minutes.

Victoria is proud today. What's more, when I tell him that his grandfather is his best kept secret, he answers with an exclamation:

Victoria is a 27-year-old elite middle-distance runner with a medical career completed.

Today he could be working and he could even have done the MIR but last summer, after three years injured, he decided to give himself a new opportunity in athletics.

He had run again without pain.

Training five days a week he was third in the Spanish championship in La Nucia, where the 800 ran in 2'06 ”.

His family agreed with him, among them Isidre, the grandfather, who decided that he had to take that photograph with the granddaughter who today is like an amulet: he, with his medal recently won at the European Master in Venice, where he went by bus from Barcelona, ​​and she with the medal achieved in the Spanish Championship of 800.

-If my grandfather can do it at his age, why am I not going to keep trying at 27 years old?

In fact, on March 12, two days before the Alarm Status was approved, Victoria Sauleda first concentrated on the CAR in Sierra Nevada.

-I had never concentrated on altitude.

It was for 21 days and he's been nine weeks with this confinement. 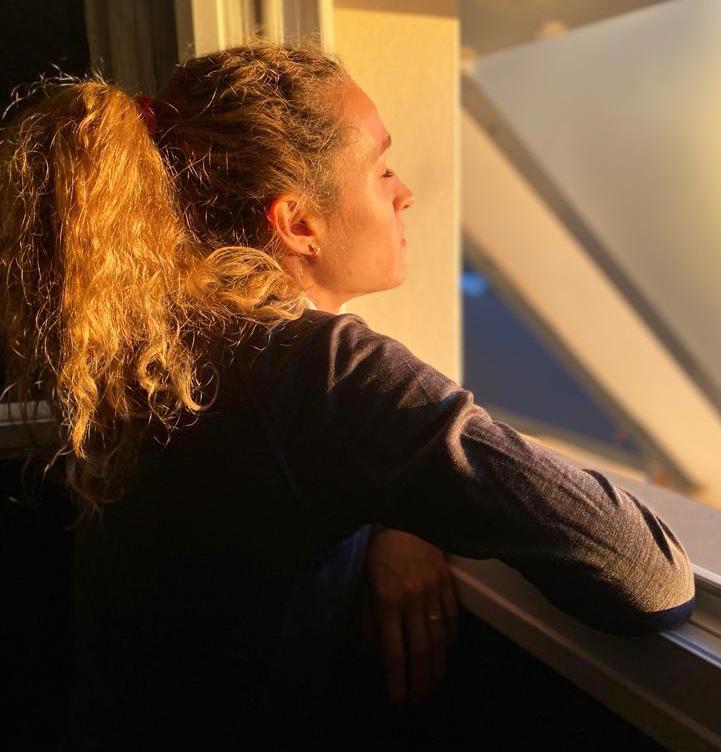 -Who was going to tell me?

At first I couldn't go running, "but we had a treadmill and a small gym" and board games. Above all, board games to hang out.

Everything in an apartment because the CAR closed it and the athletes, who concentrated with it, had to move to some apartments at 2,300 meters above sea level, which is well priced.

In the photograph, which accompanies this report, Victoria is looking out the window of her apartment.

He sees mountains that cannot be seen because today it only rains.

She, who lives in Barcelona, ​​at sea level, I have never seen so much rain in a row as in these 9 weeks.

Not so much snow.

-There have been days when we could hardly go to the supermarket in the plaza to do the shopping.

"It will be something historic in my life," she approves herself, which is not that she is having a bad time despite how much she misses her family.

For example, his mother, the one who accompanied those three years to so many physios or to those MRIs that imposed so much respect. But her mother was the same one who calmed her down in the worst moments: those of pulbalgia, those of stress fracture, even those of nomonucleosis.

And his grandfather Isidre. Always Isidre with whom he talks on the phone and the man, all excited, tells the granddaughter that she can now go outside to run.

What things: how important it is to run for an 84-year-old man.

Victoria Sauleda, precisely, the confinement has caught him in Sierra Nevada because he wants to run, give himself the opportunity to go to the Tokyo Olympics, to leave everything in the attempt.

But that is the best thing in life. Do not be suspicious of the opportunities you are looking for. Do not stop believing in them.

If not for this, Victoria Sauleda would have done the MIR this year.

And, like many of her colleagues from the Autonomous University of Barcelona, ​​who studied with her, perhaps she would be fighting against COVID-19. And it would be part of all that community of pain and the humanity of hospitals.

And that's what hurts her the most.

-Not being able to be in both places at the same time: having studied and not being able to help. But one day when I started putting on the nails and running without pain I decided that I should give myself this opportunity.

There is no need to justify it.

-Who was going to tell us then that we were going to experience a pandemic like that of the Spanish flu of 1918?

And that's why she is in Sierra Nevada, where it keeps raining.

The drops of rain are like the pages of a book that has yet to finish and that took off last summer when Victoria Sauleda thought again of the Spanish championship.

He had been gone for three years.

He proved that it was not an impossible mission, as Dr. Capape always told him:

-You will come back.

Victoria felt so good that she began looking for evidence that would allow her to achieve that added value that can only be acquired by competing.

And he found them outside of Spain.

-And first I went to the Diamond Popular that takes place in Monaco the same day that the Diamond League is run and that was in which Fernando Carro broke the Spanish record in 3,000 obstacles.

Since then, there is a lot and there is little to tell. COVID-19 has also stopped her cold.

Including his grandfather who is on his way to 85 years and who is looking forward to putting on a bib again.

So I think this should be read by so many people of his age.

Age limits but does not always prevent.

Victoria Sauleda gives the example of her grandfather "who began to run at age 40 to lose weight and who, at the age of 51, managed to do 2 hours 46 minutes in the marathon."

Next summer Victoria would like to set her own example: to say that after three years injured she can also reach some Olympic Games.

His grandfather has already told him that it is possible, that almost everything is possible in life, word of Isidre Ferrer Cantal That is what man is called:

The illusion is heard when saying his name.

And until proven otherwise ILLUSION IS NOT AGED.