The Playas de Castellón is the best athletics club in Spain and Europe that in 15 years has gone from € 16,000 budget to more than one million. A club in which a retiree decides, that has two administrative staff in office and the problem of finding the financing they need. But even so, Playas never stops being there.

20 years ago I would bet that Borja had told me the Larios. But this time he told me the Playas de Castellón, which he wants to run at the Playas.

Borja is a 17-year-old from Madrid from the Ciudad Lineal neighborhood, passionate about athletics, who has already broken down the 4'00 "barrier at 1,500: 3'57" at Los Corrales de Buelna.

At his age, others dream of the goals scored by others: he dreams of the races he runs. And those others do not tell you about the Playas de Castellón, but about Real Madrid, Liverpool or Manchester.

However, Borja tells me about the Playas de Castellón, in the Parque de Arcentales, in Madrid, where he started to run as a very, very young child from his father's hand. I did not know then that he would like it so much, to feel so happy, to know that word called hope.

Today, I do not know the reason why I start to write this text of Playas de Castellón with him, which has no connection with the club. But then I stop to think about the reason and I understand that, in fact, writing are impulses, that the best way to extract juice from the texts are the impulses.

The impulses that come from a corner of Madrid this time, in which I see myself talking about the Playas de Castellón, in the same corner where so many people pass by running every day and, nevertheless, most of them do not even know that the Playas de Castellón has won the European Cup of clubs and its girls have just broken 27 years of Valencia's hegemony this weekend.

It has to be something special: the Playas de Castellón.

A club that was born on March 20, 1981, before the father of Borja approved the oppositions for the administration. A club that won its first title in 1998 in Guadalajara, before Borja was born. We imagined then that there was no way to be able with the Larios, with the mythical Larios. But the future knows about us things that we do not know. And then the Playas de Castellón appeared.

Nor did we know then that 21 years later, Playas would still be here, or that what it has achieved in these two decades resembles a masterpiece. His technical director is still Pepe Ortuño, a 65-year-old guy who at 17 trained his first athletes, among whom there was one who became a spectacular footballer in great teams of the world: Gaizka Medieta. "At 13, he came to make 2'34" in a 1,000 and to be champion of Spain of 1,000 obstacles with 2'52 "".

Today, Pepe Ortuño is already retired as a teacher. If I wanted, I would have all the time in the world. I could spend my days walking by the Mediterranean, listening to music, living my life, traveling without emergencies. But he is still in the club where he charges nothing but the telephone and travel. And he works until the early hours of the morning. Finding him on the phone is still a feat: he always has a thousand and one calls.

The joints of the Playas de Castellón are in the head of this man: Pepe Ortuño. It could be something like Clint Eastwood. A guy who travels at dawn in his car to a championship in Antequera, that sends at untimely hours the press releases to the media and that became eternal the day he discovered Andrés Vera in the old ash track of Castalia. Then, Andrés became a finalist in the 1,500 of the Los Angeles Olympics 84. There are very difficult memories to beat.

Today, Andrés Vera is a 58-year-old entrepreneur who, after doing a professional career in the United States, has returned to live in Spain. And, as if it were the second part of a romantic novel, has returned to lend his support to the club in search of that sponsor that allows to take another step, perhaps the definitive, the only one missing.

He has very good athletes the Beaches like Víctor Ruiz, Thierry Ndijumwenayo, Cristina Mirror, Javier Cienfuegos, Patricia Sarrapio or Pablo Torrijos, athlete of the earth whose image in the month of May in the buses of the city excited for the celebration of the European Cup of clubs. It meant that in the effort is future. It meant that Playas could win that Cup at home next to their people. And he won it. And, the next day, it was carried to five columns in all the local media, incredible in the case of athletics.

We talk about athletics, really. Pedro, the father, tells Borja that, apart from an athlete, he has left a very good student in the science branch. "Athletics is a place where it is very difficult to make a living."

Pepe Ortuño corroborates this in the Playas de Castellón. "The problem is always the same: financing."

The club is nothing like a multinational. Your coaches have another job. In its offices there are only two administrative, Jordi and Maria, with morning and afternoon, full of numbers in the head, contracts that come and go. But the difference is that there are so many Mondays in which they return to work happy that they will never be able to forget. The weekends are real mines for the Playas de Castellón, which almost always wins something. The administrators remember then that Pepe Ortuño is right: "Success has a lot of work".

And the success is not only in the elite, in signing Julia Tackas or Álvaro Martín, but also in the quarry, in the Diputación de Castellón College where always have come out and will come athletes like Pablo Torrijos who holds the record of Spain in his specialty. Maybe because in that school is invested in something more valuable than a message to everything or nothing. Sometimes, kindness is more important than demand.

"You have to make athletics more fun for children and parents."

Then, the future will come, because the future always arrives. It will differentiate between those who can be there and those who can not. As defends Pepe Ortuño, it will never be easy to win, "because there are competitions in the face or in the cross". But in these last twenty years the fiscal data of Playas de Castellón are full of titles, hugs, photographs. 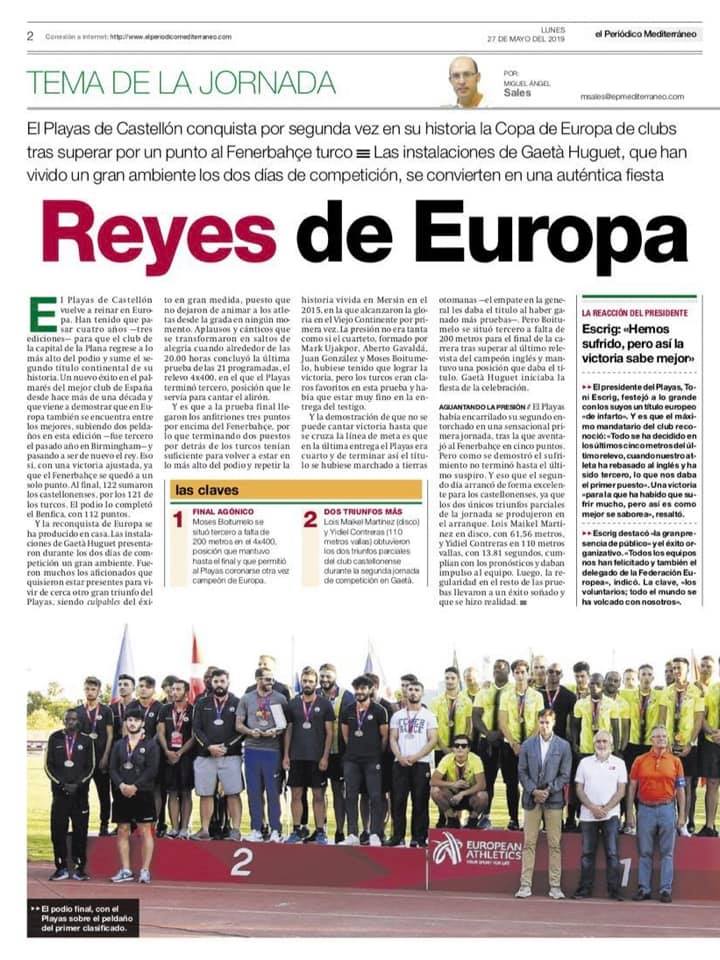 Someday it may not be like that and it will be told: "I lived at Playas de Castellón".

If I continue living, I will remember what one day Pepe Ortuño told me: "Here, victory is not an obligation, but an illusion." So in these twenty years that man, that retired teacher, has never been afraid of that hourglass called success: "I prefer to live with success than with failure".

But success is impossible if there is not someone who imagines it before or who does not dare to go for it, to understand that 'no' we always have it when a new door is called. But at the stroke of trying, with patience, look at what has changed the identity of Playas de Castellón: "16 years ago we had 18,000 euros in budget," recalls Ortuño. "Now, we have more than one million because one day we decided to try to be the best."

That day is not over yet. Neither do you know how far you can go, like all things that have no expiration date. Or maybe it's never over.

From there I could count a thousand things more. I could tell that perhaps the athletes deserve more and that I hope there will be more in the future. I could even talk about the veterans team. And I think I will not find anyone to tell me that all this was not worth it. And not only the titles show it. Also other things that are not listed in the Stock Exchange as I found the other afternoon, in a corner of Madrid through Borja, that 17-year-old kid who lives in Ciudad Lineal: "I would like to run with the Playas de Castellón".