In recent months there has been no coach as successful as him: José Luis Mareca. A unique man in the world who, not being a professional coach, does not charge even one euro to athletes. “I am not here to compete with professional coaches. I have always defended the rights of workers. ”

A 62-year-old man who sometimes doesn't know how to explain. Without being a professional coach, look what I just told. Meanwhile, he is waiting for the relay contract at the Zaragoza factory where he works that should have arrived in December and is supposed to arrive in March. Then he will get the opportunity to retire and close his working life that began in 1972. He was a teenager. Was 14 years old.

Question. I recognize that I envy you: you go from success to success.
Reply. It's the kids who work it out.

Q. So the coach's role is overrated?
A. I don't think that's the word. Not overrated, never, because the coach is the one who helps the athlete to make mistakes as little as possible, and that is not so easy, because, in the end, it is about not being wrong.

Q. I can ask it another way. Are you such a good coach?
A. Coaches are made by athletes. From there I don't know if I'm so good. But I do know that I have been lucky and that I have worked to work that luck, because I like it. I like listening to athletes. It is always said what athletes learn from their coach. But it is almost never said what the coach learns from the athletes.

Q. And how do you get it?
A. Above all, listening.

Q. Is everything listening?
A. No, not everything. But a long time ago, of course. Look, I have learned that one of the most dangerous things is when an athlete tells me, "I feel very well," because then he will always want more. And he may forget that this is not the fundamental time, because each competition is his livelihood, but you can't forget: you know that the fundamental thing starts from March. And you have to try to stop it.

Q. And how do you stop an athlete?
R. ‘Do not go over, do not go over that this can be bread for today and hunger for tomorrow,” you have to remind him.

Q. Then it is a problem that an athlete enters very quickly in form.
A. Sometimes, yes, there is no doubt, because times are what they are. We don't plan the season for December, but for March. But for that I am, to remind you that, although now force less in training, you can also do well in competition. In the end, the important thing is what you think you can do: the mentality does a lot

Q. Could Abbey train itself?
A. It has happened to me. I have been an athlete and an athlete who reaches the age of 28 or 30, valuing what he has done, I think he could train himself. But it is always convenient for someone to advise you, to help you reduce euphoria when necessary or to convince you that you are not so bad when you look bad.

Q. That is a difficult question.
A. Yes it is difficult.

Q. And what do you answer?
A. I always answer that you can. If you have conditions you will not lose them forever. But you have to give time. It is always said that, if one loses a year, one needs another year to return to the one before. And if you lose two, you will need two. And if you lose three, you will need three. But it can be achieved. There are people who have achieved it. Moreover, there are athletes who have left at 22 and returned at 27 with spectacular performance.

Q. That's what it is about.
A. In the end, it's not just the athlete's engine. It is also your environment, it is also your head. But an athlete must also ask himself what he can do to be better. If he asks himself that question, how can you not set an example? But not all athletes are so convinced that they can be better. 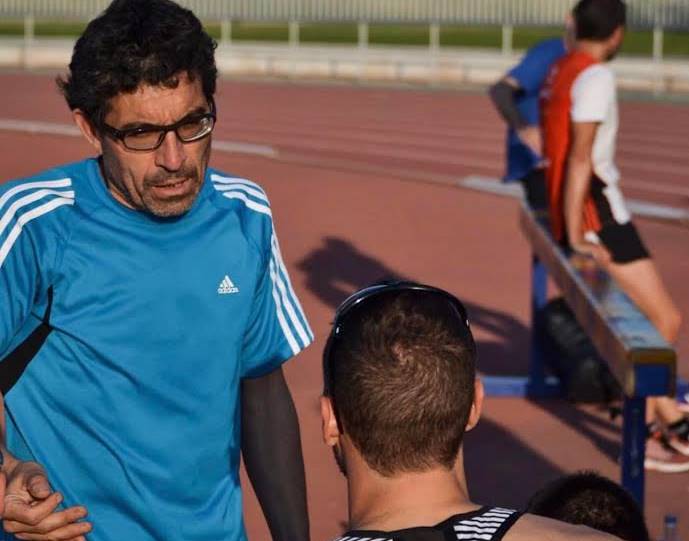 Q. Jesus Olmos could be better than Abbey?
A. Not now, but who knows what would have happened if I had started before in athletics, because by conditions and way of fighting I think so.

Q. Can Camilo be an Olympic finalist in a marathon?
A. It is very difficult, but if he came to the Games and has his best day ... Who knows. He has always competed very well. Adversities also bring out the best in him. But I don't know how to answer that question now. Likewise, the success is that he reached the Olympic Games and, once there, if he arrives, be it 15 or 20, I don't know. I can't answer that.

Q. What has been the best day of your life?
A. Instead of saying a better brand, I keep the Rio Olympics. Then Toni Abadía was in the best form of his life. But he had the bad luck of falling ill. And yet he competed. And it was spectacular as he tried. And as soon as they finished they had to take him to the hospital. And I will always have that day in my heart, because I cried watching him on TV from home. And I cried a lot. I don't know if I cried in anger or emotion at the lesson Toni had just given us. But I cried, even, then when I ran.

Q. Could you still be a better coach?
A. I don't know if I'm good or bad, if I'm better or worse. I only know that I feel honored, that I like people to ask me things and that they believe that I can answer those questions. I think I won that they think like that about me. Also, by asking me they are helping me improve as a coach.

P. You Do athletes call at any time?
A. Yes, of course, and nothing happens, that's what the phone is for. Answer how you would like to be answered when you call to ask a question. It is not so difficult to be kind. It doesn't cost so much to help others. And in today's world with social networks ... what am I going to tell you. Many people I do not know write to me, people who ask me to train him and I always answer to everyone the best I can do.

Q. And what do you say yes or no?
A. I never say no, but there are people I can't say yes, because I see that I am not your solution. If there are enough trainers in your area, it's not that I don't want to, it's that I don't need them. But, for example, now I have been written by athletes from Chile, from Guatemala ... And I have seen their profiles. And I have analyzed them. And the first thing I've asked myself is, ‘Can you or can't you?’ Necesitan Do you really need me? ’And this time I understood that I can help them or try to help them, because I don't have a magic wand. I always tell all the athletes who ask me, be it the one who asks me to get off 3 hours in a marathon or whatever.

P. He has become a universal coach.
A. It is not known where people live whom one can help.

Q. It is also a way to earn money.
R. For me, no. I do not charge anyone. Not even the people I train have ever charged them. I have never intended to do business with this. Another thing is that I was a professional coach. Then it would have been different. But I have not had that possibility. I have always defended the rights of workers: I am not here to compete with professional coaches. I didn't even want athletics to be an extra for me. My work has been another.

Q. But you have dedicated so many afternoons to this life.
A. But I have seen it that way. Another might have seen it differently. But the one who had to see it was me in this case. And it is true that in the last fifteen years in athletics this has come to me that I could not even think about and that, in some way, has allowed me to acquire some rights ... The Federation pays me money and people recognize me. Value what I say and I remember when I started and maybe I have known how to work my luck.

Q. And you don't get mad at the athletes you have not been a professional coach?
A. No. I preferred to see it differently. The money that I do not charge the athletes in some cases has helped them to pay for their studies. And that is very important. I keep that satisfaction inside me. Today, athletes sacrifice a lot and earn very little. And I have never needed that money. I have a salary at the factory and, being as I am, I consider myself a privilege for having lived all this.

Q. I give up.
A. I have invested in personal satisfaction in athletics and I feel well treated. I wasn't looking for anything else because I didn't need more. I don't ask life for great things. There are people who are happy going to the movies in the afternoon; I am running it. Moreover, I am happy when I open the door of my house and see a park, a mountain and a track that I have next to me and that allows me to go jogging. I have dedicated my free time to that and I do not regret it. If I had earned more money maybe I would not have been so happy.

P. Do youWill he go to the Tokyo Olympics this time?
No, not for me, because I would go with my wife and it would be a lot of expense for both of us. And there we cannot or should not get there, because we are not alone in the world: we have a daughter ... But another thing is that they offered me to go. But, in any case, I don't even think about it. Now I think of the partial retirement in my work that, if it does not arrive now, will do it in 2021.