It is a story that looks like something out of an American movie. Never better said. A singular figure, bizarre and who maintains the same tradition that has not broken a single day since 1975, which is said soon. We are talking about a guy known as 'Raven' Kraft (his name is Robert Kraft). He is 69 years old and since January 1, 1975 he runs 8 miles (12.8 kilometers) every day on the beaches of South Beach, in Miami.

Although the Governor of Florida decreed confinement for an entire month since early April, the authorities have given the go-ahead to Kraft being the only person with permission to continue running so you can keep this almost ancient habit. Of course, the ‘Raven’ cannot count on the usual entourage of runners and runners who usually accompany him on his eight-mile runs. He does it now alone. The beach and streets of one of the most mythical cities in the world at your feet.

It hasn't failed a single day since 1975

Nothing has prevented all this time that Kraft has religiously completed that distance in the mornings. Hurricanes, tropical storms, unbearable heat waves have passed through Miami. But he has always been there and that is why the authorities have decided to make an exception. Without a doubt, the 'runner' community in the town of Florida has understood this. There is a true legend. “The local authorities listened to my followers and have allowed me to keep my exits whenever I run alone. First responders and the police know that I have permission to be there. I want to give people hope, "Kraft told the‘ Miami Herald ’. 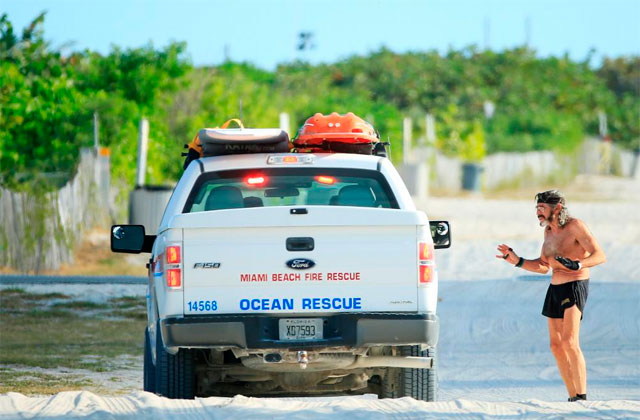 “The only footprints I see are those of the birds and mine. I will continue, every day, if God wants, if the sea does not cover the beach and the coronavirus does not catch me", has added. In fact, Kraft is in favor of opening some way for people to exercise keeping the safety distance and in an orderly way. Interestingly, Kraft was nicknamed the ‘Raven’ when he arrived in Miami from Nashville, his hometown. A group of boxers from the gym on 5th Street where he signed up called him that when he saw that he always dressed in black. Precisely with them he began to practice ‘running’ and he still continues to leave always from the lifeguard station in that same area, Calle 5.