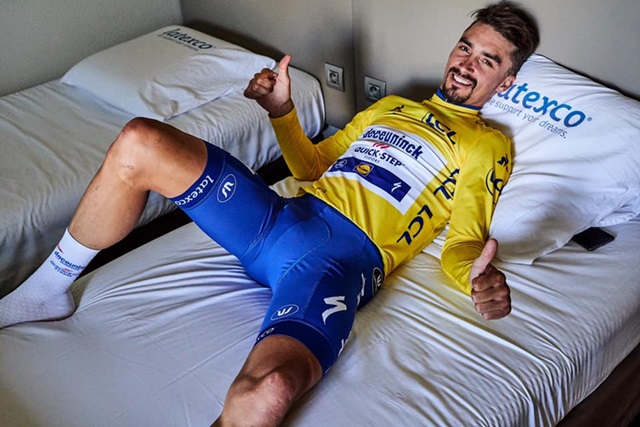 Despite the obvious boom in the sector and the growth of the cycling industry, the Tour de France once again highlights the wage precariousness of this sport at a professional level. How much money do Tour de France riders make?

The most important race in the world will distribute 2,293,000 euros in prizes this year. A figure that apparently may seem interesting but remains embarrassing when you start to shred the regulation.

The Tour de France cash prizes, it should be remembered, are by far the highest of the entire season. If the situation here is precarious, imagine what happens in certain groups in the continental world (what would be a second professional division).

When, with the permission of the pandemic, the twenty-one stages end, the time to cash. The teams will be in charge of collecting the prizes from their runners and in most cases they will distribute them in nine equal parts.

8 for each of the runners and a ninth portion to be distributed among all the staff and auxiliary personnel. A solidarity policy that with certain exceptions and results has been common in recent years.

As shown in the attached official tables the winner of the Tour de France will win 500,000 euros. A fortune yes, but tell me how many riders will win a Tour de France in their lifetime?

From here and out of a well-paid podium (200,000 euros for the second and 100,000 for the third) things begin to decline until embarrassing boundaries.

Being a Top 10 in the best race in the world is paid with 3800 euros, while a Top 20 is paid with a salary of a thousand eurista.

The monetization of the stages is also quite surreal. If running a Tour de France is the goal of any professional cyclist, get win a stage It is a dream that very few can fulfill. The dream is paid with 11,000 euros

A partial Top 10 that allows you to appear in the official television classification, is paid only with 600 euros.

The "secondary" classifications, which lead you to wear an official race jersey, are also of real laugh for certain levels.

Sheath the best junior white jersey in Paris you pay with just 20,000 euros. A ridiculous amount if we take into account that the award is taken on paper by the great promise of world cycling. The same amount of money will win the "super combative" runner of the Tour.

The green regularity jersey and the polka dot jersey for the best climber will award the winner 25,000 euros. A Top 8 in these rankings represents a profit of 2000 euros and wear the jersey for a single day just 300 euros.

Even if the icing on the cake is taken by the complementary prizes.

Leave your skin to crowning the Grand Colombier in first place translates into 800 euros of profit. Being the first cyclist in the peloton to crown a fourth category port means a whopping 200 euros.

All this puts on the table the inequality that exists within the professional group itself. Some cyclists who live mainly from the salaries of the teams but who hardly see their enormous effort rewarded during the three weeks of the race.

Obviously most of them also have agreed premiums with their respective teams but beyond the 10 highest paid cyclists in the world payrolls are not to shoot rockets.

Obviously the gregarious and the rest of the World Tour team riders continue to earn what for a normal worker is a lot of money, but their salary is ridiculous if we compare it with what a football or NBA professional earns.

Cycling continues to expand its turnover, but for the moment the most important race in the world does not seem willing to improve its economic remuneration.

For a country like France, is the media impact of a Tour de France so far from that of Roland Garros? If the second one distributes more than 40 million in prizes, why the first one barely exceeds 2?