News : The sincerity of Mariano García: “I am always very nervous in the race” 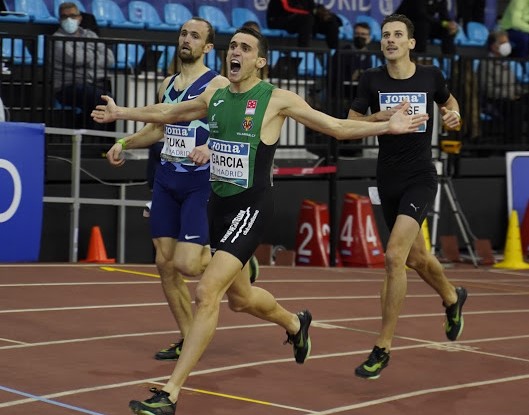 A week after falling his way in the European Championship in Poland, Mariano García is in Sierra Nevada. Accept their way of being. “I have assumed that I am a little crazy. And sometimes the wires get crossed. But I’m not a pimp. ”

A week has passed since Mariano García fell in the European Championship in Torun (Poland) like a brave man or a suicide bomber.

There are interpretations for everything, but he accepts that I tell him that what happened made me personally angry.

– I always get nervous but this time I got even more nervous because when they hit me in the race I thought I was going to the ground and I had to make a decision at once. And then I decided to start running like crazy.

– Did your cables cross then?

– They cross me sometimes, I have to admit it. But this time I can’t regret it because I pulled forward and did it without fear and I got as far as I did and I was so close. But, of course, that is not valid.

His coach Gabi Lorente scold him.

“But Mariano is very impulsive,” he reasoned, “and that is what I try to instill in him, that in 800 you have to be calm. But even if he repeats it a thousand times, when he has that impulse … “

“Well, yes, he’s right,” Mariano admits. I know that I failed, I know that I did the opposite tactic of what my coach had told me, but when you change the chip suddenly there are things that cannot be held and in Poland …

– There are those who thought it was cockiness on their part.

– I have assumed that I am a little crazy but I am not a pimp; a pimp no, never.

– And how is his madness?

– I know that sometimes my head goes off, that the one in Poland is not the first time that my head goes off and that it might not be the last. But I cannot renounce who I am. It is what has allowed me to face the best. I don’t think I have to ask for forgiveness.

Mariano García is in Sierra Nevada to start over, to prepare for the summer.

– But to win you also have to do crazy things. There are Olympic champions who have done it and won it. In fact, in Poland, if I hadn’t run out of strength on the last straight, I would have qualified. That’s why that point of madness that I have does not scare me. I think it will continue to help me in the future.

– Speak as if he were a great.

– I am not, but to become one I have to think like a great. You can’t think, ‘this is better than me’, because then you won’t get far and I believe that I can get there, that I have to get there.

– And how do you get there?

– What did you discover in Poland?

– What will you do at the Olympics?

– Well, first I have to get the square.

– It is clear that if you do not believe in it you will not achieve it. But there is also the option of not getting it. You have to know that anything can happen. That’s why the important thing for me is to get home and for my parents to tell me ‘don’t worry, Mariano, you’ve done well’.

– Do you push yourself a lot?

– Not because? In competition it is not about putting pressure on yourself but about showing what you have trained. That is why I leave the pressure to others. Who was going to tell me as a child that I would be where I am now? I have been fortunate to become a practically professional athlete. Although I will never neglect my studies, now athletics comes first.

– My only mission is give my best to the last inchWhat do I say, down to the last millimeter.

– And you’re not afraid?

– And are you not afraid of disappointing like in Poland?

– It’s just that I didn’t disappoint anyone either. I was disappointed, I disappointed my coach and when I got to the hotel and called him he asked me how I was doing, I apologized, “Yes, I know, Gabi, I know I messed it up.”

– Well, if you like, we are not going to insist any more on what they are going to call our attention.

– Not so much anymore. I’m not the 20-year-old anymore. Now I am 23 and I am already 800 years old. But I want to believe in myself so much. I want to think that I can achieve it and to do it what interests me is to improve in each training session, to seek the best of myself, to enjoy it. If I improve training I will improve competing.

– And has he improved training?

– Sebastián Coe’s father let us know that “a bad competition is always a good training session”.

– What will happen in your next competition?

– I want to get rid of the bitter taste that Poland left me. But at the same time it was a lesson for life. By brands he had to have reached the final. Just the opposite of what happened in Glasgow two years ago, where nobody knew me and I was fourth in Europe. That is why 800 must be respected so much. The one with the worst mark may be the first to finish.