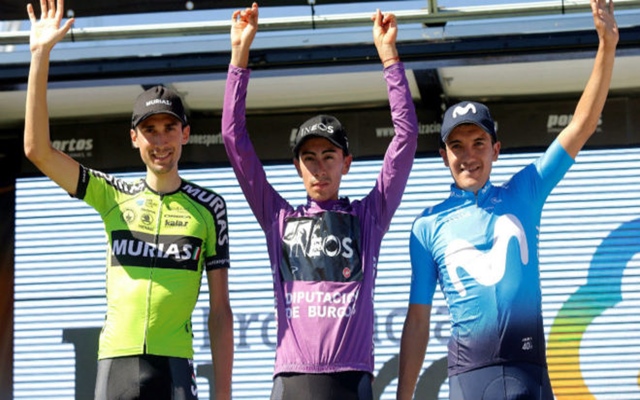 Little could I imagine the direction of the Back to Burgos that his round would be the one chosen to kick off the "new" season of professional cycling. The Burgos race is a classic in the competition calendar and under normal conditions a perfect lap to finish polishing the shape point in view of the Vuelta a España.

For years the Back to Burgos It has been the point of union between the Tour de France and the Vuelta but their participation and media repercussion has never reached this year's levels.

The fate and pandemic of the Covid -19 have wanted it to be always interesting. The 5-Stage Tour will be put together in an unpredictable way in the limelight in this year's edition. The Back to Burgos 2020 It will be the best in history and that is that both participation and stages and the desire to return to enjoy high competition cycling make me foresee a nice show.

Tour around Burgos 2020. Stages and profiles

The edition with the best participation in history and which will take place between July 28 and August 1 will follow the usual format of recent years. 5 colorful stages with alternatives for all runners. A winding and warm route that will serve so that some of the best teams in the world begin to make contact again with the highest competition.

A total of 22 teams, 14 of the highest category, 6 of professional contintental and 2 continental will be responsible for elucidating (with the permission of minor races such as the Sibiu Tour) the "new normal" linked to competition cycling.

First stage more complicated than it may seem a priori. Nervous stage for two obvious reasons. End uphill and on cobblestone ground. As if this were not enough, the nerves and tension of any start to the season will add. Teams and riders will want to quickly demonstrate that they are in top shape. We will see if the height of the Castle with 900 meters at 6.1% is enough to rule out the purest sprinters. A pity the loss of Burgos Carlos Barbero due to injury. The Spanish adapted the ending to a thousand wonders. Sam Bennett, Arnaud Demare, Giacomo Nizzolo, Fernando Gaviria or Matteo Moschetti They are among the favorites. If the end becomes tough racers like Stuyven, Aberasturi, Trentin or Lobato they may have their chance.

The second stage is not much of a mystery and is the only real chance to see the fastest men in action. The above mentioned sprinters could be joined by a Mark Cavendish who, for the first time, steps on Burgos. The arrival at Villadiego is not excessively complicated.

We reached the third stage with the already classic climb to Picón Blanco. A demanding rise in 7.9 kilometers at 9.3% of average slope. An extremely demanding stage that will begin to elucidate which runners arrive in shape after the break. The stage can be even more decisive than the arrival at the Neila Lagoons. Picón Blanco has already seen big names like Mikel Landa, Miguel Ángel López and Ivan Ramiro Sosa win.

Names such as Mikel Landa's own or Alejandro Valverde's shine with their own light among the long list of candidates. Aru, Majka or Nairo Quintana or David De La Cruz they could join the party.

The stage on Friday, July 31 has a more interesting ending than it seems on the stage profile. The last few kilometers are very twisty and they have a road in slightly ascending terrain. Although everything indicates that we will see the fast men in action again it would not be surprising that more than one made the end long. The placement and management of energies are presumed key.

The climb to the Neila Lagoons could not be missing either in the Tour of the Tour of Burgos 2020. The mountain has become a classic and the best option to end the competition. Hard ending to see the best climbers in action. Last chance to make up time, win the race and get on the podium. Runners must give their all until they cross the finish line. We'll see if Ivan Ramiro Sosa He can add his third consecutive victory in a talismanic final for the Colombian from Ineos.

For more information regarding route, schedules, step controls, equipment or race management, you can download the road book through the following link.

Teams Back to Burgos. Favorites and "outsiders"

The entry line-up is truly luxurious and has little to envy at a World Tour-level event.

Although teams like Education First, El Lotto Soudal or Cofidis are missing, the Burgos round will have some of the best runners of the moment.

Men like Matteo Moschetti, Juan Sebastian Molano, Jasper Stuyven Nacer Bouhanni, Juanjo Lobato, Jon Aberasturi or Ricardo Minali They are other runners that could surprise at some end.

Much expectation also around names like that of the world champion Mads Pedersen or Belgian talent Remco Evenepoel.

For the general and high mountain stages, the names of Landa, Carapaz, Quintana, Bilbao, Majka, Gaudu, Aru, De la Cruz, Yates or Valverde who already won the tour of Burgos in 2004. (16 years ago!)

The winner of the last two editions, Colombian Ivan Ramiro Sosa will have a hard time revalidating the title.

The list of registered for the Tour of Burgos 2020 It has not yet been made official. It is expected to do so in the next few hours. You can check the provisional and final Startlist in Pro Cycling Stats.

Television, schedules and where to watch the Tour of Burgos 2020

The Tour of Burgos 2020 will start next Tuesday, July 28 and will end on Saturday, August 1. All those who want to see the Tour of Burgos on television You can view in direct the 5 stages through Teledeporte and regional channels such as ETB.