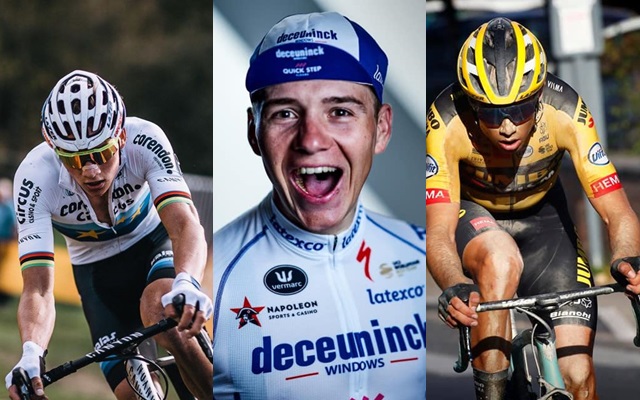 It is undeniable that something is changing in the world of cycling and it is that the emergence of Evenepoel, Van Aert and Van der Poel it has completely revolutionized the international scene.

The golden trio, which personally and in the absence of a fourth, I have baptized as the 3 horsemen of the apocalypse, points out that it will probably be the most talented baked in history.

An insulting physical condition, a predatory nose and an innate ability to read the race are some of the main qualities of these 3 wonder children.

With such a great deal of talent on the road, it is only natural for the successful generation of 1990 to take a back seat. The Sagan, Kwiatkowski, Matthews, Quintana, Bouhanni, Aru, Pinot, Bardet or the retired Phinney looks just 30 years old and compared to the golden trio, runners from the past.

The 3 horsemen of the apocalypse they unintentionally misrepresent their platoon mates. They make what is extremely difficult seem easy.

Capable of winning in all areas, they come to confirm what is an open secret. Cycling is becoming a more complete and demanding sport.

To many the media "boom" of these 3 names will have come again. But I can assure you that those of us who follow the news of this sport in detail had their surnames marked in fluorescent.

Nobody has achieved what these 3 twenty-somethings have achieved in lower categories. Their progression as cyclists has been meteoric and their overwhelming dominance before reaching professionalism augured great things.

If Van der Poel and Van Aert divided the world and European championships of the different modalities (road and cyclo-cross) at the rhythm of a military dictatorship, Evenepoel laughed at their theoretical rivals.

I say "theorists" because Evenepoel has not found anyone to take away his sleep. Remco, who became fond of cycling just 3 years ago, is a supernatural talent. A unique boy, touched by the magic wand and who became captain of the Belgian U16 soccer team.

In just 3 years he has gone from putting on his shin guards to literally destroying people like Valverde, Landa or Fulgsang.

They say the comparisons are hateful, but honestly I had not seen anything like it.

That a 20-year-old boy wins with this superiority is something new in cycling and practically in the world of sports. Beyond the swimmer Katie Ledecky or Luka Doncic, it is difficult for me to identify other names that in recent years have made such a difference at such a young age.

All 3 have the quality to win what they set out to do. In fact, all of them already have in their important classic showcases such as the Amstel Gold Race, the Strade Bianche, the San Sebastián classic or the Milan Sanremo itself.

Personally, I would recommend that you prepare for a total and absolute tyranny when it comes to one-day races. Everything points to that the 3 are going to distribute the great monuments of cycling in the next years.

The best of all is that far from boring us this tyranny is going to amuse us. His running, at the moment, is dynamic and aggressive. They are not afraid of failure and coming from the mud and the Belgian / Dutch school I would be surprised if any of this will change.

The 3 are motivated by the show and the connection with the fans is worth studying.

Wout Van Aert, the oldest of them, is barely 25 years old, while Evenepoel has only turned 20 this year.

I could go as a scholar and jump in the pool with precocious predictions and records, but for the moment I'll just enjoy the show. Nobody, absolutely nobody, knows the roof of these young talents.

Talking for the sake of talking leads nowhere and the words are blown away by the wind. For now, the best we can do is see how they consolidate their reign to pedal rhythm. Cycling 2.0 is a reality and I only have the doubt of knowing if all this will also reach the grand tours.

Much is being speculated about the real possibility that Van der Poel, Van Aert and especially Evenepoel could win a three-week lap.

As I have commented previously, it would be audacious to discard them for anything. We still don't know how your body is going to respond to a 21-day effort and none of them have finished a great lap yet. For now, Evenepoel's poker this season already scares half the squad.

Giro, Tour and Vuelta are big words and although at this point I would not be surprised at all, Bernal, Roglic, Dumoulin and Pogacar they won't make it easy for you.

It seems complicated that today the cyclocrosmans (Van Aert and Van der Poel) can overcome the mountain with the best, while Evenepoel, being the best climber of them all, generates certain doubts in long and high-altitude passes.

However, at their age the margin of progression is so high and their time trial skills so good that they have more than deserved the “wannabe everything” label.

It would not surprise me if Van der Poel will take the Olympic gold on MTB and on the road, that Van Aert will rise before his thirties with all the monuments or that Evenepoel will take his first Giro d'Italia.

People are obsessed with comparing them. In positioning them as the new Merckx, in saying if one is better than the other and it seems that if you belong to one you cannot be the other.

I am from Van Aert, Van der Poel, Evenepoel and any cyclist who has the merit and the difficult ability to make me get up from the sofa at 4 in the afternoon after a copious Sunday lunch.

Long live cycling and long live the 3 horsemen of the apocalypse.