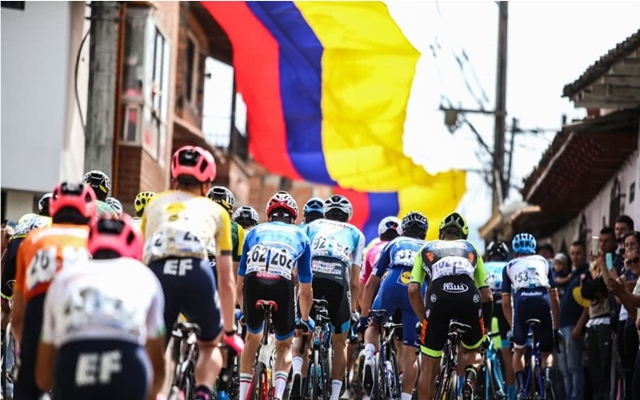 Last year the Colombian cycling He touched the sky with the hand of an Egan Bernal who won his first Tour de France.

The runner from Ineos finally brought the longed-for yellow jersey to the coffee country. The # dream yellow became a reality and Colombia fully entered the world elite of cycling.

A country that has been doing things well for years and that finally sees the enormous effort of its national athletes rewarded.

Cycling awakens great passions in the South American country and good proof of this is that the Bernal, Quintana, Urán, Fernando Gaviria and company are considered great celebrities.

It is undeniable that Colombian cycling enjoys magnificent health. The number of Colombian professional cyclists continues to grow and their average level is higher than in most European countries.

In addition, the excellent results that continue to accumulate in lower categories suggest a more than promising future. The only question is whether one day we will see a Colombian fight in races like the Tour of Flanders, the Paris Roubaix or the World Time Trial. The road will be long, but for the moment the irruption of runners such as Gaviria, Molano or Hodeg confirms that South Americans are there for more than just climbing big mountain passes.

At the gates of another Tour de France and faced with the difficult task of revalidating the champion title, it is time to analyze the real beetle options in this edition.

For the first time in his short but intense sporting career, Egan Bernal arrives as a favorite in a Tour de France.

The Ineos rider will also have to deal with the pressure of leading the British team. Froome and Thomas's casualties leave him as sole leader for the race.

Bernal has shown a certain ease in competing under pressure on several occasions. The one from Zipaquirá will have the help of experienced runners such as Kwiatkowski, Amador, Castroviejo or Van Baarle. In addition, theoretically you will also have cyclists of the stature of Richard Carapaz or Pavel Sivakov at your disposal. Although I would not be surprised if these last two ran a little free and against.

I personally still think that Egan Bernal has several Tours de France on his legs and that despite the emergence of talents such as Evenepoel or Pogacar he has everything in his face to mark an era.

An innate facility for climbing is his great virtue and if Bernal wants to aspire to his second Tour he will have to make a difference in the high mountains.

The one from Ineos must reach the final time trial of the Planche des Belles Filles with a certain margin. A stage that on paper is more favorable to Roglic or Dumoulin.

Previous races have shown that Bernal is probably not at last year's level And although the Tour de France is 3 weeks of competition, it is predicted to be complicated that it can make great differences to other climbers such as Landa, Quintana, Pogacar, Pinot or Bardet.

Also, if Roglic finally recovers and injuries do not prevent him from performing at the level of Dauphiné and the Tour de l’Ain It will be very difficult for Bernal to hold the Slovenian's stakes in the last kilometer. The Jumbo Visma is more explosive and this can cost you at certain times a few precious seconds in the general.

In any case and with such talent we can expect anything from Egan. The 23-year-old cyclist can also benefit from the irregularity of other cyclists who aspire to do a good general.

Egan Bernal is not going to be far from the only Colombian cycling bullet in this Tour de France. Colombians have very high level runners and cyclists like Quintana, López, Urán or Felipez Martinez are serious contenders for the final podium in Paris.

Quintana will run a Tour de France for the first time outside of Movistar and this undoubtedly relieves him of a lot of pressure. Nairo will lead Arkea, but his media coverage and his demands will be far from those he had on the telephone team.

Quintana was one of the pleasant surprises at the start of the season and if he recovers his level he can be with the best in the mountains.

For his part Superman López debuts at 26 years in the Tour de France. The cyclist from Astana already knows what it is to step on the podium in the Giro d'Italia and in the Tour of Spain, so I would not rule him out as a contender for the Paris box.

Rigoberto Urán continues to perform above the expected level, and you can expect anything from Rigo. Your best years seem to have passed, but it can play a very important role in the race and why not aspire to a stage victory.

Felipe MartinezDauphiné's recent winner may be this year's great Colombian cap. The Education First rider has recently shown excellent form and, at just 24 years old, is already mature and solid in three-week laps (he played his first Giro d'Italia when he was just 20 years old). The current national time trial champion also has a rather fast finish that could give him some partial triumph.

Another rider, like Esteban Chaves, who returns to the Tour de France 3 years later, can take advantage of the vigilance of the favorites to add some partial victory to his particular locker.

For now, Colombia will have to limit its aspirations in mass arrivals since neither Fernando Gaviria nor Alvaro Hodeg appear on the pre-registered list.

In the absence of official confirmation, it is very likely that we will see three Colombians within the same team.

Education First brings a gala 8 with runners for all terrains and among them the presence of 3 beetles stands out.

Daniel Felipe Martinez, Rigoberto Urán and Sergio Higuita They will be in principle at the Nice game and their participation can enliven the race at certain times.

None of them start as a great favorite, so they will have to assume a role of "outsiders" that can benefit them enormously.

The American team has never been known for its great collective gifts and I would be surprised if this Tour de France was the exception.

The 3 Colombians are climbers, but they are also very fast in small groups.

Education First has three Colombian cards to play and I would be very surprised if the three of them went home empty.