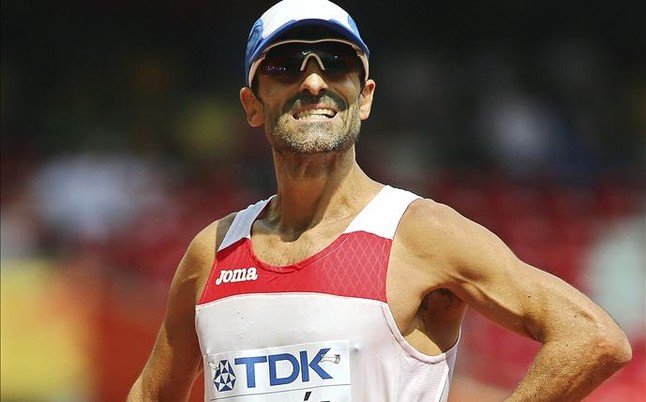 In the Spotify era, there are athletes in veterans' championships who still listen to their children tell them ('dad, win for me'), who invite us to learn from them and remember 'La la Land': "Let the rebels come, the waves made by the stones. Painters, poets and plays. "

I really do not know. It might even be impossible to answer that question, because there are veteran athletes of all professions: policemen, pharmacists ..., even retired or unemployed, men and women, at 1 and 1,000 km away, to whom this passion for competition helps them live and maybe to be better people.

That is why this is dedicated to all of them, "to all those dreamers, to all those fools without remedy, to all those hearts that suffer and all the chaos they cause ", as they sang Ryan Gosling and Enma Stone, Sebastian and Mia in 'La la land'.

That's why today it's all about ordering food at home or raising the curtain of a scenario in which even old elite athletes inhabit like the Esteso brothers. One of them Juan Carlos has been able to write after the Spanish Masters of Sagunto championship this weekend that his son Álvaro, that child who grows and grows, is able to tell him: "PAPA, WIN FOR ME".

And that phrase also deserves to be taken to the cinema.

And it could be a very emotional film capable of pulling the most valuable thing that exists in the world: emotions. If it were not for the emotions we would not see movies or open books. We would not go to places that scared us or there would be photographs with hugs and we would never say: 'I miss you'.

Nor would we count our battles and then it would be a problem. It would be like never talking on the phone.

And personally, I do not only like to write. I also like to read because reading is gaining time, understanding that it does not matter that at those ages you can not run as fast as before: happiness is another thing, happiness is also to face time.

Doctor Carlos Pindado Jiménez recounted it beautifully when explaining in social networks the photograph of a friend of his with the medal of finisher: "Goose-flesh. What does this photo mean? It means the dream fulfilled by a friend, it means to overcome two years of difficulties, of resignations, of pain in silence and overcoming. Today, without a doubt, I am happy for you. "

So today I declare myself happy to read these things and that those things give permission to one to write this story: to all those emotions that open our eyes. You have to understand the ability of others to get excited about things that do not seem so exciting to you. Suddenly, today I read that man, Suso Alamo (who passed the 800 in 1'07 "and 1'04") in the Spanish M-50 Championship, assess the photographs of this championship as "a great memory to teach to the grandchildren and it will not be long since I'm going to be a grandfather ".

As I understood a long time ago, from the first day I stood in front of the keys, writing is putting yourself in the shoes of others. So I'll remind myself of Enma Stone in the movie when she sings "Let the rebels come, the waves made by the stones. Painters, poets and plays. "

I do not imagine life without them.

I do not imagine then the park of Arcentales without José Ramón Herradon insisting on running that 800 below 2'40 "with 59 years and a work life in which every day those arms of his raise so much weight.

I do not imagine life without these battles in discount time, without these veteran athletes whose heart continues to specialize in beating fast, without that policeman Juan Antonio Ramos from whom I said goodbye one Saturday at nine o'clock at night after running a 10,000 in 34 '00 " The next morning I had a training of 50 km at 4'15 "/ km to prepare the 100 km of Santander. As I told my son, when we got away from him, did you see the brightness of that man's eyes?

Children sometimes notice things that we do not imagine they will notice.

21 days later, we read on social networks that Juan Antonio managed to be the 100km champion of Spain in his category. He entered the goal embraced by a flag of his town after 7 hours running.

That's why today I write about him and people like him. And I remember what I read not so long ago in the biography of Francisco Javier Barril, who is also a veteran athlete: "When everyone has stopped, we will continue running."

And it does not matter if the night falls.

I remember then that time when I read thatto life are two times of 45 minutes and that in the last minutes of the second part you can also win games.

And then I remember Sergio Fernández Infestas, who is going to turn 64 this month and who has not won battles for a long time now. Maybe it is unfair that he wins more or maybe he has already won all the votes and for having.

However, Sergio never fails in the stands of these championships that he does not conceive "Without those dinners in which to share anecdotes and laughs with some of my current great athletic friends ... And if the most outstanding member of the group, José Rioseco, had just achieved a WR in 2000 obstacles then the happiness already doubles ".

Because maybe this is a world in which to stay to live and learn from miraculous beings like that, José Rioseco, capable of running a 2,000 obstacles at age 77.

And in the outskirts ultrafondistas almost new born for the cause like Nicolás de las Heras, who are still running. This man from Avilés at 53 years old came to run 257 km in 24 hours working in a pharmacy.

And so many people.

And finished. I finish this chaos that I have mounted in a moment. I end up in a scenario where the lights barely work. I finish with all these people who know how to stop January. I finish remembering the son of Esteso ('PAPA, WIN FOR ME?). I end by thanking all these guys and going back to that night when Mia tells Sebastian what's the point of opening a jazz dump in the Spotify era:

-It sounds very nostalgic. Do you think that people will like it?

And if 'La la Land' does not apologize for it, I think we should not do it either.