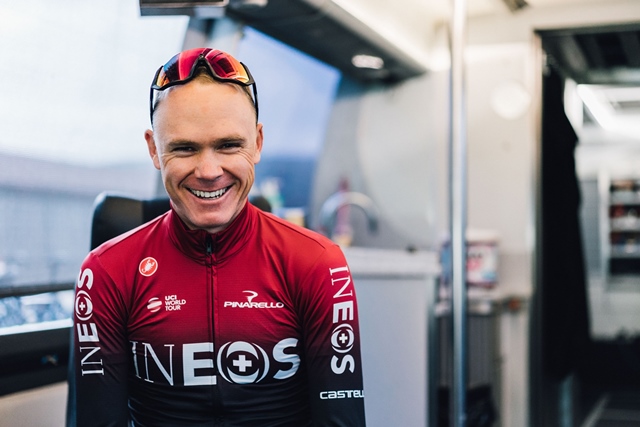 Sports Interest or economic convenience? This is the first great reflection that came to my mind after knowing the Chris Froome signed by the Israel Cycling Academy.

The best man in the past decade and one of the great dominators of cycling history changes his tune. Froome leaves the captaincy of the Ineos to start a new adventure in the tumultuous waters of the Israel Cycling Academy.

I would like to point out, as the official press release does, that the Brit gets off the team bus after a mutual agreement between the two sides, however I think I would be lying to myself and the readers if it did not at least reflect the perception of what Brailsford kicks Froome off the team.

Too much rooster in the same chicken coop and it is that the golden trident formed by Bernal, Froome and Thomas should not be easy to manage.

As I pointed out on previous occasions, it was an open secret that Froome would leave Ineos. Three factors have been the triggers of this surprising decision.

Bernal's irruption, Froome's terrible injury and the death of Nicolas Portal. Froome had lost leadership and was beginning to feel like a great guest in someone else's house.

As far as economic management is concerned, I have no doubt that Froome has moved correctly. At 35, he was looking for the last big contract, and although the exact conditions of the agreement have not been disclosed, it is evident that few teams were in a position to assume a payroll of these characteristics.

Furthermore, the Israeli project is practically the only one on the World Tour that wants to continue growing. The rest is content with staying among the elite.

He has great blame for all this Sylvain Adams, co-owner of the team and one of the richest men in the entire country.

Without going any further, the well-known Forbes magazine estimates Marcel Adams, Sylvain's father, a equity of more than 1.6 billion dollars.

With this portfolio it is not strange to think that the team will be reinforced with other renowned signings. Adams has already declared his commitment to build a support team for Chris for the Tour de France.

I wouldn't be surprised at all lupon arrival of Richie Porte. The Australian ends his contract with Trek later this year and I can't think of a better luxury gregarious.

A perfect situation for Froome to reunite with a great friend and faithful squire on his first 2 Tours.

Today the team remaining for 2021 is quite weak. Beyond Dan Martin or Ben Hermans few runners would be in a position to wrap Froome in a mountainous finish. If Froome wants to have a competitive level, he knows that they have to surround themselves with the best teammates. Bardet or the Yates brothers are other runners who have not renewed with their respective teams either.

As far as sporting interests and claims are concerned, I would honestly be very surprised to see Froome win a Tour de France outside the Ineos structure.

On the one hand, due to the inexperience of the whole of the Near East and, on the other, due to the arrival of great names such as Bernal or pogacar.

Although I would love for Froome to win his fifth crown, I find it complicated that when he is 36 he is in a position to outdo the Slovenian and the Colombian.

Bernal is still young but the level shown last year, little to envy the best version of Froome. Egan has it all to dominate cycling for years to come and it was only fitting that Brailsford would go for a rider who has yet to turn 24.

It is impossible to anticipate what will end up happening, but what we can be sure of is that Froome finds in Israel what he was looking for so much. The unique leader status that allows you to prepare, plan and run as you like.