The national record is already 33 years old, achieved by an Olympic medalist of 1,500 as José Manuel Abascal in La Albericia (4'52 "40). And it is true that there are hardly any tests of this type, but why not return to them now that the Vallehermoso stadium is going to recover?

Today I am going to return to the year 86, on September 7, 1986, to the old track of La Albericia in Santander, where that day did not fit anyone else. A madness in a stadium that was then preparing to see something unique, with the TVE cameras witnessed. It was not a mistake. 33 years later, nothing like it has been seen again. The national record of 2,000 meters, that Sunday imposed by José Manuel Abascal, is still there: 4'52 "40. It is true that tests like this are hardly done, but 33 years are many years so as not to thank him again. Today, even, I risk to ask which of the athletes of now would be able to beat it. I would like someone who reads it to feel capable, identified.

We speak of major words. No doubt. Abascal was then a 28-year-old athlete who a month earlier had run in 3'32 "at the Brussels rally. Two years before, he had been bronze at the Los Angeles Olympics completing that memorable podium: Coe, Cram, Abascal. In fact, if there was an indomitable character it was he, José Manuel Abascal, capable of training without a shirt in the Picos de Europa, where he discovered a kilometer of absolutely flat grass, at 1,600 meters of altitude, next to cows, sheep and horses, in which today the only thing that has changed places are the stones. The rest remains the same, including his memories that are those of a man born in Alceda, in the skirt of the port of El Escudo, son of transhumant, who, before being an athlete, devoted himself to unload sacks of sugar from ships to win some money. Maybe that's why his was a race so well taken advantage of. In the eighties, Abascal had a cache of € 1,800 per race, incredible.

But the fact is that today I place myself on that day, on that old track in La Albericia, where Abascal's idea was to beat his own brand, which was then at 4'54 ". I had to pass the 400 in 58 seconds; the 800 in 1'58 "; the 1,000 in 2'27 "; the 1,200 in 2'57 "and the 1,600 in 3'56" and play everything to a letter in the last 400. He had two hares like Antonio Paez and Avelino Hidalgo, who understood quickly that something great was going to happen that morning. Abascal shouted at them, 'throw more' after passing the 1,000 a second over: 2'26 ". But that day Abascal felt full. A day before, I had found the motivation, which was lacking in that end of the season, when I arrived at La Albericia and saw three TVE trucks parked on the outskirts. His head anticipated the future, which is often the best way to achieve what one wants.

The race was at twelve in the morning. But Abascal, who had a hard time moving his muscles, He got up before dawn, at six in the morning. It went out to roll at this hour 20 minutes very smooth to the track, with four 80-meter progressions. Then, he went to breakfast at Picos de Europa cafeteria. Everything was natural, including the tension of that athlete, who undoubtedly had something different. Up there, in that flat kilometer of the Picos de Europa, each stone was marked with paint, every 100 meters measured by himself with a tape measure, everything to the millimeter. And, besides, there was a lake of cold water next to it where, in the absence of a masseuse, he put his legs to recover.

Abascal passed the 1,500 in 3'39 "in La Albericia and was already alone. The two hares could not do more for him anymore. But the stadium, embracing the feat, was not resigned to that it did not end well. Abascal's stride allowed desire. That September 7, 1986 was going to finish the last 400 meters in 56 seconds. 33 years later, watching the video is still getting excited: we do not need soundtrack. Abascal was the portrait of the athlete who, without being a superclass, was gradually achieving everything that was proposed. He has always defended that, above all, he was a tough guy, stronger than fast as he had shown at the Los Angeles Olympics where the three races (first round, semifinal and final) were played in three days in a row. He killed others. He was doing fine. 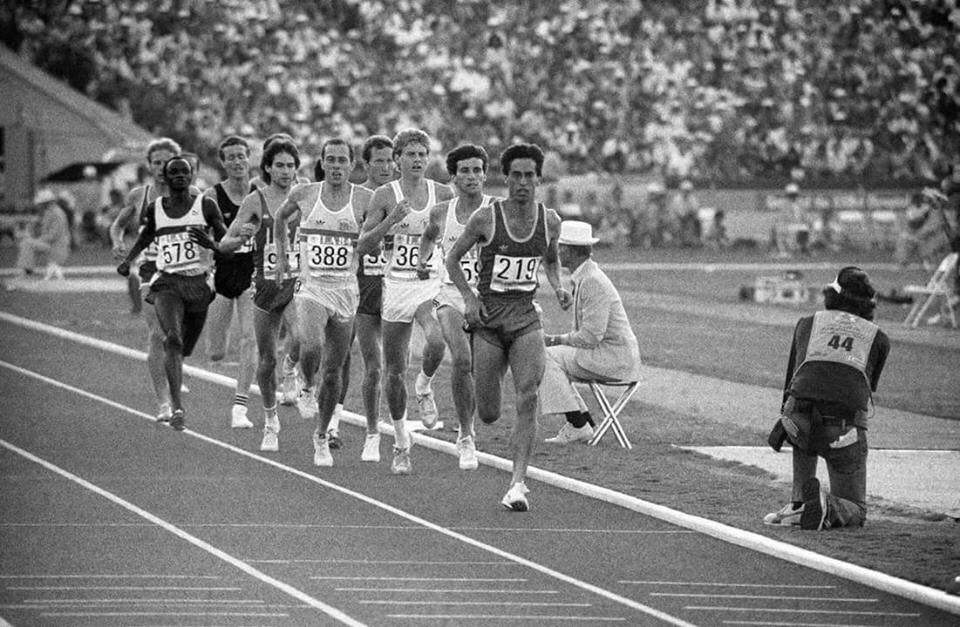 José Manuel Abascal is today a 61 year old man and it will never be a coincidence to meet him talking about athletics. Today I have chosen that day as I could have chosen any other. But he is emboldened to talk about records that last 33 years. Moreover, it occurs to me that now, that a mythical stadium like Vallehermoso is going to reopen, it feeds one to ask for the return of tests like this one of 2,000 meters. He would have his thing, because the coaches agree that "This is a record of the difficult ones", only suitable for athletes with 3'35 or 3'36 "in 1,500. And even then it will still not be easy: 4'52 "90.

But if life is a challenge, if it is almost always about improving what was done one day, go ahead. Here we are to explain that there are memories that deserve to be shared like José Manuel Abascal and the things he did for this sport that unites this community of ours. Therefore, if I were you, I would look for a while and see the video of that day. There you will find a man who was not only a winner. He was also about to be a prophet in his land and that at that moment he was going to stop the time for 33 years.

Maybe that's why a few weeks ago it seems to me that the world became a fairer place. Then I read Abascal on his Facebook user that a producer had proposed to him "to film a film internationally" about his life. He is more, excited and surprised, added that the film has already started "the process of preproduction, with preparations such as the search of locations, runway, script, shooting plan etc". And I would like to assume that at some point that film must go through the track of La Albericia. He will then return to September 7, 1986.