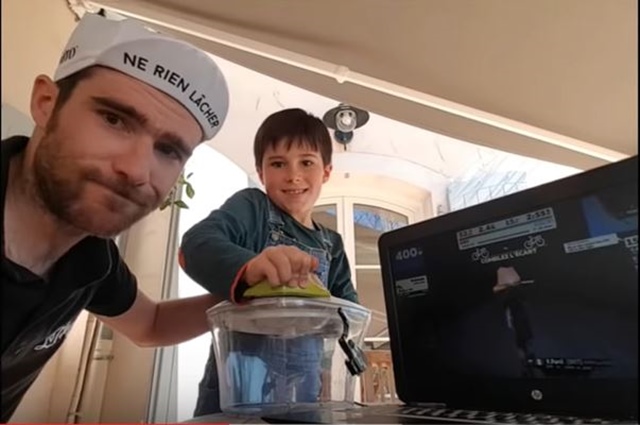 When it seemed that we had seen it all and that the Zwift cheats had run out of ideas to win races, a true masterpiece has arrived.

Lowering the rider's weight, hiding the pulse or modifying the watts of power is something for amateurs next to what this French rider has achieved.

If the invention is surprising, it is still more author. Romain Feillu, former French professional cyclist and who in 2008 got to wear the yellow jersey of leader in the Tour de France, has brought out its best technological skills.

To the good of Feillu it seems that his retirement, just 4 months ago, and the confinement at home have suited him wonderfully to give a touch of humor to the current situation.

The former cyclist, brother of Brice Feillu, has home-made a mechanism to destroy all your rivals without using a drop of sweat. With this fun system with which he has been able to pair a cadence and speed sensor with a salad drainerFeillu can easily roll above 400 watts with a simple flick of the wrist. Power more than enough to win virtually every Zwift race you set your mind to. The prize for the funniest invention is already guaranteed!

Seeing this and taking into account that a few months ago the first sanction for virtual doping arrived, I take the opportunity to ask a question. Does virtual cycling really have a future at a competitive level?