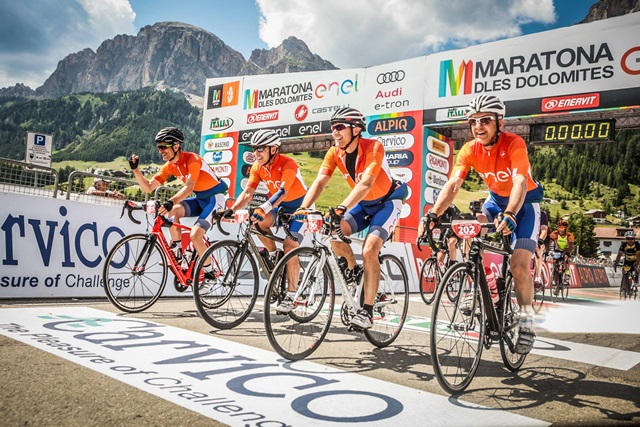 It's time to remove the leaves from the margarita. The moment to resolve the eternal doubt of many cyclists and cycling fans. Would an amateur cyclist endure a stage of the Tour de France?

Before getting into the subject, I would like to contextualize the question and the situation a bit, since the queen stage has little to do with a transition day or the final walk in the Champs-Elysées in Paris. Both are stages of the Tour de France, but the physical demands are totally different.

Yesterday we lived probably one of the most boring stages in the history of the Tour de France. The total passivity of the runners It was harshly criticized in the networks and at no time did we see the usual combativeness of the cyclists challenging the tiresome pace of the peloton. In fact, for the first time in a long time, not even the classic getaway of the day was formed.

There was no escape, there was no fight and there was no show beyond a final sprint in which Wout Van Aert triumphed (curiously one who usually leaves his soul on the bike).

Faced with such a television grotesque it is normal that more than one fan (I was the first) had time to wonder if I would be able to keep up with the peloton.

So curious as usual, I decided to take advantage of technology to search Strava for data that could confirm or disprove this theory.

Obviously, everything that follows is tremendously general and subjective. To begin with, the "amateur cyclist" is very relative. An amateur cyclist can be an amateur or a high level cyclist who easily approaches the 5 watts per kilo of weight in an FTP test But the amateur thing can also be valid for a cyclist who goes out to breakfast a couple of times a month. They are all amateur cyclists and they all deserve my respect.

With the intention of guiding the reading and the analysis, I have wanted to compare the data from yesterday's stage with an amateur of a certain level or a cyclist who competes sporadically on the amateur calendar.

Evidently the answer to the question would be a resounding NO if we talk about stages in which cyclists come out willing to compete from start to finish. All this regardless of whether it is flat, broken or very high mountain terrain. I assure you that no matter how flat the terrain is, if the peloton starts to pace, you will be amazed at the pace it can take.

Something similar would happen in the descents. In a Tour de France you go down at full speed and 90% of fans would be left with only the line of the curves.

Logically, it is not necessary to speak of a possible mountain stage. At the first pass of the day, a mid-level fan would almost certainly remain even in the group of sprinters.

Once the situation is contextualized and with the confidence of having calmed those who during confinement saw themselves as future professionals competing in the Zwift, we are going to analyze yesterday's session.

A totally atypical day in which more than one cyclist would have finished the stage within the time control.

I say the control, because in the last kilometers it was blown up and very few fans would have held the final rhythm. In addition, technical ability has a brutal impact on this section of the race and you have to have a brutal confidence in yourself and in the equipment to “jump” like that in the roundabouts. If we use Strava to see the power of the cyclists in the last 20 kilometers we will notice the significant increase in intensity (this is also reflected by the pulse)

But analyzing the values ​​of 90% of the stage we can affirm that more than one cyclist had managed to finish the day.

"More than one cyclist would have managed to finish the day"

The average power data that we can find in some profiles of professional cyclists on Strava confirm that yesterday's stage was merely transitional.

The entire platoon rolled during the 185 kilometers at an average power of less than 200 watts. (the normalized power "NP" was much higher)

200 watts is an intensity that with a good training a fan could manage to endure without much trouble during the 4 and a half hours that the stage lasted.

In the attached screenshots you can see how Diego Rosa (Quintana's teammate in Arkea-Samsic) they were worth 168 average watts to finish the stage in less than 5 minutes.

For a guy like Andre Greipel, 190 watts of power were enough. Greipel's profile at 78 kilos may be more suited to the weight of a non-professional amateur.

Other cyclists like Simone Consonni or Ryan Gibbons also had average powers below 200 watts.

The pulse is another unmistakable fact that yesterday's day was really quiet. Greipel (Israel Cycling Academy) himself produced some mean pulsations of 106, while Harol Tejada (Astana) or Connor Swift (Arkea) barely exceeded 110. Oliver Naesen (AG2R) was left with an amazing 102 keystrokes on average.

The pulse reflects without a doubt the tranquility of the stage, but also the progressive fatigue of some riders who have already accumulated 5 days of competition.

In any case and no matter how much comparison there is, let's not forget that the Tour cyclists are the best in the world and that if they are on the World Tour it is for some reason. On television, everything seems much easier than it really is.

Did they go slowly yesterday? Yes. Way below your means? Also, but let no one forget that the average speed of the stage was 42 kilometers per hour.