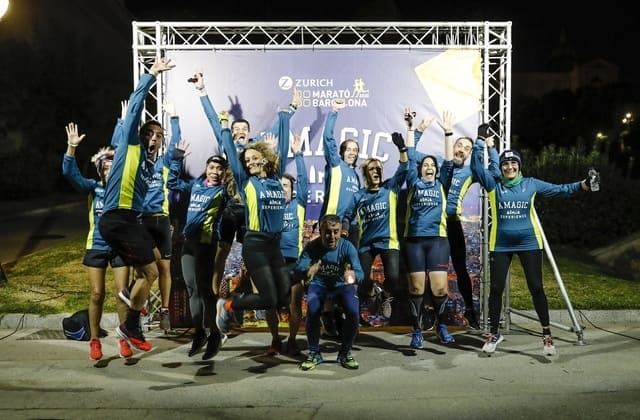 The Crowne Plaza Hotel hosted yesterday the official presentation of the Zurich Marathon Barcelona 2020 with the presence of 200 people, between public and authorities. With the claim ‘A Magic Experience‘The 42nd edition of the Barcelona event (a mythical number being a marathon) was presented, which will take place next March 15, 2020. This Magic Experience aims to offer all athletes a unique experience running through the streets of Barcelona.

David Escudé, Sports Councilor of the Barcelona City Council, started the parliaments and said he felt especially satisfied “with the increase in female participation" For his part, Cristian Llorens, director of the Zurich Marathon Barcelona, ​​highlighted the effort made by the organization at the level of services to the runner so that all athletes live the best possible experience. He also made a special mention of the high foreign participation, which represented 50% of those registered in the last edition.

Finally, Juan Porcar, CEO of RPM-MKTG, recalled that “42 years ago that RPM and Barcelona City Council work together”And also relived the moment that the Barcelona company assumed the organization of the Marathon after it had not been held in 2005. Likewise, the official shirt of the event was unveiled, in which the printed circuit stands out, with the help of a wizard who made her appear.

The setting of the long launch was later moved to the Magic Fountain of Montjuïc to start the first official training of the Zurich Marathon Barcelona. And, simultaneously, the logo of the Zurich Marathon Barcelona could be projected on the dome of the National Museum of Art of Catalonia (MNAC). A moment to remember. The 300 training participants had the privilege of passing through the MNAC and, with colored bracelets and balloons that lit up, made the mountain of Montjuïc even more magical as they ran. It was the icing on the cake for a 100% athletic and Barcelona day.

On March 15, 2020 Barcelona can live a historic marathon. And is that the pace of registration is significantly higher than the last edition, with a
27% increase over these heights just one year ago. In addition, it is also far superior to the 2016 marathon, only once the 20,000 race numbers were exceeded. At this point almost 1,000 athletes have registered more than the year of the record.

A circuit designed to ‘fly’ over Barcelona

The organization's commitment to a faster circuit has been one of the main factors that explains this good pace in the inscriptions of the race. A route designed to fly, the result of the improvements made in some of the most conflictive sections, excited the participants of the last edition for its speed.

The new layout reduces the percentage of positive slope by 20% and softens the most complicated turns, without losing the beauty of a monumental circuit that borders buildings as emblematic as Casa Batlló, La Pedrera, Sagrada Familia or Camp Nou. The Alemu Bekele brand (2h06’04 ”) in 2019, lowering the race record by more than a minute, and the Kuftu Tahir record with 2h24’44”, among the females, make clear the speed of this circuit.

One more year the Sports Expo will unite brands and athletes in Barcelona. The Sports Expo 2020, coinciding with the week of the sport and the Zurich Marathon Barcelona, ​​will be held on March 13 and 14 with reference marks from the running, triathlon, trailrunning, sports nutrition and health sector.

In 2019, more than 100 brands came together and during the two days of the fair more than 45,000 visitors attended to discover the novelties in the market, try products and attend talks about training, nutrition and sport. With this new experiential vision, the organization hopes to exceed the figures of exhibitors and visitors from previous editions.

For this edition, a new distribution of corridors and stands will be created, with the aim of favoring the circulation of visitors and giving greater visibility to brands.

This year, the Zurich Marathon in Barcelona has set a goal: 100 solidarity challenges and € 100,000 raised in favor of social organizations. To support a social cause it can be done through the solidarity crowdfunding platform migranodearena.org.

It is about adding a solidarity challenge to sports and supporting the social organization that the athlete wants. You can support the cause that most interests you: health and medical research, social exclusion, international cooperation, childhood, environment, etc. To obtain one of the 100 free solidarity numbers available, you must raise funds through a crowdfunding campaign in migranodearena in favor of the chosen organization. To get the solidarity number you must write an email to info@migranodearena.org.

More information and registration at: www.zurichmaratobarcelona.es