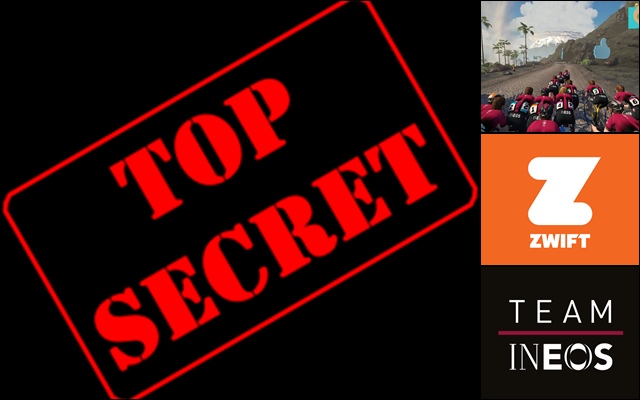 The virtual cycling race that the Ineos team organized this past weekend in full confinement will have served for more than offering a good dose of entertainment to fans.

Call me poorly thought, but I would be very surprised if the organization of the Ineos team had in mind the possibility that Zwift, a well-known platform on which the activity took place, will leave some data from the test monitored.

If the Brailsford structure has been historically characterized by anything, it is enormous secrecy that has surrounded the physical training and nutrition of its runners and it is that the data of Chris Froome, Egan Bernal or Bradley Wiggins have always been treated and saved as a matter of state.

Ineos, former Sky, has been a pioneer in many ways. The “marginal gains”, the inverted planning or the oval plates are a good example of the enormous technological and scientific potential that surrounds the British team.

Well, if for years all these issues have been carefully delivered to the media, now it seems that everything is shaken by a simple virtual race

A server quickly turned on the light bulb, so as a good geek and an expert in the field, I have taken advantage of crumbling the data that any user can still find available on the digital platform. I say the one yet because I would not miss anything that Ineos will quickly erase the information.

The fact is that if we take seriously the data provided by the final classification of the test, we can draw very interesting conclusions.

Before going into the subject itself, I would like to contextualize the situation. All these statements would always be conditional on the veracity of the data. We must think that the cyclists correctly entered the weight in their profile and that the power meters are correctly calibrated.

Personally, I would be very surprised if this were not the case since his real interest is to win the best races in the world and not to compete against four cheats in Zwift.

Without the actual data in the profile and without the correct calibration of the roller it is impossible for runners to carry out a specific preparation of Workouts during quarantine. Something that would be extremely strange in a team as professional as Ineos.

Therefore, taking into account the aforementioned circumstances we can calculate such interesting data as the weight of Chris Froome, Egan Bernal or Geraint Thomas.

In fact, looking at the final ranking we can calculate the weight of all the riders of the Ineos team.

To do this, simply divide the average power of the activity by the weight-power ratio, given in watts per kilogram of body weight.

Thus, in the case of Chris Froome, we divide the 355 watts of activity by the average ratio of 5.07 W / kg. It doesn't take a professor of mathematics to find a total weight of 70.02 kilos.

Effectively. If the information is real and the calculator does not fail, We can affirm that Chris Froome has a weight of 70 kilos for its 1.86 meters high. A pretty good weight considering the confinement and the serious injury that had him in the dry dock for a good part of last year. Of course, about 3 or 4 kilos above still its best version.

It is still curious that what has been “secret” information for years is now shared in such a natural way.

Applying the same formula as above we can know that Egan Bernal weighs 58 kilos. A not inconsiderable figure at the mercy of its 1.75 in height.

Geraint Thomas would be around 68 kilos, for its 1.83 height, while Ian Stannard would be the heaviest runner on the team with about 85 kilos of weight for his 1.90 tall.

Weight that to some will seem an exaggeration but that does not seem crazy to me after being able to see the former British route champion in first person.

In the attached photo, you have all the data available from the race so to calculate the weight of more Ineos runners, you have to use the formula above.

Rohan Dennis was finally the winner of the competition. Something that did not surprise me at all knowing the great qualities of the Australian time trial.

The recent signing of Ineos perfectly managed the energies and imposed a constant rhythm to finally surpass Eddie Dunbar and Michal Kwiatkowski in practically 1 minute. Be very careful with Dennis in view of the great returns of the coming years (here I leave it in writing)

The triathlete and always curious Cameron Wurf finished in fourth position. Something not strange knowing that the Australian based in Andorra sticks real beatings on the roller when preparing the Ironman of Hawaii.

Chris Froome finished in a creditable sixth position, while Geraint Thomas, winner of the Tour de France in 2018, could only be nineteenth and Egan Bernal, winner in 2019, “burst” in the final part to finish in position 22 to more than 10 minutes from Dennis.

It is certainly only a virtual race, but it seems clear that the Ineos riders have decided, together with the team's preparers, to apply the brake during confinement.

Today the cycling season is still in question, so the most sensible thing is to do maintenance work that minimizes the loss of physical condition. Egan Bernal already commented that he opted for absolute rest and that he stopped his training for a few days. Probably the main explanation for his poor performance in the competition.

The less than 5 watts per kilogram of weight that most cyclists gave clearly show that none of them are currently on the best physical level. Although we should always consider the possibility that they were not used in depth.

5 watts per kilo of body weight during 60 minutes of effort is a high value, which most of us would already like to reach, but somewhat improvable by these titanic athletes in their "prime time".

If you liked the publication and would like to see more analysis of this type, let us know through the comments!

Then I leave the complete race that you have available on the Zwift channel on Youtube.