Ronnie Coleman Program is a training split consisting of two phases alternating with each other throughout the training year, except for the 12 weeks of preparation for Olympia. It goes without saying that the Coleman program is not suitable for everyone, since not everyone has such a genetic potential, level of fitness, pharmacological support, a free schedule and many other factors that allow you to withstand such a high intensity and volume. That is why the program must be optimized for yourself, focusing on it as a certain scheme, the principles of which can be used if you are attracted by extreme weights, pain, progress and results. 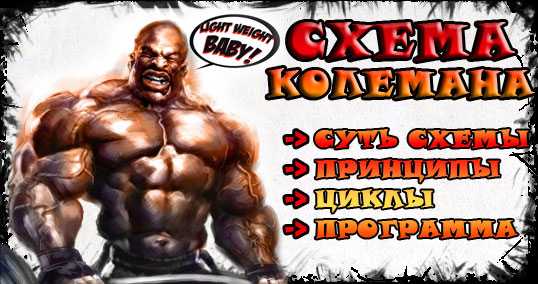 But before moving on to the principles of Ronnie Coleman’s program, as well as to the scheme itself, a few words should be said about this great athlete, owners of 8 Sandow statuettes and a mass in the offseason of 149kg. Ronnie Coleman, despite the dizzying success he achieved, remained a loyal and good friend to his friends in his youth, still studies at Metroflex with the same coach and the guys who surrounded him at the very beginning of his career. Coleman bought his mother a posh mansion, regretting that he could not do more for her. Already a professional athlete, he continued to work in the police force, because it allowed him to be of benefit to society. All this causes respect for him not only as an athlete, but also as a person with a capital letter, and since you have decided to use his training program, be so kind, try to be like him not only externally, but also internally.

Cycling: it is the most important element of the Ronnie Coleman system, which distinguishes it from other systems. It is clear that many systems use cycles, but Ronnie’s methodology is unique. Coleman prefers to use short cycles of 3-9 weeks, alternating them according to their well-being. The first is a strength cycle, which consists of 1-2 basic exercises, which are performed in the range of 4-6 repetitions in 6 approaches, with a rest between them for 3-5 minutes. The second cycle is a mass-gaining cycle, which involves 12-15 approaches per workout, 12-15 repetitions each, with a rest between them for 1-2 minutes. Coleman trains 6 days a week, but the first 3 workouts are developmental, and the second 3 are restorative, when 50-75% of the weights are used in the developmental workout.

Pyramid: an important principle of Ronnie’s program, especially in the strength phase, when the athlete works at a high percentage of the personal maximum. The pyramid principle implies a gradual increase in working weight from approach to approach, due to which it is possible to prepare muscles, ligaments and joints for maximum tension, as a result of which the likelihood of injury is reduced. Of course, Ronnie himself received many injuries during his career, as you may know, he underwent knee surgery, but still he is less injured than the same Dorian Yates, although they are both fans of heavy iron. What’s the matter? And the point is in the following principle of the Coleman program! 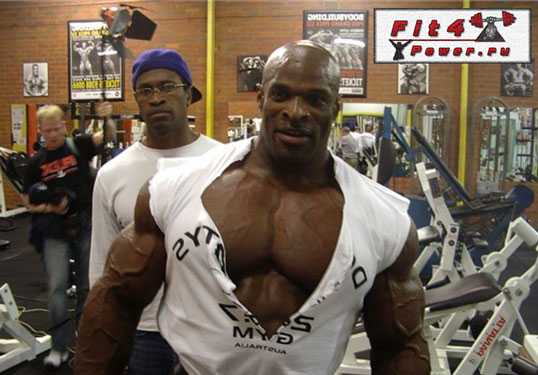 No refusal: surprisingly, Ronnie Coleman very rarely went to “failure”, preferring to work more voluminously. It is clear that Coleman worked hard and with such weights that brought him to the edge, but still he did not step over the edge. Most likely, you know this feeling when you do the last repetition literally with the last bit of strength, and if you lower the barbell again, then the training partner will raise it, this is the state to which Ronnie brought himself. Does it work? Definitely it works! For example, Dmitry Golovinsky trains according to volumetric circuits and bench presses 302.5 kg in competitions. On the other hand, the famous athlete, trainer and blogger Alexander Pasko preaches high-intensity training “to failure”. Does HIT work? Works, definitely, as exemplified by Dorian Yates. In other words, the Coleman scheme is just an alternative tool that can and should be used, alternating with HIT and classic volume training.

Phase I of Coleman’s program

Notes * the duration of the phase is from 3 to 9 weeks; rest between sets for 3-5 minutes; you can train 6 times a week or 3 times a week according to your well-being and capabilities; if you train 6 times a week, then the second three workouts should be carried out with a weight of 50-75% of the working weight in the first three workouts; be sure to spend warm-up and a hitch; cardio workout are carried out separately on days of rest or “light” workouts. Be sure to use the “pyramid” principle!

Phase II of the Coleman program