We go with the analysis and characteristics of adidas Ultraboost 19. As we advanced a few months ago, and we confirm now, adidas Ultraboost, after four successful versions, reinvents itself.

This daily cushioned and extremely comfortable training shoe has been redesigned without losing its original appearance. This in itself is a merit, since it has gone from being formed by seventeen pieces to leaving it in four fundamentals (and in total eight ... counting up the laces!). He also does it in a new weight: 310gr in men and 268gr in women.

More than five years ago, this line of shoes was illuminated in New York. Undoubtedly, the Boost material is the main character. For those who do not yet know what Boost is, I recommend you read our article 5th Anniversary of Boost, the material that revolutionized the midsole where one can give an idea of ​​the impact of this technology. 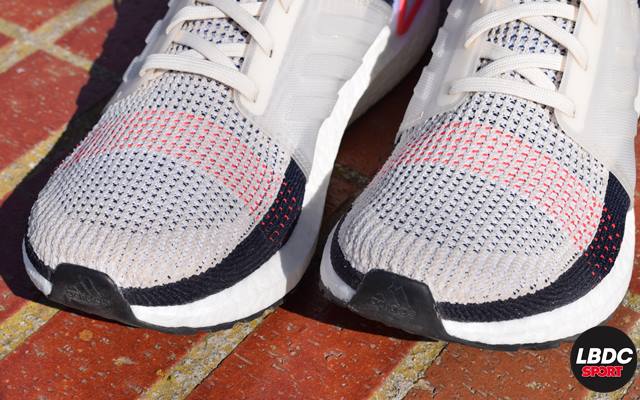 As I said, adidas Ultraboost 19 belongs to the group of daily training shoes, and is focused on those who have a neutral footprint. Now, its agile profile and its appearance between elegant and wearable in previous finishes they have become a benchmark in sneaker for everything, given its versatility and adaptability, even out of the race on foot, as I have said before, even to go out with them combined with jeans, after training.

What would quickly define what is mainly new in this Ultraboost 19 compared to previous editions:

Well, seen roughly, let's go to the bottom of the matter, 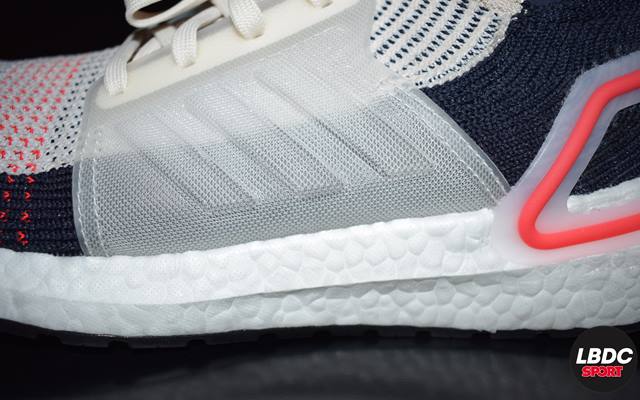 The adidas Ultraboost 19 midsole is built primarily with the Boost compound. Very recognizable given its granular appearance, Boost is a TPU pre-expanded, lightweight, very elastic and that is pressed giving it the shape of a midsole. Initially, 2,500 "pellets" of this compound were used before compacting it. Now this is no longer a valid measure since Boost evolves and varies depending on the model in which it is inserted.

Energy Boost opened the can of this revolutionary midsole that has forced all brands, all, to put their batteries. Tremendous was the blow that hit the adidas table with an Energy Boost shoe that, in turn, has given the alternative to Solar Boost and the entire Solar family that has come. 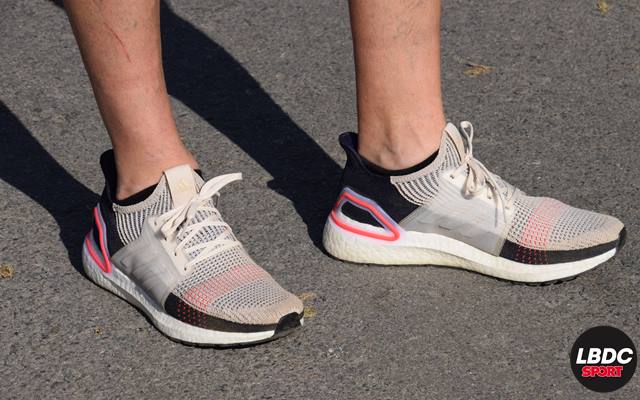 Ultraboost 19 wins in cushioning, lightness, rebound and durability, since the Boost is better prepared and distributed differently by concentrating that 20% of this Ultraboost 19 in the middle of the midsole, just below the vertical of the runner. But as we said, the Boost is not exactly the same, that's why the shoe has not "grown" by 20% but rather this extra Boost is more compact and is injected in practically the same space, that's why you hardly notice it in volume.

The appearance of the midsole is simple, since it is free of stability elements or geometric shapes of any kind. The material, its distribution and a broad base is enough to achieve stability of this shoe that, remember, is focused on neutral footprint. 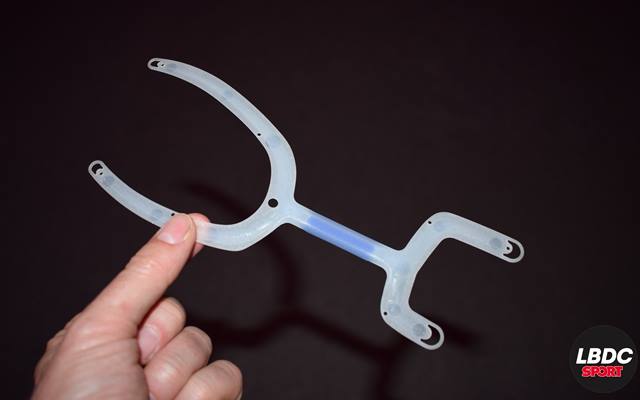 Inside, yes, there is one of the innovations of Ultraboost 19: Tuned Torsion System. Those who know the Torsion system will know that its function is to stabilize the foot at the moment after hitting the ground and when the foot rotates during the transition of the footprint. This new Tuned Torsion System simplifies previous constructions. It is visible from the sole. Well, only the part that remains under the plantar arch is visible. The tips, which reach the heel and, in front, almost to the toe of the shoe are no longer so visible and you have to be a little skillful to distinguish between the holes of the heels of the sole.

These tips will favor, from the midsole, throw the stride and return to the position of the shoe to transition the footprint.

The height of the midsole is 29mm in the heel area and 19mm in the forefoot. This gives a drop of 10mm. 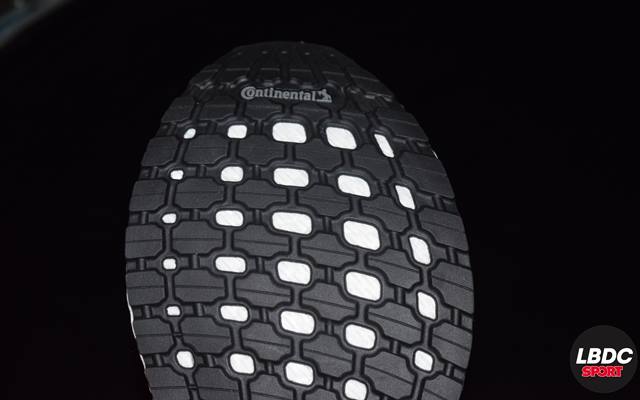 The sole is the part that perhaps less changes, apparently, adidas Ultraboost 19. But is that the level is very high: Used rubber is manufactured by Continetal ™ the German brand of tires. In addition the compound is Stretchweb, whose particularity, apart from a high adhesion and resistance to wear is that it is very flexible and adaptable. The latter results in better flexibility and increased comfort in the race. 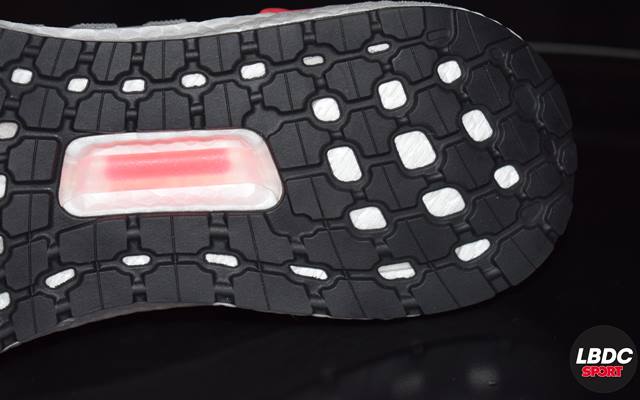 The studs are numerous and wide but not prominent (measured only 3.5mm thick). It is a sole for Hard surface (asphalt, cement, sidewalks), with which it is already intuited that urban environments are going to be their means.

The distribution of the taqueado is quite regular with transversal series of 6 blocks in parallel to each other. Like those who do not want the thing, 16 bending slots are counted along the entire sole. Slots that facilitate, also the best flexibility. In addition, and to complete the cake, all the studs have a fine groove, barely 1mm, which further facilitate bending. 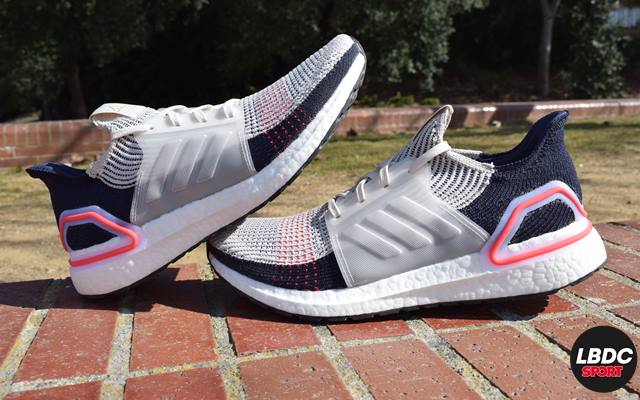 The upper of adidas Ultraboost 19 has greatly reduced its parts compared to the previous version, but has not lost its characteristic profile. Keeps ua one piece mesh wrapping the foot, with a tremendous reinforcement in the middle area, and a characteristic piece of rear reinforcement.

Little more ... But no! To start the mesh that surrounds the foot is Primeknit 360, this is a mesh type sock, without added seams. It is a type of very flexible fabric that will adapt to the contour of any foot, even those with complicated shapes for standard lasts. Through the forefoot cross threads (in particular: six) that act as reinforcement, just at the base of the fingers.

Just to take the mesh and stretch it is clear that no foot will suffer here inside. You can put your hand to the tip, and even close your fist, which fits you. And it's not because the last is wide, but because of what the mesh is adapted. The foot has a tightness when it is stable, but when running it swells a little. 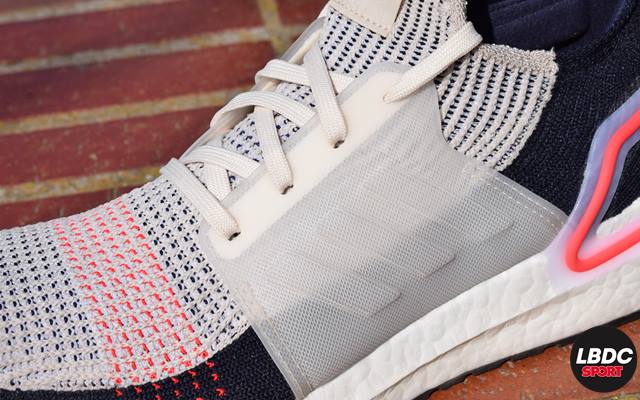 To improve the stability issue (which some Ultraboost users were missing that the previous ones had more), adidas has incorporated in Ultraboost 19 side straps of a material capable of recovering its original shape. These straps at the bottom are inserted in the midsole, and at the top they have holes, which are the eyelets. In the end, when who uses Ultraboost 19 closes the loop, is also closing these two straps (one on the outside, the other on the inside) on the foot holding it.

The girths may resemble the previous ones, but this is not the case: they are more flexible and lighter, but hold more. 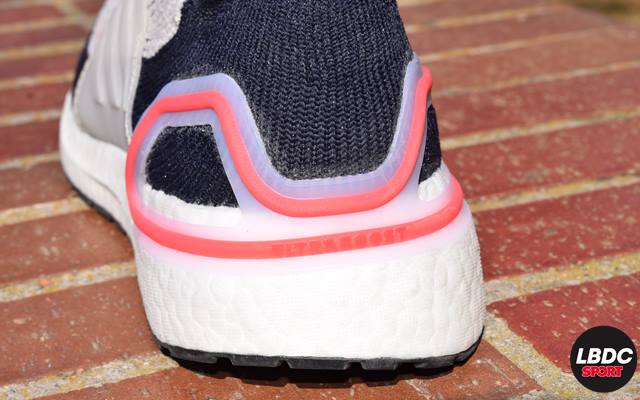 The front heel was a compact material, but now it is not so much because it has been removed material that is not used. That is why this aspect of bars reinforces a piece that stabilizes the ankle at the moment of impacting the ground, but leaving the Aquilles free so that it does not suffer. The outer piece, a bright color in the photos is rigid, but the semi-translucent base where it rests is already more flexible, since this part is the one closest to the foot. 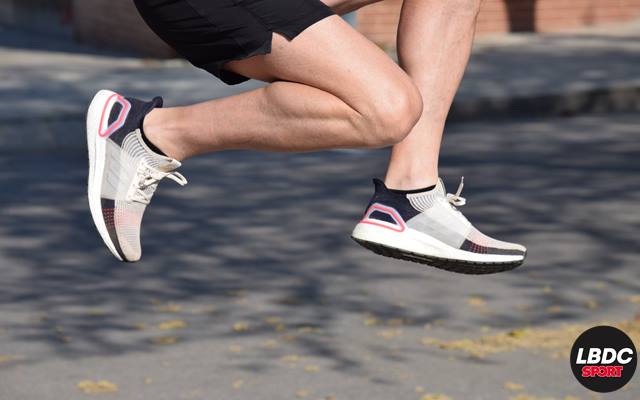 At the design level it has to be said that for tastes, colors, but I was particularly struck by the appearance of this Ultraboost 19. When I first saw it, it seemed too strange, I do not know if by the contrast of colors, the butt of the heel, with that electric tone or why. The fact is that if you take it away from all that, you realize that its appearance is more what it is now: a training shoe, polyvalent, yes, but clearly identifiable, which did not happen before.

Putting them on costs a little more than some of conventional laces and tab, but for its design in sock. Now, I must also say that it comes easier than others that I have put on. The high heel and the pseudolengüeta act as shooters and help you introduce the foot. Advice! Since the mesh gives in if you stretch it, the foot gets easier if you push it forward, moving the tongue, so that the heel passes more easily. 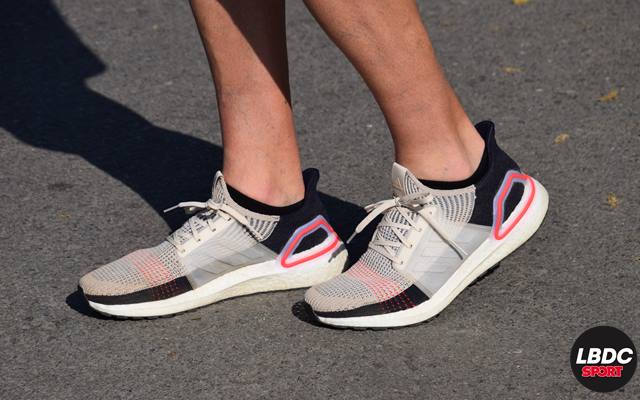 Once used, I can say that Ultraboost 19 is one of the most comfortable shoes I have ever worn.

Comfort is transmitted to the race. Notes how The midsole cushions you with extreme softness. The truth is that going on asphalt is a very good experience, because it is really comfortable. By land it is also good, the sole clings to everything, but it is better not to remove it from its ground. It drives very well, both on asphalt, as sidewalks, even on the park ground.

Adidas Ultraboost 19 is a daily training shoe, polyvalent but much more rolling than previous versions. The fact that it has more Boost and that the base of the shoe is now wider, makes the range of brokers and brokers that can use it increase. So runners of all kinds, even something of weight (not exaggerated) will be able to use it without problems.

To use it also with templates, if that is the case, it will be a very good shooting partner in training or racing, of all kinds of distances. It's certainly one of the most flexible shoes I've ever used (Natural Running apart).

At slow and somewhat happy rhythms, Perfect to go comfortable, cushioned and protected. If you accelerate, it also responds, but, like many daily training shoes, it is not meant for the fastest rhythms. For this it is already a matter of using mixed shoes, or even competition shoes.

And although this Ultraboost 19 has arrived with force, it has not retired its predecessor, as evidenced by the new adidas Ultraboost Game of Thrones collection that has just been launched on the heels of the new season of this successful HBO® series and where there are various finished depending on the "houses" that star the plot. They are not the only ones, the Ultraboost saga is extensive, as shown by models such as the classic Ultraboost, Ultraboost Parley, Ultraboost All Terrain, Ultraboost Laceless or Ultraboost Uncaged. 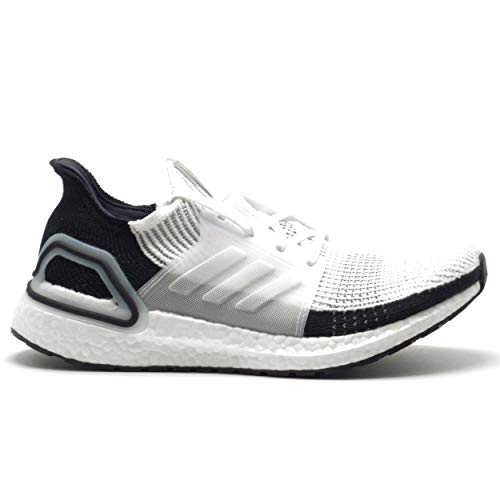