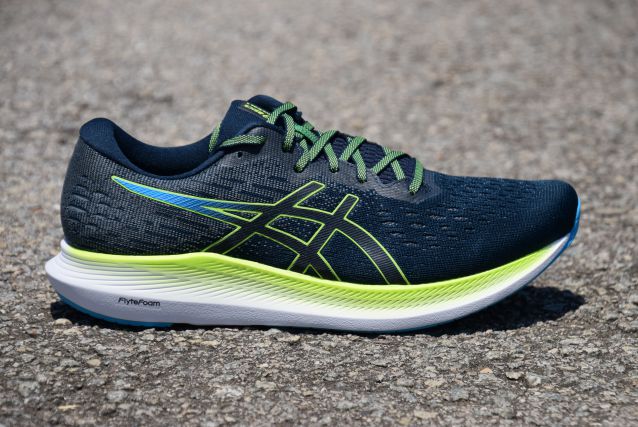 We already have the details and characteristics of ASICS Evoride 2, the second edition of a shoe focused on daily training, but capable of being light and helping to save energy. Guidesole is the star technology in Evoride 2. Its objective is to promote a good running gear, which also provides good comfort and, as a differentiating element, contributes to saving energy on the part of those who use them.

Inside “Energy Saving” (ASICS running shoes that use Guidesole), it shares space with two other models: Glideride and Metaride. The last one is the most complete of all (and also the most expensive, of course). But within what would be training shoes would also be the veteran ASICS Gel Nimbus or Gel Cumulus, among others, these focused on neutral footprint or insole. For overpronating tread there would be the totem that is Gel Kayano, also Metarun and GT-2000, among others, all of them already without Guidesole, yes. 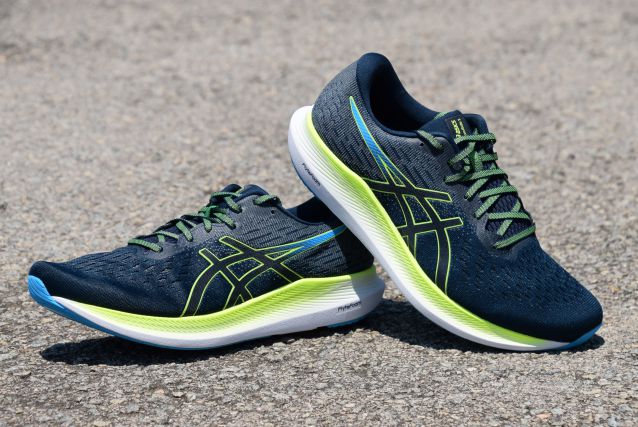 Before going for the analysis of ASICS Evoride 2 we see more from the beginning: the Japanese brand has polished all parts of the shoe. No striking changes, but we see that the sole incorporates much less solid rubber; the midsole, little, but it has been retouched (also with material modification); and the upper also comes with a slightly different finish.

In the end, this change in the material redounds to the weight, and helps (together with the reduction of the solid rubber in the sole) the total weight to drop from the 250gr of Evoride 1, to the 232gr of this Evoride 2. That in the case of men, because in women it goes down from 210gr to the Pyrrhic 192gr of now … In a training shoe! Very surprising. Let’s see it all. 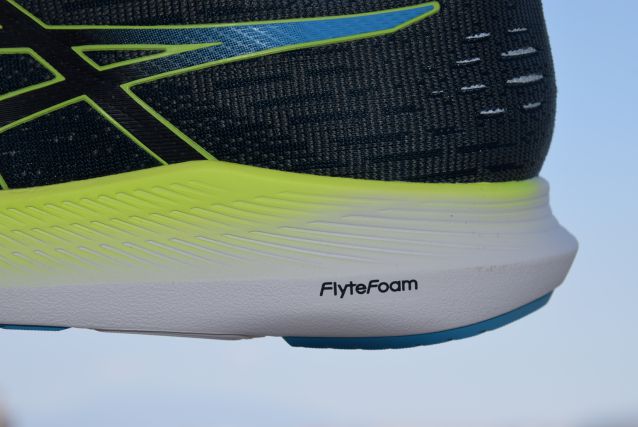 The ASICS Evoride 2 midsole is undoubtedly the most important part of this shoe (okay, in practically all of them they are, but in this one, it is practically their reason for being). Here it has not been enough to achieve a midsole that cushion, respond, be comfortable and last … Yes, it carries all that, but ASICS goes further with the “Ride” range because what it seeks is to also achieve energy savings that, due to the profile of the shoe that it is, helps to run longer …, longer…

The grace is in the design. In achieving an angle that allows to exit more easily in front, at the moment of finalizing the transition of the tread, and beginning the take-off … Only that? Well no, the other important help is that in the ASICS laboratory in Kobe Japan, they discovered that if they limited a part of the movement of the ankle (movement that is not necessary), it could produce savings precisely from that movement and, therefore Therefore, of the energy necessary to carry it out. 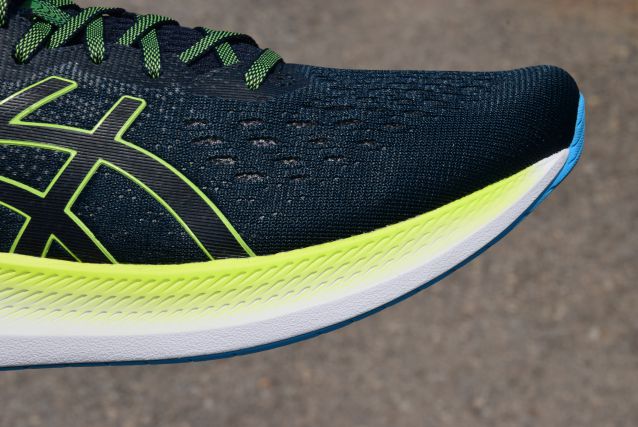 The material has to be consistent and could not be other than FlyteFoam, with which ASICS is “dressing” the majority of models Premium of its catalog thanks to the performance it is giving. But… Stop here! What happened? The polish I was referring to in the introduction was about the design, few tweaks but it’s more than meets the eye… Because ASICS has changed the FlyteFoam Propel material from Evoride 1 to FlyteFoam (just without the “Propel”). Okay, it is not a radical change, but it is important, as I am going to explain now. 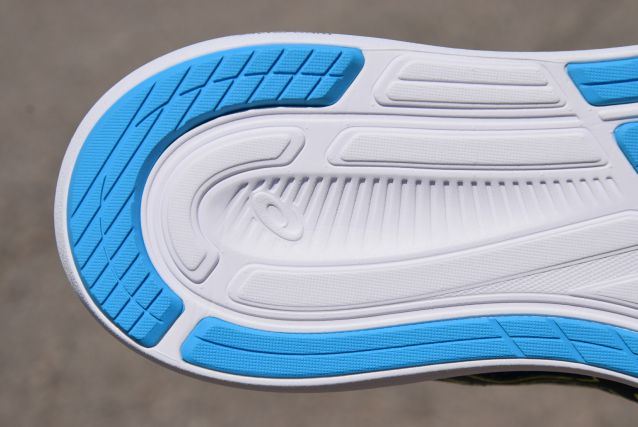 Also highly visible from the sole, FlyteFoam is a compound that offers great cushioning but is up to 55% lighter than other standard materials on the market. FlyteFoam is actually the combination of a specific type of thermoplastic polyester (PET) and Kevlar® polymer. ASICS uses these organic fibers nested in the foam to connect the material to each other throughout the midsole.

FlyteFoam Propel is actually an evolution of that material looking for a more soft and bouncy point. Well, ASICS now dispenses with that to recover the greater firmness of FlyteFoam against FlyteFoam Propel. But, in return, that same FlyteFoam ASICS has now manufactured it with a lower density that gives it greater softness and lightness. That is how it is understood, if not, it would seem like a step backwards …

The drop, that does not change and remains at 5mm. 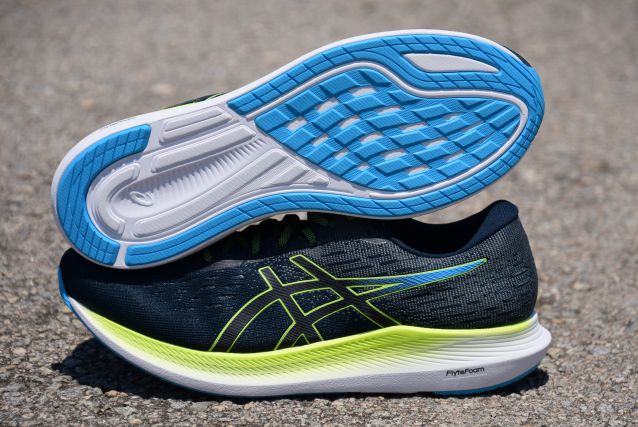 The sole is the part of the ASICS Evoride 2 where it is easiest to distinguish the changes compared to its predecessor. They all have to do with the design and distribution and not so much with the type of material (AHAR +)

This is how Evoride 1’s 5mm deep studs are seen to have gone down in history. Now they are mainly 2mm, leaving a greater thickness only and exclusively in the heel area, the one with the greatest wear on a shoe. 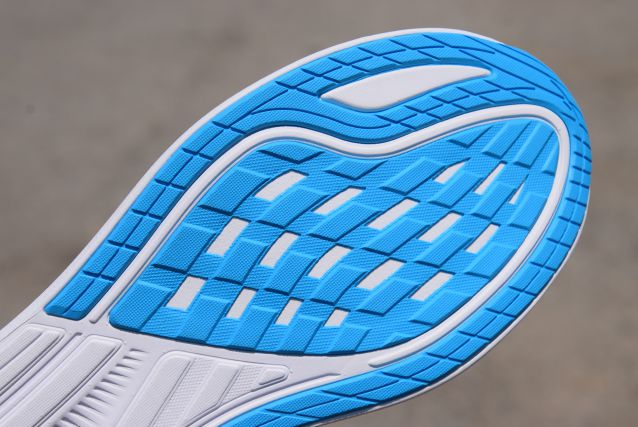 The rhomboid shape has given way to more classic shaped studs giving priority to the area under the metatarsals, the area with maximum impulse. It is appreciated how the area near the big toe is more relevant, one of the last to have contact with the ground just in the take-off phase. One aspect that improves rebound is flexibility, as the rubber is now thinner and therefore easier to flex during the transition of the tread.

To ensure that Evoride 2 resists wear and tear, ASICS has placed rubber around the entire perimeter of the sole (except under the plantar arch). 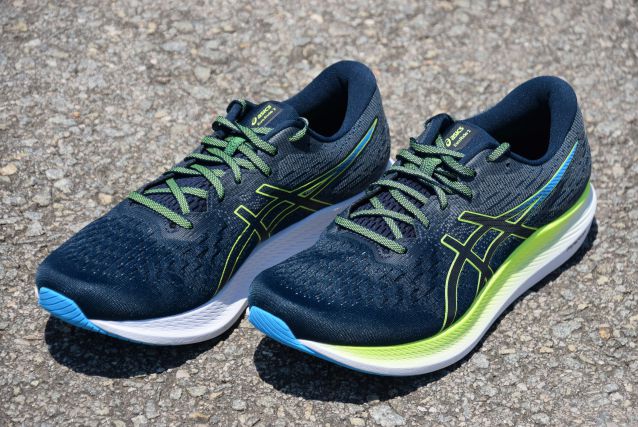 The upper of ASICS Evoride 2 has also changed, although as I said, these changes are not radical either. One of the remarkable aspects that is not appreciated either by sight or by touch is that the 20% of the upper cut is made from recycled material. We must be grateful, although it is true that a while ago this would be a pass, but today there are already many that incorporate recycled material and in a higher percentage. This is sure to be a first step and you will see even more recycled material in future Evorides. In any case, we will not complain either, 20% is 20%.

Another of the invaluable thanks to the eye is that the upper of this Evoride 2 uses a design that is thought to favor, however little, the air flow that we cut when running inside the shoe and thus it is ventilated. 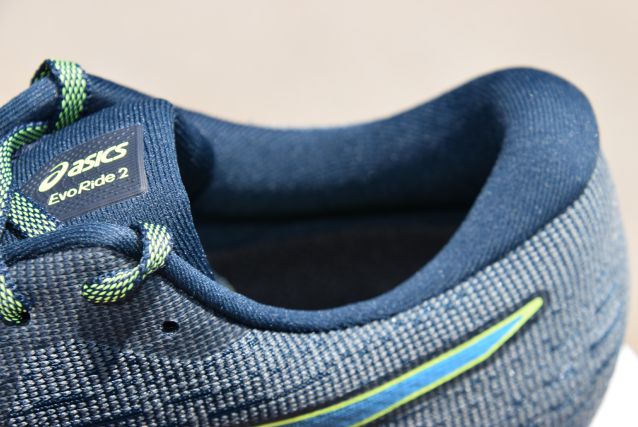 Speaking of the interior, inside there is a template that is no less than 5mm thick. It is a soft and padded material, which seeks to increase the level of comfort. When removing the template is when you take the opportunity to analyze the interior, touch it and look for points of friction. This Evoride 2 has an inner lining, underneath the mesh that makes the use very comfortable, it even allows to use it without socks if desired since everything is made without seams except the one that joins the front two thirds with the rear. 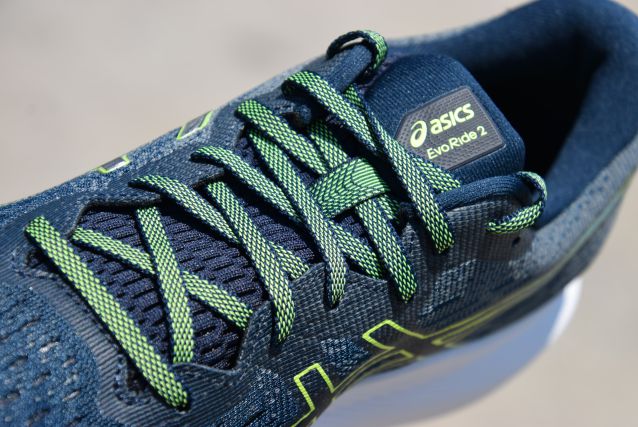 There is the inner cup, the one that houses the ankle. In addition to the soft lining, they have added ankle-hugging foam underneath for a soft support. Everything to achieve a high level of comfort. Although not misleading, the structure of the heel is rigid (as they are in daily training shoes), what happens is that it is not noticeable given the comfort of use. By the way, on the outside, here on the heel, we see, this time very clearly an improvement over the previous version: up to 11 points of reflective material on each side of the heel. Now if a vehicle gets behind whoever uses them in low light conditions, the shoes will reflect that light and make whoever is using them clearly visible. This is an important finish that Evoride 1 did not have and it is good that ASICS corrected it. 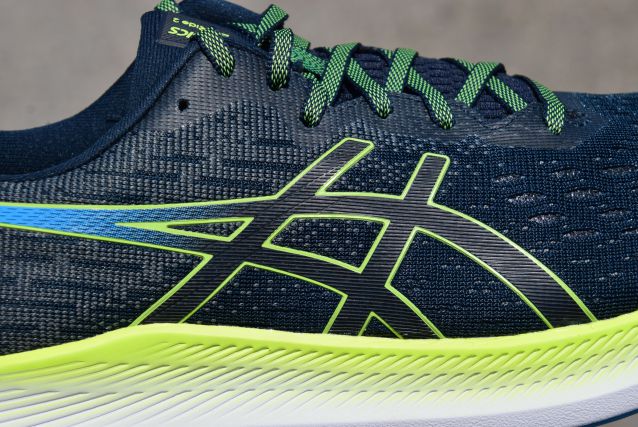 The laces are flat and single layer (before they were flat but hollow) and are passed through six eyelets leaving a seventh free at the ankle. Below the laces, the tongue, how could it be otherwise seeing the rest of the upper is very thick and padded for a comfortable fit. It is not attached to the body of the shoe, but at the level of the fourth eyelet it has a strip through which the laces pass: this way it will not move involuntarily.

The rest of the mesh is light and breathable (although the inner lining, in exchange for comfort, always subtracts a bit of ventilation). The main reinforcement in the support is the logo itself (Crossed Stripes, or also called “the tiger’s paw”), a TPU film just under the laces and that helps to reinforce the support when closing the loop. 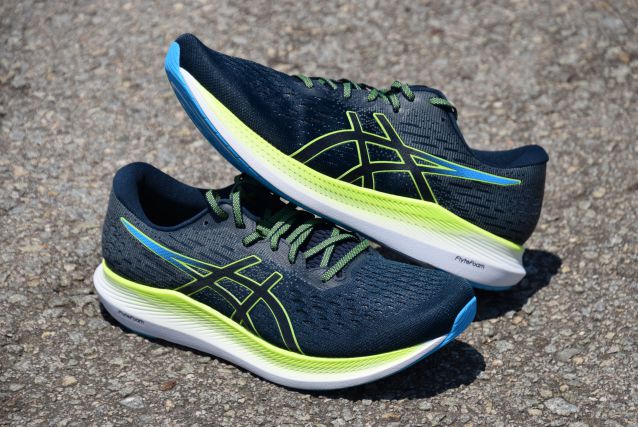 ASICS Evoride 2 is a daily training running shoe aimed at runners with a neutral tread. It belongs to the Energy Saving group of ASICS, where not only high performance is sought, but also that it is obtained by reducing the effort so that it can go further, either in time or in distance.

For a daily training shoe, its low weight is surprising since it is 232g in the men’s finish and 192g in the women’s. Much is due to the material of the midsole, which is very light, and the reduction of rubber (the heaviest material) in the sole.

In the midsole the most significant change is that FlyteFoam is now used instead of FlyteFoam Propel. Although to compensate for leaving that one, which was somewhat softer, FlyteFoam now has less density to gain precisely that: softness. The new distribution of the tread of the sole clearly defines a model designed for hard surfaces such as asphalt, sidewalks or concrete.

Above, the upper is clearly focused on providing comfort through the softness of the materials and their generous padding, but without neglecting support, especially that of the ankle, one of the pillars of Guidesole, the star technology in this shoe. And it is also based on the geometry of the midsole to help launch the stride forward, in each step.