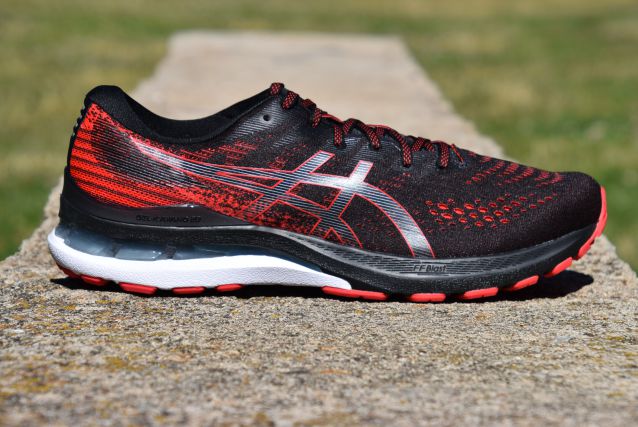 We analyze ASICS Gel Kayano 28, a daily or intensive training model focused on runners with an overpronating footprint. Kayano has a long journey, so much so that it seems that it can no longer surprise. But it does. Not because it reduces a few grams compared to the previous delivery, but because it incorporates new solutions and also new materials, such as FlyteFoam Blast in the midsole.

The weight reduction now makes it 308gr for the male finish and 258gr for the female finish, in line with the daily training shoe that it is. Another feature that the Japanese brand has wanted to enhance, for example, has been to provide it with a greater contact surface with the ground to help with stability, already from below. 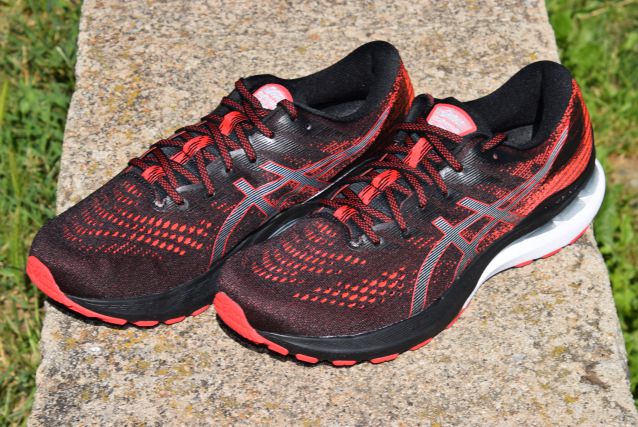 A much more visible change compared to Kayano 27 is found in the heel, with a kind of external clip that will undoubtedly help stabilize the ankle when it hits the ground, when running. Although not everything will be changes. We see it in characteristics such as the drop, which remains differentiated between the sexes to adapt to the morphological differences between men and women.

The Kayano saga does not rest. In its twenty-eighth installment, it shows that it is not only one of the best shoes with pronation control on the market, but that it does not sleep and continues to fight so that its pursuers find it very difficult to unseat it from the top positions in this long-suffering category. . We see all the details. 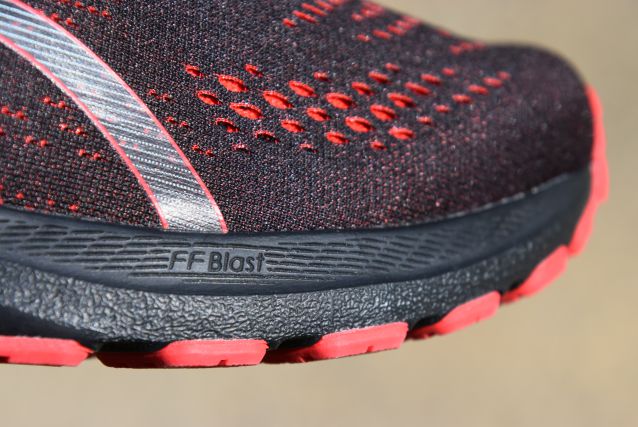 The ASICS Gel Kayano 28 midsole has several novelties, but the most outstanding of them is undoubtedly the first-time use of FlyteFoam Blast as the main material for cushioning.

Actually, there is more than one material, there are damping systems, stabilizing elements … The midsole of this Kayano is an entire engineering structure that begins with the first layer of cushioned material. On Kayano 27 it was FlyteFoam Propel, a softer variant. Now, with FlyteFoam Blast, the Japanese brand intends to give it a further contribution of reactivity, since it is a light material, but with a sensitive rebound effect that will come in handy for the take off of each stride. That in the top layer (in the photos, in black). 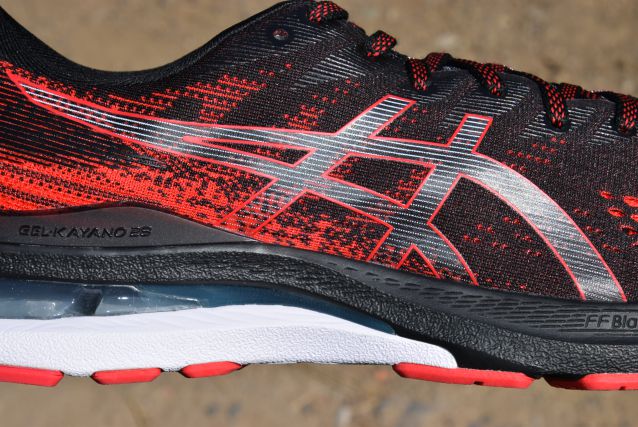 Underneath, in white, and not along the entire length of the sole of the foot, we find FlyteFoam to dry, the original. FlyteFoam is a compound formed by a type of thermoplastic polyester (PET) and Kevlar® Polymer. ASICS uses organic fibers nested in the foam to connect all the material together, achieving a very high durability. In addition, the weight of this material is 55% lighter than a standard foam. We see it occupying the bottom part of the midsole, just from the middle to the heel (white in the photos). 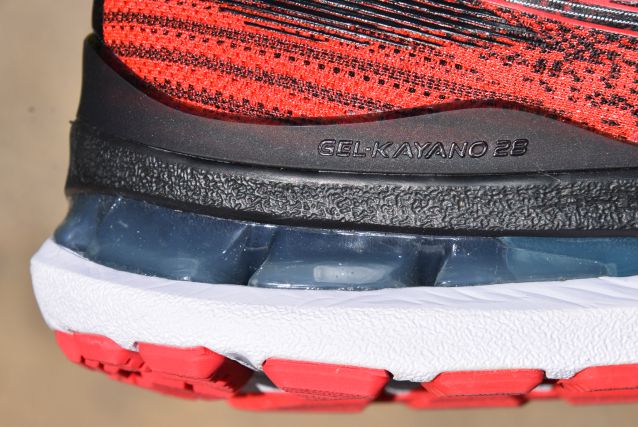 Looking at FlyteFoam (white) and FlyteFoam Blast (black), we see a translucent material between them, on the heel. It is known as GEL®, proprietary to ASICS and is its main cushioning system and brand hallmark. Provides cushioning and softness that is responsible for the comfortable touch of these midsoles. It is not placed in the external area of ​​the heel by chance, but because this is the part that impacts the ground in the first instance when running, hence that is your job here: reduce the impact speed so that when you already fall with the whole body, the consequence of that blow is less, and without reducing the race pace. 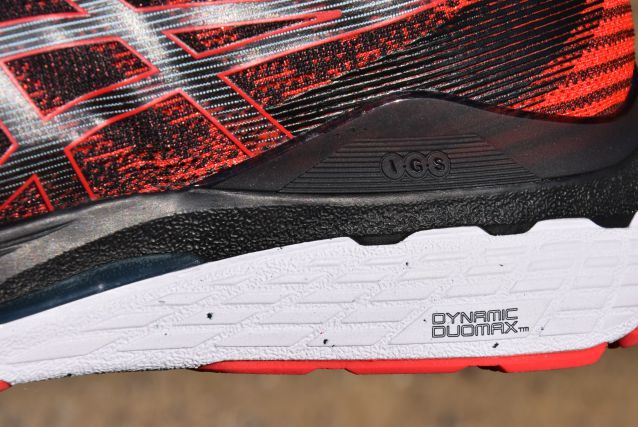 There are still stories in this worked ASICS Gel Kayano 28 midsole, such as Dynamic Duomax. It is a material with a higher density and which, also strategically placed on the inside of the heel, has a good part of the responsibility of stabilize the footfall of those who need it most: those who pronate excessively. Being more dense, when the runner tends to rotate the ankle too much, this material resists being deformed, keeping the ankle stable in place and that it does not rotate more than it touches.

And more: Space Trusstic (visible from the sole) whose function is to help balance and guide the foot while it rotates during the transition of the tread by transferring the load from the rear of the foot, to the front, just before the phase of exit before launching the next stride. He does this by working as a team with the Dynamic Duomax material. 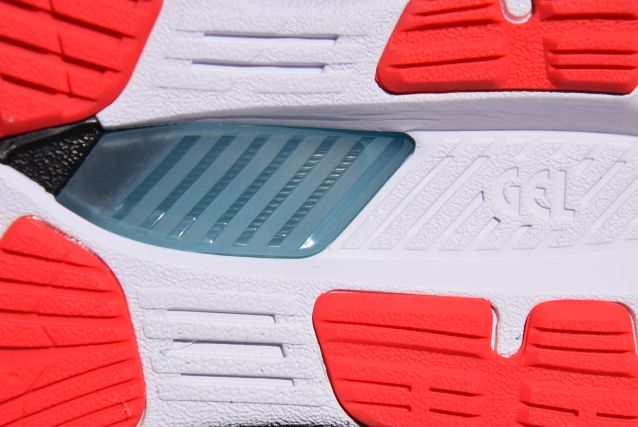 And there is still more. A new technology that has arrived at ASICS and seems to stay: 3D Space Construction, which consists of quite flexible geometric shapes that are inserted inside mainly in the heel area (although there may also be in the forefoot). They are responsible for helping in cushioning, making it more stable. They are distributed in different amounts and areas, according to sex since ASICS has the different type of support between men and women. They are very close to the base of the foot, just below the footbed (the place where the template is housed). By the way, that footbed is visible, precisely if we remove the insole, being that padded material, also from FlyteFoam.

The drop (the difference in height between the heel and the forefoot) deserves separate treatment, although it repeats in numbers with respect to Kayano 27. It is of 10mm for men (heel height: 23mm; forefoot height: 13mm), while in the women is 13mm (heel height: 25mm; forefoot height 12mm). This is what ASICS calls Gender Specific, all to spin just as fine for them as for them. 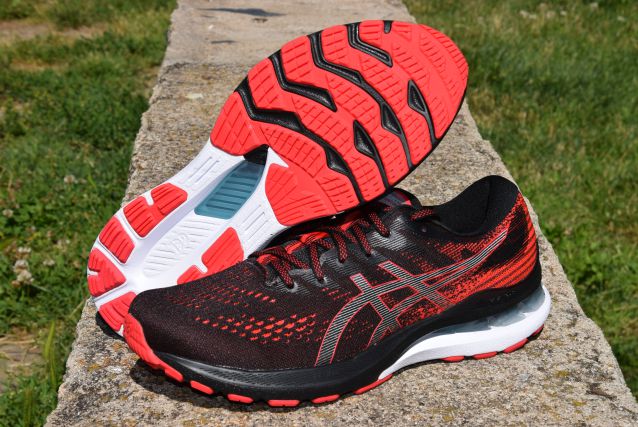 The main novelty of the ASICS Gel Kayano 28 sole is that the general design changes to seek the maximum support surface. This is linked to the issue of stability, since having a good base to support all the elements of the upper layer that cushion in a stable way, will provide a smoother ride and better use of all that control. 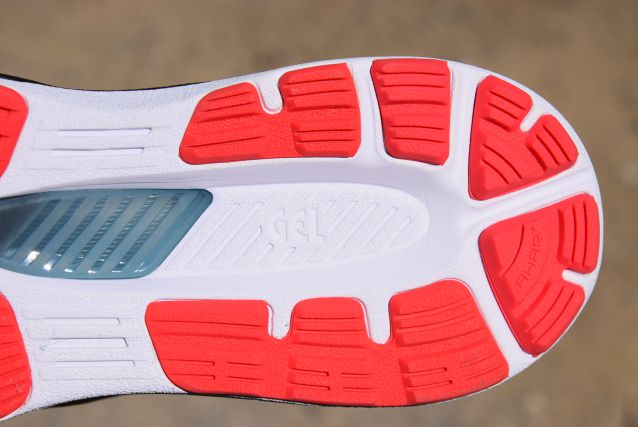 Within that design we do see a classic horseshoe shape on the heel to help enter any type of footprint. In that area there are five rubber islands that are subdivided into eight blocks of blocks in total. The reason for these divisions must be found in the fact that, by segmenting this part of the sole, the landing (the impact with the ground) does not occur in a single blow, but rather, as each segment touches the ground separately, helps transform that vertical force into horizontal. But more important than that, is that the impact is received progressively and not suddenly.

The middle zone does not have rubber, but it is where you can see the Space Trusstic piece that I mentioned in the midsole. 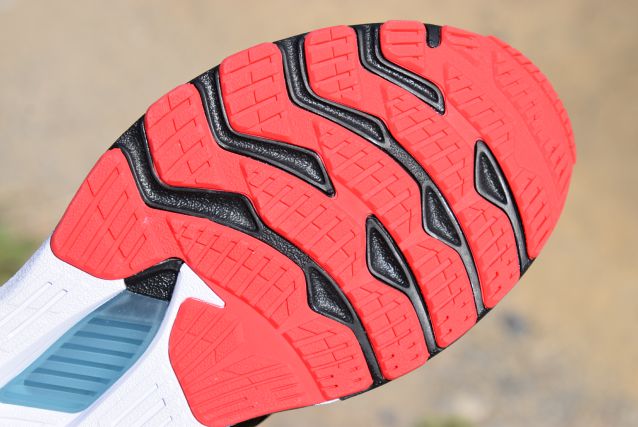 Ahead we see the entire metatarsal area and toe box with solid rubber, a very large and wide support surface, in which up to seven flex grooves stand out (several of them reach the midsole) and that will undoubtedly help that the foot flexes easily, while finishing the transition of the tread.

All this at the design level, but in the sole of ASICS Gel Kayano 28 two different materials are used, two types of rubber depending on the area since the work is not the same. On the heel, the three smaller stud islands, the ones that exactly coincide with the outer edge of the heel, use AHAR + (AHAR stands for ASICS High Abrasion Rubber). It is a type of solid rubber to which carbon is added to make it very resistant to friction and, therefore, to wear. On the other hand, for the two islands that would already be a little below the ankle and for the rest of the sole (forefoot and toe), the material is Light AHAR Sponge (the same rubber, but treated so that it has a lower density and, therefore, has a very high adhesion on hard surfaces, such as asphalt). 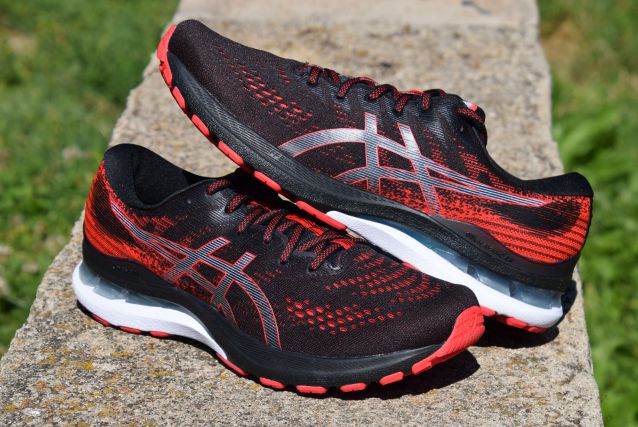 The upper cut of ASICS Gel Kayano 28 has as a star element the use of an engineered Jacquard mesh that provides great wearing comfort and makes it possible to dispense with rigid or overlapping elements to reinforce the hold. It is a type of mesh that also facilitates breathability in order to keep feet as cool as possible. 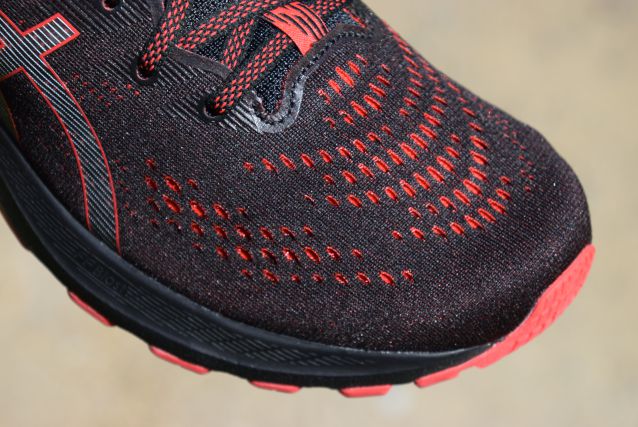 It is constructed in a single piece, that is, without seams, although in two layers, since the inner lining seeks to improve wearing comfort. This sometimes penalizes ventilation, but ASICS has put some very large holes in the mesh, right in the area of ​​the toes, where ventilation is needed most, and that also helps to guide the rest of the foot. 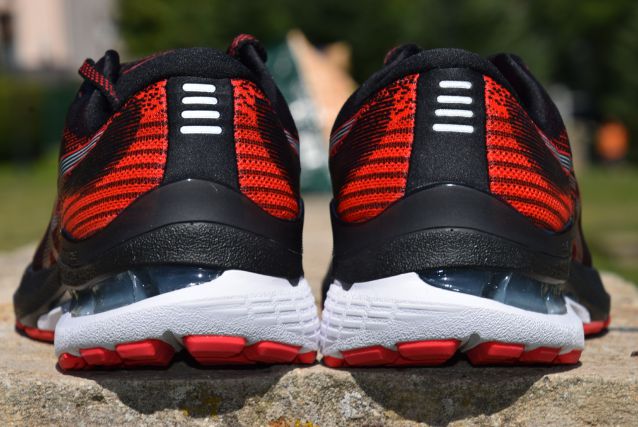 The great novelty of the upper, yes, we find it in the heel. ASICS has designed for this Gel Kayano 28 what they call External Heel Counter, which is nothing more than a buttress that is responsible for stabilizing the ankle when the foot hits the ground. This is a critical moment in all running shoes, but especially for those who run on the heel, a profile of a person very compatible with users of daily training shoes in general and Kayano in particular.

The rest of the heel also has some stiffness, but this time in the non-visible area, as is usual in training shoes. 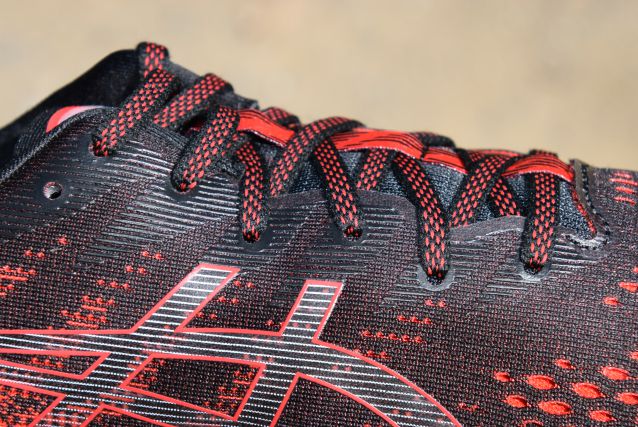 If we go up, to the laces, we see that they are passed through six eyelets leaving a seventh free near the ankle for those who want more tightening here. They are flat and are passed through up to three strips located on the tongue with the sole objective that it does not move from its place (if with one it would not move, with three I won’t even tell you). As expected, the tongue is very thick and padded, so that when the loop closes, it does not press too hard on the foot. 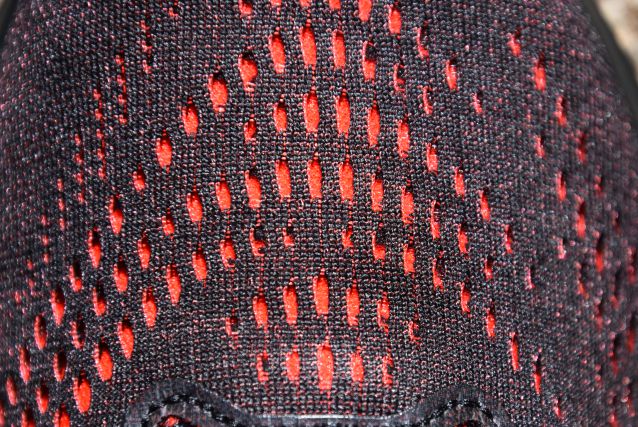 And how could it be otherwise seeing the general tone of the new Kayano, the template is very thick (5mm) and spongy. It is made of Ortholite X-55 and also rests on a 2mm footbed made of FlyteFoam material.

A last detail to highlight would be that, at the top of the heel, from behind, ASICS has arranged up to four strips of reflective material so that the shoe can be seen if we run at night on the street or on the road and a vehicle illuminates us from behind . Something very useful to clearly highlight our position and help in our security. 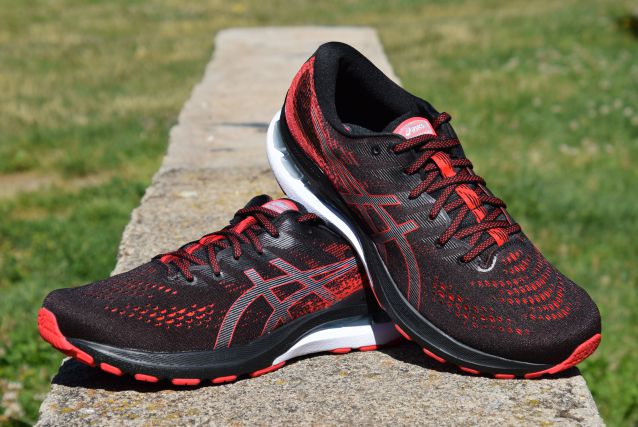 ASICS Gel Kayano 28 is a daily training shoe aimed at those who need pronation control. It is one of the “top” models on the market thanks to the damping + stabilization of the tread being carried out in a comfortable, smooth and efficient way, without sacrificing performance.

AHAR + rubber is used on the outsole for durability and Light AHAR Sponge for grip / traction. Both also stand out for being the best in ASICS. Above, the Jacquard mesh performs its main functions, such as a good fit and breathability, and also makes it light.

ASICS Gel Kayano 28 is a great ally for shoot-based workouts and perfect if you are preparing for a half marathon or marathon. Wearing it on race day should be if you want to go more comfortable than fast (to find speed, ASICS already has other mixed or even competition models). The normal thing would be to use it at rates from 4’25 ”- 4” 30 ”and calmer and choose another type of more nervous shoes if you want to go faster.