We have the analysis and characteristics of ASICS Gel Nimbus 22, the high-end daily training shoe of this Japanese brand. Nimbus has always been characterized by having a great capacity of damping, which has made it valid for training based on shootings and even some races, if comfort is prioritized over the requirement of lighter and less protected footwear.

Asics Nimbus 22 improves the midsole to achieve even softer footwear than its predecessor Gel Nimbus 21. So far nothing new on the Horizon, since all brands are revolutionized changing the compounds to counteract the competition, with Nike in the lead and his sensational Vienna spot, with Kipchoge bursting the chrono in the marathon distance ... 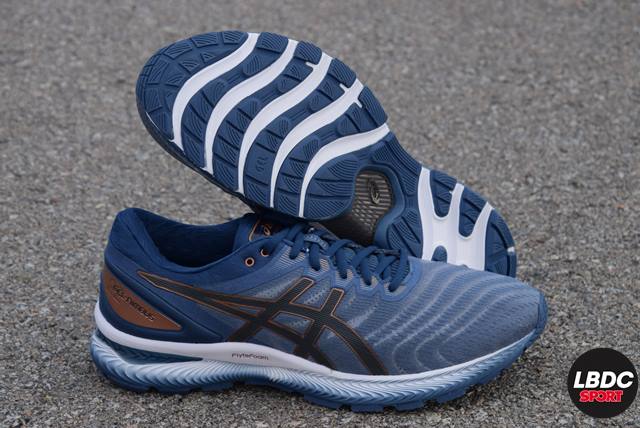 All brands are revolutionized making changes in the midsole, advancing 2020 models to now, late 2019, because of Nike, but it was that before it was adidas with its Boost to take on its best models ... And then New Balance has come with Fresh Foam or FuelCell to keep two lines focused on different runner profiles; or even Brooks, going around his entire catalog and exchanging nondescript shoes for much more dynamic and even “fun” models (considering how bland they had been, at least until just five years ago).

ASICS Gel-Nimbus 22 also doesn't break with its past. Have a different look but maintains the essence, both in the structure and in the materials used. We go in parts. 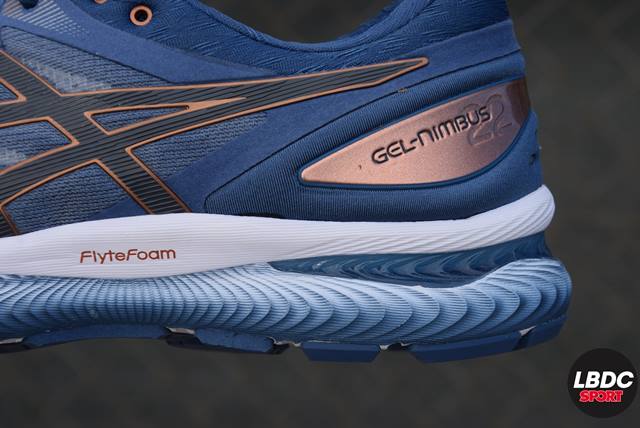 The ASICS Gel Nimbus 22 midsole maintains the structure based on two very similar compounds but with nuances between them: Flytefoam ™ and Flytefoam ™ Propel. The first one is cushioned and durable. The second also, but adding a better rebound against the pressure it receives when running. 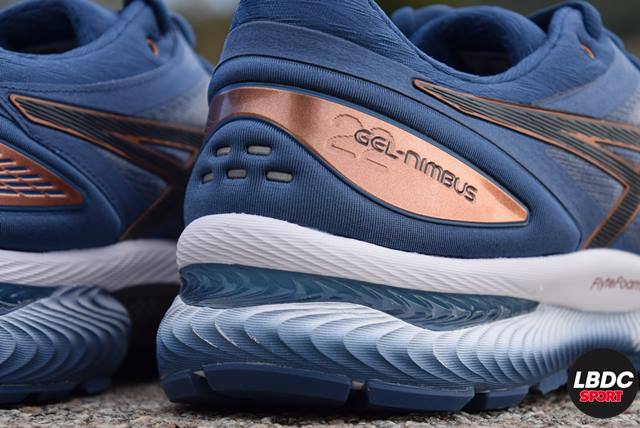 Let no one be scared by him GEL and its appreciated ability to absorb impact, because it is still present in Asics Nimbus 22. On the front there is a capsule that is responsible for reducing the effect produced by the impact, but combined with Flytefoam ™ Propel, allows for good reactivity. The GEL on the back is visible. And now more, since ASICS has distributed it in greater quantity and throughout the outer part of the heel, both the outer and the inner face.

Under the arch of the foot we find the piece Trusstic It is responsible for stabilizing the transition of the tread, allowing to reduce the material in that area somewhat. It is rigid to the touch, but it must be if it intends to protect the ankle while it rotates during the tread.

The drop of the shoe is different depending on whether it is for men or for women. So, in their case, the difference between the heel and the forefoot is of 10mmwhile in that of They are 13mm. This is due to concepts like Gender Specific, present in Gel Nimbus and Gel Kayano, and where specific characteristics of women are taken into account, in their finishes. 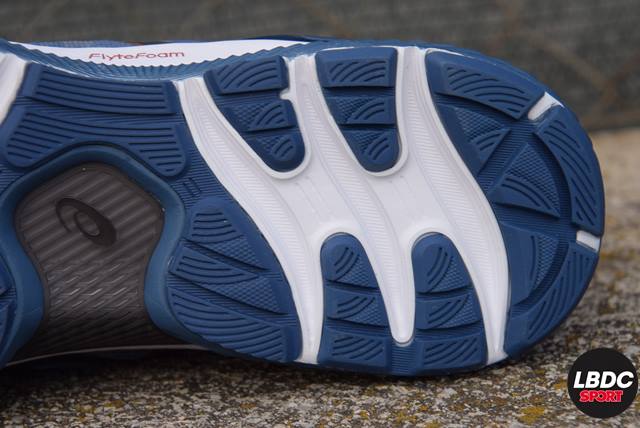 From the sole of ASICS Gel Nimbus 22 we have already seen the Trusstic piece that joins the back of the front, but another important element here is the material: AHAR ™. This is a rubber with high grip properties, but above all durability.

But although all the rubber of the sole has the same color and appears to be the same, it is not. In the heel is much harder and more resistant since this area is very bad and should have the best durability. On the other hand, in the middle zone, under the metatarsals it is softer, because here what matters is adhesion and traction, not as much as durability. 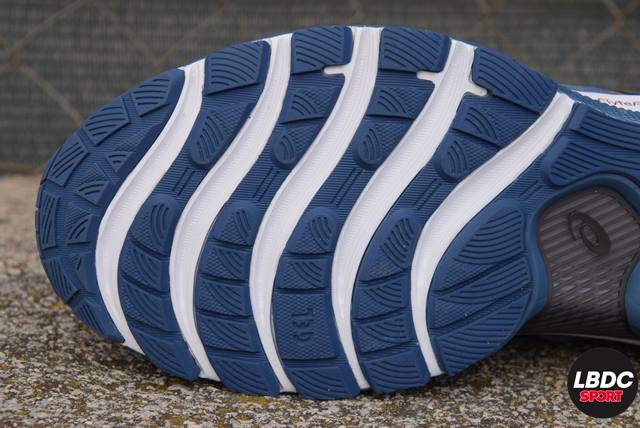 Guidance Line surprises with its low presence. It is hardly an outline that I think is only able to see someone who knows what they are looking for. That great longitudinal strip of the past, which guided the tread, has practically disappeared. It seems that ASICS gives more importance to flexibility (There are huge up to five large transverse grooves in the front area, and even three in the area under the ankle).

In any case, the technology that unites other technologies is still present (be it redundancy). I explain: ASICS calls I.G.S. (Impact Guide System) to collaborative work among most of the mentioned elements, both of the sole and midsole, to ensure that they work as a team in favor of the runner or broker. 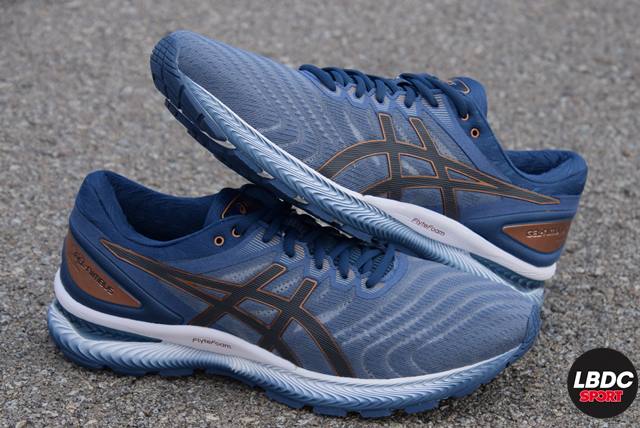 The upper of ASICS Gel Nimbus 22 comes with the vitola of using a monofilament thread to, according to ASICS, provide greater softness and breathability when attaching to the foot. In addition, the last one recovers one of the assets of previous models, such as the width of the front area for freedom of the fingers, something that had been retouched in ASICS Gel Nimbus 21 and that some runners and runners had not liked. ASICS, then, returns to the good known of this Nimbus saga. 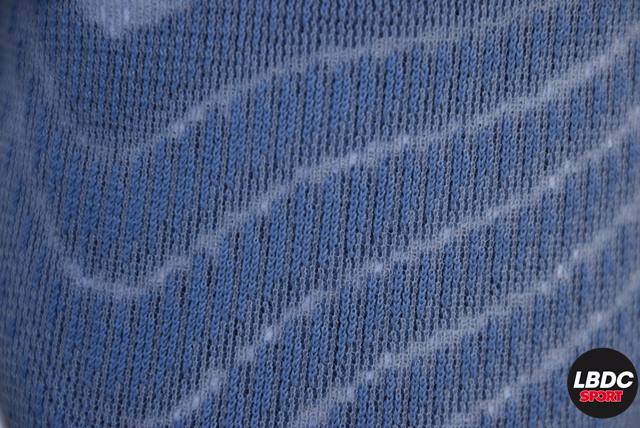 At the moment of truth is a mesh with double body with reinforcements in between. The double body is because inside there is a layer that is the one that is touching the foot, with generous holes, but soft to the touch. On the outside is the mesh itself, with an open texture that greatly facilitates breathability and with thicker sections of yarn in areas where more support is required. Since it is transparent in the analyzed model, it is easy to see this solution applied by the Japanese brand. 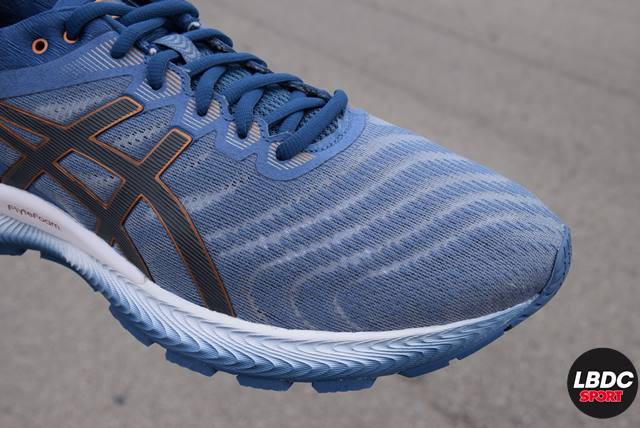 The cords are semi-rounded and are passed through both six eyelets (leaving a seventh free) and the tongue, so that it does not move. By the way, a very spongy and comfortable tongue that gives way to an interior that contains a template made of molded EVA to also give a plus of comfort.

The ASICS logo is not there, without more. It is a synthetic piece that holds both outside and inside the instep. This logo (one on each side in each shoe) is also connected to the area of ​​the laces so that, when closing the loop, the foot is securely fastened. 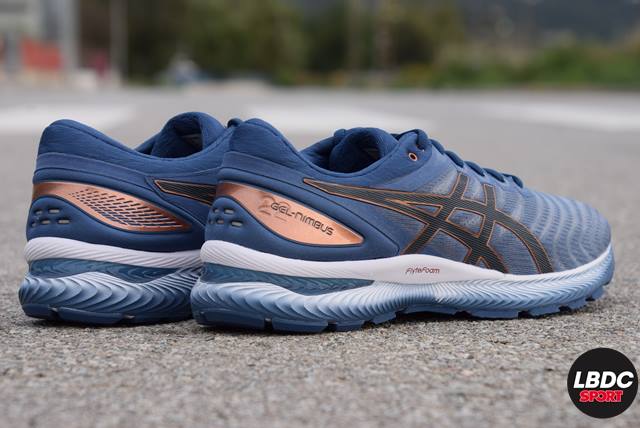 Behind you can see a buttress that is even more than you see, because inside there is another piece more rigid to contain the ankle at the time of impact on the ground. This rear part is topped with five small reflective elements, enough for those who use them, to be visible from behind in low light conditions.

ASICS Gel Nimbus 22 is a high-end daily training shoe that is valid for neutral or seedlings. It is a great option for runners and runners looking for cushioning and comfort above all. It has as direct competitors models such as New Balance Fresh Foam 1080, Nike Air Zoom Vomero, Brooks Glycerin or Adidas Ultraboost (19), among others.

This is thanks to a midsole that uses two large compounds such as Flytefoam ™ and Flytefoam ™ Propel. Both cushioned and one of them with a greater bounce point. Also thanks to the sole and the combination of solid rubber AHAR and another softer but that favors the adhesion. And finally, thanks to the upper, light and breathable, which holds the foot but leaving the front part with freedom for the fingers and for some increase in the volume of the foot that is sometimes given while running.

With this Nimbus 22 they will be able to perform all kinds of workouts, but especially those based on accumulating time or distance. The rhythms when using it, should be typical of the shootings, from 4’15-4’20 the fastest and from there to cover all the rhythms, Especially the quietest. To go faster, still, perhaps we would have to look at another type of footwear lighter or more prepared for it, as in the case of series or fractional training where mixed shoes have a greater reason for being.