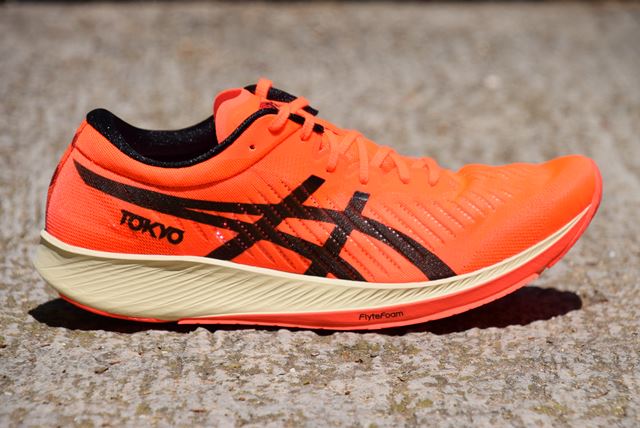 We analyze the characteristics of ASICS Metaracer, a competition shoe, or "flying" with all of the law. In fact, one of the defining characteristics is the insertion of a carbon fiber plate to improve its performance.

At a time when the most striking part of a running shoe is the midsole, because it is in the eye of the hurricane due to new materials and the proliferation of finishes of all kinds, this Metaracer appears to attract everyone's attention. 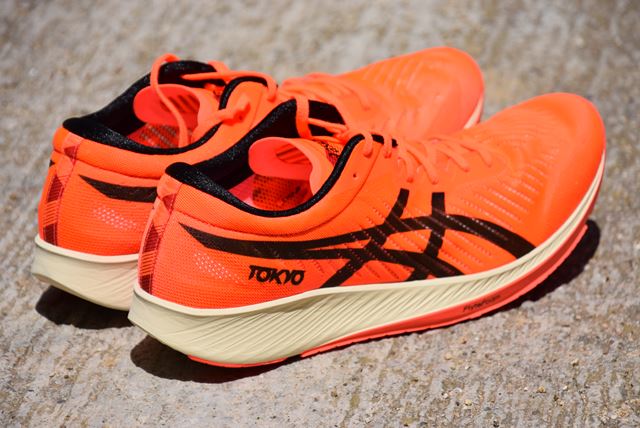 What Nike has done with the pre-AlphaFly prototype is well known to many: impressive achievement of getting off the two-hour marathon distance (less than three minutes per kilometer… for forty-two kilometers!) And jumping all alarms with an unusual concept: technological doping. This has meant that World Athletics has prohibited, or rather, limited (prohibiting everything that has already been done so far) aspects such as midsole thicknesses or the use of more than one carbon fiber plate ... if the records are to be be approved… AlphaFly has passed the haircut, but the shoe used by Kipchoge in the Viennese Prater, to run at 1h59'40 ”would be, right now, considered technological doping… little joke.

Well, ASICS Metaracer slides gracefully through all this hubbub, to present itself as a very solid alternative as a racing shoe. One of the most striking aspects is that, despite the volume that is appreciated, its weight is incredibly low: only 190g in the men's finish and 156g in the women's. 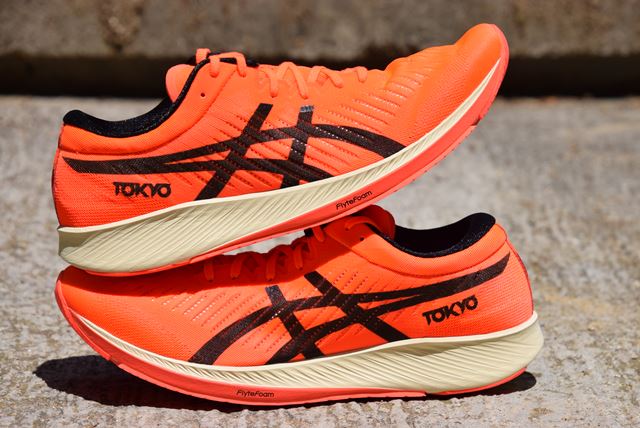 And the Japanese brand has not looked for the umpteenth essence, but to technologies already used by Kobe, even the newest, as we had the opportunity to know at the House of Technology that ASICS Metaride is, has given them a squeeze to filter this elegant shoe that has to give many joys to the feet of those who use them, according to what we have seen in them. Let's explain it.

Before, yes, it must be said that it has a halo of sorrow. And it is that it is the finish "TOKYO" is in honor of this city as the organizer of an Olympic Games this 2020 that will now go down in history as the first not contested on date since World War II, since they have been postponed to 2021. 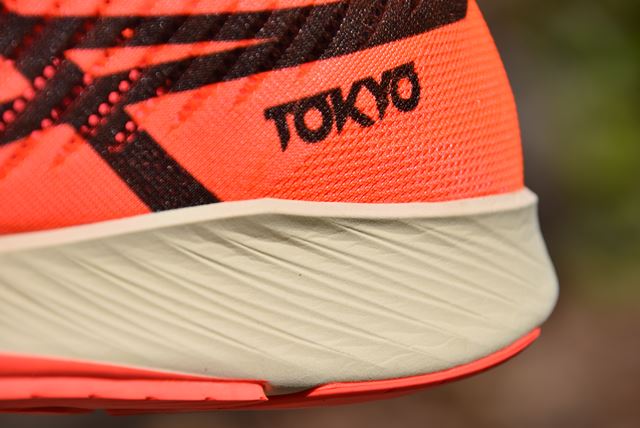 Without a doubt, the ASICS Metaracer midsole is the star of this new model. Earlier I mentioned its extraordinary low weight, but with a thickness of 24mm in the heel and 15mm in the forefoot, there is enough material that if the final weight were higher, nobody would say anything.

That thickness will help, along with other solutions, to make use less harmful than with a much lower profile. The drop, or difference in fall between the heel and forefoot, is therefore 9mm.

Guidesole, carbon fiber plate and FlyteFoam… What are we talking about? They are the three legs where much of the success in the design of this shoe is based. They must be explained separately to understand how they work together. 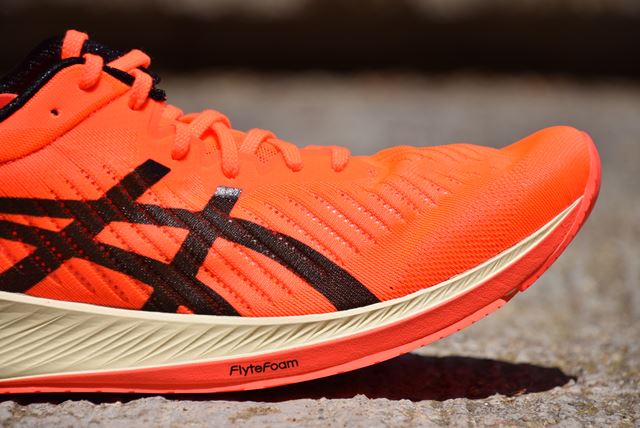 Guidesole is the technology that ASICS applies in some high-end models. It consists of a curved design, both of the midsole and, of course, of the sole. Both parts of the shoe work to limit unnecessary movements of the ankle (that does not flex too much), taking the foot to an area where it is easier to absorb impacts, reducing fatigue and improving efficiency.

The carbon fiber plate gives packing to the midsole, helping with its also curved shape, so that the use of the footprint goes to the benefit of facilitating the exit forward and saving energy. 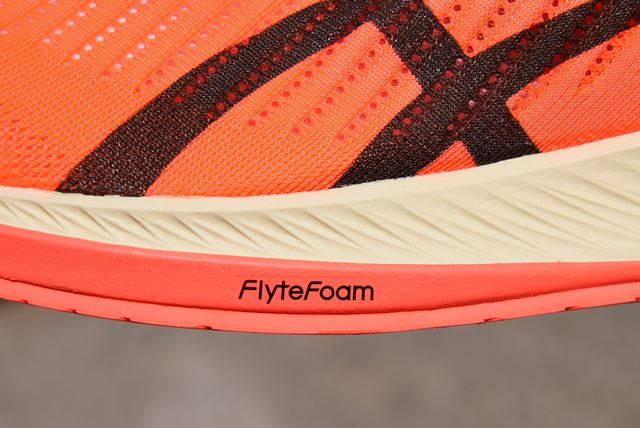 FlyteFoam is the material with which the midsole is constructed. There is no use having a good idea if you use a compound that is not up to par. And it is that some of the thanks of FlyteFoam is that it cushions, with a high rebound and response capacity (this is to take advantage of the energy and that the material is prepared for the next impact or stride). The grace, moreover, is that it uses organic fibers that make the material more elastic than traditional composites.

The appropriate type of tread to use this shoe is neutral and it must be taken into account that the insole is not removable unless whoever wants to remove it, starts it. This usually occurs in certain competition shoes, so that a personalized insole does not reduce efficiency or eat up too much interior space, damaging the support of the foot. 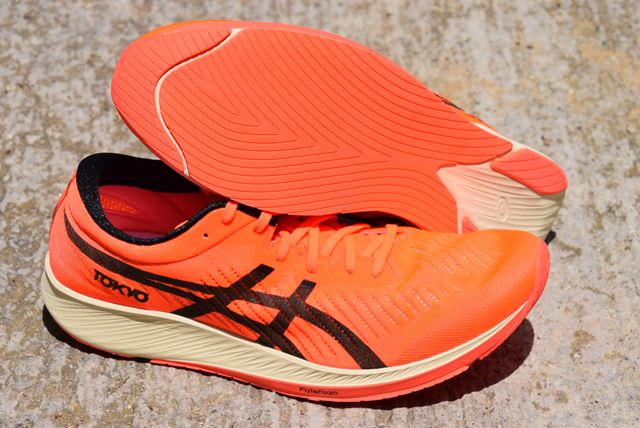 The ASICS Metaracer outsole draws attention because it does not present a design based on traditional studs, but a large solid rubber surface furrowed by many cuts that are what provide it with traction capacity. Very, very focused on a hard surface like asphalt. 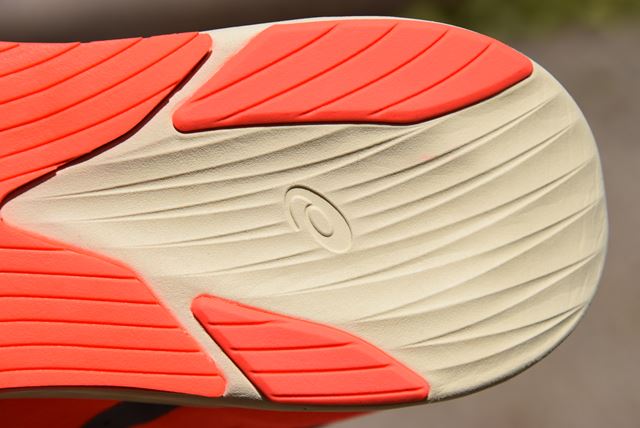 Actually, on the sole we are talking about four blocks: one on the toe, two on the sides of the heel and the largest of all, the one mentioned above, from the toes to the plantar arch. The central part of the heel does not have solid rubber (you can touch the midsole), but it is true that the profile of the athlete that is going to use this Metaracer is not going to enter much of the heel, precisely. 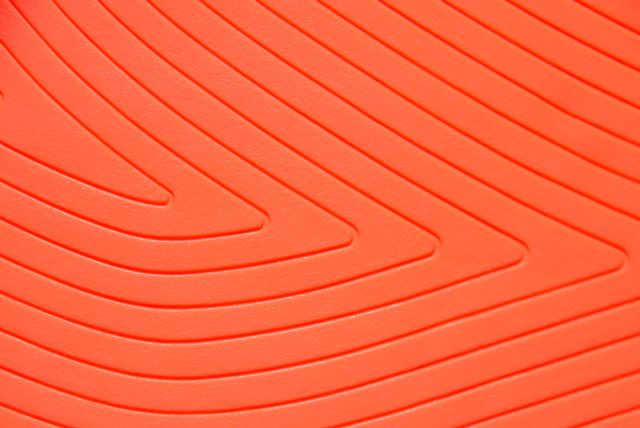 The material with which the sole is made is Wet Grip Outsole and it is curious because it is a solid rubber made from organic and non-organic components that provide good grip even on wet terrain. It uses a technology called ASICSGrip that is nothing other than that same rubber with the ability to pull on all kinds of surfaces, even wet. 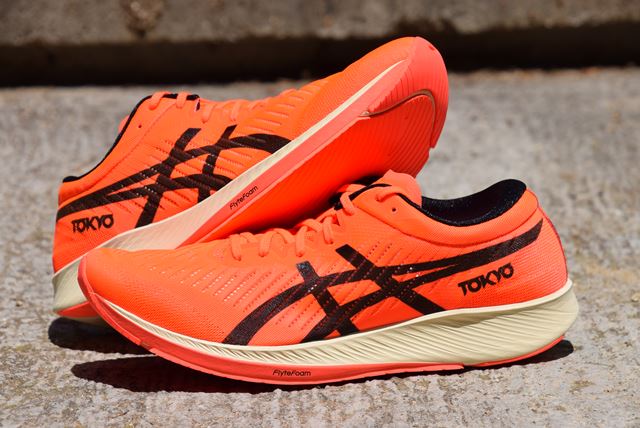 The ASICS Metaracer upper does not attract attention since it is the one that best corresponds to a traditional competition shoe: light, fine mesh, with minimal reinforcements to save on weight without compromising breathability or support. 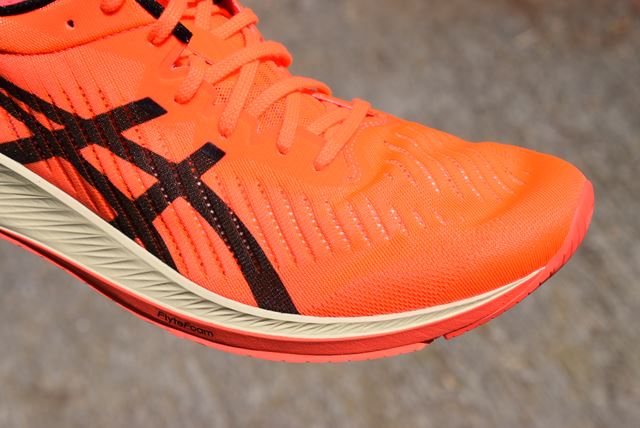 The mesh is engineered and constructed in one piece. It has dozens and dozens of perforated rows for maximum ventilation, even in the midfoot. The reinforcement in the toe, to protect the fingers is minimal, just a film hidden inside. 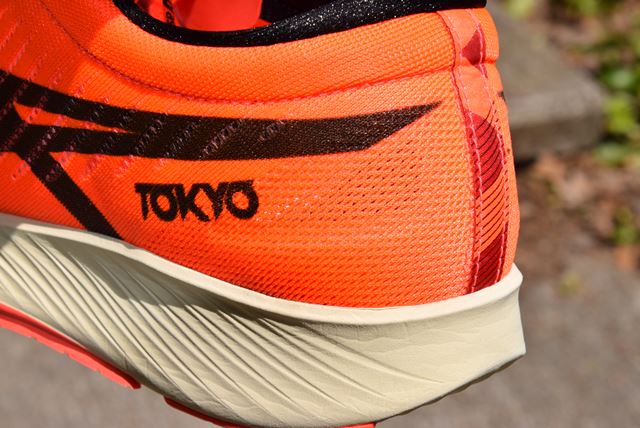 From behind, more of the same, unlike the daily training shoes, with structured and resistant buttresses, in this Metaracer it is only an insignificant reinforcement, I insist, in the line of the competition shoe that it is. If not ..., what would only 190gr / 156gr weigh? 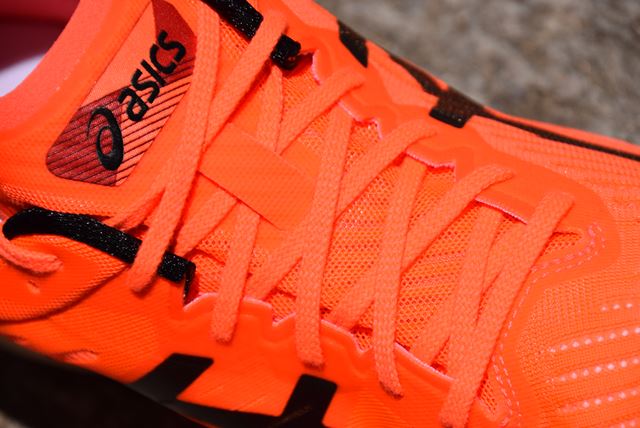 The tongue is very thin and has a pin so that it does not move during the use of the shoe. The flat laces are passed through it so that this does not happen. With six grommets, plus a free seventh for those who really want to tighten them. 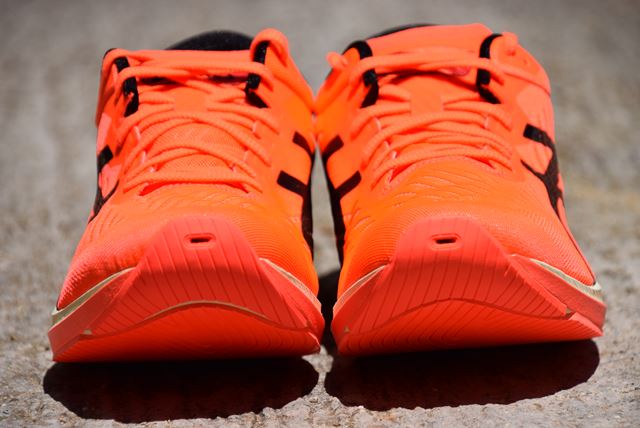 It is necessary to highlight a technical solution that can go unnoticed and is a hole in the toe, just where the material of the sole and midsole die in the form of reinforcement at the very tips of the fingers. This hole will help as the first point to capture air to ventilate the inside of the foot, thus reinforcing that breathability that I mentioned before and that can go very well even in cases where the foot gets wet, helping it to dry earlier.

ASICS Metaracer is a competition or flying shoe, with a construction of apparent simplicity, but that is the opposite: a sum of materials and cutting-edge technologies, applied to traditional formulas of building a competition shoe with a face and eyes.

The use of a carbon fiber plate following the curvature of the midsole and sole, in what is known as Guidesole technology helps to be more efficient in the race, reducing unnecessary ankle movements and helping to launch the next stride forward.

And it is not an alternative to other very striking models of the competition such as Nike AlphaFly or Adidas Adizero Adios PRO. This is a genuine model with which ASICS does not fool anyone with this flying shoe with radical overtones, but with more human performance for those who wear them. The human thing does not mean that anyone can use them. Well, anyone can buy them, but like all flyers, they are demanding for those who wear them and it is better that whoever uses them is hardened in quality training, and has a well-trained musculature to use competition shoes.

The type of footprint for which it is intended is the neutral (and the inner template cannot be removed). On the other hand, there is the weight of whoever uses them, because being a flier, she will always perform better with low weights or even medium weights. That to use them in distances from 5k to marathon and as long as the rhythms are fast. If the user has a high weight, perhaps the distances should be limited to 10k. For more distance, maybe they should look for a more structured shoe than this or try them, a lot, in quality training to see if it really supports them well in intensive use.

The official price of ASICS Metaracer is € 200.