Tendances Sneakers : Hoka One One Clifton 7 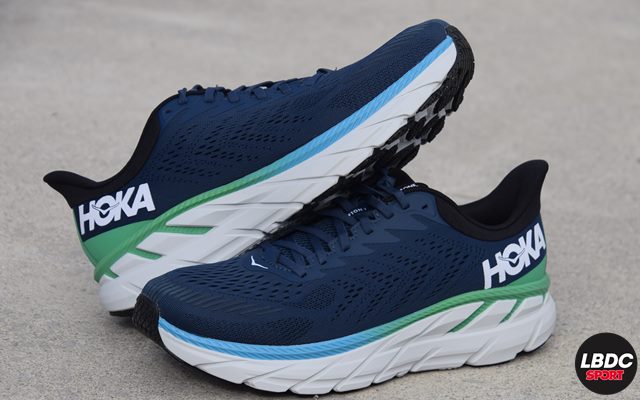 We analyze the shoe of running Clifton 7 from Hoka One One. From the outset, it must be said that it is a model very focused on running comfortably and for all the kilometers that are necessary. We are, therefore, before a shoe made expressly to accompany as comfortably as possible in all kinds of distances, including ultra resistance tests. 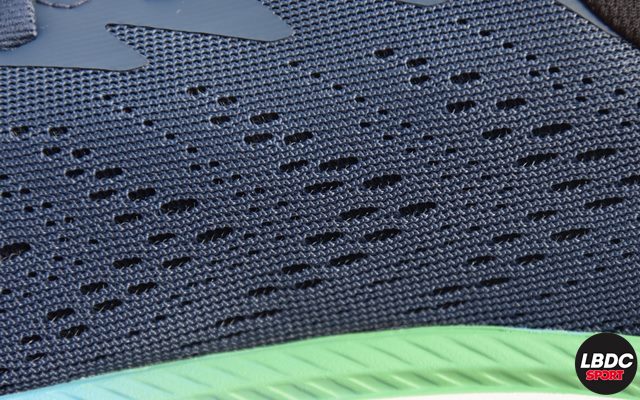 Also thought in case its use is daily training, it is mounted on the basis of its predecessor Clifton 6, although with a clear revision of the upper cut where the new mesh aims to keep it among the most comfortable and ventilated. 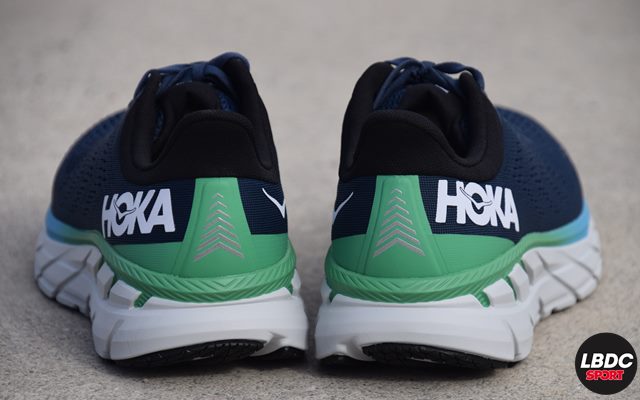 We see in Clifton 7 that Hoka continues to rely on Rocker technology (owned by the French brand), to continue obtaining a stable footprint and stride throws that are as fluid as possible. That in a thick midsole, but less than what it appears and that manages to contain in a fairly low total weight, such as 247gr in the men’s finish and 201gr in the women’s (hitting the 266 and 246 grams respectively of the previous delivery). We see it.

We confirm with the Clifton 7 midsole that Hoka no longer needs to create monstrous gauges to achieve the effect they once bragged: “blow up”. Without stopping using EVA (Ethyl Vinyl Acetate), they have now made it lighter and with compression properties that maintain the same effect as if they had worn the thick ones from before. 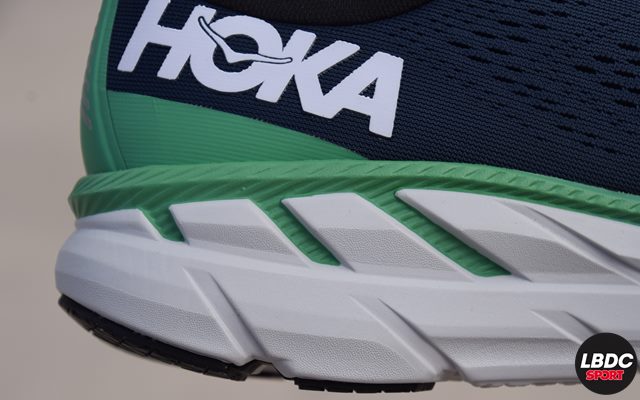 The originally French brand, but for a few years with American owners, has tried to reproduce its characteristic effect in less height and therefore shoes like this Clifton 7, which is designed to be used in infinite runs “only” has a thickness of 29mm in the heel area and 24mm in the forefoot. That in the men’s finish, because in the women’s is reduced a couple of millimeters up to 27 from the heel to 22 under the metatarsals. The drop, yes, is the same in both sexes: 5mm. 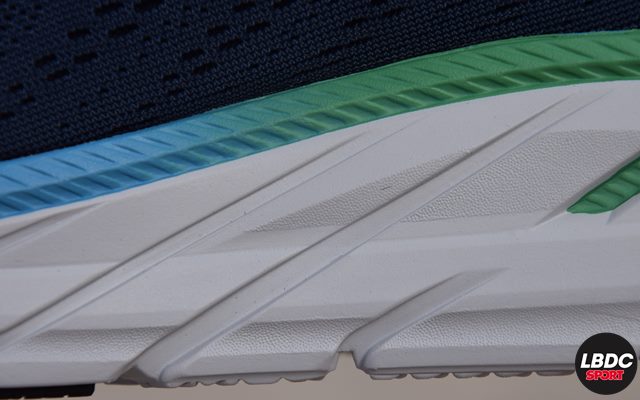 The technological element that stands out from the midsole is Meta-Rocker. However you want what, In training based on shooting, long runs and endurance or ultra competitions, the predominant type of footprint is going to be the heel, Hoka devised a system to assist in the footprint from the moment it contacts the ground.

And it is that this rounded finish of the heel is intended to tilt the footfall from the moment it is impacted and the transition begins continuing to take off from the ground through the goal area. From impact, that EVA material, collects the glove by absorbing the knock generated and collaborating in cushioning in a more reactive way than its predecessor foams.

The lateral grooves of the midsole continue under the shoe, until they rise on the other side and serve to make the EVA foam deform more easily and progressively. 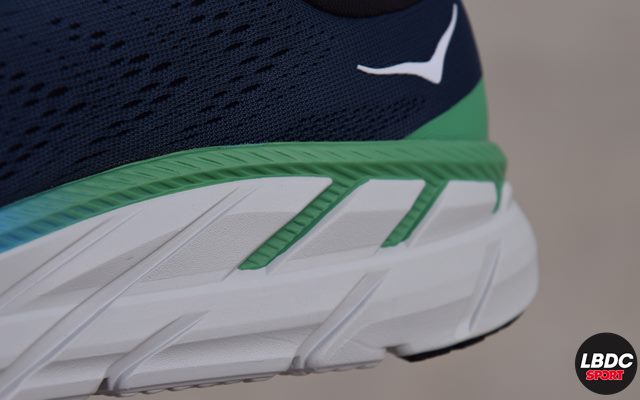 At a visual level, the midsole has a thickness that is not the real one. This is because the cushioned material rises up the sides to encapsulate the foot and keep it more easily in place and guide it during the tread (the unspeakable part is that it also serves to convince those whose eyes seek the recognizable characteristic thickness of the midsoles of the Hoka One One models).

Of the Hoka One One Clifton 7 outsole, it should be noted that there is not much reinforcement material that helps in durability. But that’s because Hoka, to achieve that important low weight, has to spin very fine… Y one of the candidates for snipping is the rubber of the soles, the heaviest material in a shoe. 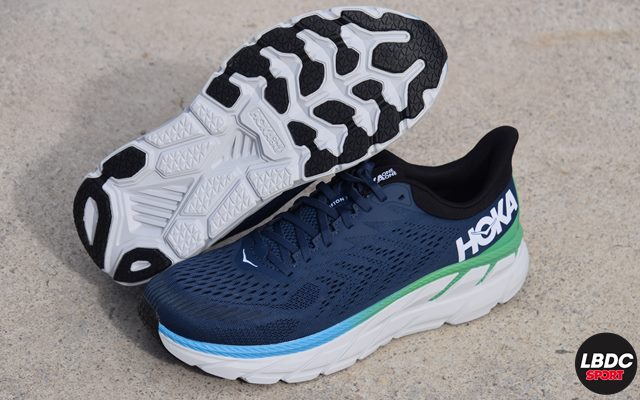 Obviously Hoka has worked it out because he has kept the minimum, yes, but in the areas of maximum wear such as the heel and forefoot. Thus, on the heel it leaves three large blocks of solid rubber hinting at the characteristic horseshoe shape, while at the front it does cover considerably more area, although it is surprising that the rubber is mainly located from a little further in front of the metatarsal point …

In any case, this solid rubber provides durability, which is what matters on a practical level. For the rest of the sole without this type of rubber, the material used is that of the midsole, to which the same shape of the studs has been molded.

And if there is not more, it is simply because the grams have to be scratched from somewhere that then makes us surprised by the low weight of the shoes, especially ato with a body as voluminous as this one.

The upper of the Hoka One One Clifton 7 is characterized by using a very open engineered mesh that seeks to be light and breathable. It achieves both, but that of breathability, with those huge holes in the area of ​​the fingers and already somewhat less open on both sides, it must be said that they do. only in sight.

Of course, the mesh is double, because it incorporates an inner lining that makes it more comfortable and easy to use. for whom want dress them without wearing socks. 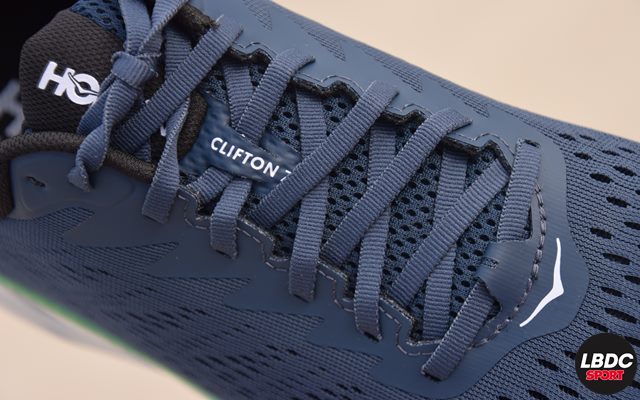 The laces are thin and long. In addition, apart from the six usual eyelets (reinforced with heat-sealed material and leaving a seventh free), they are also passed through the base of the tongue to also pull the front area of ​​the shoe.

Speaking of the tongue: it is very padded and Hoka could have saved the strip/pin that has in the center. The laces are passed through there, and that is what is surprising, because, as it is attached to the body of the shoe from the inside, it is no longer necessary this resource, because it is not going to move a millimeter. Perhaps it is an aesthetic or marketing matter to convince a potential buyer for whom it is forced to hold the tabs, that no I discarded them mistakenly not seeing a strip there. 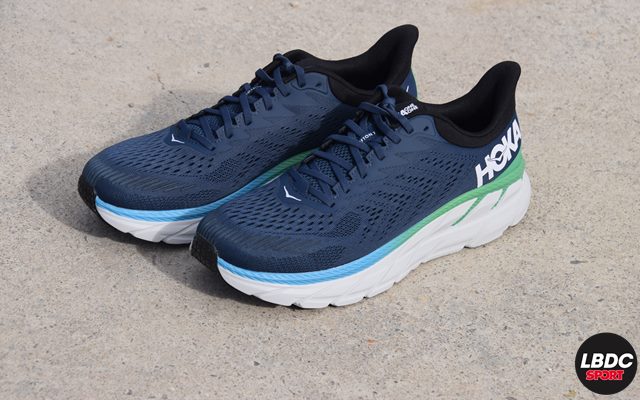 The rest of the bowl is also padded and is crowned by a heel so high that it acts as a shooter when putting on shoes.

The buttress of the heel is not visible, but is. It is a fundamental piece, although Hoka has hardly given it visibility, in some way, because of the height to which the foam of the midsole. By the way, the heel is finished off with reflective strips that will make the sneakers be seen from behind in terms low light.

Summary and Price Hoka One One Clifton 7

Hoka One One Clifton 7 is a sneakerrunning tilla, very tumbler Y for neutral tread, characterized by providing a great cushioning and, at the same time, that it does not penalize the weight. The search for a fast model that would satisfy runners who did not want to lose cushioning was the challenge that led Hoka One One to conceive the Clifton.

A great option for those who want to run for a long time and comfortably. Many training sessions (even daily) or endurance races, even ultras will be the environment ideal where to use them to get the most out of them.

Hoka One One Clifton, in its seventh installment, is characterized by its 5mm drop midsole and built in EVA. It reaches part of the sole, where the solid rubber is reserved only for the places of maximum wear: heel, metatarsals and toecap. The cut, or beveled on the outside of the heel favors a more progressive landing, giving way to a sole with a lot of contact surface with the ground. Above, a light and breathable mesh upper has heat-sealed reinforcements on the toecap.

The engineered mesh itself is stronger on the sides to reinforce the midfoot. A heat-sealed TPU material right in the area of ​​the eyelets, increases the forcefulness compared to the previous delivery. The practical strap on the heel is kept to help put on.

Maximum and lightweight cushioning for this saga that aims to become a veteran by polishing a very good product when it comes to running longer than short. The weight has dropped even more, now being 247g for the men’s finish and 201g for the women’s. 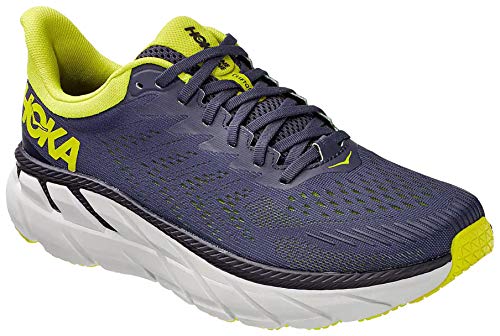 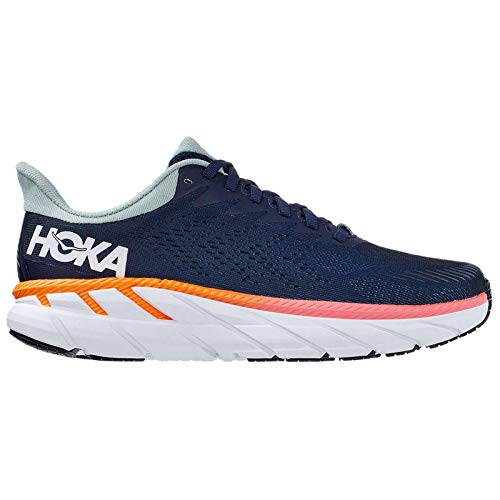 Hoka One One Clifton 7

Hoka One One Clifton 7