Tendances Sneakers : Hoka One One Rincon 3 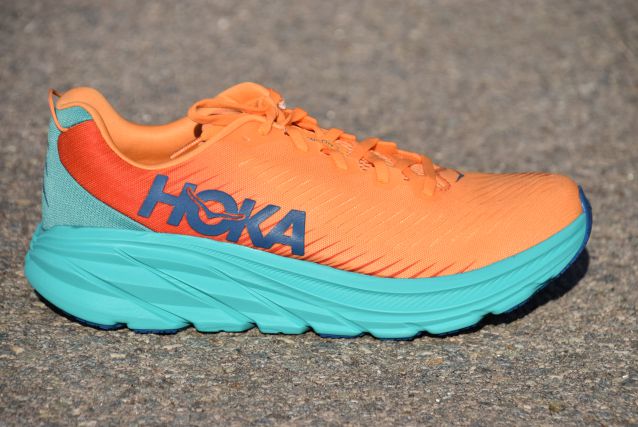 It’s here Hoka One One Rincon 3, the running shoe of the American brand with the best ratio between cushioning and lightness. It is very valid both for training and for competitions thanks precisely to that great combination between low weight and a careful midsole.

Hoka has also tweaked the design with an emphasis on colors, which are not flashy by chance. The slogan launched by the US-based brand goes in this sense: “Feel the speed of light” in reference to running light and also doing it with cheerful colors, expressly sought. 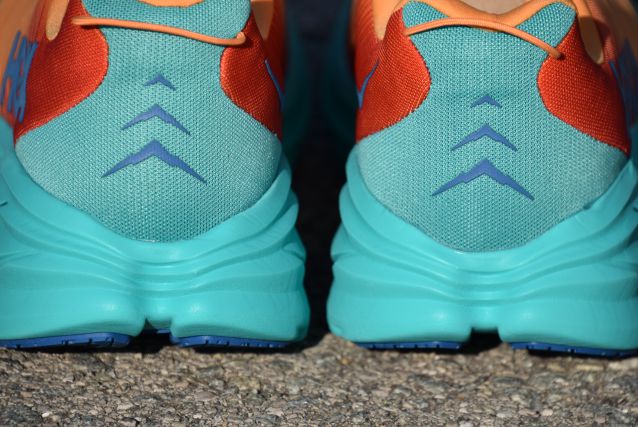 But not only do athletes live by colors. In the new Rincon 3 there are clear novelties such as a pull tab on the heel, to facilitate putting on easily and quickly; an asymmetrical tongue; an even more open mesh; or the aforementioned midsole, with a light foam and specific cuts to facilitate the movement of the foot during the tread.

And what he said about the lightness: a reduction of almost 10gr in an already light model. The weight of the new Rincon 3 now stands at a very low 210gr for the male finish and 176gr for the female … Less than many competition shoes!

It looks like a training shoe, but with flying shoe features. We see how it does it.

Hoka One One Rincon 3 Technical Analysis 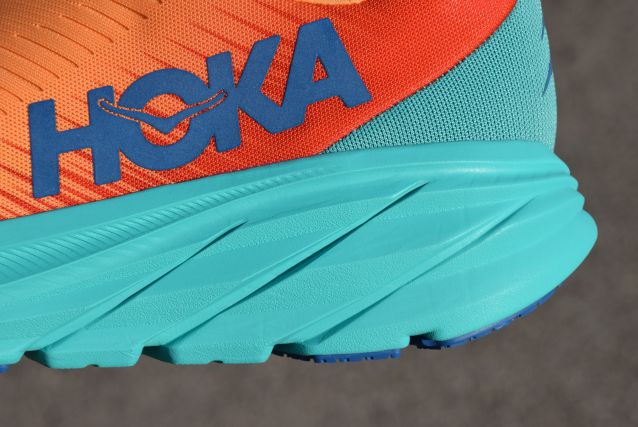 The Hoka One One Rincon 3 midsole is constructed of EVA material that has been shaped by compression. The fact of working for years with EVA and its different variables is what allows Hoka One One to achieve foams that stand out for being cushioned, durable and something about which almost all their models plan, in general, and this Rincon 3, in particular: extreme lightness.

This foam has been shaped by adding aggressive cuts to help you transition your footprint as quickly as possible. These cuts are easy to see as they go down both sides of the midsole and cross the sole from side to side, separating the rubber there and making it easy to flex the shoe despite the thickness when running. 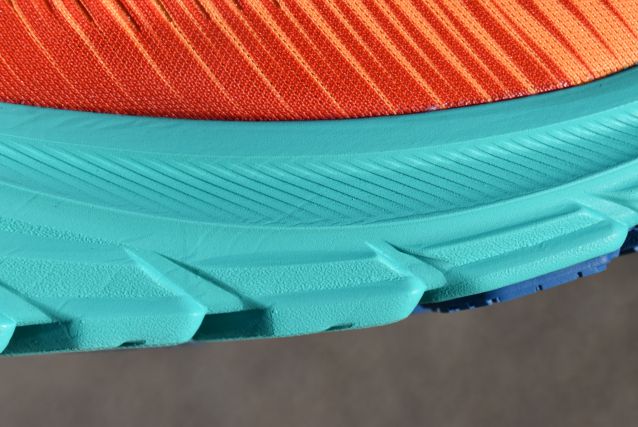 Those up to eight lateral cuts, and that transform into transverse stripes if viewed from the sole, are strategically placed so that they go to work in stages. They do it from the moment they enter the heel (if it is the case), until they come out through the toe, progressively as the foot is settling on the ground while tilting from back to front.

In the new Rincon 3 we find MetaRocker, which is a technology used by Hoka and which consists of giving a curved shape to the whole of the midsole (and sole, of course). Especially in the heel and the toe, to facilitate the smoothness of use when running since it favors the tilting of the foot from the moment it enters when it hits the ground, until it takes off in search of the next stride. If you take the shoe and look at it in profile, it is clear how rounded the heel is so that Metarocker starts working early on the footprint. 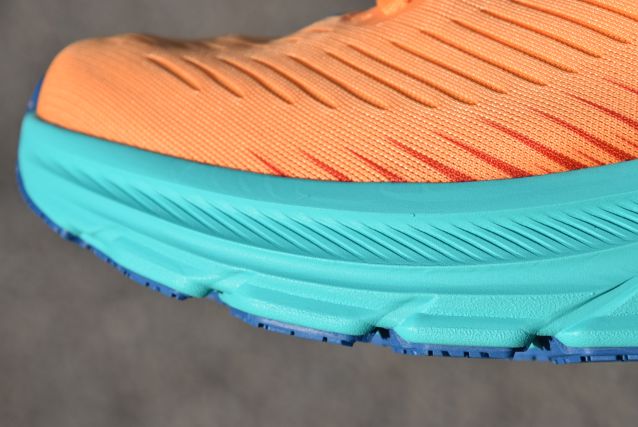 Despite the amount of material in the midsole (a volume of approximately 600cm3), the drop is relatively low: 5mm, for both men and women. That in the drop, which is the difference in height between the heel and the forefoot. What happens is that this drop, the same between sexes, is achieved by different paths: They, thanks to heights of 29mm (heel) by 24mm (forefoot), while they at 26mm by 21mm. 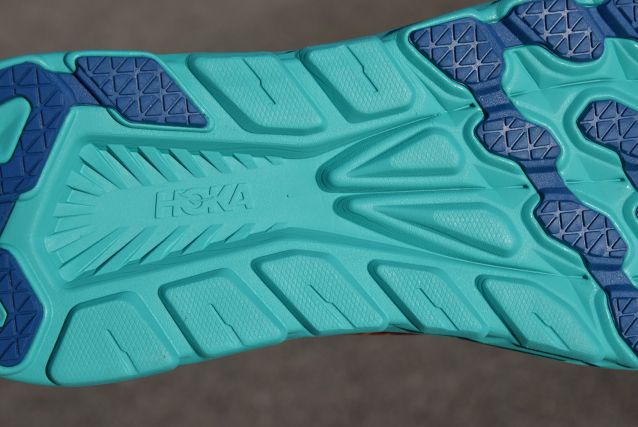 The midsole has one last function to cover: that of acting as the sole. Yes, because the success of the lightness of Hoka One One Rincon 3 is not in the use of light materials without more, but in how to use them. Thus, in the area where the sole does less work, just in the midfoot, or the entire area of ​​influence of the plantar arch, The heavy rubber of the soles has been replaced by the EVA material of the midsole itself which has been given the same shape as the existing taqueado. 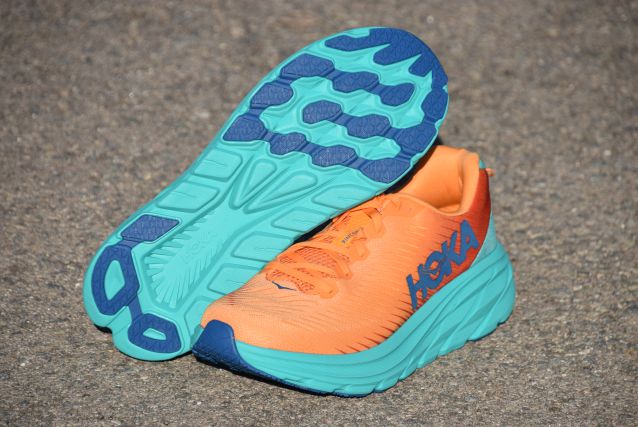 The Hoka One One Rincon 3 sole stands out for having a lot of contact surface with the ground. Although I have already explained that solid rubber is not used in all of it, but basically in the heel and forefoot (the middle area is the EVA material of the midsole itself).

Focusing then on the heel and forefoot, it must be said that the function of the solid rubber of the heel is mainly durability. This part of the foot is the one that first contacts the ground when running and suffers a lot of abrasive wear. 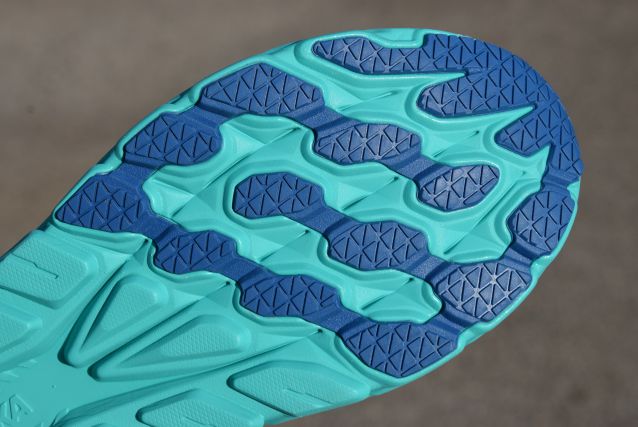 On the other hand, the wear of the forefoot (metatarsals and toecap) has more to do with traction, since it is with this part of the shoe that we push ourselves with each step.

So, since solid rubber is the heaviest material in a running shoe, Hoka distributes those rubber reinforcements only in the areas where it needs to be most resistant to wear from rubbing or abrasion. 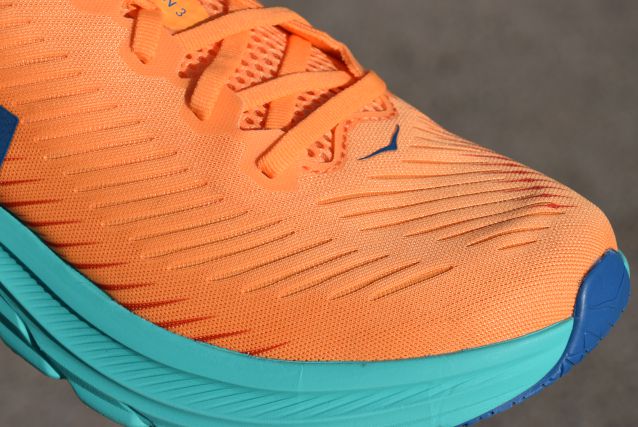 The upper of the Hoka One One Rincon 3 uses a highly ventilated mesh that provides great breathability. It is easy to appreciate some diagonal cuts that are arranged throughout the upper. These cuts hide larger openings that are precisely those that facilitate this characteristic of breathability in order to keep feet as cool as possible. 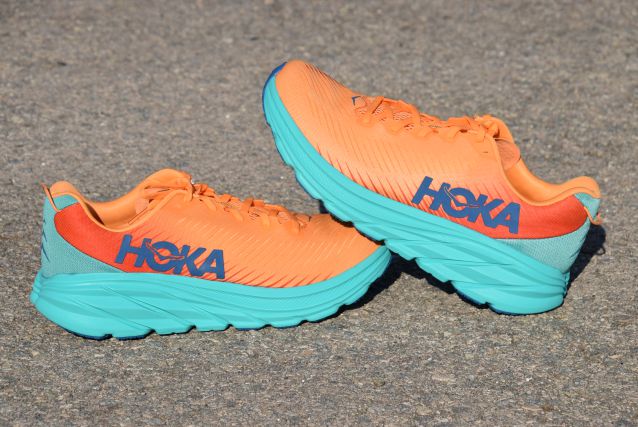 And although these cuts are everywhere, they are more open in the area of ​​the fingers and on the outside, and less on the inside, since Hoka does not forget that the mesh must have enough strength to hold well. to the foot in all phases of the tread.

The general lightness of Rincon 3 also appears here. This design of the upper is also focused on saving in weight and collaborating with that final result discussed before 210gr in the men’s finish and 176gr in the women’s one. 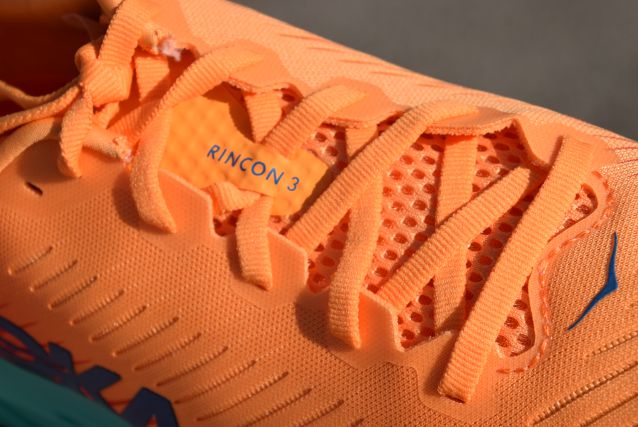 The tongue is asymmetrical (it is somewhat longer on the inside) and above all very thin and light. It is all perforated, from bottom to top and only has a synthetic reinforcement in the center, which is for one to locate a strip through which the cords are passed (which, by the way, are flat). The function of this strip is that the tongue does not move laterally while we run, something that would be quite annoying.

The work in favor of breathability is evident in the insole and even under it. It is perforated to ventilate, but also, to facilitate this, the footbed, the material between the insole and the midsole itself, is also perforated, seeking the greatest possible air circulation in a space where this is very difficult.

If we get to the heel, it is reinforced, although not forcefully (again saving in weight) and has a good detail in the finish as it is a practical strap that will help to put on more easily and quickly.

Summary Hoka One One Rincon 3 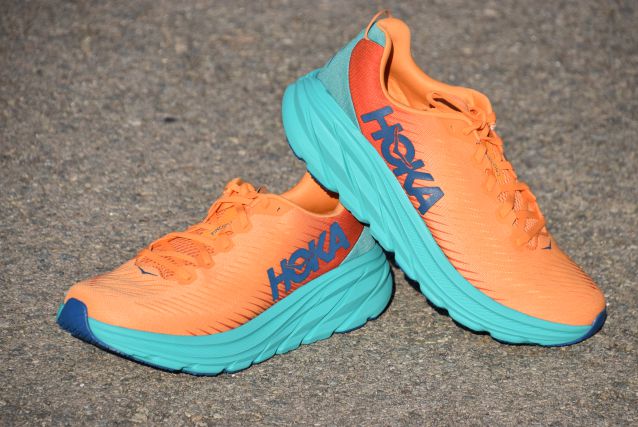 Hoka One One Rincon 3 is a very versatile running model from the American brand, but also a very good option if you want to use it for competition. His great asset is that helps to run comfortably and, above all, light. On an aesthetic level, say that Hoka has launched the new version of Rincón inspired by bright and bright colors, making a nod to its motto where it plays with light and energy.

Comfort of use comes from a large midsole. “Great” because of its thickness and also because of the use of a pressed EVA, which is what gives it that shape. Hoka has added aggressive cuts to give it agility of use and flexibility during the tread. It maintains the 5mm drop of its predecessor, thanks to heights of 29 / 24mm for men and 26 / 21mm for women.

The outsole is designed with rubber in the heel and forefoot, the areas of greatest wear and traction. On the other hand, in the area of ​​influence of the plantar arch, the material is the same as the midsole, to help make the shoe as light as possible. On the top, a light, open and breathable mesh will help keep the foot as cool as possible.

Since it is a comfortable shoe, it can be used in filming, although for this there are already other options within Hoka such as Hoka One One Clifton, but that is the grace of its versatility, that in reality Rincon 3 is more optimized to carry it to races, regardless of the distance. Due to the lightness and reactivity of its midsole it will not be.

The weight is just 210g for the male finish and 176g for the female, thus making it one of the lightest asphalt-focused running shoes.