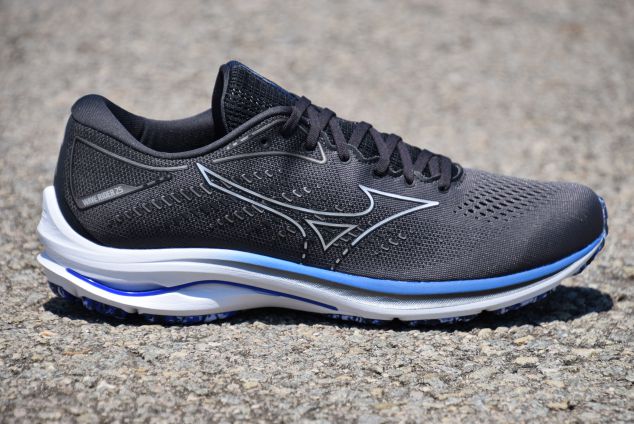 Mizuno Wave Rider, one of the best running models for training reaches issue number 25. This is one of the most important figures in shoe sagas, since very few, only the really good sagas, reach this point. And much further … even less. In fact, there is still no technical range shoe that has reached (or comes close to) 50, for example.

But what is happening with the new Wave Rider 25 is different. And they are celebrating it a lot (I’m not going to say too much, I’m not going there). What I mean is that the impact on the brand itself is noticeable … They have even released a commemorative t-shirt …! Yes, Mizuno! The thing is that, knowing that they are very, very Japanese, the motto says everything, I think: “Celebrate our legacy, as we walk into the future.” 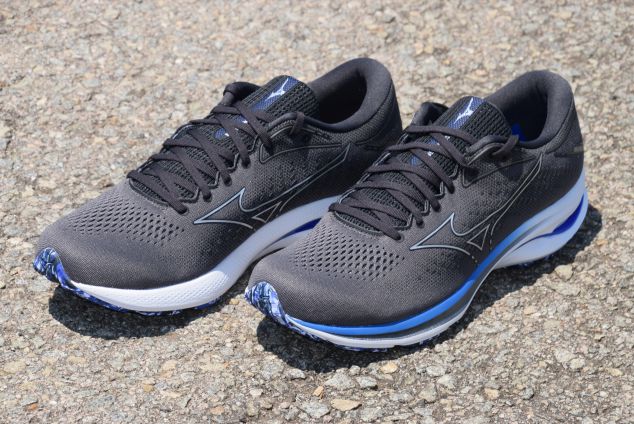 Beyond marketing, you can see that it really is a milestone for this brand, because “the Rider” has been the repository of many of the great improvements with which many have praised this brand. As, for example, it was the first shoe to incorporate Wave itself, which for many is a symbol of quality and performance. Or many years later, specifically last year, when Mizuno Enerzy broke in, dislocating many. Entered through Wave Rider 24… Yes, by “the Rider”.

Mizuno refers to the new Wave Rider 25 as the best “Rider” in history (and it will be like that, if not, we would be bad). But the thing is that the Japanese brand, to its usual technical discourse, has now also added with the will to help in the enjoyment. Of course, there is a characteristic in which it does not vary … and that is that it loses weight again 😉, now 275gr in the men’s finish and 230gr in the women’s one. 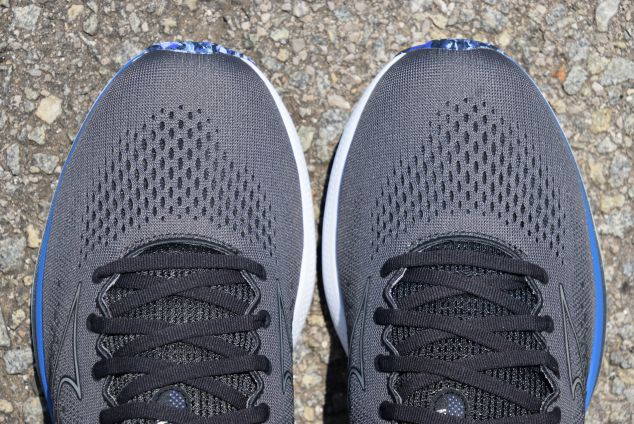 And it is that in the new Mizuno, Wave Rider 25 pivots around a compound called Mizuno Enerzy that is changing things not only model by model, but also that concept so coined that in this Japanese brand comfort was sacrificed for performance. Well, it seems that some will be difficult to defend that position now. Or what is the same: If we already saw that the firm midsoles characteristic of those from Osaka were giving a bit to compounds that were somewhat kinder to the touch, with the arrival of Mizuno Enerzy, all this jumps into the air. Literally.

Thus, this daily training shoe for neutral tread or insole is going to be a good option for those looking for a high level cushioning, comfortable but, mainly, with a high sensation of propulsion when running. All thanks to several factors, but above all, to the combination of the Mizuno Enerzy compound and Wave technology. A lot to cut … Let’s do it. 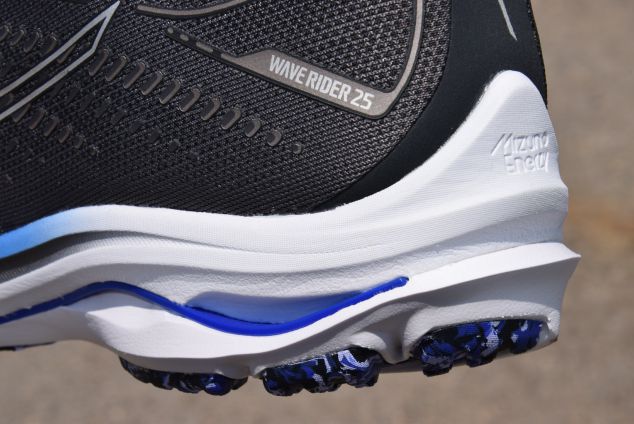 To explain the Mizuno Wave Rider 25 midsole, it ends before mentioning what does not change than everything new. So I will say that the only thing that does not change is the drop, since it remains in the 12mm of previous versions (the drop is the difference between the height of the heel and that of the front part …). On the other hand, the height has varied, and a lot: now the heel measures 36mm high and the forefoot 24mm.

And if in Wave Rider 24, Mizuno Enerzy showed the paw (completing the rest with the U4iCX material), it now occupies the entire upper part of the midsole and the outer part of the heel. This is how Enerzy’s gain of 17% more cushioning and 15% more energy return with respect to other earlier compounds than those of Osaka. 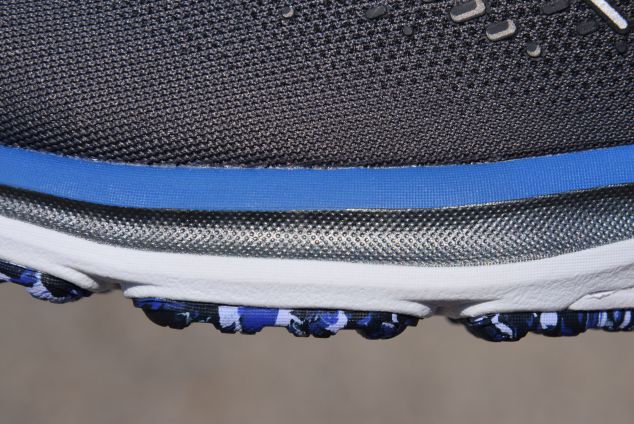 That said, it occupies the outer part of the heel, to clarify that sometimes a different material is used, but here it is not the case: it is also Mizuno Enerzy.

The wave plate inside has also been modified. In its usual work for cushioning and stability, Mizuno has thought about taking advantage of it. I already wanted to see this brand move in these terms …

Because with the appearance of a certain “miraculous” shoe from an American brand, with which stratospheric brands have been beaten, I already noticed that, if they were capable of achieving caliber size without having experience in working with plates inserted in the midsole … what it would happen with THE BRAND specialized over years, decades now, in designing and manufacturing plates to improve the quality and performance of its shoes. Well, that brand was Mizuno and this new wave plate indicates that the giant has started to move. 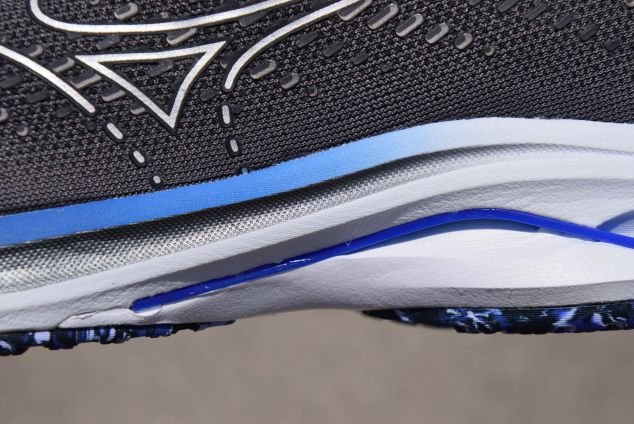 Now Wave is longer. It pokes its head in the midfoot, seeking, as always, to help stabilize the footprint and manage the cushioning, but now it also affects how the foot reaches the end of the transition of the footprint. On this Wave Rider 25, your goal is to improve the feeling of running with less effort.

Another technology present in the midsole is SmoothRide. In reality, it is the concept by which all the elements of the midsole fit together to manage the footprint in a fluid way, all the elements working as a team. That is to say: add materials, design, the effort they make between all and how the tasks are distributed, so that the acceleration and deceleration movements of the foot are carried out fluently. 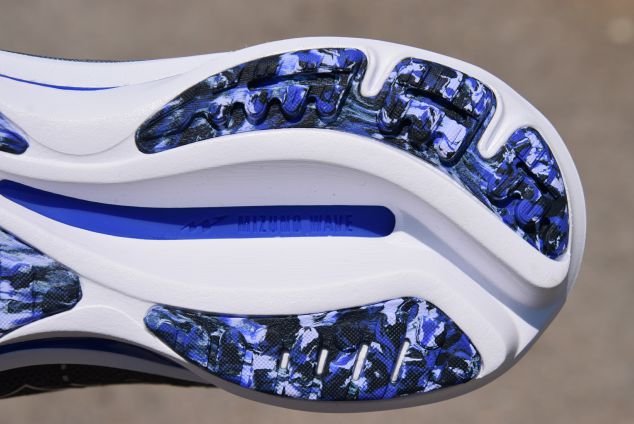 If it weren’t for the details, you could say that the Mizuno Wave Rider 25’s sole is just like its predecessor. And it is that the design features resemble broad strokes, but that if you look at it from a distance and in low light 😉 Well, actually there are changes, although nothing radical. Rather, polish the previous design, which was totally new compared to Rider 23.

We keep finding a horseshoe-shaped heel. What happens is that it is not the same. The outer face, the one that takes all the first impact when we run, has three islands of studs and before four. Of course, three take up more space, which is almost the same surface as in the previous finish. Inside it is a single piece, but sharper. 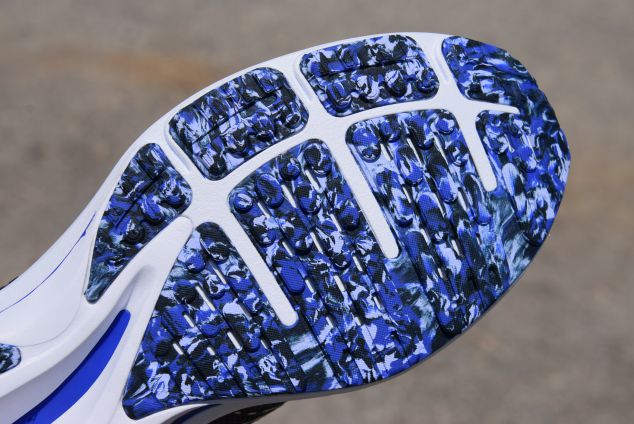 On the other hand, under the metatarsals the nuances are more appreciated. The most visible is the union of all the taco islands. It is noted that the Japanese brand has sought to balance the sole more than in Rider 24. If in that there were seven islands of studs and only two of them were joined by just 2cm of rubber, now there are four islands joined and with about 6cm of rubber , adding the three unions. Joints that are all on the inside, which is what leads us to the idea of ​​reinforcing the stability of the sole itself.

And if the studs were more like rectangles with rounded corners, now they are round or elongated studs, depending on the area. This is how Mizuno distributes the surface in contact and how free the grip must be. 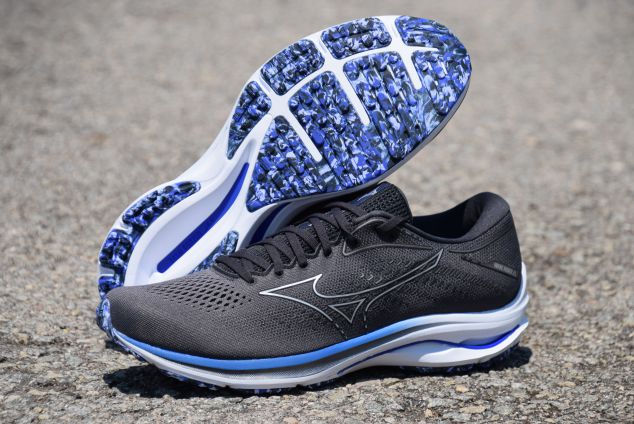 Throughout the interior of the sole you can see a large longitudinal stripe, which begins in a large hollow under the ankle, and progresses towards the toe, narrowing and helping to guide the foot during the transition of the tread.

All that at the design level… And the material? Well, fine cinnamon: X10. Mizuno’s toughest solid rubber. A type of rubber to which carbon is added in order to increase durability. X10 is a type of solid rubber that only fits into models from the Mizuno technical range, since it is not a cheap material, of course. As it is a Premium range training shoe, it is logical that the rubber should be resistant and durable.

The upper of the Mizuno Wave Rider 25 arrives completely renewed, and here we see the effort on the part of this Japanese brand to meet the essential ecological needs. Thus, an element that we find in the upper cut is a plastic polymer, specifically polyethylene terephlate (PET), a material that can be recycled several times and is perfect for making fabric. Like those of the laces or the lining of the collar, in shoes in general, and this Mizuno Wave Rider 25 in particular. 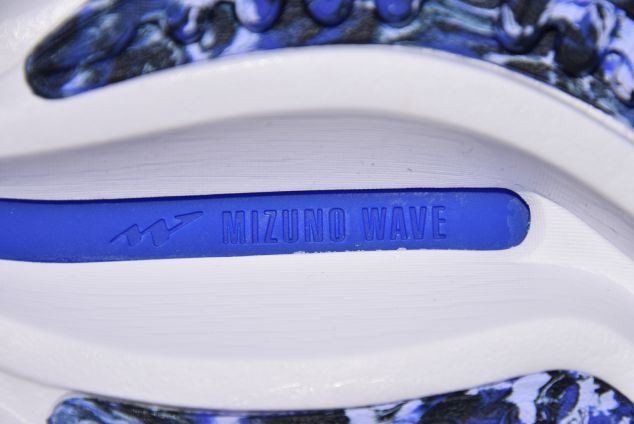 By the way, speaking of an ecological product, I make a brief jump back to the midsole to explain that, the Wave plate that was previously manufactured in Pébax, is now made from castor seed oil (which emits 38% less CO2 than the previous material). 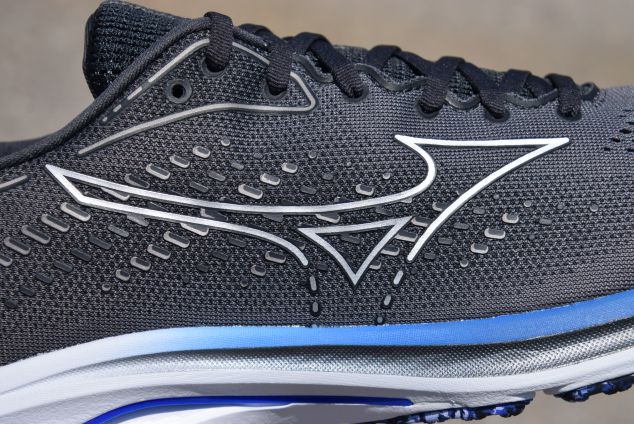 It uses a double layer Engineered Mesh. It is actually a high-end Jacquard fabric that seeks breathability, flexibility, and fit. Logically the lightness is always there, and more if you do not use large solid reinforcements as in the past. Although he does use reinforcements, of course. First there is the logo of the brand, the Run Bird, right in the middle area, to give packaging to that area.

In addition, and very sneakily, passing like some nice accessories to make it pretty, we see some pieces scattered around the mesh, but only on both sides of the foot. It’s not by chance. This is the area that needs the most support and these inserts reinforce the mesh’s resistance to the swings of the foot as you rock back and forth. 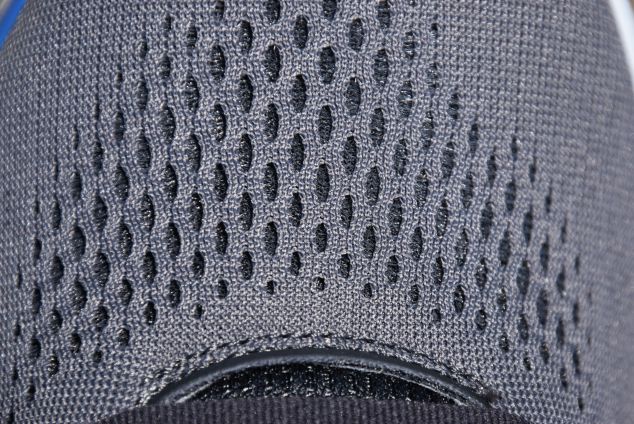 Another technology present is Mizuno’s own AIRmesh. It makes the mesh very light and breathable, having the most ventilated part of the fingers, just the one that needs it the most. And like SmoothRide, here in the upper there is also a technology that is responsible for everyone working as a team. It is DynamotionFit and it is in charge of connecting all the elements of the upper so that the foot is well supported in any situation. 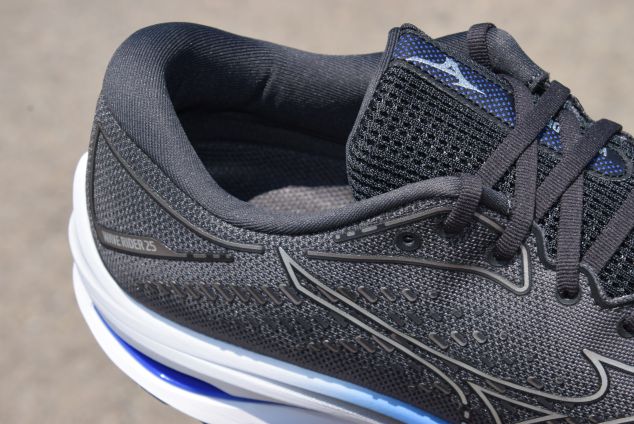 The laces are flat and are passed through six eyelets, leaving one free in case someone seeks to tighten their foot even more. The only reflective element is the Run Bird logo on the heel, right in the center and turned, given the narrowness of the place. But it will do its job well, which is none other than returning the light to those who illuminate us at night from behind, in low light conditions, such as a car, when we are running on or near the asphalt.

Mizuno Wave Rider 25 is one of the most successful models of the Japanese brand. It is a sneaker of daily training for neutral tread or insole and focused on runners looking for both good cushioning and great performance of the shoe. Those who go beyond in terms of technology level and in squeezing a fast daily training shoe will take advantage of it.

The midsole incorporates several cutting-edge technological solutions, such as the new Mizuno Enerzy material, which provides softer and more responsive cushioning, and the Mizuno Wave System, in this version not only in the heel but throughout. Together they provide one of the best damping on the market as only Enerzy provides the new Rider 25 with 17% more damping and 15% more energy return.

Underneath, the outsole uses micro-expanded rubber for a winning combination of traction, grip and durability. And above, the renewed upper (a double Engeneered Mesh type) is biomechanically designed to improve breathability, fit or comfort. It uses a 3D design that adds depth and expands detail.

They will be able to use it, getting the most out of it, mainly middleweight runners (or medium-low or medium-high weight, but without going to extremes). With a 36 / 24mm midsole, the drop of the shoe is 12mm, while the weight is 275g in the men’s finish and 230g in the women’s. 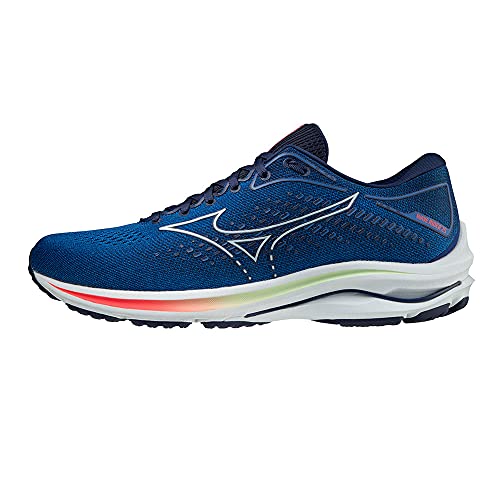 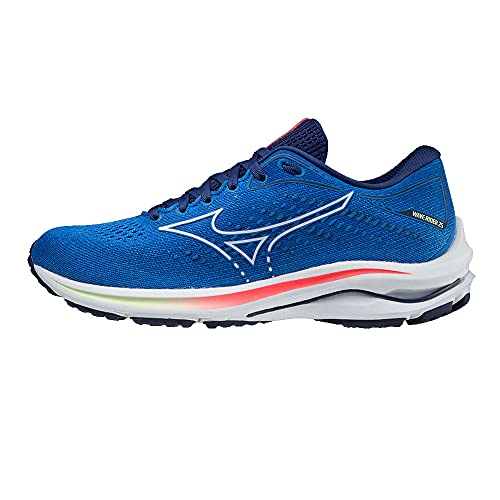