New Balance has presented Fresh Foam Lazr v2, a complete renovation of the first delivery of this very versatile training shoe. So versatile is that, being a daily training running shoe, it can be used, if it is the case, in activities of the gym or combined with other types of sport where the foot race complements.

But one thing that catches your attention when you hold it in your hands is its low weight. Far below 300gr, it reaches only 258gr in the men's finish and only 202gr in the women's finish. A pen, come on. Lately, New Balance is pleased to take very light models. Proof of this is one of the surprises of the year: Fresh Foam Beacon, included in the Best Running Shoes of 2018.

To the touch you already appreciate that the comfort of use is going to be another factor in which the softness of the mesh, both the exterior and the interior, its lines and its finishes stand out. That's where HypoKnit comes in, which I explain below, in the upper section.

Let's see what this shoe stands out with which New Balance aims to reach very different profiles of runners and brokers. 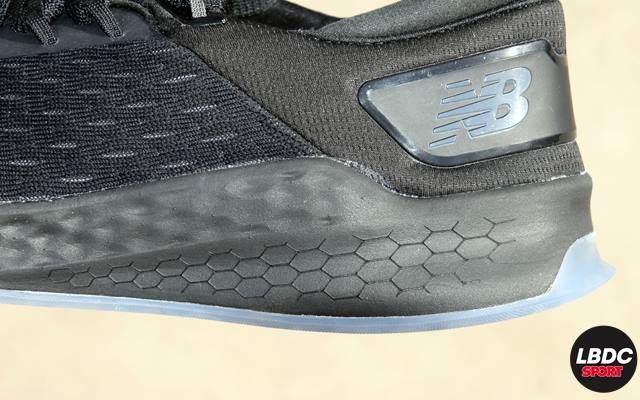 Fresh Foam provides a great cushioning and so soft. But this, in addition, is a new Fresh Foam, with parts laser engraved. The way this is done is based on perforations made in specific places of the midsole thanks to the data that New Balance handles in its Data to Design program (collecting information on the way of running of thousands of runners and brokers). In this way, the Bostonians know how to treat each part of the midsole, if they want to provide more softness, firmness or control of stability.

In this Lazr v2 it is easily recognizable by the laser-cut rhombuses seen on the outer face of the midsole. These cuts allow you to improve the cushioning of this material because with respect to the deformation caused by the pressure of the runner to hit the ground when running, New Balance manages to control part of it to make the feeling softer and lighter. 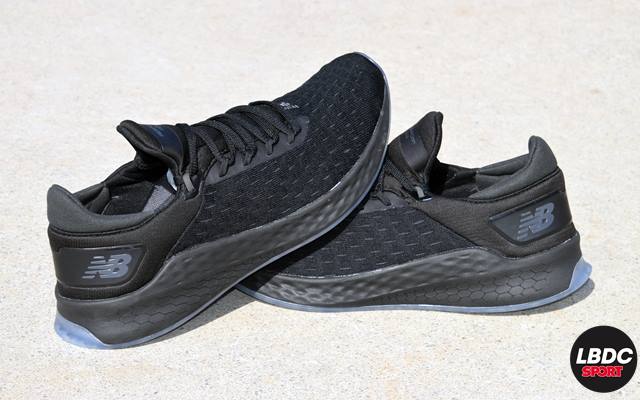 Laser engraving allows comfort to increase, but elements such as stability are not neglected. Being a shoe for people with neutral tread, on the inner side of the midsole, the material behaves more firmly thanks to the fact that the material is more compact in this area.

And although aesthetically it seems that it has a very high heel compared to the metatarsal area, this is not so: The drop is only 6mm. The "deception" is caused by laterals of the midsole that rise higher than the base of the foot. This is so to provide greater support of the base of the foot and stability. Speaking of base, if you look at the shoe from behind, it is clear that it has a clear wedge shape, being wider as it approaches the ground. Come on, it's a sum of elements to keep the foot stable and secure. 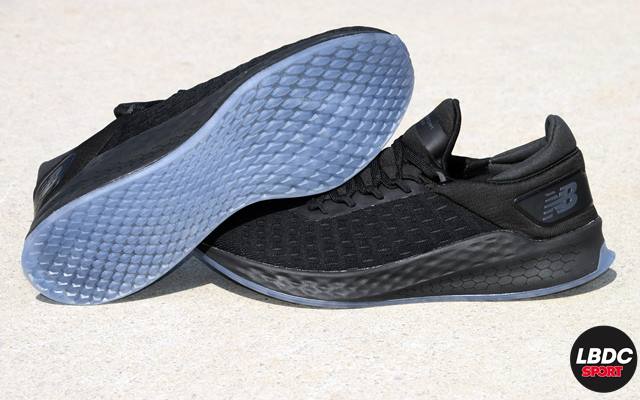 The sole of New Balance Fresh Foam Lazr v2 is another argument to say that we are facing to a very versatile model. The design is in waffle, no doubt, as befits a running shoe. In fact, its more than 200 tacos (I have not counted them all, but almost: distributed in 25 rows, ranging from 4 to 19 units, say that Lazr v2 exceeds that figure) are designed and distributed to offer traction in all kinds of surface, both hard and soft (earth, for example).

But, even if you say that the design is waffle, it is not so radical as to get too caught up in activities that are not specifically running. The surface in direct contact with the ground is wider than it seems, precisely because of the wedge design of the midsole, reaching 90mm just below the heel.

The material that New Balance uses in this Lazr v2 is Melon Rubber, a type of solid rubber that provides lightness to that traction that is expected. They have made it transparent, although not so much that it clearly distinguishes the Fresh Foam from above and the laser perforations it carries. 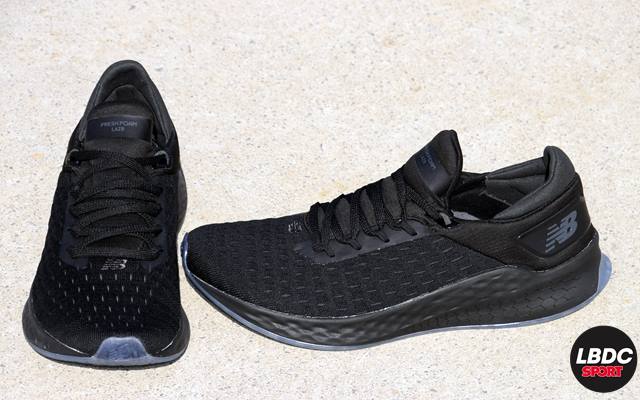 The New Balance Fresh Foam Lazr v2 upper stands out above all for one element: HipoKnit. This is a type of mesh that gives it a "Premium" setting, as NB likes to say. But come on, that the explanation is found by analyzing several factors that characterize it.

The molding is 3D, taking into account the shape of the foot. In the end it is a booty structure that hugs the foot following its entire contour. The framework with which this mesh is forged is elastic, allowing it to yield at some points. This is very interesting for those who have parts of the foot that do not follow the canons, such as bunions or other characteristics in a limb known to concentrate more vicissitudes than any other of the body. It is an adjustment that varies according to the area so that it adapts dynamically. 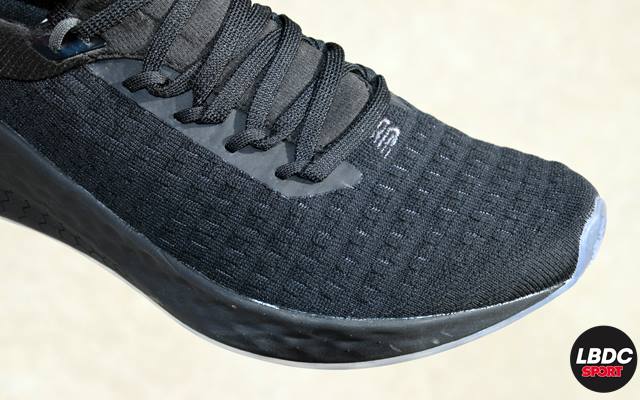 One of the things that has caught my attention in this model is the absence of the big "N" that characterizes the models of this brand. It is not because of a visibility issue or that the brand is seen, no. Is that New Balance, like other manufacturers, uses that great letter, normally stitched, to provide extra support in the area of ​​the foot half ... That's why my thought has been: "If the mesh is elastic ... and there is no "N" in the midfoot ..., will this shoe be able to hold correctly in the middle zone, where it is needed most?"Well, this Lazr v2, I have answered myself because stretching the mesh I have found that the elasticity is greater in areas such as the fingers and, in contrast, in areas like the midfoot is less elastic, since this is where more demand for restraint there is.

New Balance has reduced the number of breathable layers in this Lazr v2 to practically two: one external, with large openings and resistant to degradation, and another internal, in contact with the foot, more focused on providing comfort. And as I said before, the design thinks about the subject, controlling the direction and the stretching capacity of the material.

The laces are flat and shorter than long. They are passed on each side by four straps with double base that make the actual surface of subject is equivalent to eight eyelets. Underneath, the tongue has only the aspect, since it is part of the upper, as booty and its function here is more of a shooter when it comes to putting on these Lazr v2 than anything else.

Inside the bowl there is no excess of padding and, in any case, it is practically under the malleoli, so that there is no space without filling and the foot remains in place. 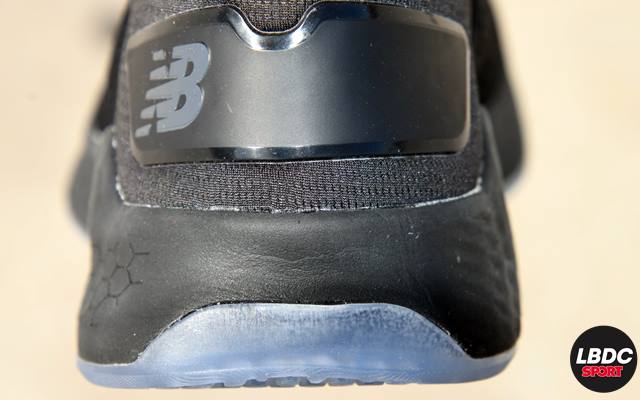 Behind Lazr v2 we see an important piece: Achiles Heel Pocket. It is an external material constructed in TPU (visible in the heel) that blocks the Aquiles at the moment in which the foot hits first against the ground, increasing the stability of the march. It is not very strong (compared to others, which are rigid and non-deformable structures). Here it is malleable to the touch with what is presumed to contain it, but not in excess and without pressing it.

The visual aspect is defined mainly by the upper part, which is the most visible part. And of this Fresh Foam Lazr v2 we must say that it has a very wearable aspect. Maybe many do not care when it comes to running, but those who usually combine them on a day to day basis will surely like it. 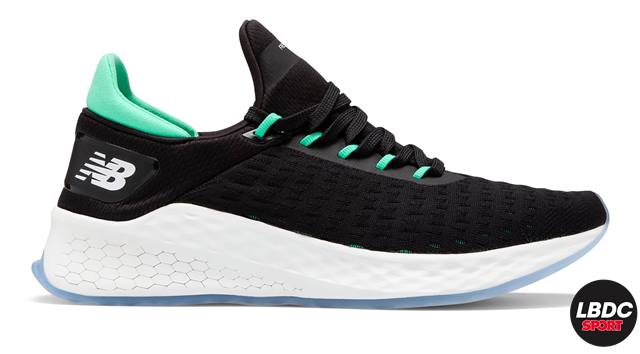 New Balance Fresh Foam Lazr v2 is a daily training shoe for neutral tread or seedling. It is ideal for those looking for a soft but clear cushioning. The rhythms to which it would be directed are those of the continuous running shoots, although their low weight make it a good excuse to attack more cheerful rhythms to which one or one usually goes. And if there is one day a week that is dedicated to the GYM, this shoe comes as a ring to the finger, since it does not have an aggressive tapping on the sole that is keyed in the parquet floor.

The foot is well attached, but it is not a shoe either to remove it from the context of streets, roads, sidewalks and parks. In those places, perfect, but come on, that the mountain would not take them. The sole would grip on irregular terrain, but above it does not carry enough reinforcements and restraints for life in the field ... But because that is not their job. For this, New Balance has trail shoes such as Fresh Foam Iron or Summit K.O.MK and Summit Q.O.M that will fit in any terrain.

And despite having a great cushioning, Lazr v2 being a shoe that does not have strong fastening elements, I would not recommend it to those who have a very high weight who also want to travel long distances (for this I would recommend a Fresh Foam 1080, without leave the brand itself). That would be the only case, since its versatility makes it valid for most profiles.

Take into account that your drop is 6mm. On the other hand, its weight is really low: 258gr in the case of them and 202gr in theirs. The official price of this New Balance Fresh Foam Lazr v2 is € 120 (See offers) 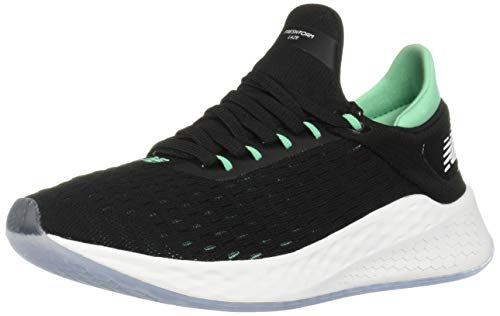 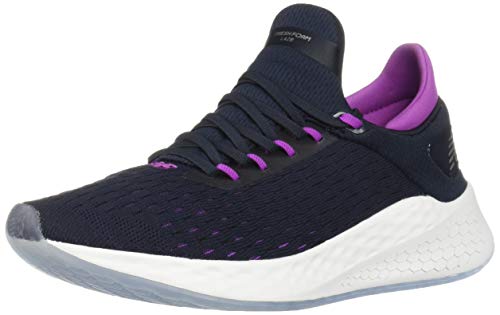