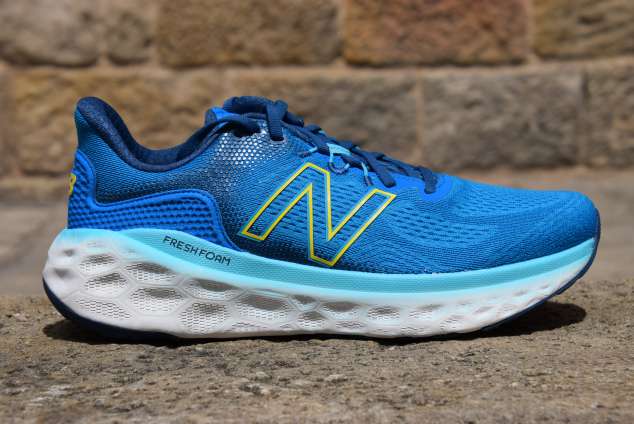 We analyze the characteristics of New Balance Fresh Foam More v3, which happens to be the training shoe with the most cushioning of this American brand. Following the successful idea of ​​the arrival of the model with the largest New Balance midsole, the new More v3 has been completely renewed, from the upper to the sole through the midsole.

As I said, the concept of a cushioned shoe, with a maximalist midsole and with the Premium cushioning material that is Fresh Foam X (the best Fresh Foam foam created by New Balance since its introduction in 2014) has been a success, as those who enjoy it attest of its maximum cushioning, which is also very soft, and reactive. The fact is that touch-ups on the upper, touch-ups on the midsole and, above all, touch-ups on the sole make this new installment come with something more than a facelift and remain by right among the best New Balance shoes. 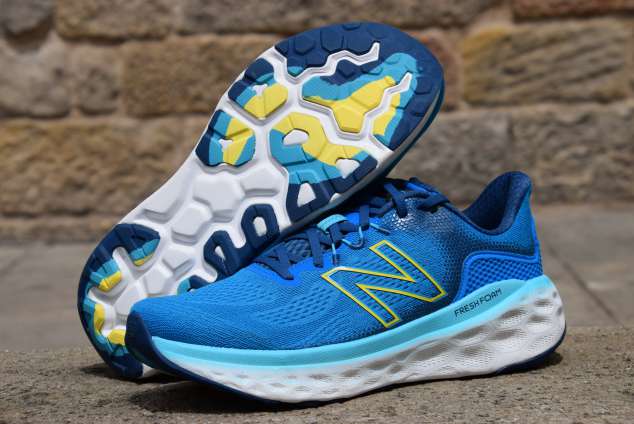 Another important fact is the weight, which has increased compared to its predecessor. Explain precisely all those changes and that include more and better padding, such as the bowl and other details that we will see now. In any case, a weight of 310gr in the men’s finish and 255gr in the women’s one, are within what is expected in a daily training shoe, and more if it is maximalist.

The important thing is that the profile of a shoe that provides soft and comfortable cushioning is still there, so it will be the best companion for all those training sessions where accumulating kilometers is necessary. Let’s go to see her! 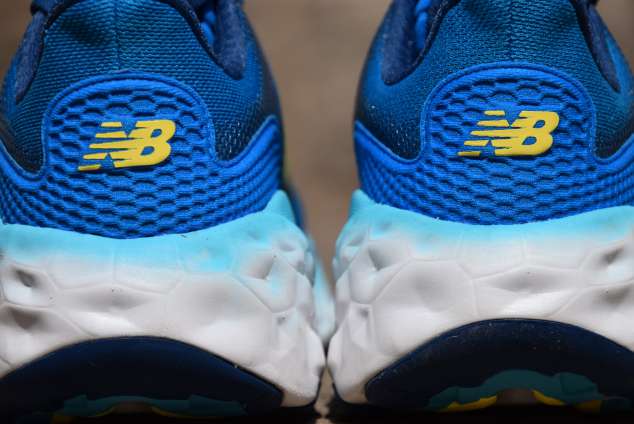 The New Balance Fresh Foam More v3 midsole is the heart of this model. At the time we already said that More meant seeing the largest midsole ever made by New Balance. The story is that, in addition, the material used is Fresh Foam X, a type of thermoplastic polymer with high performance, so it is built with a perfect compound to accumulate kilometers in a comfortable way. 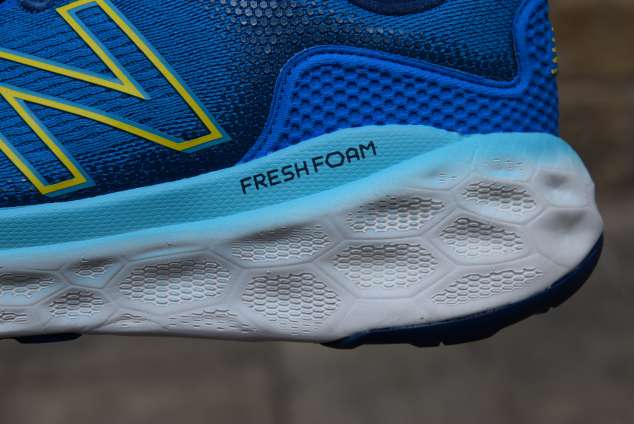 The drawing that can be seen on the sides of this More v3 is laser drawn. Actually, it is the entire cut of the midsole that is made by laser, to find maximum precision and not just the reliefs on the sides. And it is that all the footprint study work carried out by New Balance in its Boston laboratory turns it into a midsole that, with a single material (Fresh Foam X), is capable of providing what other brands need to achieve with elements and materials. different from each other: cushioning, stability, lightness, flexibility and response, as well as durability. 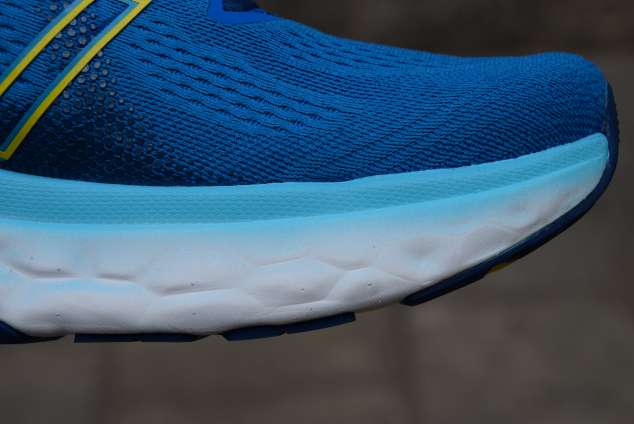 The entire midsole is very generous in terms of thickness. The profile is high too, logical if it is a shoe with maximum cushioning and protection. Like its predecessor, it goes up to 30mm in the heel area and up to 26mm in the forefoot (the front is higher than some rear on other models!). What is low is the drop, or the height difference that results from subtracting 26mm from the front to the 30mm from the back, and which is 4mm. 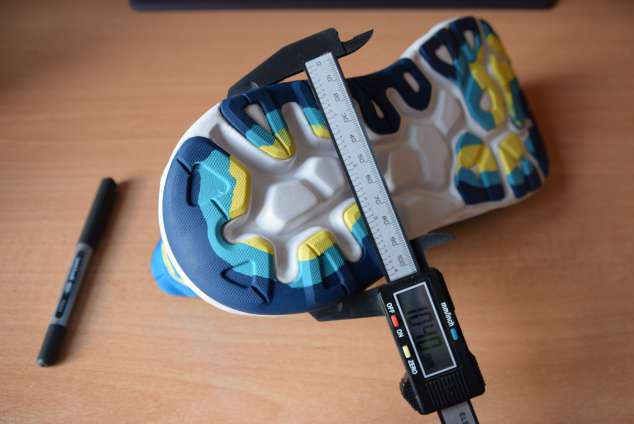 Before I have talked about the weight, which increased a little compared to the previous More v2 finish, the main explanation must be found here, in the midsole since having a wider last, it is also noticeable in the amount of cushioned material. If we take the heel as an example, the More v3 midsole has 10.4 cm at its widest point, while the More v2 was 9.7 cm. Something similar happens in the goal area, which in the end translates into more volume of material. 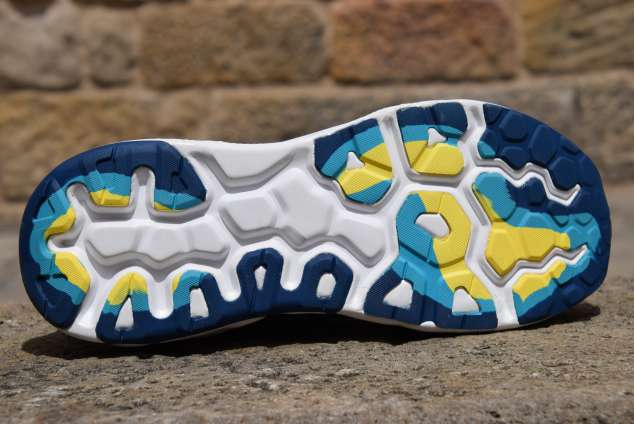 The New Balance Fresh Foam More v3 sole is another part of the shoe that has changed … and quite a bit. Now you can see a much more marked tack, much more incisive. More similar to a classic sole, and with which New Balance has sought to improve traction and durability. 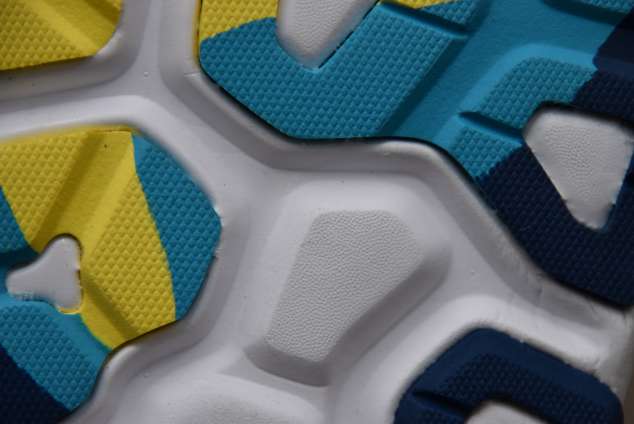 The point is that there is a lot of contact surface for this material. Of course, it is testimonial that in a small area on the outer edge and what would be the central area, it is the material of the midsole itself that is in contact with the ground (to help reduce the overall weight of the shoe). For the rest (heel, metatarsals and toecap, the sole is more than enough).

Thus, some large studs with irregular shapes distribute the pressure and contact over the entire surface, making it also have a large base of support, which gives it extra stability. 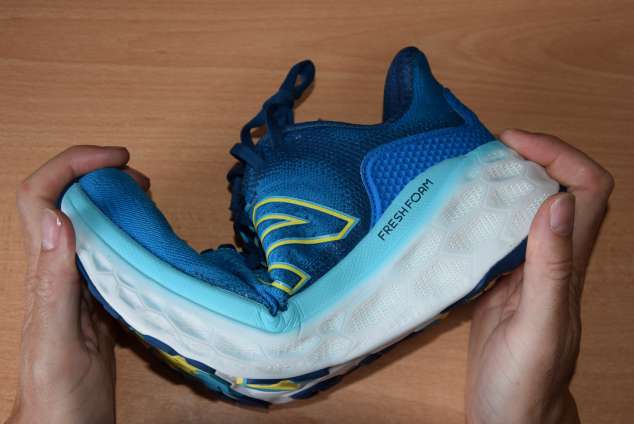 Other elements that attract the attention of More v3 are the large grooves that separate what would be the islands of tacos. These grooves double as flex stripes to facilitate just that: flexibility. And is that if a sole is thick, it will cost more to bend than a thin one, and that is where New Balance has seen clear that just a few separations between studs are not enough: they are one of the largest flex grooves I have seen. , so, without a doubt, the objective is clear. In fact, I squeeze it with my hands and it is not difficult for me to bend it. 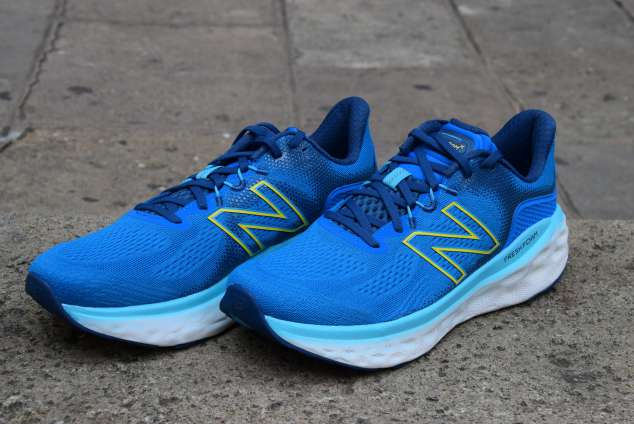 The upper cut of New Balance Fresh Foam v3 stands out for being much more comfortable than its predecessor. There it has been noticed that the American brand has gotten its hands on it. But not only that, the last has widened it. We already had clues, seeing that the midsole had “grown” not high, but wide. Well, where New Balance has wanted to make the clearest improvements has been in the fit and comfort. 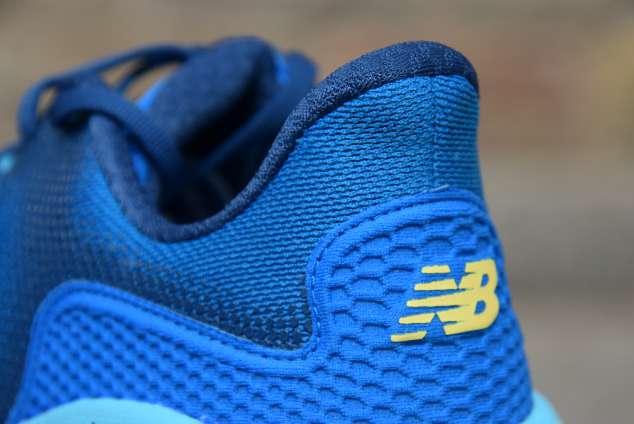 The fit wanted it to be adequate, but much more comfortable than v2. If before the inner lining of the cup was functional but austere, now it continues to fit well on the foot, but the type of padding has changed radically. It is largely changed to improve the fit over the Achilles heel. In fact, it has returned to the classic in a daily training running shoe: a fabric that is very soft to the touch, and filled with a padded foam that is ultimately responsible for that sensation of comfort in the upper. That inner lining changes when you leave the shaft and reach the instep, becoming a finer one, but at the same time, even softer. 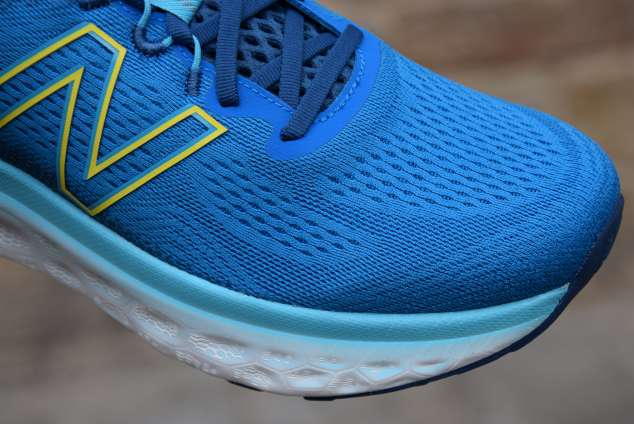 Going back to the top, the mesh that covers Fresh Foam More v3 is now thinner and more breathable. Logically it is more open and ventilated in the area of ​​the fingers and both sides, leaving the entire bowl as the most forceful part in terms of support.

The insole surprised me when I took it out because it is only 4mm thick. Let’s see … that’s fine, but I was expecting more … until I saw the footbed (the piece between the insole and the midsole) as it is a very soft spongy material. If normally such a material is usually 2mm, it gives me the feeling (because I can’t measure it, that it is glued and sewn) that here it is 3mm. That, together with the insole, already adds 7mm of spongy touch for the foot, which adds to the Fresh Foam X of the midsole … maximum comfort! 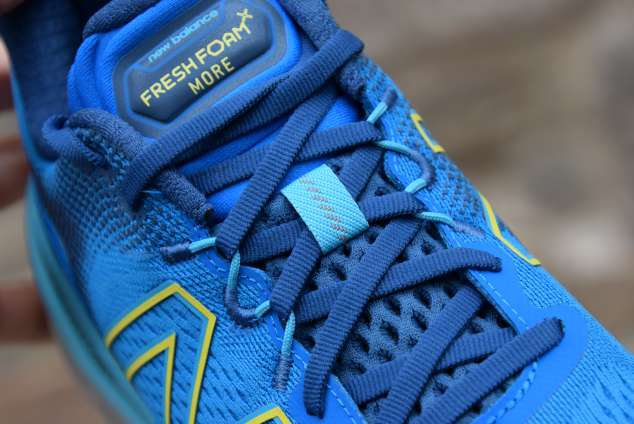 The tongue is also padded and has ventilation holes on its lower part. Above it, some flat laces (and that, without being elastic, do have a certain play), are passed through six eyelets. Well, between buttonholes and threads that act as buttonholes, leaving a seventh free in the ankle area. 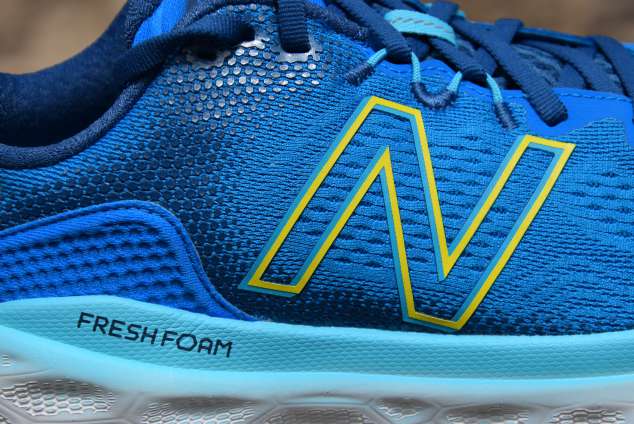 To increase support, there are reinforcements in TPU. They are tiny inserts, but very numerous, and only a few millimeters in diameter. They take the external part of the ankle and on the internal they are more numerous, also covering the entire area of ​​the plantar arch. 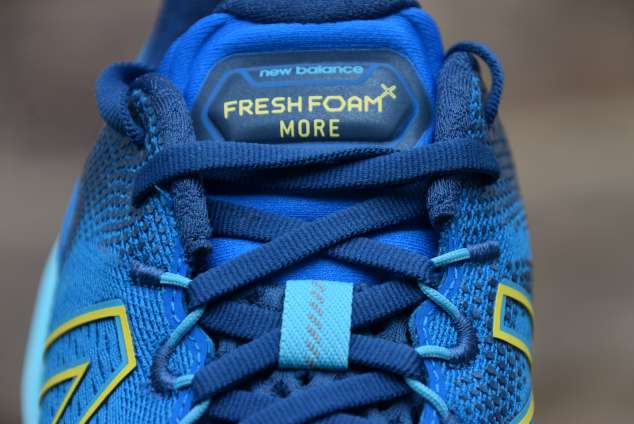 Finishing the upper, I was struck negatively not having seen any reflective elements (how useful they are), but my fault, because I was looking for them in the heel and they are in the front area. Specifically at the top of the tongue (the little sign with the name of the shoe) and also on the strip where the laces are passed and which is so useful since it does not allow this piece of the shoe to slide. In other words, this piece has a double function. 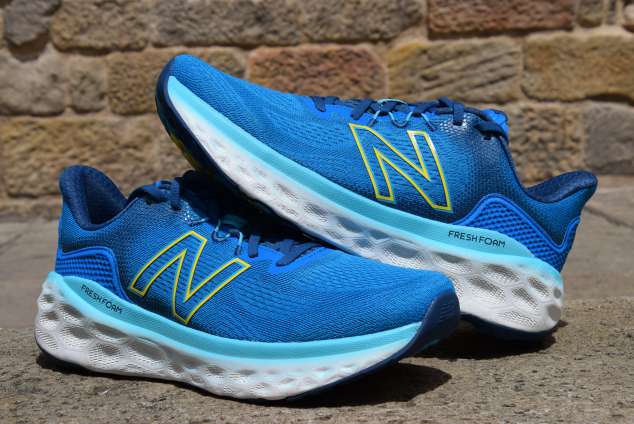 New Balance Fresh Foam More v3 is a maximum cushioning daily training shoe. In addition, the level of comfort in this shoe is very high, not only due to the cushioning itself but also with an upper made of soft and comfortable materials, but functional.

The last is wide and is indicated for all types of runners and runners, although those who will really appreciate it are those who need that generous cushioning and especially if they have problems finding shoes that fit the foot well. You will also go fancy if you are heavy or very tall. The mesh that surrounds More v3 is very soft and comfortable, as well as breathable.

The midsole material is Fresh Foam X, a thermoplastic polymer capable of returning a soft and progressive damping, but also responsive. The great height (30 / 26mm) of the midsole does not lead to a great drop, since it is at 4mm. Underneath, on the sole, Blown Rubber type rubber is used, with high adhesion properties and very good on hard surfaces such as asphalt (although it will also work well on dirt).

With its 310 grams for men and 255 grams for women, it is going to be a sneaker. ideal for traveling long distances, thanks to its comfort and cushioning. Also for training of all kinds, but especially during filming. And although it is not a shoe designed for competition, those who run at rates that are not exactly like that of the winners, will still enjoy it, especially if the race is a half marathon or marathon, for its comfort.

And since this shoe has a clearly asphalt vocation, for those who like to run in the mountains with maximum cushioning, New Balance took out a version exclusively for trail: Fresh Foam More Trail. 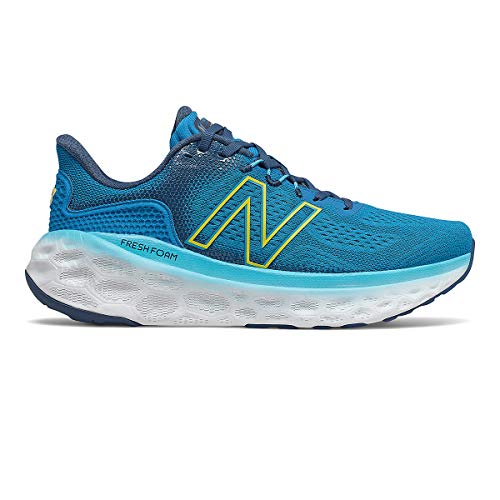 no rating based on 0 vote