We have the analysis and characteristics of New Balance Fresh Foam More, a new model that comes breaking barriers. The first ones, those of the American brand itself, since I had never before conceived a model of characteristics of maximum cushioning: volume in the midsole combined with a very low drop.

Neither New Balance had used a midsole with two different compounds of such unequal hardness in a roll shoe, that one of them served as a sole. 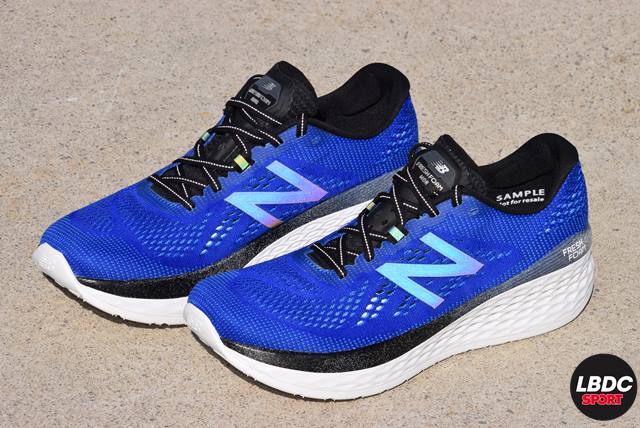 Fresh Foam More is a great novelty that will be appreciated by those who look for the maximum cushioning and that it combines, in addition to a drop of just 4mm.

Let's see what New Balance has surprised us with this time, although I have already said that one of the surprises is the low weight: 292g of theirs and 231g of theirs.

The New Balance Fresh Foam More midsole is what gives this shoe personality. Without giving up the lightness, the cushioning is maximum. The Bostonians have also sought that it be smooth. 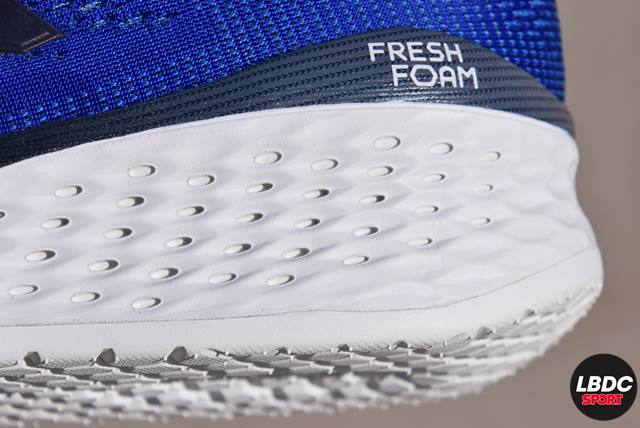 For this New Balance is based on two main concepts: the use of two different compounds such as Fresh Foam and Ground Contact EVA and the volume of these two materials used in the midsole.

The main part, and the one closest to the foot is Fresh Foam. It is easy to distinguish in the photos because it has two types of reliefs that I will explain later: holes in the outer face of the midsole and hexagonal cells in the interior.

Fresh Foam is a cushioned material modeled by laser that this time varies the position of the foot due to a drop (the difference in height between the heel and the metatarsal area) of 4mm. It's cushioned, but New Balance has wanted it to be extra smooth, thanks to a hardness rating of 48C.

The other material, Ground Contact EVA, has a hardness rating of 57C and is located under the Fresh Foam. It is the case that, thanks to its hardness and resistance, it also works as a sole. In the photos it is difficult to distinguish both compounds because they have the same white color, although you only need to touch them to appreciate the difference. In addition, the part in contact with the ground, New Balance has molded it with the waffle design typical of running shoes, for better traction.

The height of the midsole, is unprecedented in the American brand. The elevation of the inside of the heel with respect to the ground is 30mm, while the forefoot is 26mm (hence the 4mm drop). Someone could say that in the photos, or if you have it in your hands, the height is much higher than those 30mm. In fact, I have measured the highest part of the midsole and it is 63mm (see photo). This is deceptive, because in reality, the laterals, as in most models, rise more but only by the "facade."

Making the midsole higher on the outside than on the inside is a resource that comes from afar and what is intended is that the foot is fitted so that it does not move (I would compare it with the seat of a competition car, that when you sit down, you are embedded in it, so that you do not move a millimeter despite the numerous forces that pull your body in one direction or another). This resource is Unique Topline and is responsible for the foot has a stable support in terms of movement. In Fresh Foam More is that strip of material, between black and gray, that runs around the contour of the shoe between the midsole and the upper.

The flexibility of Feesh Foam More is altered by the very construction of the midsole, an effect purposely sought by New Balance, for a soft cushioning but not excessively flexible.

Finally, I have to explain what the holes and the hexagonal figures of the midsole: The holes, on the outer side, favor that the material deforms better when the foot hits the ground, since it usually does it for this place and thus the cushioning is carried out progressively. On the other hand, the inner face, which acts a fraction of a second later, is the one that receives the fall with the full weight of the body, precisely at the moment of rotating the ankle. Here the hexagonal shapes, a little convex, will help in the stability of the footprint. In addition, an aspect to stand out of the distribution of the Ground Contact is that just for the inner face is where there is something more of this material more firm.

The sole of New Balance Fresh Foam More has been partly revealed in the previous section, although there are still aspects to be explained. The Ground Contact material of the midsole is in direct contact with the ground. This brings a degree more than softness when running that if the contact material was a simple solid rubber.

There is a but. And it's the durability depending on where we use this Fresh Foam More. If we use it on hard surfaces such as asphalt and, in general, urban environments, the material will have an acceptable durability. On the other hand, if we use it by land, although it will work well, as the earth is more abrasive, here Ground Contact will suffer more, although only in terms of durability, not performance. 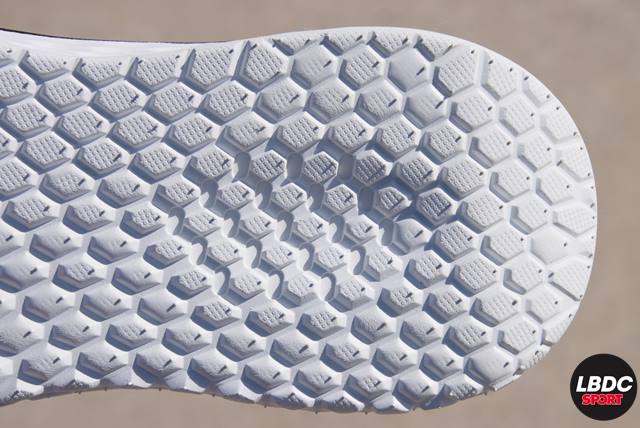 The design of the sole shows two differentiated zones. On the one hand the front has larger studs in the drive zone. This is so to have more contact surface in the place where you have to pull to throw the stride. Behind the heels are smaller and show a slight indentation just below the heel. The function is Help the midsole to deform by improving the cushioning and by shedding a few grams.

Speaking of grams, Ground Contact is lighter than solid rubber, so it also collaborates in the low final weight of this More.

The New Balance Fresh Foam More upper features a double Jacquard mesh that, under a seemingly simple look, hides everything necessary for a correct breathability and support.

The entire contour of the shoe is built without seams. What makes the grip is controlled are, above all, the frames that use more thread so that the mesh is reinforced in certain points. However, inside the closure is semi-booty since the tongue is caught to two side straps that, in turn, are inserted into the base of the midsole helping to hold even better in the area where it is most needed. To help locate those girths, say that they match the big "N" symbol of the brand. Since that "N" comes up, to say that, even having a dark tone, it is reflective.

The tip of Fresh Foam More, despite having a greater thread pattern, New Blance adds a simple interior reinforcement to protect the fingers and that they do not easily pierce this area. Here the holes are wide, but not as much as in both sides, where the ventilation is very guaranteed with matching openings in the two mesh layers.

The laces are flat and not very long. They are not passed through the tongue because they do not need to be held (the two inner straps already do). 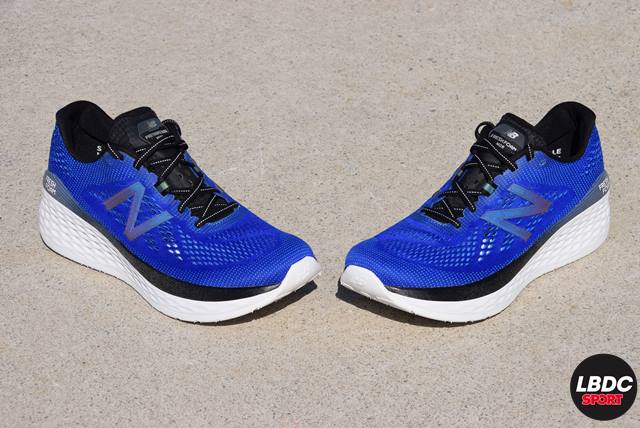 In the heel works the Molded Heel Foxing piece, which continues to be a buttress with the shape of the heel that will give it support, especially at the moment of hitting the ground.

To top off the theme of comfort, to a foot bed (the place where the foot rests, just above the midsole) of foam, we must add a padded and generous in thickness: 6mm.

New Balance Fresh Foam More makes good the motto with which the American brand presents it: Made soft to work hard… No more no less. If you have manufactured a model with an unprecedented midsole height in this centennial brand, it is because they are clear about what they are looking for: the model with the highest level of cushioning that New Balance has ever built.

Those who use or have used Hoka models such as Clifton or Bondi, and even Altra as Paradigm, will be able to go through all the guarantees to this amazing New Balance Fresh Foam More. Sometimes it seems that they have to choose between a few models. Well, one like this More, has come to open more possibilities since it is a model that is going to fight face to face with them.

It is a daily training shoe, but due to its characteristics it does not clash in races, especially long distance ones. The rhythms to be used would be the most suitable for training based on filming, 4'20 "-4'30", up without limit of rolling quietly.

Due to its high degree of cushioning and the careful stability it will be possible to use runners and runners of all types of weights, even those of greater weight, although perhaps you may end up missing stronger reinforcements in the upper for this last case. And in general, all those who seek maximum cushioning.

The weight is really surprising for all these characteristics since it stays in only 292gr in the man's finish and 231gr in the woman's.

The official price of New Balance Fresh Foam More is € 150.