Analyzing the characteristics in depth, it must be said that, with FuelCell TC, New Balance has released another beast from the asphalt again. Why qualify a shoe that is not strictly competitive or pure flying? Because it has characteristics that are only available to those that are designed to run very fast: a very careful cushioning, which hides a carbon fiber plate to increase certain benefits, and a general configuration typical of the shoes that intend to go very fast and for many kilometers.

And because it is not only focused on being used in races. No way! This FuelCell TC can be a very good tool even for pre-preparation, whether they are finally used in the race, or if that day we have some other ace up our sleeve, for example the FuelCell Elite itself. But TC is that: Training & Competition (Training and Competition). With that acronym, it is impossible for New Balance to further synthesize the leitmotif of this superb model. 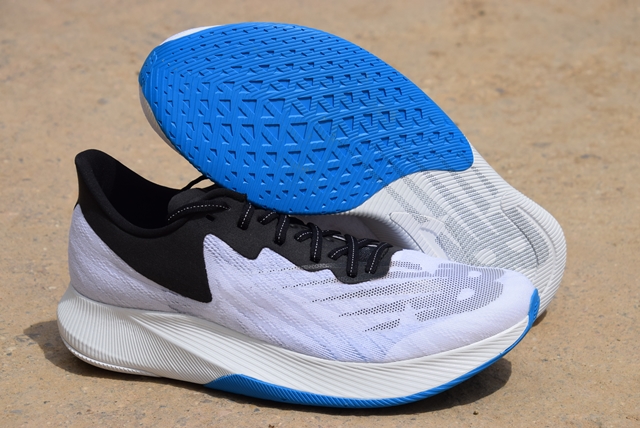 FuelCell payroll begins to matter. After the irruption last year of models such as FuelCell 5280, in New York (with LBDC as witness), FuelCell Propel, FuelCell Rebel, or FuelCell Echo, others such as FuelCell 890, or this same TC are already a reality. In February we warned of the landing of the new FuelCell with carbon plates, but they are already here and we have already messed them up. One never tires of saying it: brutal New Balance's ability to bring out new models with real innovations and to see a clear performance, each on his own plot.

Returning to this FuelCell TC with a clear and concise data is the weight, of just 263gr in the men's finish and 206gr in the women's one. Very light for a day-to-day shoe, not so much for a competition exclusive ... and that's where this extraordinary shoe will move comfortably: it will be able to help us in training and capable of helping us in competitions.

Do we see all the details?

The New Balance FuelCell TC midsole is the star of the shoe. It is not that the sole or upper are not worked (which they are), it is that the foam with high energy return and the carbon plate inside to optimize performance are compelling reasons to rate it that way.

To start, use the same FuelCell compound as the one I defined at the time as “thoroughbred” which is the 5280 model. And what does it consist of? Well, for those who like to know the composition, it must be said that it is not a derivative of EVA that they are used to. No. It is a foam based on Thermoplastic Polyurethane (PU) elastomers that is injected with nitrogen under pressure so that the end result is a much more spongy and expandable compound.

In more understandable words: what we are talking about is a material that is damped, but with an extraordinary return (it returns part of the energy released when running) and reactive. If you add that it is also very light, we already have the holy grail of today for a midsole. 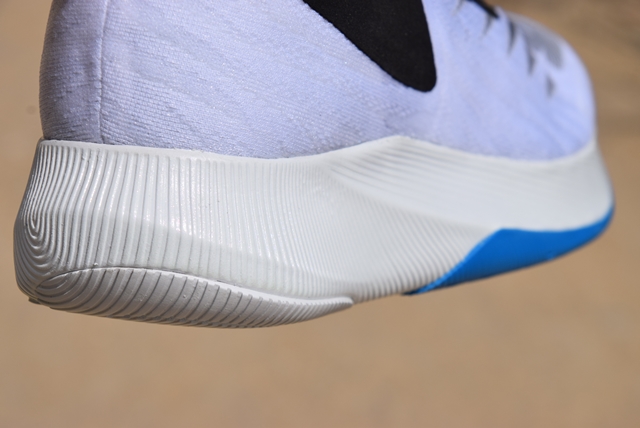 And is it enough? For New Balance it seems not, because they have also put a four layer carbon fiber plate to give the race even more momentum. It is full length and must favor the propulsion in the race of those who use these New Balance TC. 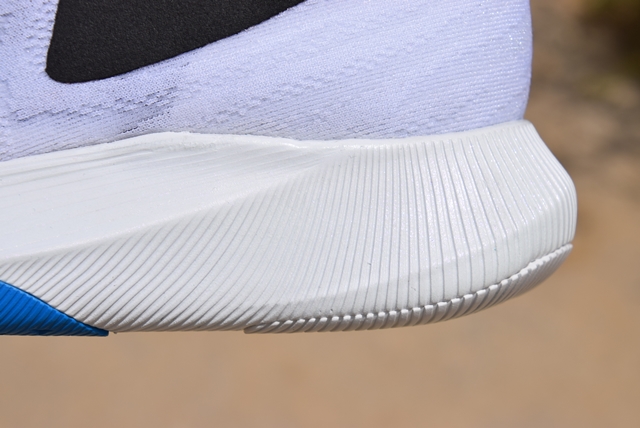 The amount of FuelCell material that wraps around that carbon plate is generous. We are talking about 30mm thick in the heel area and 20mm in the forefoot. This means that there is enough material for good comfort and cushioning, hence this shoe is a very good ally for large workloads, even with intensity, and of course in the race ... without setting limits on distances. At these heights, the resulting drop is 10mm, which is already in line with the model's versatility. 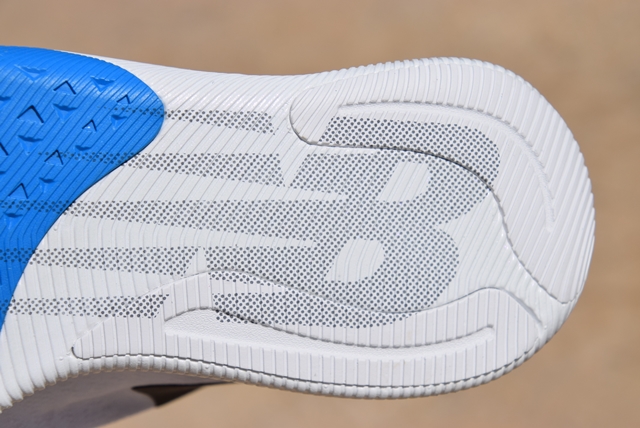 The New Balance TC sole, although at first glance may seem simple, of course it is not. You only have to look closely to see how the Boston team have solved issues such as grip or unnecessary weight saving.

For starters, I'm going to the heel. In the analyzed model, from a distance it is difficult to observe the change of materials, but for that we are, to explain it: Although the entire back half of the shoe is white (in the analyzed model), it must be said that there are two very different: rubber and FuelCell ... The midsole material, here? You are right.

To save weight, in areas where there is not excessive support, the rubber of the sole (heavier) has been taken up by the FuelCell of the midsole itself, which reaches this far, helping in the support, but in a light. For the areas of maximum wear (external part of the heel and inner face, up to the bridge), the American brand does deploy two large areas of abrasion resistant rubber. As I said, it is the heaviest material and therefore in the heel of New Balance TC is only in those two specific places. 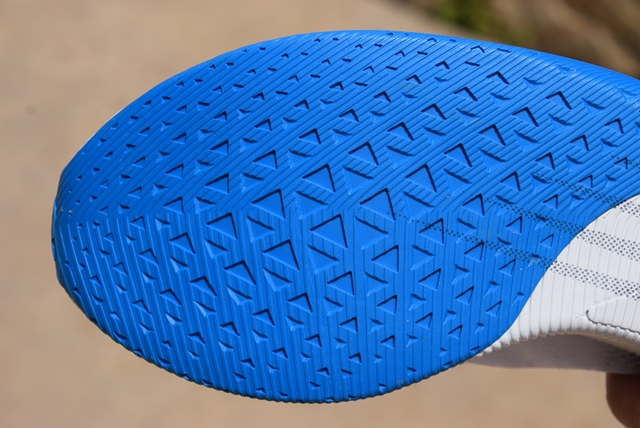 If we go to the front area, it starts in blue in the photos, yes rubber is used on the entire surface since everything that has to do with traction and adherence is going to be cooked here. The rubber itself is in charge of this second, while for traction, the designers enter the bag to weave a reverse taqueado. That is, instead of having a sole from which the cleats are born, here what New Balance has done in an ingenious way is to deploy an entire base of full support of the sole and on that basis, it has woven a whole tangle of grooves that will be responsible for pulling. 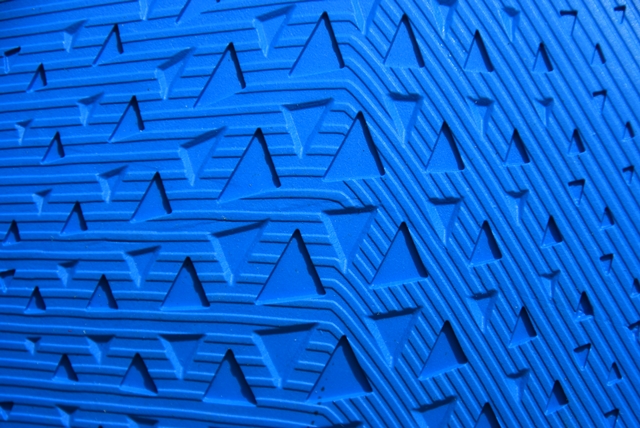 These indentations are triangular in shape allowing traction in all directions. These triangular gaps are not distributed in any way, obviouslyThey are small on both sides (reinforcing and providing durability) and larger just under the metatarsals, which is where the maximum pressure is really given when looking for traction and launching ourselves forward. 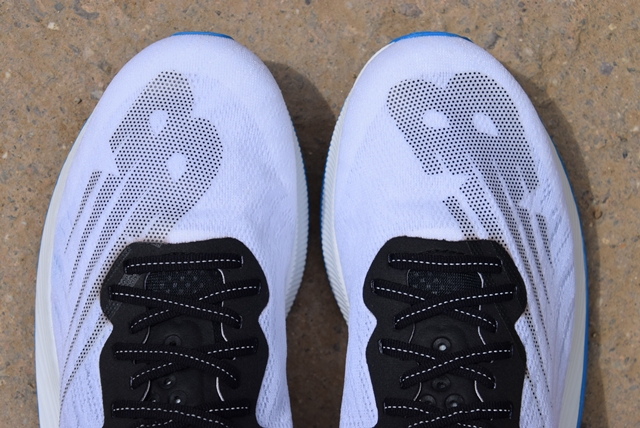 The New Balance TC upper is characterized by using a “Burnout” mesh that is extremely light and breathable. It is enough with introducing the fingers of the hands to verify that it is possible to see where you move them. That at the toe, precisely where the toes are lodged and where mobility, ventilation and breathability are most critical. 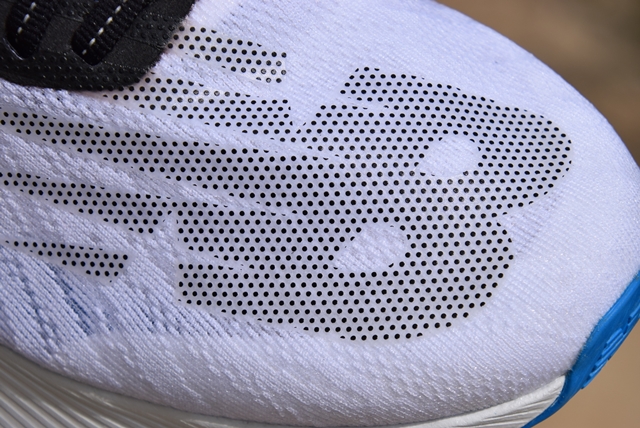 In the middle zone the mesh is somewhat stronger, although not much more. New Balance here renounces to put your logo with synthetic materials and thus use it as reinforcement ... No, to save weight (the fight is constant), the logo is hardly painted on the toe ... but with iridescent material, which does not save weight why be save on details. This film of iridescent material seeks to facilitate its visibility. 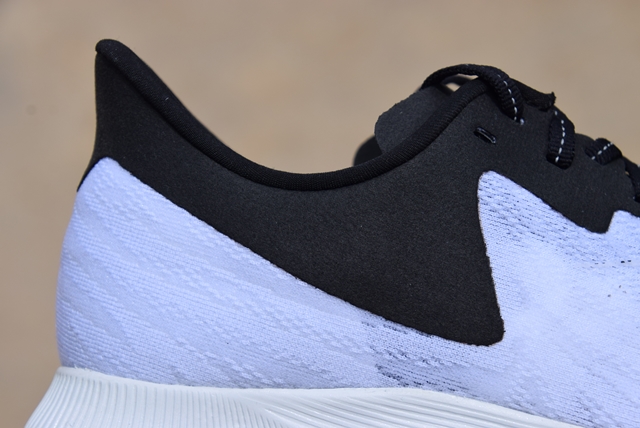 The heel has a buttress to help when hitting the ground, but without being very forceful. Here you have to sacrifice shields to flock more knives to the scale. This lightweight structure heel has an ergonomic shape and is crowned in such a way that it can be easily pulled off when putting on. 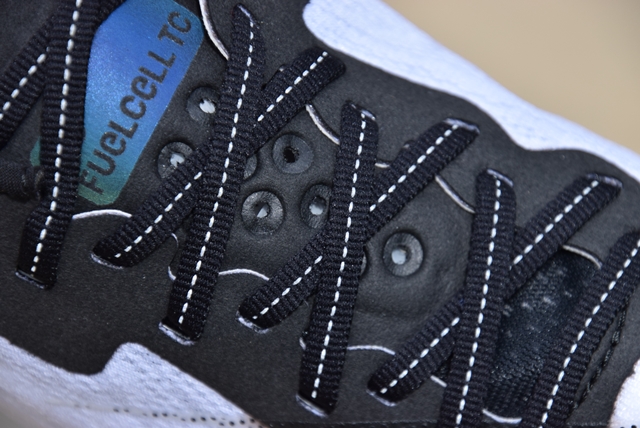 And turning that heel, there is the collar that closes around the ankle adjusting it comfortably thanks to the foam that is under the inner lining. Just ahead, a very thin tongue with holes that facilitate breathability, gives way to flat laces that, beware! they have a reflective thread sewn that runs 100% of the loop. They are passed through suede eyelets that give softness to the touch.

Underneath it all, the thin insole (3mm) rests on a foam footbed that separates it from the midsole. Total comfort. 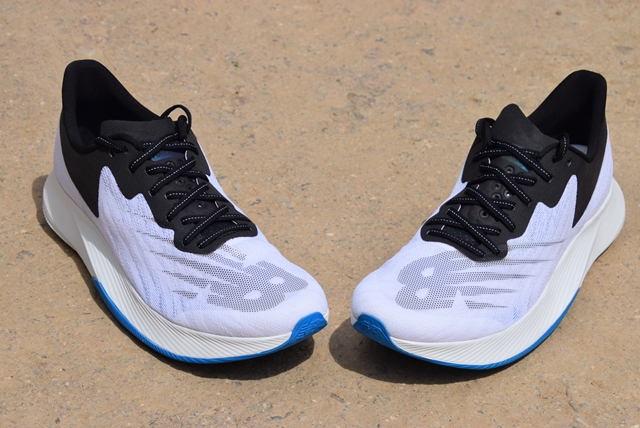 With New Balance TC I am (again) facing a model that has pleasantly surprised me. For the concept (training and competition) and execution, without leaving a single detail. A shoe to fully enter the New Balance's 10 best.

It is very difficult to find a but to this shoe. The only thing is that I have not seen a strip to pass the laces on the tongue, but I understand it because ventilation has prevailed with some holes, which prevent sewing at that point.

Well, it is a concept of shoe that I love because it is a tremendous solution for many people who You want a shoe that has most of these things: lightness, cushioning, reactivity, response, breathability, ... But, and here comes the grace: that you can use it both to train and to compete. In other words, those who only work with one shoe for everything, this one is luxurious.

Thanks to its thick midsole and the FuelCell material, it is not only indicated for low or medium weights, it could also be used by runners and runners with high weights, but always knowing that the upper protections are just the right way to be happy with rhythms. Another thing to keep in mind is that, although the last is normal, the upper closes snug on the foot, something logical when talking about shoes designed to go fast, which are usually tight. The mesh gives enough in the area of ​​the fingers so that they have freedom and ventilation. This means that whoever has a thick foot is going to be tight, and the thicker the foot, the more.

Of course, those who will make the most of it will be those who bet on that material of the midsole and its carbon fiber plate to go fast or very fast, more than they usually do (you have to work on it too, huh? that no shoe does the job alone). In this sense, the ideal would be to use them in training sessions where work is being done to improve and consolidate the pace of the race. In competition, obviously as much as possible, although it must be said that the faster one is, the more it justifies the investment, which is the part that comes now.

The official price of the New Balance FuelCell TC is € 200.