Nike Air Zoom Pegasus 36 Trail supposes the return of the version trailera of one of the most iconic sneakers in the world of running. If Nike Air Zoom Pegasus is in the top of best selling training shoes in history is normal to be known even by those who have not worn.

Another issue is its version "Trail", which has only appeared on a few occasions and that has consisted mainly in replacing the polyvalent sole, but mainly asphalt, on the other with more accented heels, and those of the heel, in contragrip.

This does not seem to be what happens at Pegasus 36 Trail. First, because she invests the papers and arrives earlier at the market than her sister roadrunning; and second, because this could be the first time that the Trail version was something more different than just the sole. And it is that, in the absence of knowing the new Pegasus "roadrunnera", this Trail already comes from the factory with a legend screenprinted in the foam of the midsole clearly indicating his intentions: "Engineered to the exact specifics of Trail running"

Something happens to those in Oregon, because the catalog of Nike shoes, begins to have ramifications in their own models, as evidenced by the existence of the Nike Zoom Pegasus Turbo version, a version of Pegasus that we described as "nervous" for its clear approach to competition, but without getting to the category of flying shoes, that is already another story.

Let's go with a brushstroke of how is this Nike Pegasus 36 Trail. 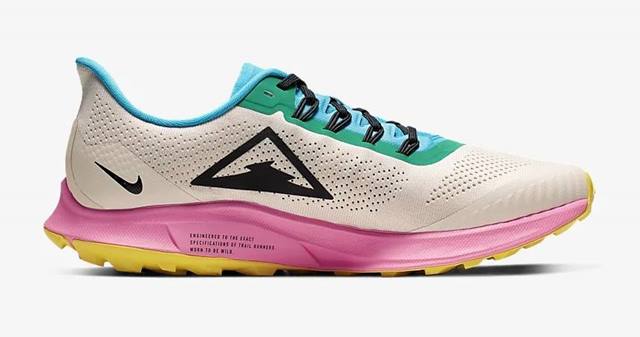 The Nike Air Zoom Pegasus 36 Trail midsole is built mainly with Cushlon material, typical of the American brand. This is a compound capable of providing a soft and progressive cushioning, besides having the ability to stretch these characteristics over time, more than other materials.

Inside this Cushlon material, Nike has located two units of Zoom air: one in the heel and another under the metatarsals. This system of cushioning will make the impacts even less damaging, in addition to the high compression to which these capsules are closed, providing a good rebound capacity. 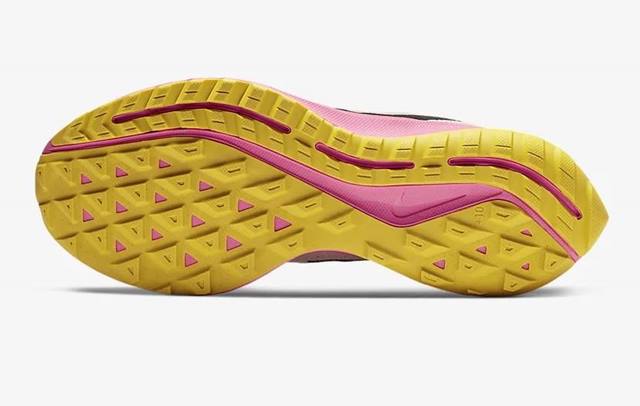 The sole of Nike Air Zoom Pegasus 36 Trail follows the main pattern of Pegasus 35: A stylized and stretched shape, pointed in the heel and more rounded in the toe. As in that, the longitudinal line that runs the shoe from heel to toe and that serves to guide the tread during the transition, also divides the shoe into two clear halves.

The inner face, where we perform the most important support, both in the fall and preparing the exit, is where the largest and incisive tacos are concentrated. On the other hand, on the outside, we found some taco rails, more oriented to the traction in the front and more standards in the rear.

That the studs are so close to the Cushlon material will allow them to adapt perfectly to undulating or pointed surfaces, such as rocks, reducing the effect of the edges on the fly. 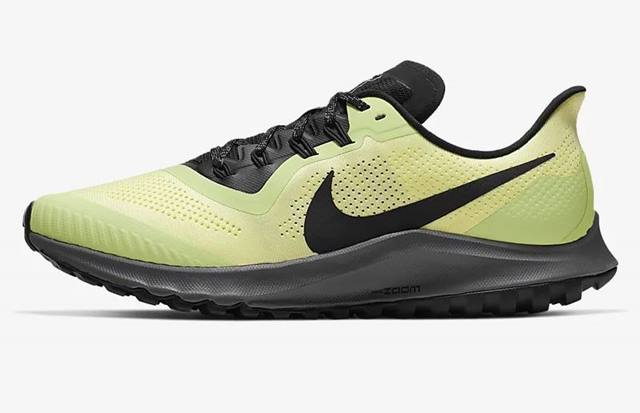 The upper of Nike Air Zoom Pegasus 36 Trail is characterized by a very smooth appearance in its lines. Band colors, thermosealed reinforcements contribute to not having an aggressive packaging in sight. In any case, the mesh is perforated by hundreds of holes, especially in the area of ​​the fingers and midfoot, for proper ventilation.

There are only eyelets as such on the highest part of Pegasus 36 Trail, where the laces are knotted. This is precisely because the laces are passed by a few strips of Flywire that make buttonholes at the same time.

The idea is simple, the construction not so much and the visibility very reduced or disguised. By parts: The idea is that the Flywire threads, of exceptional strength, are inserted into the base of the midsole and when tightening the laces hold the foot in all phases of the tread.

The construction itself is to insert the tips of these threads in the midsole and make a twist in the area of ​​the laces, so that they act as eyelets and the laces are passed through there. Precisely when pulling the laces when knotting them, they stretch the Flywire that closes on the foot, keeping it secure.

Reduced visibility is not so much an aesthetic question as practical. If Nike likes to put Flywire laces on the outside to make them look, here you have no choice but to put them on the inside because otherwise they would be hooking on all kinds of branches and bushes. Come on, I would not buy shoes for Trail Running with the possibility of getting hooked on anything I approached. 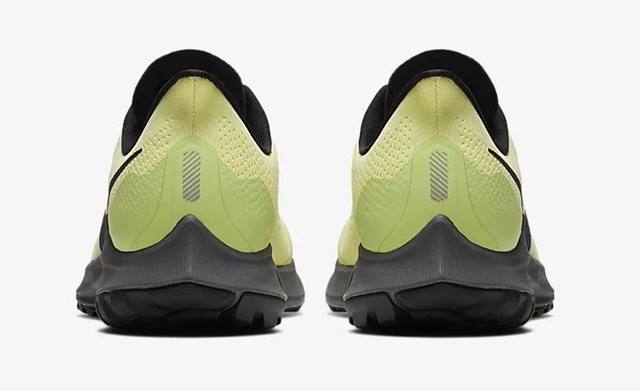 Completing outstanding features of the upper cut, say that the laces are passed through the tongue so that it does not move and that, although it is not very forceful, in the heel area there is a buttress to contain the ankle when it hits the ground at run.

Nike Air Zoom Pegasus 36 Trail is the return to the mountains of one of the most iconic running shoes in the history of running. And what does that mean? Well in a softly cushioned shoe, with an upper that takes care of comfort and that focuses on Trail running to get the best performance in the forest and in the bush.

Pegasus 36 Trail is a suitable shoe for those who want Assaulting roads without too much technical complication, or places in excess difficult, and where the upper can pass without having to scrub against external elements. The softness and lightness is sometimes at odds with the shields, so a higher level of protection in the upper is perhaps what this Pegasus 36 Trail is missing for harsher environments.

It is not a radical sole, so in mixed terrain, or if we have to resort to invading the asphalt, either to enter or leave the mountain or changing territory, it will not be inconvenient.

In exchange for all this, Pegasus 36 Trail is a shoe that for easy terrains or very corribles (if I may express myself), it will be a good ally. This is more evident if the percentage of track in the route or race is high, thanks to its own configuration and a weight below 300gr.