We analyze the characteristics of Saucony Kinvara 10. If a shoe reaches its tenth edition is that it really has followers and loyal that make it worthwhile for the brand to continue evolving and revolutionizing the market.

Exactly what happens with this Kinvara 10, a shoe with a technological evolution and design. Created in 2010 and had its original name, Cinn Mhara, to pay tribute to the Irish established in Massachusetts.

The Kinvara were the pioneers of the design of natural running, but with the intention of being able to hold not only light weights. Speaking of pesos, his is 221gr in the male model and 190gr in the female model.

In this tenth installment it is presented with a EVERUN topsole and a flexible EVA + midsole for a smooth and incredibly energetic driving. The upper part of the high engineering mesh gives you both support and breathability and comfortably blocks the foot as you increase the pace.

Kinvara 10 with a design that reminds us a lot of the originals, plus an adjustment fixed plane thanks to the Pro-Lock lacing system, which offers a feeling of maximum freedom with a great fit in the midfoot area; a strong and fast running, and one great feeling under the feet. 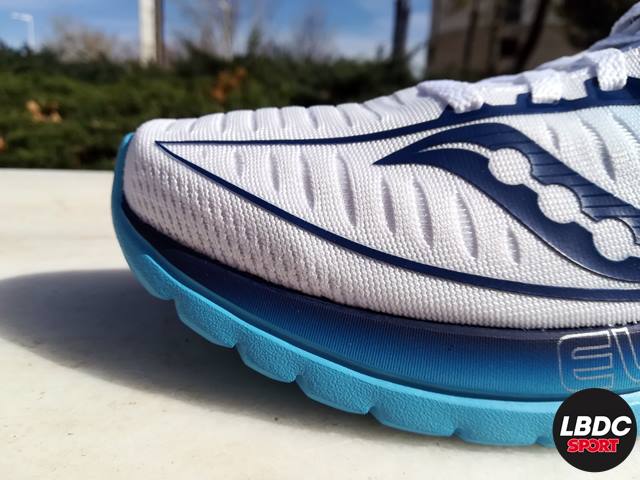 From the upper of Saucony Kinvara 10 it can be said that it is completely a tribute to the original Kinvara in terms of design. Of course, without too many frills in terms of colors.

This upper cut is designed with Engineered Mesh double layer, with large ventilation openings, and with technology FlexFilm: a very flexible and breathable upper layer that protects the foot and helps stabilize the stride.

The lines are very sober, with just 4 heat-sealed strips to give some structure to the upper. It has a tip with very thin inner reinforcement, which is hardly appreciated.

In the midfoot, the laces are flat and pass between eyelets also open planes in the same upper mesh. The tongue is very thin on the sides and more padded in the center. It is attached to the upper by a small membrane that will not allow it to move. 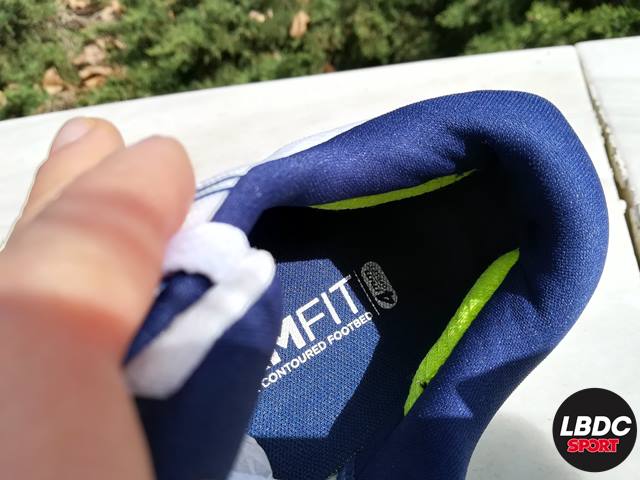 In the heel part, as usual in the brand, we see a good padding to adjust while giving comfort to this area of ​​the foot.

It incorporates a novelty, fluorescent parts located just below the malleolus. It consists of two quilted pieces with a rough pattern to give greater support and stability to the heel. 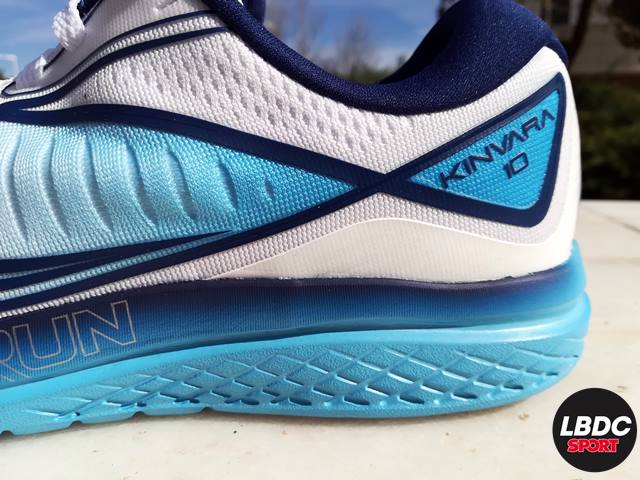 The first layer of the midsole of Kinvara 10 is from EVERUN ™ topsole, those balls of thermoplastic polyurethane that we can see inside the shoe. This topsole layer positions the best cushioning material closer to the foot, achieving a smoother combination on landing with reduced pressure at the forefoot. It offers runners and runners a more flexible and durable cushioning, with a more vivid feeling in each step.

On the other hand, the midsole itself, under the Everun, we find the EVA + compound that maximizes the rebound and durability by minimizing weight. It also gives flexibility and lightness. All this translates into a very pleasant touch. 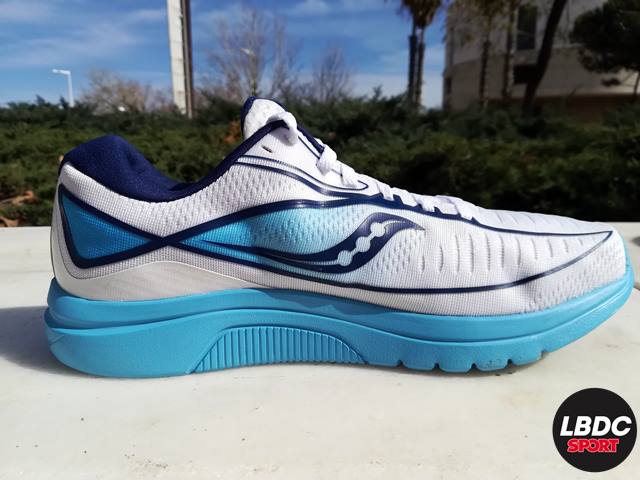 As for the heels of the midsole, say that the heel goes up to 23mm, while the front measures 19mm. Therefore, the Kinvara 10 have a 4mm drop, being thus faithful to his natural running philosophy.

A medium width last and a template with 4mm Formfit technology. This finite insole, together with the midsole and Topsole make the Kinvara 10 have that concave shape, enveloping the heel and foot, to give more stability in the tread. 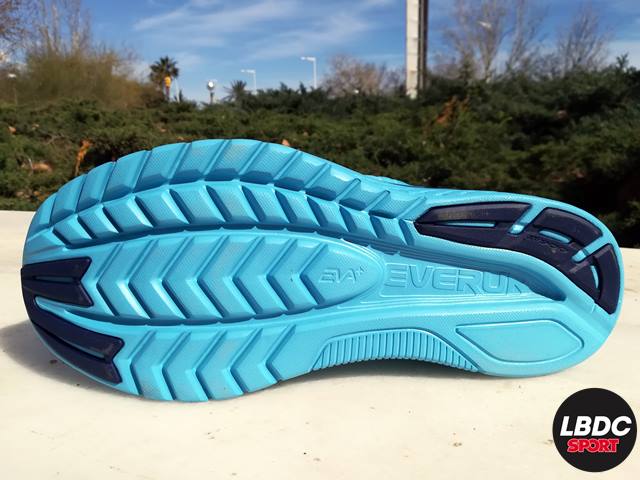 The sole of Saucony Kinvara 10 stands out for its design TRI-FLEX and the use of EVA + in the open, with small reinforcements using the material XT-900.

On the one hand we have the TRI-FLEX design that works with the upper EVA + midsole for greater dispersion of force over a larger surface area, while offering optimal flexibility and traction. We see perfectly three lines marked in the direction of the footprint. In each one of them a pyramid design is used to favor the grip and with the grooves between the triangles. In addition, it also facilitates the flexion during the tread. 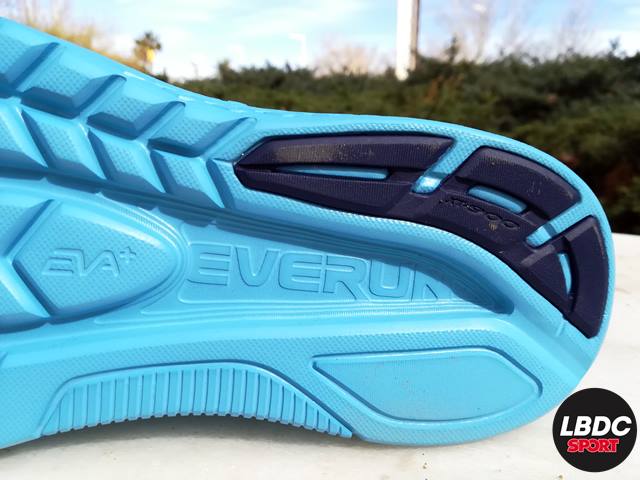 At the base of the big toe, Saucony inserts a special piece, since being the last place where there is contact with the ground during the drive phase, it will improve the grip until the last moment of touching it. In the same way it does it in the heel, placing a piece strategically: right in the first point of support for the heels (most runners enter the heel, that is, they touch the ground first with the heel, while running).

The material used for the reinforcements mentioned above is the XT-900, it is a "Premium" carbon rubber that offers exceptional traction and long wear durability.

In short, it incorporates a very flexible sole to allow greater freedom of movement.

When it came to trying the Kinvara 10 I had a very positive feeling. At first glance, still and knowing the weight, I thought they would be heavier but, on the contrary, they are very light, giving a feeling of freedom in the foot.

Running with them I have noticed a lot of comfort in the upper, hugging the foot well, although for my taste the part of the fingers is a little loose (certainly I have a pretty thin foot). It has a very soft mesh, without friction points or rubbing, and with a positive ventilation in positive. In short, you feel the subject foot, but without tensions.

The only thing about the upper that I just can not find the justification for is the incorporation of the extra cushioning pieces in the neck part of the heel. It's not that they bother, but I'm not sure they're necessary either.

As for the cushioning, we may notice it a bit harder than we are used to. It is not a negative point, it is simply that the sole of the foot is even more rigid and having three different systems of cushioning.

Yes it will be a positive point in the fast rhythms, as I will tell you next.

I've done training with the Kinvara 10 on asphalt and on the ground. For my taste, on asphalt they have a excellent response, with very good transition and feel the flexibility in the tip of the foot, just in the exit of the support, giving a very good response feeling.

On the other hand, on land, they also have good response, but with the small inconvenience of staying some pebbles between the grooves of the sole that can disturb a little in the support.

As for the sole, it has a good grip on dry surface, and decreases a bit on wet soil, possibly due to the lack of more rubber areas. Precisely for the same reason, the lack of more surface with rubber makes the durability of the shoe is not going to be its strong point.

If we analyze the rhythms, in my opinion, when I have tried them at rates from 3'50 "to 4'30" km, it is when I received the best response. It has a good start thanks to the Everun, and the rigidity that I mentioned before.

For these reasons I would recommend them for Quality training or 10k competitions, half and even marathons for the lightest. Especially for runners of weights less than 75km.

If you are one of those who run with a good technique, with half-foot support or with natural running, this is an ideal shoe to combine with another that has more cushioning for long runs at lower rates, such as the Saucony Ride ISO.

Saucony Kinvara 10, weighing 221gr in men and 190gr in women, is a sneaker versatile that serves both for rapid training (series, fartleks, tests ...) and competition. It is more focused for an audience with a good running technique, taking into account the low drop (4mm), but if you are one of those who can use them for quality training, where usually you usually pick up your foot and make a slight improvement in support.

For runners and runners with neutral tread or seedling and up to average weights.