Amino acids are the main constituent of all proteins. One of the main functions of proteins is the growth and repair of muscle tissue (anabolism). 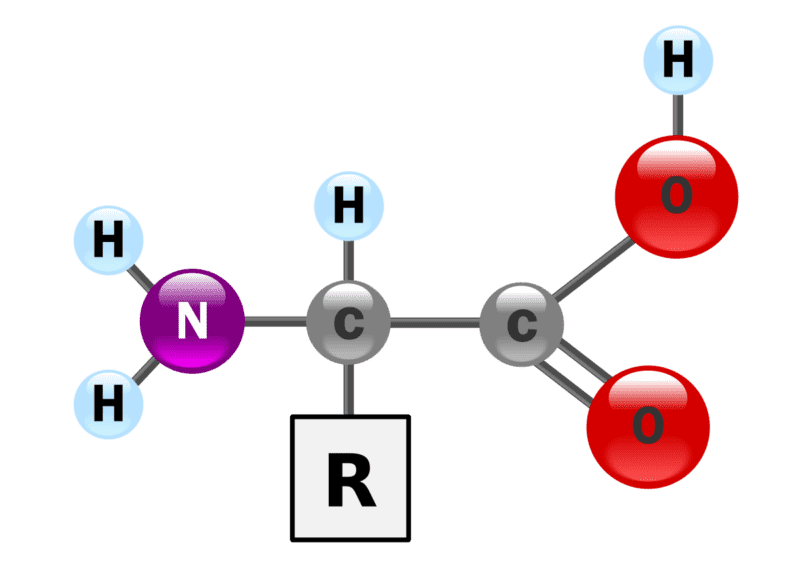 The basics of amino acid metabolism in the body

Amino acids are the main constituent of all proteins. One of the main functions of proteins is the growth and repair of muscle tissue (anabolism).

To understand all the intricacies of metabolism, it is necessary to study the molecular structure of proteins.

The structure of proteins and amino acids

Protein is made up of carbon, hydrogen, oxygen, and nitrogen. It can also contain sulfur, iron, cobalt and phosphorus. These elements form the building blocks of protein – amino acids. A protein molecule consists of long chains of amino acids linked by amide or peptide bonds.

Protein foods contain amino acids, the variety of which depends on the type of protein present. There are an infinite number of combinations of different amino acids, each of which characterizes the properties of a protein.

While different combinations of amino acids determine the properties of a protein, the structure of individual amino acids affects its function in the body. An amino acid is made up of a central carbon atom in the center of the positively charged amine group NH2 at one end and a negatively charged carboxylic acid group COOH at the other. Another R group called the side chain determines the function of the amino acid.

Our body requires 20 different amino acids, which, in turn, can be divided into separate groups. The main sign of separation is their physical properties.

The groups into which amino acids are divided can be as follows.

one. Substantial (EAA). They are also called irreplaceable because the body is not able to produce them on its own. You can get these amino acids from food.

This group includes amino acids such as

2. Non-essential (NEAA) or non-essential. Amino acids in this group are produced by your body. For a full-fledged metabolism, they are no less important than essential.

However, if several defective proteins are combined, then it is possible to collect all the essential amino acids that make up a complete protein.

During digestion, the cells of the gastric mucosa produce pepsin, the pancreas produces trypsin, and the small intestine produces chymotrypsin. The release of these enzymes triggers a protein breakdown reaction into peptides.

The peptides, in turn, are broken down into free amino acids. This is facilitated by enzymes such as aminopeptidases and carboxypeptidases.

Then free amino acids are transported through the intestine. Intestinal villi are covered with a monolayer epithelium, under which blood vessels are located. Amino acids enter them and are carried throughout the body by the blood to the cells. After that, the process of assimilation of amino acids starts.

It is the removal of amino groups from a molecule. This process occurs mainly in the liver, although glutamate is also deanimated in the kidneys. The amino group removed from amino acids during deanimation is converted to ammonia. In this case, carbon and hydrogen atoms can then be used in the reactions of anabolism and catabolism.

Ammonia is harmful to the human body, so it is converted into urea or uric acid by enzymes.

Transanimation is the reaction of transferring an amino group from an amino acid to a keto acid without the formation of ammonia. The transfer is carried out due to the action of transaminase – enzymes from the group of transferases.

Most of these reactions involve the transfer of amino groups to alpha-ketoglutarate, forming new alpha-ketoglutaric acid and glutamate. An important transaminase reaction is the branched-chain amino acids (BCAAs), which are absorbed directly in the muscles.

In this case, the BCAAs are removed and transferred to alpha-ketoglutarate, which forms branched keto acids and glutamic acid.

Usually, amino acids are involved in transanimation, which are found most in tissues – alanine, glutamate, aspartate.

The amino acids that enter the cells are used for protein synthesis. Every cell in your body needs a constant exchange of protein.

If you represent this reaction in the form of a formula, it will look like this.

The largest amount of protein in the body is found in the muscles.

Therefore, it is logical that if your body receives more protein in the process of protein metabolism than it loses, then there will be an increase in muscle mass. If in the process …