Description of the problem 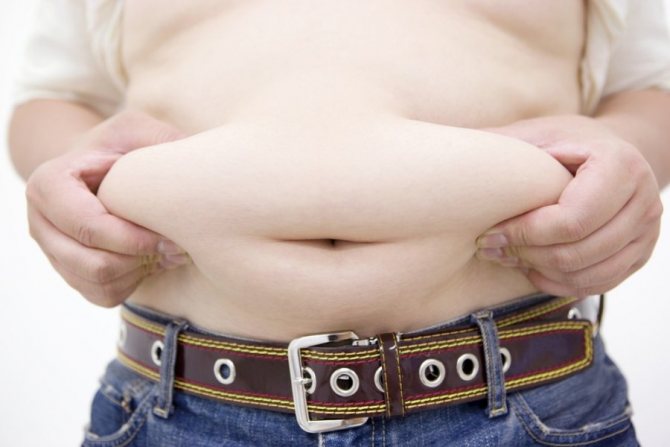 Big belly in a man

The belly grows not only in women. Often men in the 30+ category complain about the “beer belly”, but the ladies say that there is an “apron” on their belly. Whatever you call it, the problem is hard to ignore. You can’t put on a tight T-shirt anymore, going to the beach in a separate swimsuit is another challenge.

Many victims of such selective weight gain want to think that this is not because of nutrition, not because of physical inactivity, but for some other reason. In the course are excuses akin to “pranks the hormones”, “from stress” or “after childbirth, so at all.” Hormonal levels can indeed change.

But, let’s not deceive ourselves, due to illness, fat is not deposited on the stomach so often. Usually the fact is that the body is aging (and, as you know, this process begins after 25 years), the metabolism slows down, and your body can no longer react so briskly to buns, cakes and potatoes with meat. What gets away with at 18-20 becomes a problem closer to 30. Obesity is a problem of recent decades, associated primarily with malnutrition and low physical activity.

And here everything is simple: you get fat in the abdomen for three reasons. Or it is a hormonal imbalance, which is easy to check today by passing special tests. Or these are some diseases of internal organs, which can also be diagnosed. Or (which most often happens), you eat a lot and do not monitor your diet, and also do not devote proper time to sports.

Why does the belly grow in men

Often the expression “respectable man” suggests that the appearance of such an uncle is complemented by a weighty belly. But today, bellies are seen not only in the older generation. The belly is also growing in many young guys who, as it were, do not notice that their figure does not meet the standards of their age.

Where does this discrepancy come from, why does the belly grow, and what can complacency lead to about increasing its own volumes? After all, this is not only a problem of appearance, but also a medical problem. Such a belly will certainly affect the health of a man.

Causes of abdominal enlargement not related to the disease

The man’s body was originally designed for heavy loads. Moreover, he was destined by nature to experience physical stress and is in constant motion, getting food to feed the family, building a hut or beating a woman off an opponent with his fists.

Today, these features have dwindled. The biggest physical stress for many men is to carry the purchased groceries from the supermarket to the home. In addition, food has become varied and high-calorie, and activity is limited, including movement in public transport or your own car. Why doesn’t the belly grow out of the stored body fat, which is never used up?

The stomach grows due to improper nutrition

Not only the diet of a modern man itself raises questions, but also the mode of food consumption. Often, office workers stay at work overtime, and then, when they come home, eat both lunch and breakfast at night.

Also, the temptation to have another snack is the smells on the street, when a hamburger or pie, as it were, is not considered food, but is still deposited at the waist. What’s more, these foods are often very high in calories and are high in trans fats and carbohydrates. Often they are flavored with chemical flavors that cause increased appetite and do not bring satiety for a long time.

Snacks at work, provoked by colleagues, also contribute. In addition, there we can afford to drink an unlimited amount of sugary drinks such as coca-cola, fanta and other sweet soda.

Some nutritionists believe that the emergence of a beer belly is more provoked not by the consumption of beer itself, but by the absorption of fatty snacks with it.

For example, sausages or sausages with protruding fat will helpfully serve you with beer. Dried fish, snacks – all this will provoke thirst and prolong the banquet. And then retain water and create puffiness. If you have a predisposition to be overweight, then such a diet is completely contraindicated for you. After all, it has already been established that obesity can be inherited. So whether it is worth the risk is up to everyone to decide.

If such a feast does not threaten your friend, then a genetic predisposition can bring you an unpleasant surprise.

Growing belly due to lack of movement

It seemed that men had a reliable safety net from the abdominal muscles. They undeniably guarantee that they will keep their belly in great shape. The abdomen and back muscles prevent the intestines from stretching. But when the muscles weaken from the lack of active movement, then the intestines from the abundance of food begins to increase in size.

The muscle corset is not able to support the abdomen, and it falls out for all to see. Others understand that this person is not starving.

It is especially difficult to regain shape after fifty, when a sedentary lifestyle, laziness and physical inactivity lead the body to age-related diseases: atherosclerosis, vascular dystonia and banal obesity. The breakdown of fats at this age slows down, and there is a lack of oxygen in the blood. As a result, shortness of breath, snoring, heart attack appears. This all occurs against the background of an increase in abdominal fat, which presses on the diaphragm and changes the position of the heart in the chest.

Slowing down metabolism with …